:
The Peruvian creole cattle (PCC) is a neglected breed and an essential livestock resource in the Andean region of Peru. To develop a modern breeding program and conservation strategies for the PCC, a better understanding of the genetics of this breed is needed. We sequenced the whole genome of the PCC using a de novo assembly approach with a paired-end 150 strategy on the Illumina HiSeq 2500 platform, obtaining 320 GB of sequencing data. A reference scaffolding was used to improve the draft genome. The obtained genome size of the PCC was 2.81 Gb with a contig N50 of 108 Mb and 92.59% complete BUSCOs. This genome size is similar to the genome references of Bos taurus and B. indicus. In addition, we identified 40.22% of repetitive DNA of the genome assembly, of which retroelements occupy 32.39% of the total genome. A total of 19,803 protein-coding genes were annotated in the PCC genome. For SSR data mining, we detected similar statistics in comparison with other breeds. The PCC genome will contribute to a better understanding of the genetics of this species and its adaptation to tough conditions in the Andean ecosystem.
Dataset: The genome sequence is openly available in the Genbank of NCBI under the accession number JANIWY000000000 (https://www.ncbi.nlm.nih.gov/nuccore/JANIWY000000000.1 accessed on 4 October 2022). The associated Bioproject, Biosample, and Sequence Read Archive (SRA) numbers are PRJNA849594, SAMN29095626, and SRS13407845, respectively.
Dataset License: CC0
Keywords:
NGS; neglected breed; genome; reference scaffolding; microsatellites

The whole genome sequencing data was deposited in the SRA database under code number SRS13407845, Biosample SAMN29095626, and Bioproject PRJNA849594. The total number of raw pair reads was 854,737,766 sequences, with an average length of 150 bp, a GC content of 44%, and a total sequencing data output of 320 GB. After the trimming, we retained 88.2% of sequencing data, and more than 790 million high-quality sequence reads with approximately 281.6 GB of total sequencing data were generated. No over-represented sequences and adapters were found. In addition, the average quality per read was 40.

We used gene prediction methods (ab initio prediction and homology-based search) to annotate the protein-coding genes in the draft genome, resulting in 19,803 annotated protein-coding genes. We found that our assembly and annotation (19,803 protein-coding genes) is not as complete as that of the B. taurus reference genome (ARS-UCD1-HerefordGenbank, GCF_002263795.1), which had 21,039 protein-coding genes. On the other hand, we identified 897,585,367 bp retroelements, corresponding to 32.29% of the assembled PCC draft genome. The most abundant repetition was the LINES type, which represented 28.55% of the total assembly. In addition, we identified other types of repetitive DNAs: the RTE/Bov-B type (16.32%) and L1/CIN4 (10.51%). Notably, 3.48% of repetitive unclassified DNA was found, and 37.38% of the total assembled genome has been classified as a total interspersed repeat (Table 4).

In summary, we reported the first draft genome of the Peruvian creole cattle. Our draft genome is very similar to other reported draft genomes of B. taurus. In addition, we generated information about SSR which will be employed in the near future for population genetics and diversity studies. Since there are limited genomic sequence resources for the PCC, our study hopes to provide a reference for animal improvement programs for this important livestock resource.

We collected hair samples from the tail of a single male specimen from Andagua, Arequipa (3574 MASL; −15.499548°, −72.359927°). Since this individual possessed most of the classical characteristics of Peruvian creole cattle, we decided to select it for this study. We extracted genomic DNA with the Wizard Genomic DNA Purification Kit (Fitchburg, WI, USA) following the manufacturer’s instructions. The quality and quantity of genomic DNA were assessed using agarose gel electrophoresis and a Qubit 2.0 Fluorometer (ThermoFisher Scientific, Waltham, MA, USA), respectively. The mitochondrial genome of this individual was recently sequenced [20].

We used a library with 300 bp insert size and paired-end-tag DNA sequencing using the Illumina HiSeq 2500 platform, generating around 2x151 bp reads. A reference-scaffolding approach was used to improve the draft genome, and the raw reads were checked by FastQC v.0.11.9 [28]. In addition, trimming quality (Phred Q > 25) and remotion of adapters were conducted with Trimmomatic v0.36 [29] and TrimGalore software [30], respectively. For the genomic survey, we used Jellyfish v.2.0 [31]. Genome Scope v1.0.0 (Cold Spring Harbor Laboratory, Laurel Hollow, NY, USA) [32] was employed to estimate the features of the genome, including genome size, repeat content, and heterozygosity rate, using the output of Jellyfish and the number of 17-mer for k-mer analysis. K-depth was estimated to identify a common single-peak pattern in the k-mer frequency distribution analysis.

De novo assembly was performed with two assembly algorithms: SOAPdenovo2 v.2.04 [26] and MaSuRCA v.4.0.6 [27]. Next, we used QUAST v.5.2.0 [33] for statistics of assemblies. MaSuRCA resulted in improved assembly statistics and was subjected to Samba scaffolder v.1.0 [34] for scaffolding and gap-filling. For the reference-based scaffolding, we used a reference genome of B.taurus (Genbank: GCA_002263795.3) since this is the last updated genomic tool for this species. Next, we used QUAST with the output of the scaffolding. Validation of assembly was assessed using three different approaches: (i) filtered PE Illumina reads were remapped to detect errors in the assembly using Bowtie2 v.2.4.2 [35] and SamTools v.1.7 [36] software, (ii) the BUSCO [37] strategy was used to test the completeness of the genome assembly and gene space, using the mammalian-specific profile—this approach makes use of single-copy genes expected to be present in mammals (4104 genes)—and (iii) available B. taurus genomic resources such as CDS (coding DNA sequences) and PacBio transcriptomes data were used to map back to the draft genome using GMAP v.2021.08.25 [38]. We used JCVI VecScreen (https://github.com/tanghaibao/jcvi accessed on 5 July 2022), which uses Univecdatabase (https://ftp.ncbi.nlm.nih.gov/pub/UniVec/ accessed on 20 July 2022) to detect vectors, and mapped the scaffolds against the nt/nr NCBI database (https://www.ncbi.nlm.nih.gov/ accessed on 10 July 2022) using BLAST v.2.2.26 [39] for identifying contamination. The mitochondrial sequences were separated after BLAST searches against databases of mitochondrial sequences. Finally, we removed contaminated scaffolds and vectors to submit to the NCBI database. This assembly has been deposited at DDBJ/ENA/GenBank under the accession number JANIWY000000000.

To identify repetitive elements, we used de novo and homolog-based methods. For the de novo approach, we used Repeatmodeler [40] to generate a de novo PCC repeat library, which is subsequently used in RepeatMasker v4.0.7 [41] to annotate repeats. For the homology-based approaches, we used Repbase v4.0.7 [42], RepeatMasker, and RMBlastv2.2.27 [43]. All repeat results were merged. Final genome assembly was repeat-masked using the library repeats using RepeatMasker. MAKER [44] was run on the repeat-masked genome with SNAP [45] and AUGUSTUS [46]. For evidence to guide the annotation process, we retrieved ESTs of B. taurus from the NCBI database (ftp://ftp.ncbi.nih.gov/repository/dbEST/ accessed on 13 July 2022) and proteomes of the Bovidae species B.taurus (Refseq: GCF_002263795.2), B. indicus (Refseq: GCF_000247795.1), and B. mutus (GCF_000298355.1). MAKER software was run iteratively two times; the predictions were curated against a high-quality protein database of UNIPROT (https://www.uniprot.org/ accessed on 15 July 2022) using BLAST with an E-value of 1 × 10-5.

The following supporting information can be downloaded at: https://www.mdpi.com/article/10.3390/data7110155/s1, Table S1: Statistics of the completeness of the assemblies from SOAPdenovo2 and MaSuRCA of the Peruvian creole cattle genome. Table S2: Motif percentage of SSR in cattle breeds.

The sample collection from the cattle specimen was conducted in accordance with the Peruvian National Law No. 30407: “Animal Protection and Welfare”.

Written informed consent was obtained from the owner of the bull studied here.

All data generated during this study are included in this published article.

The authors thank Family Ojeda from Arequipa who kindly provided hair samples of their bull for this work, and we also thank Jerry Valdeiglesias and Fernando Gomez for the logistic support in Arequipa. We appreciate the comments of the anonymous reviewers that greatly improved our manuscript. In addition, we thank Ivan Ucharima, Maria Angélica Puyo, Cristina Aybar, and Erick Rodriguez for supporting the logistic activities in the laboratory. Finally, the authors thank the Bioinformatics High-Performance Computing server of Universidad Nacional Agraria la Molina for providing resources for data analysis. 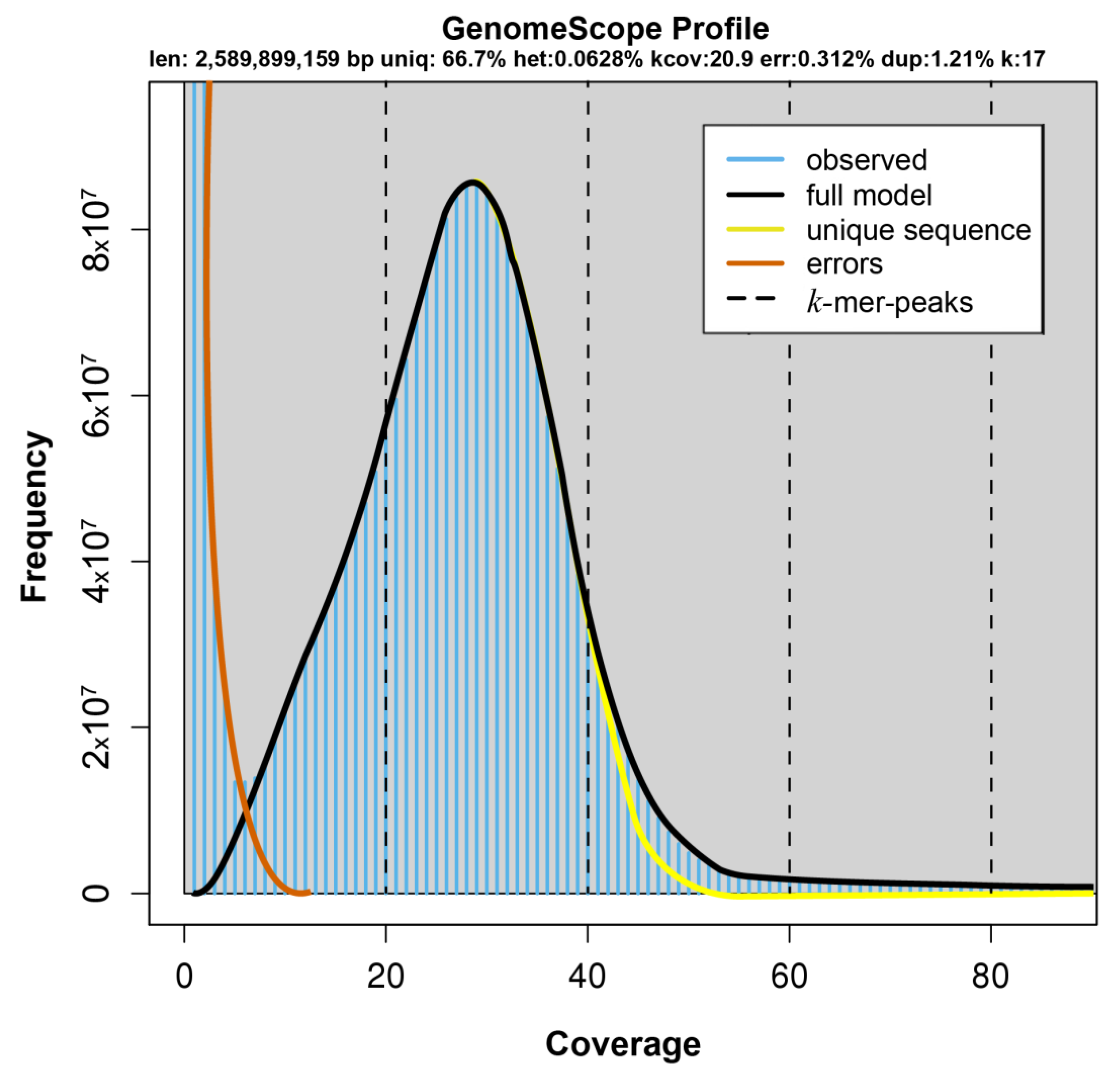