Novel primary sources of one of the world’s leading anticancer agent, paclitaxel, as well as of other antineoplastic taxanes such as 10-deacetylbaccatin-III, are needed to meet an increasing demand. Among the Taxus species the promise of Taxus baccata L. (European or English yew) has been documented. In this study, the metabolite analysis of two marginal T. baccata populations in Greece (Mt. Cholomon and Mt. Olympus), located at the southeastern edge of the species natural distribution, are being explored. A targeted liquid chromatography – mass spectrometry (LC-MS/MS) analysis was used to determine the content of 10-deacetylbaccatin III, baccatin III, 10-deacetyltaxol, paclitaxel and cephalomannine in the needles of each of the populations from three sampling periods (spring, summer and winter). This is the first survey to generate a taxane targeted metabolite data set, since it derives from Hellenic natural populations that have not been explored before. Furthermore, it has used an extensive sample design in order to evaluate chemodiversity at the population level. The analysis revealed significant levels of chemodiversity within and among the investigated populations and significant seasonal variation that could be exploited for the selection of superior germplasm native to Greece, for yew plantations and further exploitation which is necessary for the production of important taxanes. View Full-Text
Keywords: Taxus baccata; Metabolites; LC-MS/MS; Taxanes; Yew Taxus baccata; Metabolites; LC-MS/MS; Taxanes; Yew
►▼ Show Figures 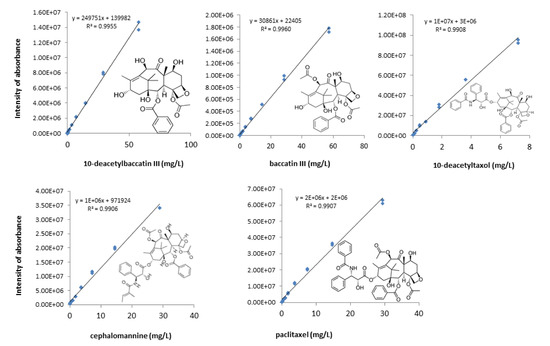