Mapping of Sewer Lines Using GPR: A Case Study in Tunisia
Next Article in Special Issue

A System for Acquisition, Processing and Visualization of Image Time Series from Multiple Camera Networks

:
Binary star DataBase (BDB) is the database of binary/multiple systems of various observational types. BDB contains data on physical and positional parameters of 260,000 components of 120,000 stellar systems of multiplicity 2 to more than 20, taken from a large variety of published catalogues and databases. We describe the new features in organization of the database, integration of new catalogues and implementation of new possibilities available to users. The development of the BDB index-catalogue, Identification List of Binaries (ILB), is discussed. This star catalogue provides cross-referencing between most popular catalogues of binary stars.
Keywords:
astronomical data bases; catalogues; binaries: general; cataclysmic variables

The Binary star DataBase (BDB, bdb.inasan.ru) is the development of the original database constructed at the Besancon Observatory [1]. Later BDB was moved from Observatoire de Besançon to the Institute of Astronomy of the Russian Academy of Sciences [2,3]. BDB contains information about binary/multiple stars of all known observational types taken from several dozens of original catalogs of binary stars. Collection, parsing and indexing of principal catalogues for all types of binaries are described in [4,5,6]. Within the framework of the BDB, cross-identification of the objects included in it was completed and a three-level identification system Binary Star Data Base (BSDB) and a catalogue of object identifiers in double and multiple systems, Identification list of binaries (ILB), were created, which made it possible to uniquely identify the systems, pairs and components, included in BDB. The search for objects in the database is possible both with the identifier (all major identification systems are supported) and by parameters. BDB contains data on the physical and observational parameters of about 260,000 components included in about 120,000 systems with a multiplicity of 2 to more than 20. New functionality and advancement of BDB was recently discussed in [7]. The aim of this work is to describe in more details recent improvements that have been made in BDB, discuss its development and new possible applications of BDB.
BSDB identification system and ILB are briefly described in Section 2 and Section 3, respectively. Observational types of binaries, included in BDB, are considered in Section 4. In particular, there we discuss cataclysmic binaries. Connection with external databases are described in Section 5.

Support of data on a large number of heterogeneous, but intersecting observational types of stars (see Section 4) required conducting of a thorough cross-identification and construction of a new identification system, BSDB. The BSDB scheme covers all types of observational data. Three classes of objects introduced within the BSDB nomenclature provide correct links between objects and data, what is especially important for complex multiple stellar systems. Within BDB, the entire system, the pair and the component have their unique BSDB identifier. In particular, BSDB is resistant to cases when a component is itself resolved into sub-components, and when a new (distant) component of a system is discovered. In these cases BSDB allows do not change the identification data and to link information from sources (catalogues) having different spatial resolution. Processing of the addition of new components, as well as details of BSDB construction and application are described in [8].
The principles underlying the BSDB identifier compilation do satisfy the “IAU Specifications concerning designations for astronomical radiation sources outside the solar system”. The problems typical of binary/multiple-star designation schemes are basically avoided by the BSDB.

The Identification List of Binaries (ILB) is a star catalogue constructed to facilitate cross-referencing between different catalogues of binary stars. ILB is based on the BSDB identification system (see Section 2), and ILB underlies the BDB search engines.
ILB represents a table of identifications (or running numbers) of double/multiple systems, pairs and components from the following catalogues (designation schemes): BSDB, Bayer/Flemsteed, DM (BD/CD/CPD), HD, HIP, ADS, WDS, CCDM, TDSC, GCVS, SBC9, IGR (and some other X-ray catalogues), PSR and Discoverer and number designation (DD). Description of all these designations can be found in the Dictionary of Nomenclature of Celestial Objects (http://cds.u-strasbg.fr/cgi-bin/Dic-Simbad). Coordinates (together with their source code) are also given for each component. For each pair, ILB provides information on its observational type(s).
The content of BDB is not limited to data included in ILB. Having found the necessary objects according to the data available in ILB, the user can obtain all the information related to the objects from the original catalogs (copies of which are integrated into BDB). However, BDB does not perform any filtering or data evaluation, providing the user with maximum of available information.
ILB currently contains about 520,000 entries: 120,000 systems, 140,000 pairs and 260,000 components. ILB is regularly updated, improved (bugs and errors are fixes) and expands as new catalogues are added to BDB. Identification List of Binaries is described in detail in [9], and problems of matching and verification of multiple stellar systems in ILB are discussed in [10,11,12].

Cataclysmic variables (CV) are close binaries, undergoing mass transfer and exhibiting sudden outbursts, generally arising either from the release of gravitational energy through accretion or from thermonuclear processes.
Currently we include cataclysmic variables in BDB. Main sources of that observational type of binaries are Catalogue of Cataclysmic Binaries, Low-Mass X-Ray Binaries and Related Objects (Edition 7.24, 31 December 2015–The Final Edition) [15], Catalog of Cataclysmic Variables (Ver. 2011–2006) [16], and General Catalogue of Variable Stars (Ver. GCVS 5) [17]. The three catalogues contain 1429, 1830 and 938 CV, respectively, and some of CV are included in more than one catalogue. Some tens of CV are included in only one of three catalogues.
We have carried out a cross-identification of CV in the three catalogues and have made a search of these objects in Simbad. It should be noted that by no means all catalogued CV are included in Simbad. Altogether 617 CV are included both in three catalogues and in Simbad.
Sometimes CV are observed also as binaries of other types. Among the studied catalogues, only [15] contains indication of eclipsing or/and spectroscopic binarity for the catalogued CV. Some of objects, catalogued in [16], are in fact non-CV.
Besides the cataclysmic binaries, [15] contains low-mass X-ray binaries and related objects. Low-mass X-ray binaries from [15] were included in BDB earlier (see [18]), while related objects are being included in BDB at this stage. There are 619 such objects in [15], and we designate them as pre-CV objects.
We should note that there is a number of other lists of CV published in literature, however we currently discard them for one or more of the following reasons: (i) they contain too few objects, (ii) they contain just candidates to CV, (iii) they provide too scarce information on the catalogued objects.

4.2. Other Observational Types of Binaries

Some observational types of binaries are not yet included in BDB and, consequently, are not discussed in the current paper. Among them are
All of these types are relatively small and contain no more than a couple of hundred (two former types) or just a dozed (the others) of objects.

Additional information on binary/multiple stars can be obtained from other databases/catalogues. We have established links to general purpose databases: Simbad, VizieR, ADS. Corresponding buttons appear in the BDB resulting page, and one can get information on the queried objects from the databases.
Besides, we plan to establish links to databases/catalogues of binaries of particular observational type: WDS [19] for visual binaries, SB9 [20] for spectroscopic binaries, CEV [21] for eclipsing binaries, etc.

The authors made equal contribution to this work; O.M. wrote the paper.

This research was partly funded by the Russian Foundation for Basic Research grant 16-07-01162 and the Presidium of the Russian Academy of Sciences Program P 28.

We are grateful to our reviewers whose constructive comments greatly helped us to improve the paper. 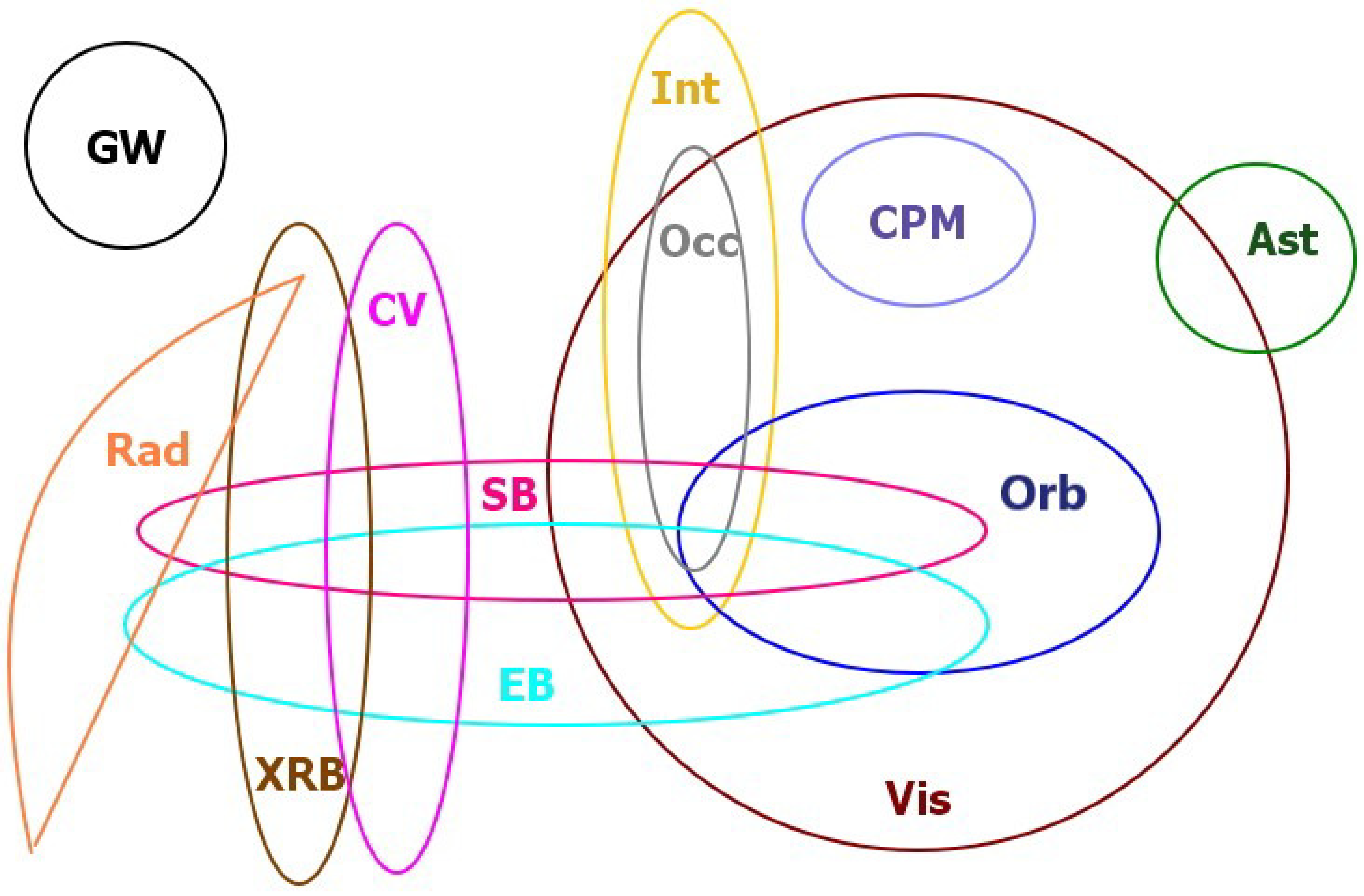