Age-related macular degeneration (AMD) affects 11 million patients in the United States and is the leading cause of visual disability in industrialized countries [1]. A subtype of AMD, wet AMD (neovascular AMD), is characterized by abnormal growth of vessels in choroidal and retinal circulations promoted by vascular endothelial growth factors (VEGF) [2]. Neovascularization coupled with high vascular permeability leads to macular edema or hemorrhage and eventual visual impairment [3].
Anti-VEGF is the most common treatment paradigm for wet AMD and many other retinal diseases, including proliferative diabetic retinopathy and retinal vein occlusions [4]. Current anti-VEGF therapies require regular intravitreal injections that are associated with sight-threatening complications including endophthalmitis [5]. Administration routes alternative to intravitreal injections such as topical administrations have been unsuccessful to date due to the difficulty in reaching choroidal blood vessels [6]. Recently, a new promising strategy has emerged capitalizing on the sustained release of anti-VEGF agents to the posterior segment of the eye, employing implants, nano-formulations, and hydrogels [6]. While the results of research in the area are encouraging [6], wet AMD therapies are still faced with significant challenges in their inherent bioactivity, payload quantity, targeted delivery, sustained release, biocompatibility, and optical clarity; therapeutics which successfully address these shortcomings will have improved performance and will result in better long-term patient outcomes.
Peptide-based hydrogels successfully address many of the challenges above, and additionally are readily synthesized at low-cost and high purity, can be conjugated to other polymers, fluorophores or chemical moieties in a straightforward manner to alter or improve their physical properties, can be modified to be persistent, biodegradable or responsive to stimuli, and can serve as excellent biomimetic scaffolds—all characteristics which prime their use as biomaterials for medical applications [7,8,9,10,11,12,13,14]. While many strategies developing covalently crosslinked hydrogels have shown great potential in the biomedical field [15,16,17,18,19,20], non-covalently crosslinked hydrogels, whose assembly and structure are solely guided by weak supramolecular interactions, confer additional advantages such as self-healing, high elasticity, and shear thinning [10,17,21]. Rational design of the base peptide sequence governs both the final structure and the inherent functionality of the final material, while the ability to easily tune peptide sequences facilitates modularity in these platforms [10,22,23,24,25]. Multi-domain peptide MDP hydrogels exemplify many of the characteristics above and are composed of an alternating A-B-A sequence motif, where the terminal A blocks contain either positively or negatively charged amino acids (ex. K/R or E/D), and the B midblock domain contains a repetitive beta-sheet domain of alternating hydrophobic and hydrophilic amino acids (ex. (SL)6) [23,24,26,27,28]. Upon aqueous dissolution, beta-sheet monomers spontaneously associate into dimers to exclude solvent and form a hydrophobic core (Figure 1) while hydrophilic residues associate with solvent. Further assembly of dimers produces short fibers, though significant anisotropic fiber extension is prevented by the proximity of many charged A domains [29,30,31]. Subsequent addition of charged ions, drugs or other polymers facilitates terminal charge shielding in these domains and allows for unidirectional fiber extension as well as three-dimensional intertangling of multiple fibers, ultimately giving rise to stiff, optically clear, thixotropic hydrogels [23,27,32,33,34,35,36]. While this base sequence has shown excellent promise as a scaffold for wound healing, drug delivery and tissue regeneration [24,26,27,28,32,35,36,37,38], additional functionality can be incorporated by appending short epitopes at one of the termini, generating new A-B-A-C-type hydrogels which can be used to promote neurogenesis or dentinogenesis, modulate inflammation, reduce bacterial load or regulate lipoprotein homeostasis [39,40,41,42,43,44]. Of these designer hydrogels, versions which are either pro- or anti-angiogenic have recently shown great potential for tissue regeneration in several disparate biomedical applications [40,43,45,46,47,48,49,50].
In this study, we investigated the preclinical efficacy of two novel peptide hydrogels, one containing a pro-angiogenic [43] motif and the other an anti-angiogenic motif in a rat wet AMD model (Figure 1) [6]. Both novel peptide hydrogels demonstrate biocompatibility, targeted delivery, sustained release, and optical clarity—important design criteria for biomaterials for wet AMD treatment. Surprisingly, the overall efficacy of the pro-angiogenic peptide hydrogel was significantly improved compared to the anti-angiogenic peptide hydrogel, and its performance was found comparable to Aflibercept (Eylea®), an approved treatment for wet AMD. Our results suggest a possible new protective role of VEGF in stabilizing neovascularization and reducing vascular permeability in wet AMD.

Pro-angiogenic peptide SLan (peptide sequence K(SL)6K–G–KLTWQELYQLKYKGI) and anti-angiogenic peptide SLKr5 (peptide sequence K(SL)6K–G–PRKLYDY) were synthesized with a CEM LibertyBlue solid phase peptide synthesizer using standard Fmoc chemistry. Peptide purity was verified >85% by an Agilent 1100 series HPLC instrument with an Agilent (Santa Clara, CA, USA) C3 reverse phase column, and products were monitored by UV at 280 nm. The identity of the peptides was verified with an Orbitrap Q Exactive LC/MS (Thermo Scientific, Waltham, MA, USA) instrument. Lyophilized pro-angiogenic and anti-angiogenic peptides were formulated as gels with the addition of 298 mM sucrose and passed through a 0.22 um filter for sterilization, and multivalent counterions (PO43−) in 1X PBS (autoclaved), to maintain osmolarity, shield charges, and form salt-bridges between the terminal lysines of the peptides. Note: Sterile filtering should not affect the overall structure of the peptides or hydrogels, as the gel is formed through non-covalent interactions as it self-assembles. Chemical characterization of the pro-angiogenic peptide has been previously reported [43]. Optical transparency of gels was observed during optical imaging in the eye; optimization of imaging with trial eyes led to the choice of concentrations used, which were noted to be optically transparent both in vivo and in vitro. Two concentrations of anti-angiogenic peptide hydrogel (low concentration—0.02 wt% and high concentration—0.2 wt%) and one concentration of pro-angiogenic peptide hydrogel (1.0 wt%) were thereby selected to proceed with in vivo studies because these hydrogels remain optically clear at these concentrations.

2.3. Analysis of Choroidal Neovascularization Lesions with In Vivo Imaging

To determine the preclinical efficacy of pro-angiogenic and anti-angiogenic hydrogels, the CNV lesions were monitored using spectral-domain optical coherence tomography (SD-OCT) and fluorescein angiography (FA) at baseline on day 0 (after lasering), and at follow-up days 3, day 7, and day 14 (end of the study period). Rats received subcutaneous injections of 1 mL of 5% fluorescein sodium salt (Sigma-Aldrich Finland Oy, cat. No. F6377), as is typical for rodents [51,52,53]. Vascular leakage was examined using a Heidelberg Spectralis HRA2 system (Heidelberg Engineering, Germany). CNV lesions and retinal thickness were monitored using an Envisu R2210 SD-OCT system (Bioptigen Inc./Leica Microsystems, Morrisville, NC, USA). For imaging, the rat was placed into the holder and the imaging systems aligned with the first infrared reflectance image taken from the system, then sodium fluorescein was administered and consecutive FA images taken every 60 s from the retinal and choroidal focus level for a period of 5 min from the sodium fluorescein injection. Qualitatively, lasered spots were evaluated based on the presence or absence of a retinal vascular leak. The presence of CNV was identified from lasered spots that have a leakage as observed by comparing the dynamics of the fluorescein signal in a series of fundus FA images. SD-OCT imaging was used as a secondary confirmation of CNV or in questionable FA, where the presence of intraretinal fluid in SD- OCT images would suggest the presence of CNV. Quantitatively, vascular leakage was measured using FIJI (v. 2.0) software by outlining the area of vascular leak manually from the last FA image of each imaging session. All researchers were blinded on the treatment each animal received during measurement.

Quantitative data were plotted, analyzed, and presented as mean ± standard deviation (SD) or standard error of mean (SEM). Lesion size as well as leakiness was compared within each group and between each group, and accordingly, parametric data was analyzed using one-way ANOVA test, while non-parametric data was analyzed using Kruskal–Wallis ANOVA. Multiple comparison tests were performed as appropriate, and data with common Greek symbols showed no statistical significance at p < 0.05 level.

Therapeutic utility and tolerability were evaluated in the rat laser-induced choroidal neovascularization model, a commonly used animal model for wet AMD [54]. No adverse reactions due to the study compounds were observed. Animals were monitored for any notable changes in body weight and animal behavior, as well as signs of inflammation in the eye for the duration of the study period. Rat weight was not affected by the treatments (p = 0.542, Supplemental Figure S1), and no redness, swelling or loss of function was noted in any of the eyes, nor were any gross morphology changes noted. At the time of explant, gross observation of animal and organs revealed no untoward observation. We observed optical transparency of gels during optical imaging in the eye; optimization of imaging with trial eyes led to the choice of concentrations used, which were noted to be optically transparent both in vivo and in vitro.

All animal studies were in accordance with State and Federal Guidelines and approved by the IACUC committee of Experimentica Ltd. (Chicago, IL, USA).

The data presented here are available on request from the corresponding author.

V.A.K. has equity interests in start-up companies attempting to translate peptides from this technological platform. 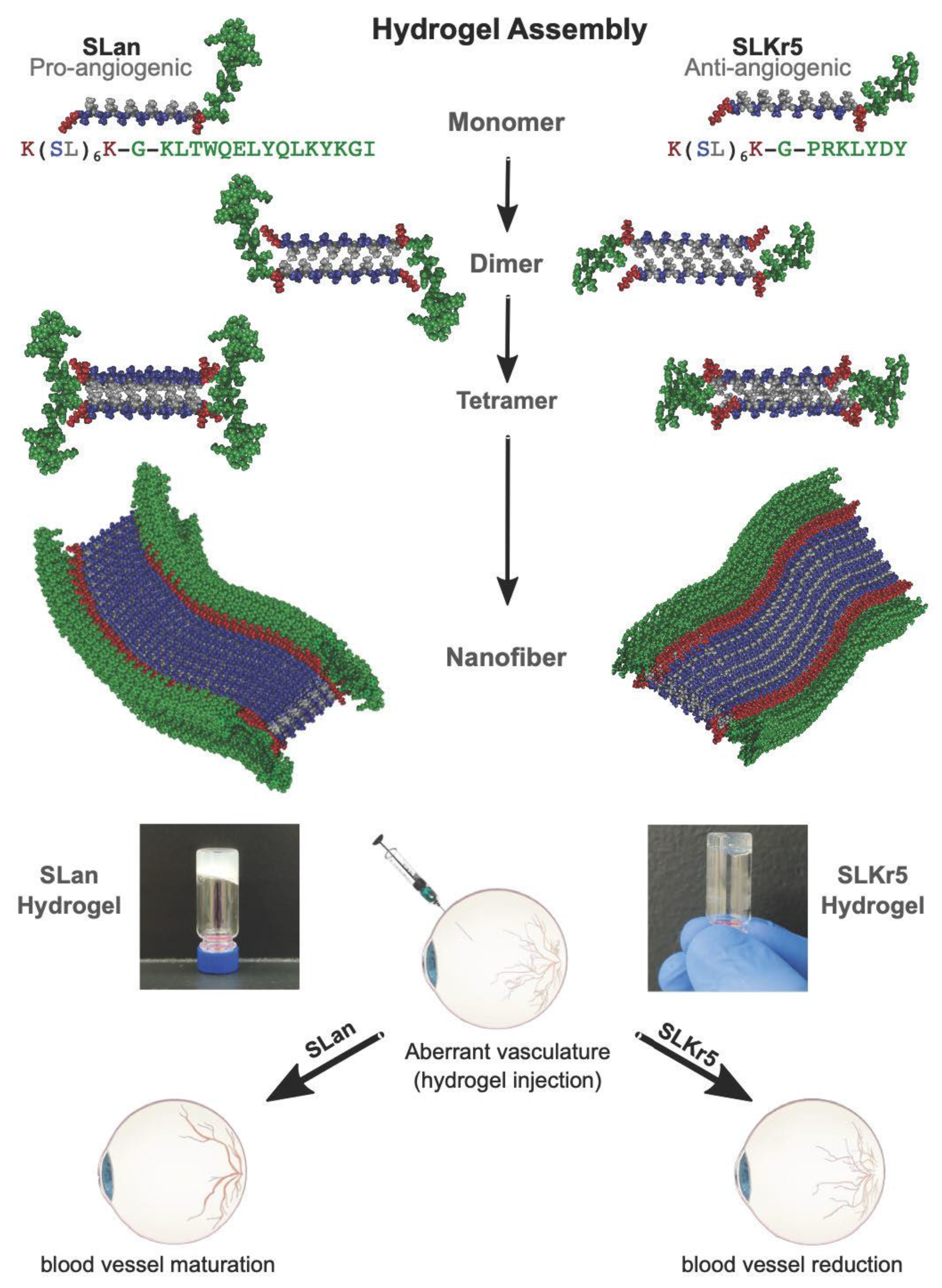 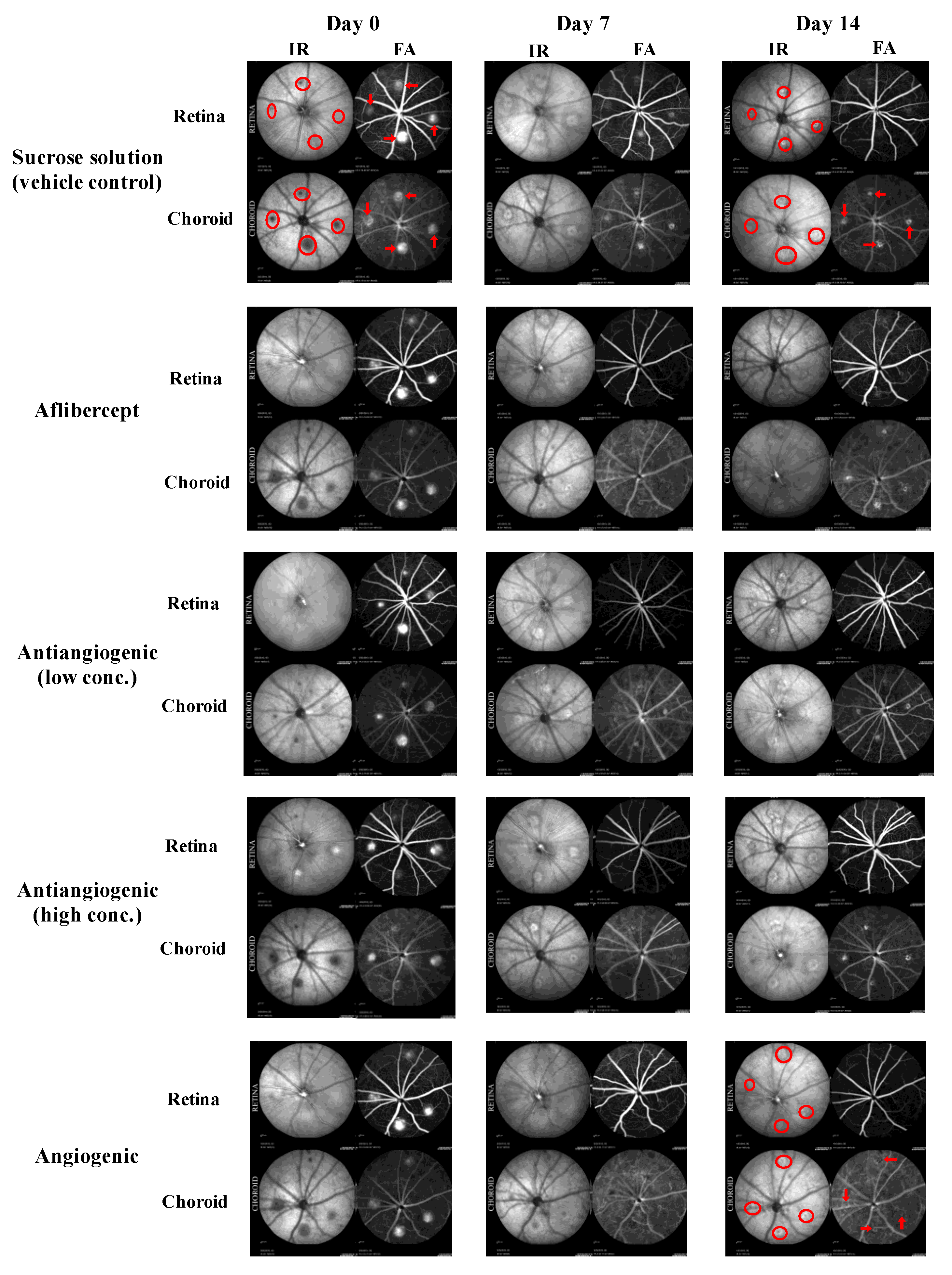 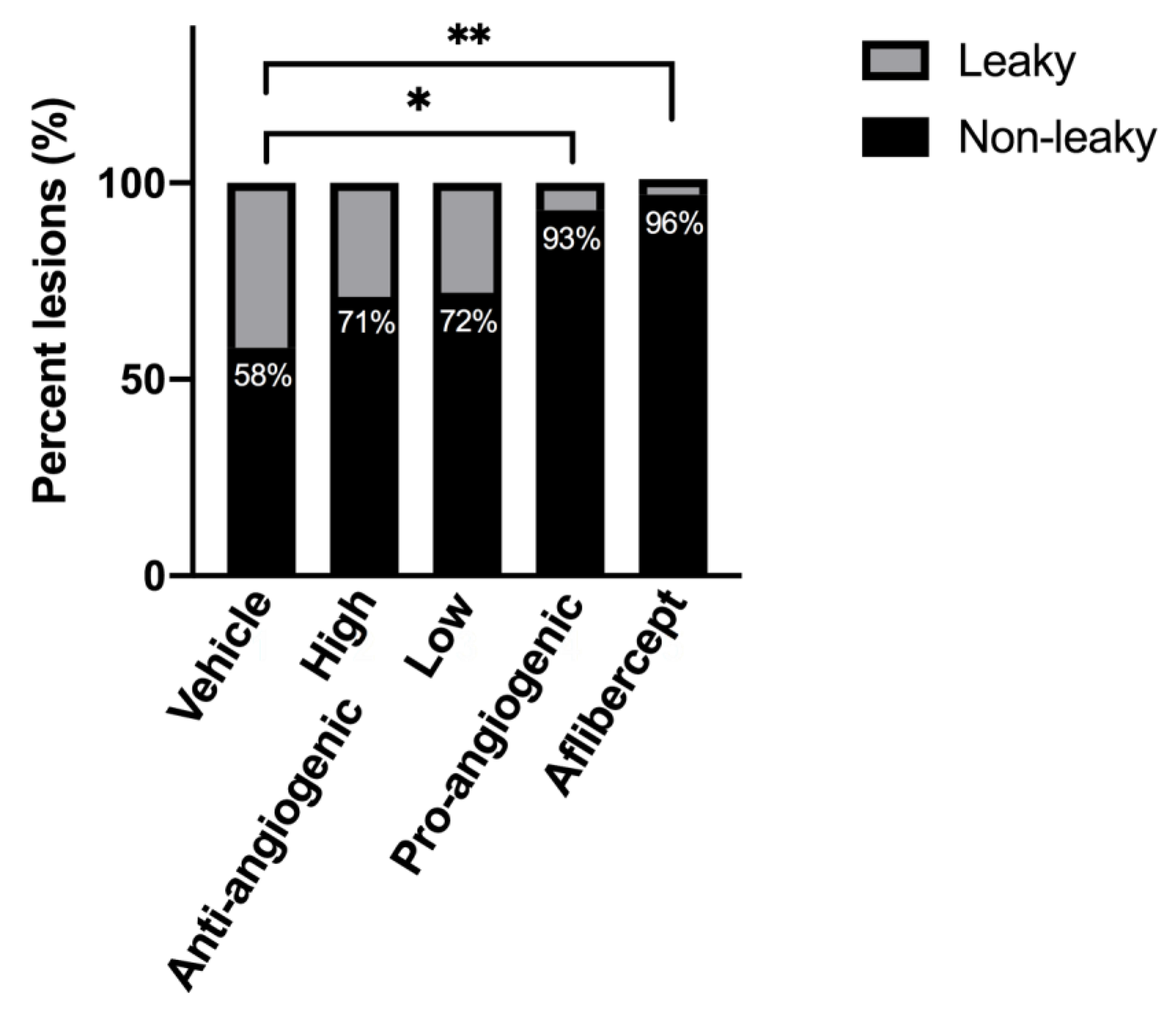 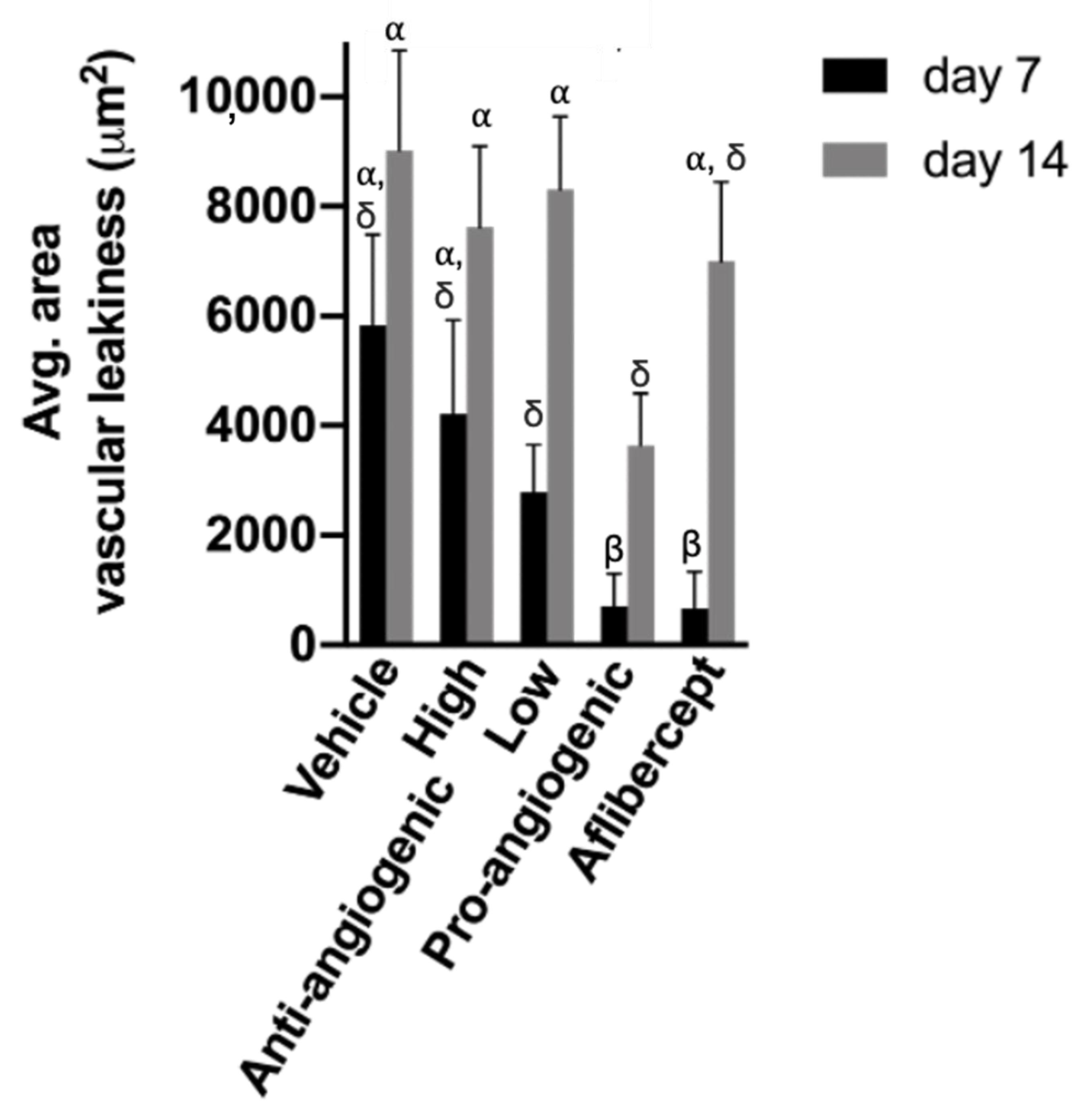