Influence of Liquid-to-Gas Ratio on the Syngas Fermentation Efficiency: An Experimental Approach
Previous Article in Journal

Techno-Economic Assessment of Bio-Syngas Production for Methanol Synthesis: A Focus on the Water–Gas Shift and Carbon Capture Sections

The biomass-to-methanol process may play an important role in introducing renewables in the industry chain for chemical and fuel production. Gasification is a thermochemical process to produce syngas from biomass, but additional steps are requested to obtain a syngas composition suitable for methanol synthesis. The aim of this work is to perform a computer-aided process simulation to produce methanol starting from a syngas produced by oxygen–steam biomass gasification, whose details are reported in the literature. Syngas from biomass gasification was compressed to 80 bar, which may be considered an optimal pressure for methanol synthesis. The simulation was mainly focused on the water–gas shift/carbon capture sections requested to obtain a syngas with a (H2 – CO2)/(CO + CO2) molar ratio of about 2, which is optimal for methanol synthesis. Both capital and operating costs were calculated as a function of the CO conversion in the water–gas shift (WGS) step and CO2 absorption level in the carbon capture (CC) unit (by Selexol® process). The obtained results show the optimal CO conversion is 40% with CO2 capture from the syngas equal to 95%. The effect of the WGS conversion level on methanol production cost was also assessed. For the optimal case, a methanol production cost equal to 0.540 €/kg was calculated. View Full-Text
Keywords: biomass gasification; bio-methanol; process simulation; carbon capture; economic analysis biomass gasification; bio-methanol; process simulation; carbon capture; economic analysis
►▼ Show Figures 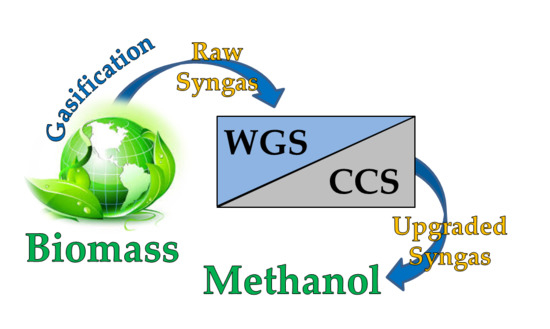