Regenerative Medicine: A Review of the Evolution of Autologous Chondrocyte Implantation (ACI) Therapy
Next Article in Special Issue

Introducing the Language of “Relativity” for New Scaffold Categorization

Erectile dysfunction (ED) affects more than 30 million men; endothelial dysfunction plays a significant role in EDs pathogenesis. The aim of this study was to administer mesenchymal stem cells (MSC) derived from adipose tissue and platelet lysate (PL) into patients with erectile dysfunction. This pilot study enrolled eight patients with diagnosed ED. Patients enrolled were suffering from organic ED due to diabetes melitus, hypertension, hypercholesterolaemia, and Peyronie disease. The patients were distributed in 2 groups. Patients in group A received adipose derived mesenchymal stem cells (ADMSC) resuspended in PL while patients in group B received only PL. ADMSCs were isolated from patients’ adipose tissue and expanded. In addition, blood sampling was obtained from the patients in order to isolate platelet lysate. After the application of the above treatments, patients were evaluated with an International Index of Erectile Function (IIEF-5) questionnaire, penile triplex, and reported morning erections. After MSCs and PL administration, patients presented improved erectile function after 1 and 3 months of follow-up. A statistically significant difference was observed in the IIEF-5 score before and after administration of both treatments after the first month (p < 0.05) and the third month (p < 0.05). No statistically significant difference was observed in the IIEF-5 score between group A and B patients. All patients were characterized by improved penile triplex and increased morning erections. No severe adverse reactions were observed in any patient except a minor pain at the site of injection, which was in the limits of tolerability. The results of this study indicated the satisfactory use of MSCs and PL in ED. MSCs in combination with PL or PL alone seems to be very promising, especially without having the negative effects of the current therapeutic treatment. View Full-Text
Keywords: erectile dysfunction; MSCs; stem cells; platelet lysate; IIEF-5 questionnaire erectile dysfunction; MSCs; stem cells; platelet lysate; IIEF-5 questionnaire
►▼ Show Figures 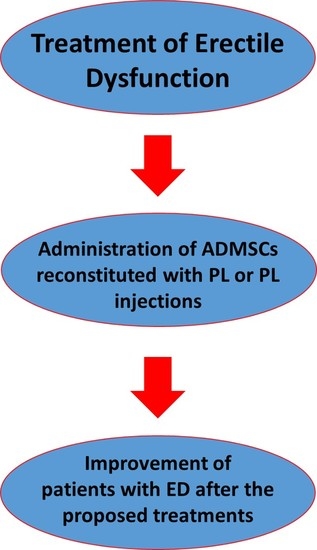