The Impact of Climate Change on Water Resource Availability in a Trans-Boundary Basin in West Africa: The Case of Sassandra

Assessment of Changes in Flood Frequency Due to the Effects of Climate Change: Implications for Engineering Design

The authors explore the uncertainty implied in the estimation of changes in flood frequency due to climate change at the basins of the Cedar River and Skunk River in Iowa, United States. The study focuses on the influence of climate change on the 100-year flood, used broadly as a reference flow for civil engineering design. Downscaled rainfall projections between 1960–2099 were used as forcing into a hydrological model for producing discharge projections at locations intersecting vulnerable transportation infrastructure. The annual maxima of the discharge projections were used to conduct flood frequency analyses over the periods 1960–2009 and 1960–2099. The analysis of the period 1960–2009 is a good predictor of the observed flood values for return periods between 2 and 200 years in the studied basins. The findings show that projected flood values could increase significantly in both basins. Between 2009 and 2099, 100-year flood could increase between 47% and 52% in Cedar River, and between 25% and 34% in South Skunk River. The study supports a recommendation for assessing vulnerability of infrastructure to climate change, and implementation of better resiliency and hydraulic design practices. It is recommended that engineers update existing design standards to account for climate change by using the upper-limit confidence interval of the flood frequency analyses that are currently in place. View Full-Text
Keywords: hydrology; climate change; engineering design; uncertainty; discharge projections hydrology; climate change; engineering design; uncertainty; discharge projections
►▼ Show Figures 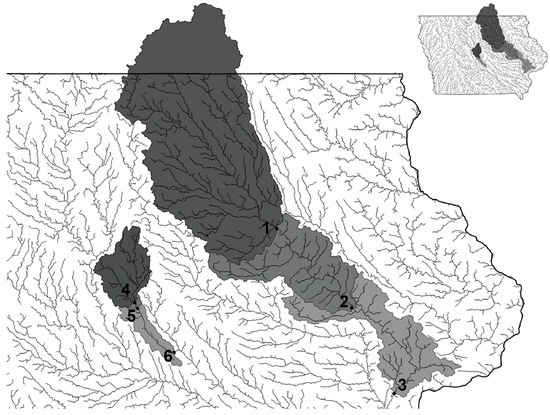