Microbial Ecology of Biofiltration Units Used for the Desulfurization of Biogas

Nanoparticles are receiving widespread attention due to their continuously increasing applications in various industries. In today’s world, nanoparticles are used not only as filler materials in nanocomposites but also as catalysts, in cosmetics, as carriers for drug delivery, and so on [1,2]. Nanoparticles are materials with at least one dimension less than 100 nm, and thus, they have a high specific surface area. Some special properties of composite materials can be enhanced by the addition of nanoparticles (for instance, titania nanoparticles can improve the brightness and opacity of white paper [3] and silica nanoparticles can improve the mechanical properties of coatings [4]), due to their large active surface area. This is called the “nano-effect” in the pigment/extender industry. On the other hand, nanoparticles tend to interact with one another to form micron-sized agglomerates, thus reducing their high surface energy [5]. In handling powder consisting of nanoparticles, agglomeration is an important phenomenon that can occur through several engineering processes including synthesis, filtering (solid-liquid separation), hot-air drying, delivering, and storing. When nanoparticles form agglomerates in binder materials, their inherent properties cannot be fully exploited. Therefore, dispersing nanoparticles in a matrix is a key requirement for producing nanocomposites with higher performances. In industry, each nanoparticle manufacturing process is designed so that agglomerates are more easily re-dispersed. However, there is no practical standard test method for measuring the fracture strength of individual agglomerates into smaller parts.
Nano-indentation is a reliable technique used to determine the micromechanical properties of single particles [6], thin-films [7], bulk materials [8], architected nanocomposites [9], and so on. With this technique, indentation load can be quantitatively measured as a function of penetration depth of the indentation tip into the specimen surface with nanometer depth resolution. The method has been applied to samples ranging from hard materials (e.g., metals [7,8], ceramics [10], and minerals [6]) to relatively soft materials such as polymers [11]. In this study, we attempted to apply the technique to evaluate the fracture strength of individual nanoparticle agglomerates. There are a few reports on application of nano-indentation for nanoparticle agglomerates. Raichman et al. succeeded in measuring inter-particle (silver nanoparticles, size: ~80 nm) forces in the nanometer regime using a contact mode scanning force microscope equipped with a cube-corner indenter tip [12]. Schilde et al. succeeded in measuring micromechanical properties of agglomerates (size: ~10–15 μm) of alumina nanoparticles (size: ~50–100 nm) with different primary particle morphologies (cuboid, disc, and needles) via nano-indentation using a Berkovich tip [13]. However, we believe the use of a flat indenter tip can offer more advantages than a pointed indenter tip (cube, Vickers, or Berkovich), with respect to a fracture strength test for nanoparticle agglomerates that have irregular shapes. In this study, we present preliminary data to establish a conventional fracture strength test method for nanoparticle agglomerates using a commercially available nano-indentation system equipped with a flat indenter tip. For fracture strength calculation, we used the Hiramatsu equation [14,15], which is used to evaluate the fracture force of irregularly shaped test pieces by uniaxial compression tests.
We chose synthesized calcium carbonate (CaCO3) nanoparticles with calcite phase as a model material. Synthesized calcite nanoparticles [16,17] are relatively uniformly-shaped rhombohedral particles (aspect ratio ~1) with narrow particle size distributions, so the effects of the primary particle morphology could be minimized in this study. It is reported that agglomerates of calcite nanoparticles have relatively spherical shapes [18]. CaCO3 nanoparticles are widely used as filler materials in several industries, including rubber, plastics, sealants, paints, printing inks, and paper [19]. For some hydrophobic binders such as plastics and sealants, the surfaces of CaCO3 particles are often treated with fatty acids in order to increase the affinity to the binders [20,21]. For the present study, we employed agglomerates of CaCO3 nanoparticles with/without fatty acid coatings as model materials. As the agglomerates are not ideal spheres, we crushed many agglomerates and calculated the average fracture strength.

Fracture strength of agglomerates was measured by nano-indentation method using a commercially available nano-indentation system (ENT-2100, Elionix Co. Ltd., Tokyo, Japan). The instrument has a force range of 1 μN–100 mN and a displacement resolution of 0.06 nm. Figure 1a shows a schematic illustration of the fracture strength test by the nano-indentation system. The powder samples were dry dispersed onto Si wafer substrates (~15 mm × 15 mm), and the substrates were fixed onto a sample holder using a commercially available instant adhesive. We chose a polycrystalline diamond flat tip with a diameter of 20 μm. Agglomerates within the predetermined size range of 9–12 μm in diameter were chosen as indentation targets. The maximum load applied for each indentation was set to 2 mN. The measurement was conducted in ambient conditions at room temperature. The measurements were carried out until ten pieces of data were collected for each sample. The indenter tip was cleaned with acetone-soaked cotton swabs after each indentation test. Optical micrographs of agglomerates before and after the nano-indentation tests were taken from the direction parallel to the substrate using a CMOS camera (maximum magnification: ×2000) attached to the instrument. The diameter of each agglomerate was defined as the average of the length and width measured from the optical micrographs.
From the load-displacement curves obtained by nano-indentation tests, fracture strength were calculated using the Hiramatsu equation [14,15]: where Csp is fracture strength, Fsp is load at fracture point, and d is diameter of agglomerate. The equation is widely used to calculate fracture strength for irregularly shaped test pieces. Figure 1b shows a schematic load-depth diagram for the nano-indentation test. In this study, agglomeration fracture point was defined as where the depth between a plot and the following plot (∆Dfollowing in Figure 1b) becomes more than twice as large as the depth between the plot and the previous plot (∆Dprevious in Figure 1b) for the first time during an indentation test.

Figure 2 shows a typical bright-field (BF) TEM image of primary particles in the non-coated sample. Calcite rhombohedral particles with an approximate size of 80 nm can be confirmed. Fatty acid contents derived from TGA (Figure S1), average crystallite sizes derived from XRD patterns (Figure S2), and the BET-SSA of the three types of CaCO3 powders are listed in Table 1. Fatty acid content of the heavily-coated sample was about twice that of the lightly-coated sample. Assuming that stearic acids form close-packed homogeneous layers on the calcite surface, lightly-coated and heavily-coated samples have 81% and 152% of their respective calcite nanoparticle surfaces coated with stearic acids. Although all three samples had similar average crystallite sizes, the BET-SSAs of the fatty acid-coated samples were significantly lower than the non-coated sample. This is likely to be because “apparent sizes” and surface roughness of the treated particles become larger due to the fatty acid coatings.

We presented some preliminary results and demonstrated a rapid way to measure the fracture strength of agglomerates using a commercially available nano-indentation instrument. The experimental and analysis method employed in this study are simple and can be applied for agglomeration fracture strength testing not only for CaCO3 but also for other nanoparticles such as titania, alumina, silica, carbon black, and so on. In the present study, we used the technique to evaluate the effect of surface treatment on agglomeration fracture. However, we believe that the technique is beneficial for optimizing each process of manufacturing powder materials, including synthesis (including choosing appropriate particle size and shape), filtering, drying, and delivering by evaluating how easily nanoparticle agglomerates can be re-dispersed into smaller fragments. Because the observation direction is parallel to the indentation direction, agglomerates cannot be observed during fracture test using the nano-indentation instrument used in this study. A further approach for fraction behavior may be needed to observe agglomerates cross-sectionally during indentation tests.

Y.K. conceived, designed and performed the experiments, analyzed the data, and wrote the paper. Y.K. and M.T. discussed the results and reviewed the paper.

The authors acknowledge Elionix Co. Ltd. for the helpful discussions and thoughtful comments for measurement and analysis using the ENT-2100 instrument. 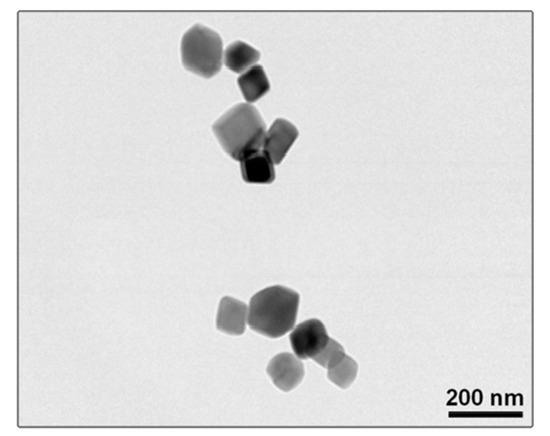 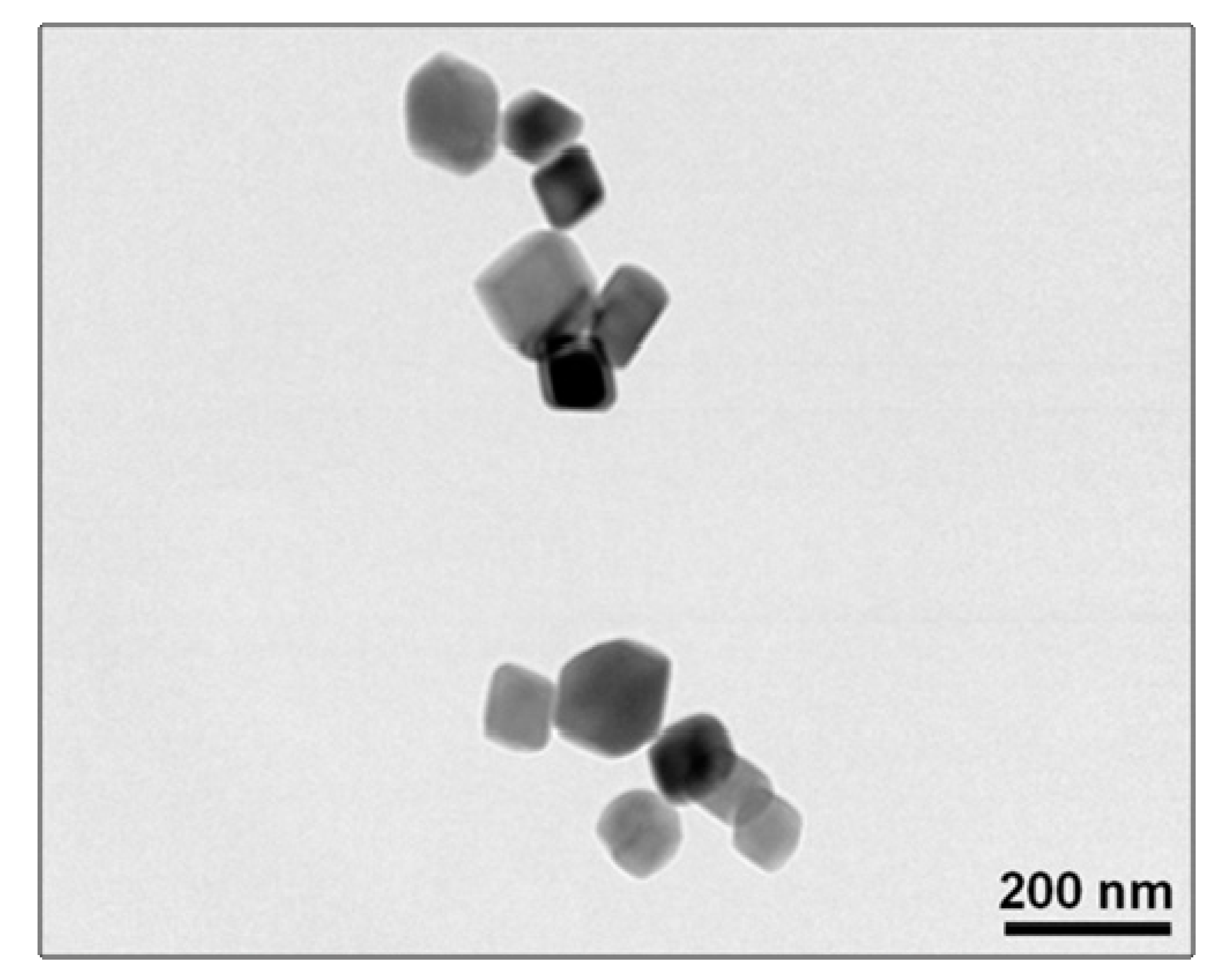 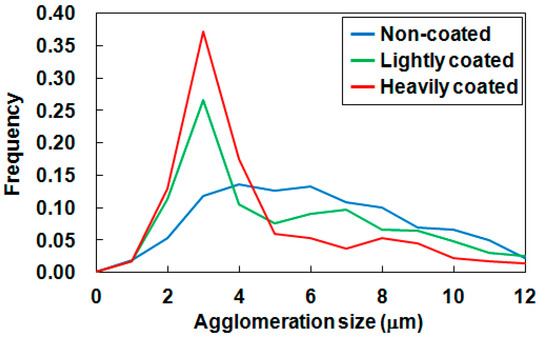 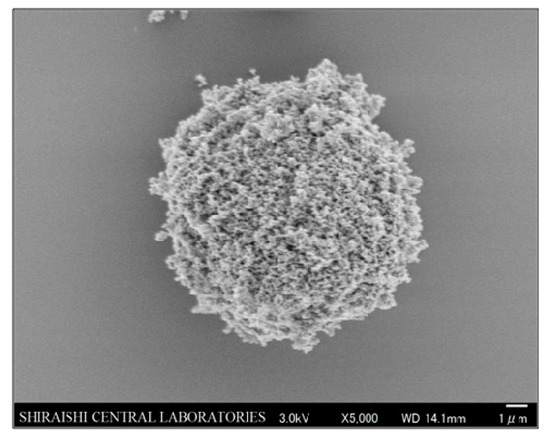 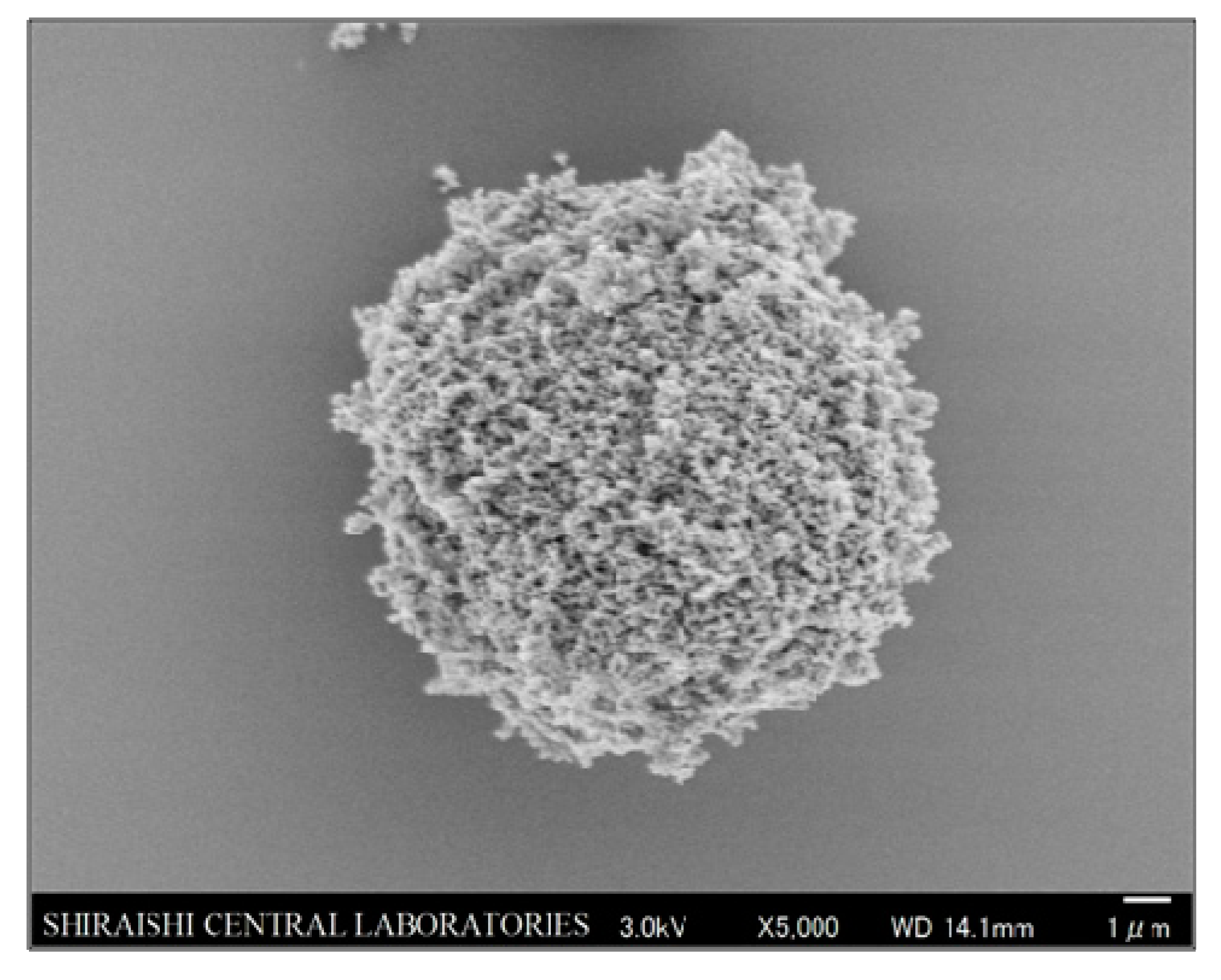 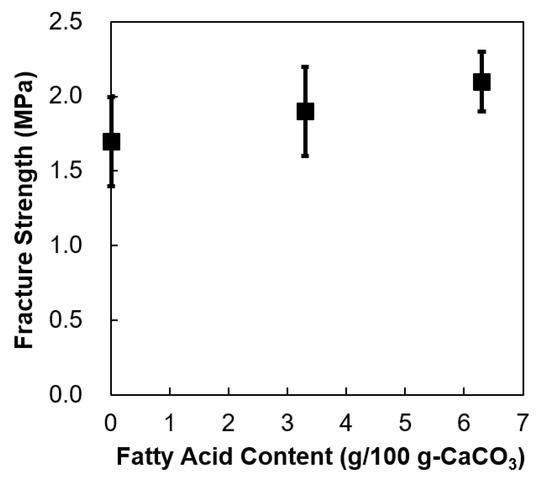 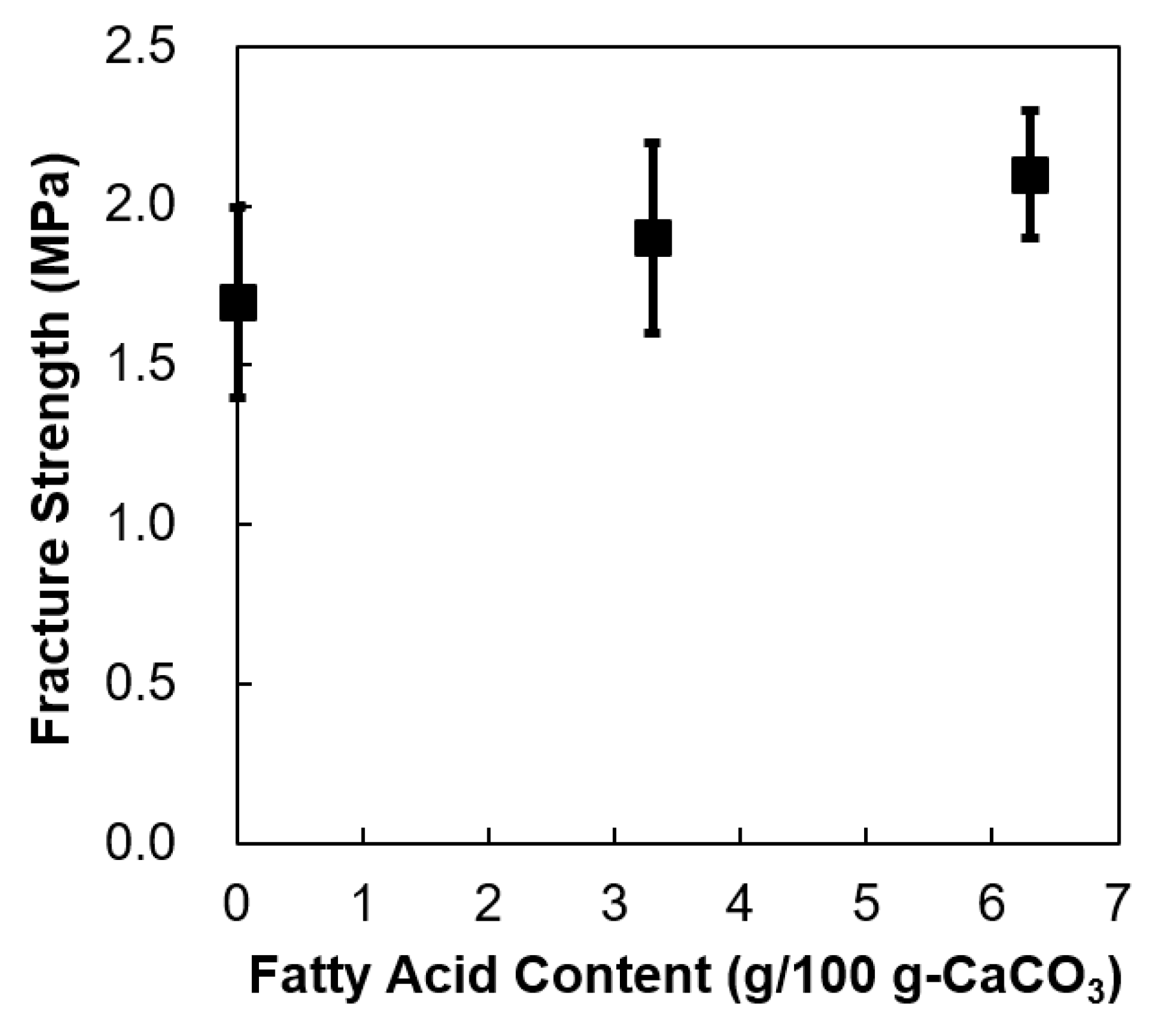