Ceria, zirconia, and mixed cerium-zirconium mesoporous oxides were synthesized and used as supports for sulfur and gold species. The materials were characterised using selected advanced techniques (Inductively Coupled Plasma Optical Emission Spectrometry (ICP-OES), elemental analysis, X-ray Photoelectron Spectroscopy (XPS), X-ray Diffraction (XRD), N2 adsorption, and desorption isotherms, Ultraviolet-Visible Spectroscopy (UV-vis), Attenuated Total Reflectance-Fourier Transform Infrared (ATR-FTIR), Temperature Programmed Reduction (TPR-H2), Thermogravimetric and Differential Thermal Analysis (TG-DTA)), which allowed for monitoring of the oxidation state of metals (cerium and gold) and the surface properties of the catalysts, in particular the concentration of the components on the surface and in the bulk of materials. The interactions between gold, sulfur, and metals from oxides were considered. The goal of this work was studied the changes in the chemical composition of materials and the oxidation states of cerium species after the modification of oxides with sulfur and gold species and the estimation of the influence of these changes on the surface properties. The chemical composition of surface affects the mobility of surface oxygen and the oxidation state of cerium, which can play the role of redox sites (e.g., Ce3+/Ce4+ species), and therefore it strongly influences the adsorption of hydrogen sulfide and then gold loading. Additionally, gold catalysts modified with sulfur species were tested in the reaction of glycerol oxidation in the liquid phase at basic conditions as the test reaction of the catalytic oxidation of organic pollutants from water. View Full-Text
Keywords: ceria; zirconia; gold; sulfur; catalysts characterisation; glycerol oxidation ceria; zirconia; gold; sulfur; catalysts characterisation; glycerol oxidation
►▼ Show Figures 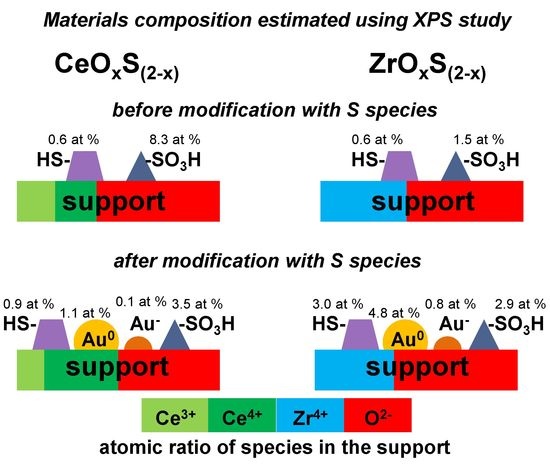 Kaminski, P. Effect of the Chemical Composition of Mesoporous Cerium-Zirconium Oxides on the Modification with Sulfur and Gold Species and Their Application in Glycerol Oxidation. ChemEngineering 2017, 1, 18. https://doi.org/10.3390/chemengineering1020018


Kaminski P. Effect of the Chemical Composition of Mesoporous Cerium-Zirconium Oxides on the Modification with Sulfur and Gold Species and Their Application in Glycerol Oxidation. ChemEngineering. 2017; 1(2):18. https://doi.org/10.3390/chemengineering1020018


Kaminski, Piotr. 2017. "Effect of the Chemical Composition of Mesoporous Cerium-Zirconium Oxides on the Modification with Sulfur and Gold Species and Their Application in Glycerol Oxidation" ChemEngineering 1, no. 2: 18. https://doi.org/10.3390/chemengineering1020018