Study Protocol for a Randomized Double Blind, Placebo Controlled Trial Exploring the Effectiveness of a Micronutrient Formula in Improving Symptoms of Anxiety and Depression
Next Article in Special Issue

Revised Modelling of the Addition of Synchronous Chemotherapy to Radiotherapy in Squamous Cell Carcinoma of the Head and Neck—A Low α/β?

Use of Acupuncture in an Infant with Restlessness and Agitation

Abstract: Background: We are reporting here about a 3-month-old boy with a history of failure to thrive, hypertrophic obstructive cardiomyopathy and neurological misbehaviour including hypotension in body muscles, who was found to have screaming attacks, agitation and restlessness. Methods/Results: Body and ear acupuncture was used both as supporting and integrative therapy to reduce the phases of restlessness and screaming and, simultaneously, the use of hypnotic drugs, as well as to improve the baby’s thriving. Conclusions: Our case has proved that standardised ear and body acupuncture applied by trained acupuncturist paediatricians is a helpful non-pharmacological treatment tool. While acupuncture is typically used in the outpatient setting, it can equally be used in the inpatient setting, as exemplified by the positive outcome of the presented case.
Keywords: acupuncture therapy; baby; restlessness; agitation acupuncture therapy; baby; restlessness; agitation

In recent years, the interest in complementary and integrative therapies for children has increased significantly [1,2]. Traditional Chinese Medicine (TCM) has been reported as one of the most popular complementary treatments in children and neonates [3,4]. TCM includes (i) massage therapy (Tuina); (ii) moxibustion; and (iii) different kinds of acupressure and acupuncture [5,6]. The most common complementary applications for acupuncture include pain [7,8] and chemotherapy-induced nausea/vomiting [9]. To this day, only a few studies have investigated the effect of needle acupuncture in infants [10,11,12,13]. Even this limited available data suggests that acupuncture may be applied as a safe, non-pharmacological treatment option for the reduction of pain and agitation in term and preterm infants [14,15,16].
This case report illustrates the feasibility, safety, and efficacy of needle acupuncture in an infant with various medical dilemmas who was admitted to the intensive care unit.

We are reporting here about a 3-month-old infant who revealed a history of swallowing problems, gastroesophageal reflux, failure to thrive, hypertrophic obstructive cardiomyopathy, neurological abnormalities, and screaming attacks ever since his birth. He was the second child of healthy, non-consanguineous parents, born in an uncomplicated vaginal delivery at 40 + 1 pregnancy weeks with an APGAR score of 9 at 1 min and a score of 10 at five and 10 min. Postnatal adaption was unremarkable, however, with an obvious macrosomia without the evidence of maternal gestational diabetes. During the first few weeks of his life, the baby boy showed poor thriving, and agitation, and at the age of three months, hospital admittance was recommended. Echocardiography showed hypertrophic obstructive cardiomyopathy. To rule out Sandifer, Costello syndrome, and Mb—pompe, genetic and metabolic investigations were performed but revealed no evidence of any congenital syndromes (until today). One day after admission, the patient showed signs of respiratory distress, phases of restlessness and agitation. The skin was pale; he was sweating and demonstrated ophistotonus. The heart rate increased intermittently up to 180/min while oxygen saturation decreased to 75% in ambient air conditions. The screaming attacks lasted for one hour, and calming the infant was almost impossible. The patient was subsequently transferred to the paediatric intensive care unit (ICU) where he received hypnotic drugs. Parenterally, Phenobarbital (5 mg/kg/day), Clonidine (10 µg/kg/day), Midazolam (0.5 mg/kg/day) and homeopathic suppositories were administered for 5–7 days, however, they had little impact. Additionally, submitter nutrition by gavage turned out to be necessary due to feeding problems and drinking weakness of the infant.

Acupuncture was used as adjunctive therapy with the aim to reduce the phases of restlessness and screaming, and it was hoped to reduce the need for hypnotic drugs. Body and ear acupuncture were performed by two trained specialists. Sterile and thin disposable acupuncture needles (0.20 × 15 mm) were applied at acupuncture points LR 3, LI 4 and ST 36 on both sides of the body. The needle was inserted 2–4 mm deep into the baby’s skin and manipulated slightly until a certain sensation of resistance was felt and then left in place for approximately 10 to 20 s before withdrawal. When doing the Yin Tang point, the needle was left in place for approximately 10 to 15 min. Furthermore, ear acupuncture was performed at Shen Men with an indwelling needle (0.20 × 1.2 mm) lasting 24 h. A total of six sessions were applied, performed every other day. The skin response at the needle’s insertion points was noticeable. During the acupuncture sessions the patient was quiet, relaxed and would even fall asleep, especially after tapping the Yin Tang point. (Figure 1) Strikingly, both the frequency and duration of the infant’s screaming attacks and restlessness decreased after only one acupuncture treatment. The patient was found to be calmer, his handling was now easier and his body tension was found to be significantly reduced. All this was reported back to us by the nursing staff. As a result, the sedative medication dose was able to be reduced on a daily basis. After one week of acupuncture treatment, Clonidine and Midazolam were discontinued, and the patient was now able to drink infant formula via bottle feeding.

The acupuncture points are here described following the international nomenclature [17]. The treatment itself is described according to the current Standards for Reporting Interventions in Clinical Trials of Acupuncture (STRICTA) guidelines [18,19].
Yin Tang (“Point de Merveille”, EX-HN3) [20] located in the midpoint between the eyebrows was chosen due to its sedative and analgesic effects, in addition to its anxiolytic and stress-reducing impact [14,21,22].
Tai Chong (Liver 3, LR 3) located on the dorsum of the foot, in a depression distal to the junctions of the first and second metatarsal bones, was used as calming point to reduce the irritability, anger, insomnia and anxiety of the baby [23,24].
Additionally, we did the Hegu (Large Intestine 4, LI 4), situated on the dorsal surface of the hand between the first and second metacarpal bones, as a general pain point and to regulate the face and head areas. This point was also identified to minimise swelling and irritability [25,26].
Zusanli (Stomach 36, ST 36), located in the tibialis anterior muscle, 3 cun below ST 35 and one finger-breath lateral of the anterior border of the tibia was selected to reduce gastric symptoms such as dysphagia, vomiting, nausea and to activate the baby’s appetite [27,28].
Recognised as one of the most effective ear-acupuncture points, we used Shen Men (ear point no 55) situated at the apex of the triangular fossa. It was used to alleviate apprehension, fear, and anxiety, reduce addiction to sedative medication, and to regulate the sympathetic nervous system [29]. Comparable effects to ear acupuncture were demonstrated by Capone et al. after transcutaneous vagus nerve stimulation at an external acoustic meatus that produces an increased cortical inhibitory modulation of the right motor cortex [30].
Written informed consent was obtained from the baby’s mother.

In conclusion, it can be said that our case has shown that acupuncture performed by trained acupuncturist paediatricians is a helpful non-pharmacological treatment tool for reducing pain and agitation. While acupuncture is typically used in the outpatient setting, it can also be used in the inpatient setting, as exemplified by the positive outcome in the above case.
This case report thus adds to the literature on the usefulness of acupuncture in paediatric samples in the hospital setting.
In addition, we recommend that each acupuncture study protocol be supervised by a trained acupuncturist in accordance with the STRICTA Declaration [19], an extension of the Consolidated Standards of Reporting Studies (CONSORT) statement [18].

This research was undertaken without any external funding. 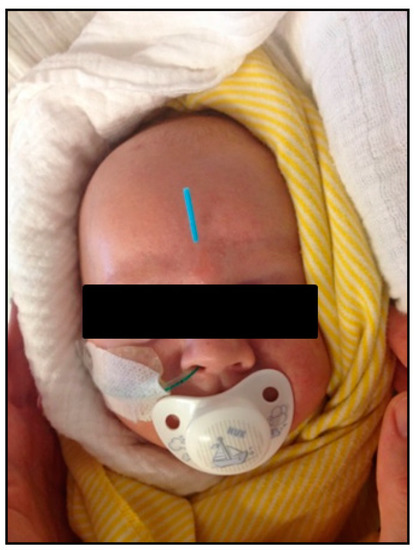 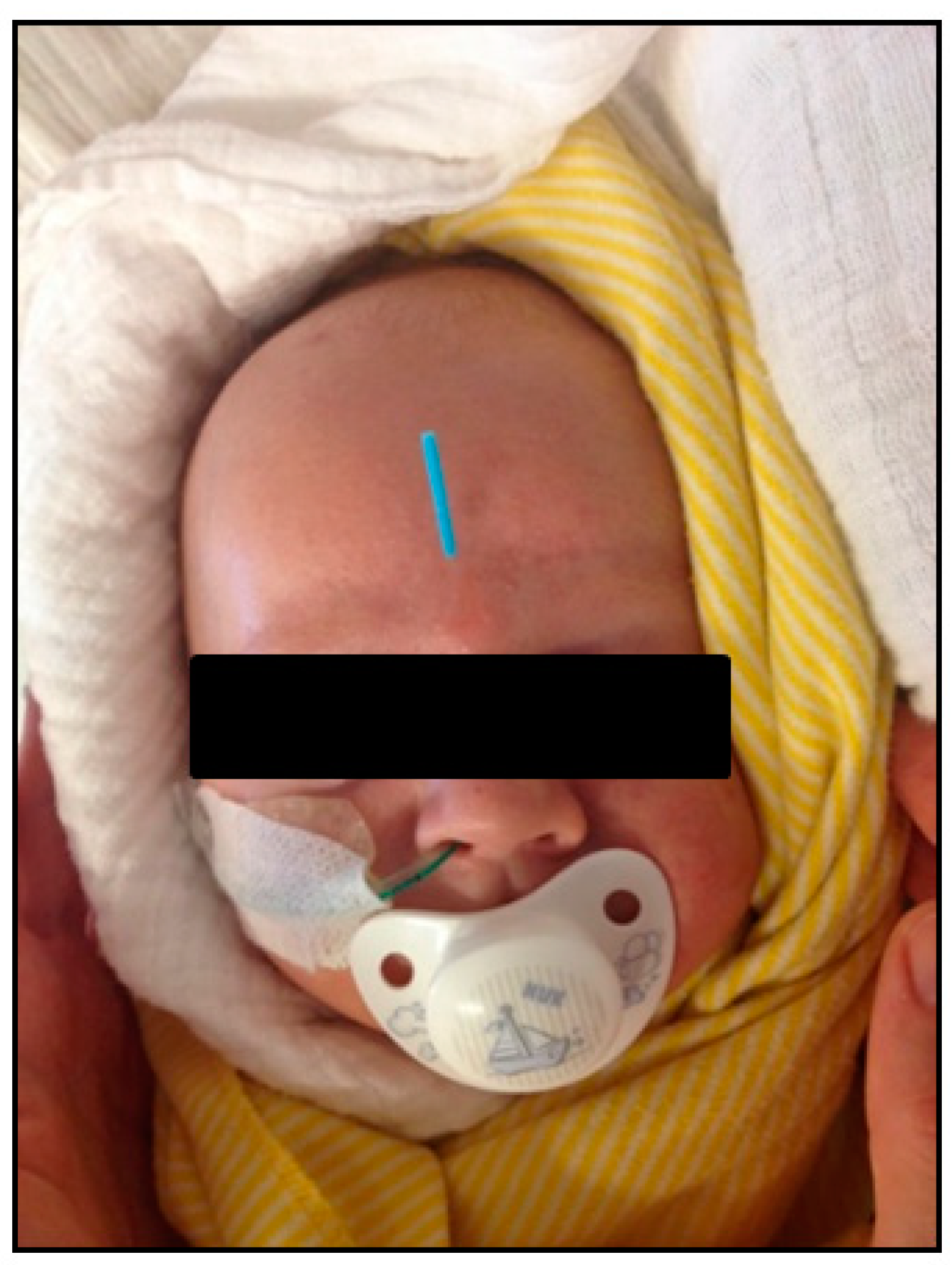