Report from the 9th International Symposium on Auriculotherapy Held in Singapore, 10–12 August 2017

Auricular Neuromodulation: The Emerging Concept beyond the Stimulation of Vagus and Trigeminal Nerves

Neuromodulation is a physiological process which consists of the alteration of neuronal and synaptic properties by neurons or substances released by neurons [1].
In recent years, the use of electrical- and/or magnetic-based neurostimulation methods has raised a growing interest both in clinical and experimental research. Although our scientific knowledge is still incomplete, a relevant amount of evidence allows us to affirm that whatever the stimulus used, with both central and peripheral approaches [2,3], neurostimulation impacts on the release of neurotransmitters and thus on the activity of the central nervous system (CNS). By changing neurotransmitters’ concentration in specific brain regions, neuromodulation may modify the intrinsic properties of neuron membrane thus altering response to synaptic events. Indeed, neuromodulation does not necessarily convey excitatory or inhibitory signals, but rather alters the cellular and/or synaptic properties of neurons [4]. As a consequence, neuromodulatory stimuli may influence the development of new neural circuits or reshape the output of the existing ones, sometimes effectively rewiring or reprogramming them [5,6,7]. In this light, neuromodulation should be seen as a manipulation of the balance between different functional brain networks, which can result in improved behaviour when applied in the right context [8].
Some neuromodulatory substances have been termed ‘extrinsic’ as they are released by neural projections that are clearly outside of, or not part of, the circuits that they modulate [9,10]. Others are termed ‘intrinsic’ because they are released by some of the self-same neurons that are part of the circuit that they modulate [8,9,10]. In this case, when the circuit is operational or active, some of its neurons may release neuromodulators that alter synaptic strengths and intrinsic membrane properties of other circuit components [6,10].
Extrinsic modulation can be used not only to regulate one neural circuit, but also to organize ensembles of circuits found in myriad regions in the CNS. Intrinsic modulation may be more restricted, both spatially and temporally, as it may be used primarily to maintain ongoing activity. For example, in a circuit with significant intrinsic modulation that produces an enhanced level of excitability, a short synaptic input can ‘jump start’ a circuit, causing the release of an intrinsic modulator that would significantly maintain the activity after the initiating signal [10]. Because it is now clear that many neurons may have both ionotropic and metabotropic receptors to the same neurotransmitters, it is possible that some amount of metabotropic-mediated intrinsic modulation commonly accompanies strong circuit activation that releases a significant amount of transmitter [6,7]. As discussed above, neurostimulation is one method used to modulate the information processing activity of the CNS. This is typically carried out to compensate for loss of normal function due to disease or injury. Implicit in the use of neurostimulation to treat a neural disorder is a rudimentary understanding of which part of the nervous system is dysfunctional and the type of compensation required to recover normal function [11].
However, not all neurostimulation approaches end up with modulation of CNS activity or neuronal plasticity. Indeed, some consequences of neurostimulation are most likely due to activation of nervous reflex circuitries rather than to neuromodulation [12]. A prototypical example is the inflammatory reflex, comprised of an afferent arm that senses inflammation and an efferent arm, the cholinergic anti-inflammatory pathway, that inhibits innate immune responses and the progression of inflammatory diseases [12,13]. The inflammatory-reflex is an example for how action potentials of neurons belonging to integrated neural network impact on immunity. In addition, in this case a fundamental role is played by neurotransmitters which propagate essential information for the regulation of immune responses, steering together the fields of immunology and neuroscience [13,14]. Tonic neural activity in the cholinergic anti-inflammatory pathway is essential for health because when it is impaired the consequences include unrestrained cytokine responses that damage tissue or kill the host. By contrast, enhancing the activity of this immune-mediated neural circuit confers protection [14]. In this perspective, neurostimulation methods have been developed to target neural networks for the treatment of inflammatory disorders.
Neurostimulation provides a much-needed therapeutic relief for an extraordinary number of people affected by debilitating neurologic and psychiatric disorders worldwide.
From a medical viewpoint, neurostimulation techniques do provide several advantages with respect to conventional drug treatment:
In its most basic form, a neurostimulation device is constituted by: a power supply, a programmable pulse generator, the electrodes in contact with the tissue and the connection wires. Stimulation parameters (waveform, amplitude, frequency, pulse duration and duty cycle) and system placement depends on the device type, the anatomical location of the targeted dysfunctional neuronal circuitry and the patient’s medical history [15].
Based on the anatomical placement of the stimulation device, neurostimulation approaches may be classified as invasive and non-invasive.
Invasive neurostimulation therapies have emerged as an effective treatment for a growing number of medically resistant neurologic and neuropsychiatric disorders. However, their use is hampered by the cost and the need of surgical implantation which is not devoid of risks and side effects, hence different non-invasive techniques have been evaluated and increasingly developed as alternative approaches.
Non-invasive neurostimulation include several techniques largely used as a treatment for many neurologic and neuropsychiatric disorders. Among them, transcutaneous electrical nervous stimulation (TENS) has shown a rapid evolution in the last decades. The low cost, portability and ease of use are among the many characteristics that made TENS techniques very interesting to the scientific and medical communities. Indeed, their simplicity and versatility are an attractive option for the clinician as a stand-alone therapy or combined with other neuromodulation treatments [3]. Among the different TENS-derived techniques, a large body of evidence now demonstrates that both transcutaneous trigeminal and vagus nerve stimulation (TNS and tVNS, respectively) can exert robust therapeutic effects without unsafe consequences.

2. TNS, tVNS and Auricular Stimulation: Possible Sites and Mechanisms of Action in the Central Nervous System

3. The “Next Frontier” of Neuromodulation of the Outer Ear: The Cervical Plexus Supply Area

It is worth noting that this particular area of the outer ear has been almost underexploited for clinical electrostimulation so far. For example, a recent study [74], points out that auricular points used for treatment of pain in 17 randomized controlled studies did not belong to this area but were exclusively located in areas of the ear innervated either by cranial nerves only (including X and V) or in areas with mixed innervation by the vagus nerve and cervical nerves. Indeed, the area innervated by the cervical nerves, mainly the lobule, is often used in experimental studies as a control site [75,76,77]. Nevertheless, ear-point electrical stimulation (0.2 mA, 80 Hz) on the great auricular nerve was able to definitely improve both electrocorticogram and seizure behavior in one study on epileptic induced rat [78]. Another controlled Chinese study assessed the therapeutic effect in vascular dementia of auricular point taping and pressing therapy of Shennen Nao (brain), Shen (kidney) and Zhen (pulvinal) [79]. This study included two groups of 90 patients treated during 12 weeks either with auricular point taping and pressing or with oral Nimodipine (3 × 30 mg per day) and showed no differences between the two groups. Only one fMRI study has supported the representation in the CNS of the ear area supplied by the cervical plexus area [80]. This study was originally designed to validate the specificity of ear acupuncture. It compared two acupoints, the Brain Stem Auricular Acupoint (BSAA, an acupoint of a CNS structure) and the Thumb Auricular Acupoint (TAA, an acupoint of a body point), located in two different parts of the ear (respectively, the antitragus and the upper part of the scapha). It gave evidence that the stimulation of BSAA, mostly activated cortical and limbic regions on fMRI whereas the stimulation of the TAA selectively activates the secondary somatosensory area bilaterally [80]. Nevertheless, this small study only involved six volunteers (three males and three females) and no scientific conclusion could be drawn. BSAA is the first of a long list of CNS auricular acupoints whose location is waiting to be validated by modern research.
According to auriculotherapy, the medial side of the auricle is thought to regulate motor and endocrine paradigms whereas its lateral side is supposed to be involved in sensorial and sensitive matters. It is noteworthy that the medial side of the outer ear is almost exclusively supplied by the cervical plexus. An experimental study, using electrostimulation of the lateral side of the ear (cathode in the apex and anode in the lobe of the ear: frequency: 2 Hz, intensity: 2 mA, duration: 100 μs; 20 min/day, 10 min for each ear for 7 days continuously) was not able to improve motor scores but significantly ameliorated learning and memory impairment in rats with ischemia-reperfusion injury [81]. The authors explained the absence of significant improvements in the motor domain with the reperfusion protocol used (ear stimulation 24 h after reperfusion) and attributed the cognitive beneficial effects with neuroprotection related to the increase in acetylcholine release and in neuronal survival [81].
In light of the above data, the ear area innervated exclusively by the cervical plexus (basically the lobule and the lowest part of the helix), seems to be the “next frontier” for scientists to explore and unravel, probably opening the way to brain area targeted and/or motor neuromodulation.

Thanks to the availability of high-tech devices and scientific progress, in less than a century since the hypothesis of auricular maps by Paul Nogier, we are about to start advanced multi-modal neuromodulation through the ear. Auricles might then become the most affordable, accurate and powerful gateway to the brain, if ever the auricular maps, used for years in auriculotherapy, are fully proven to be scientifically correct. Comparative studies evaluating the ratio efficacy/cost of auricular stimulation versus other neurostimulation modalities are warranted and would probably boost this emerging technique, not only helpful for therapeutic purposes but also for understanding healthy humans functioning [82].

The authors are grateful to Paul Gottlieb for revising the English. 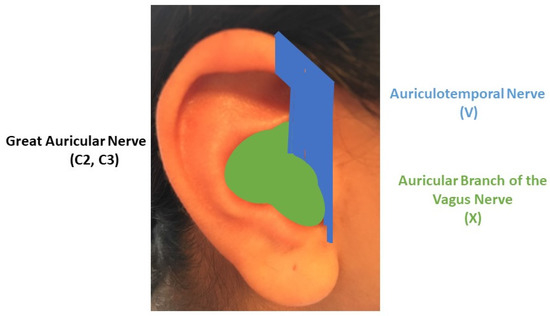 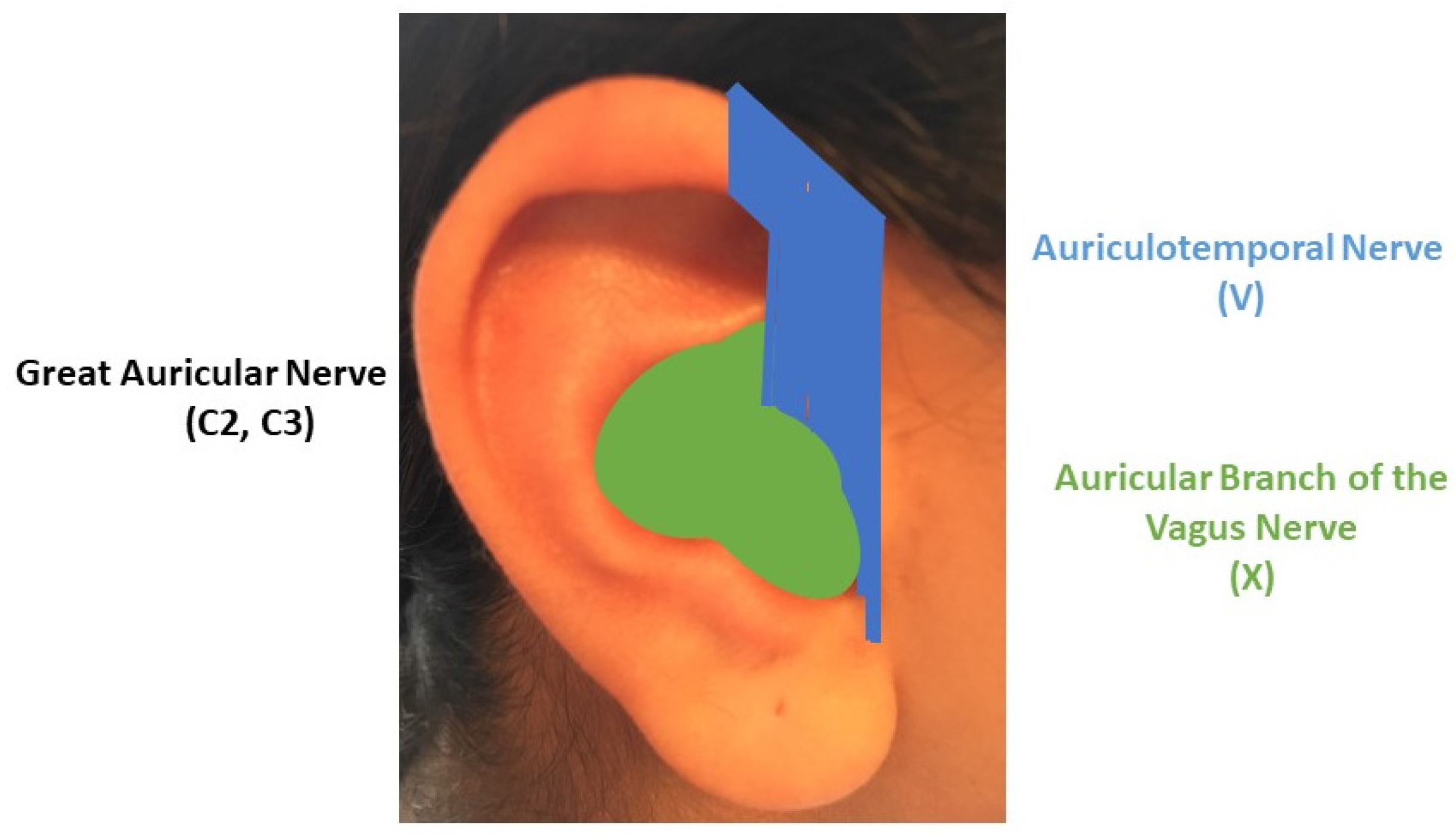 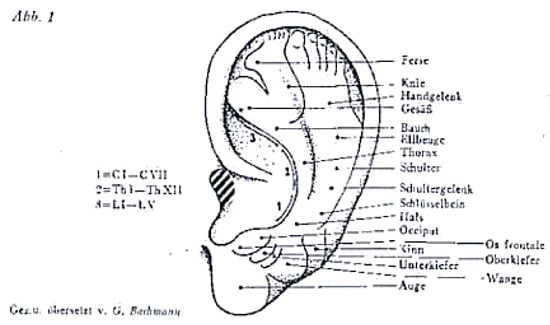 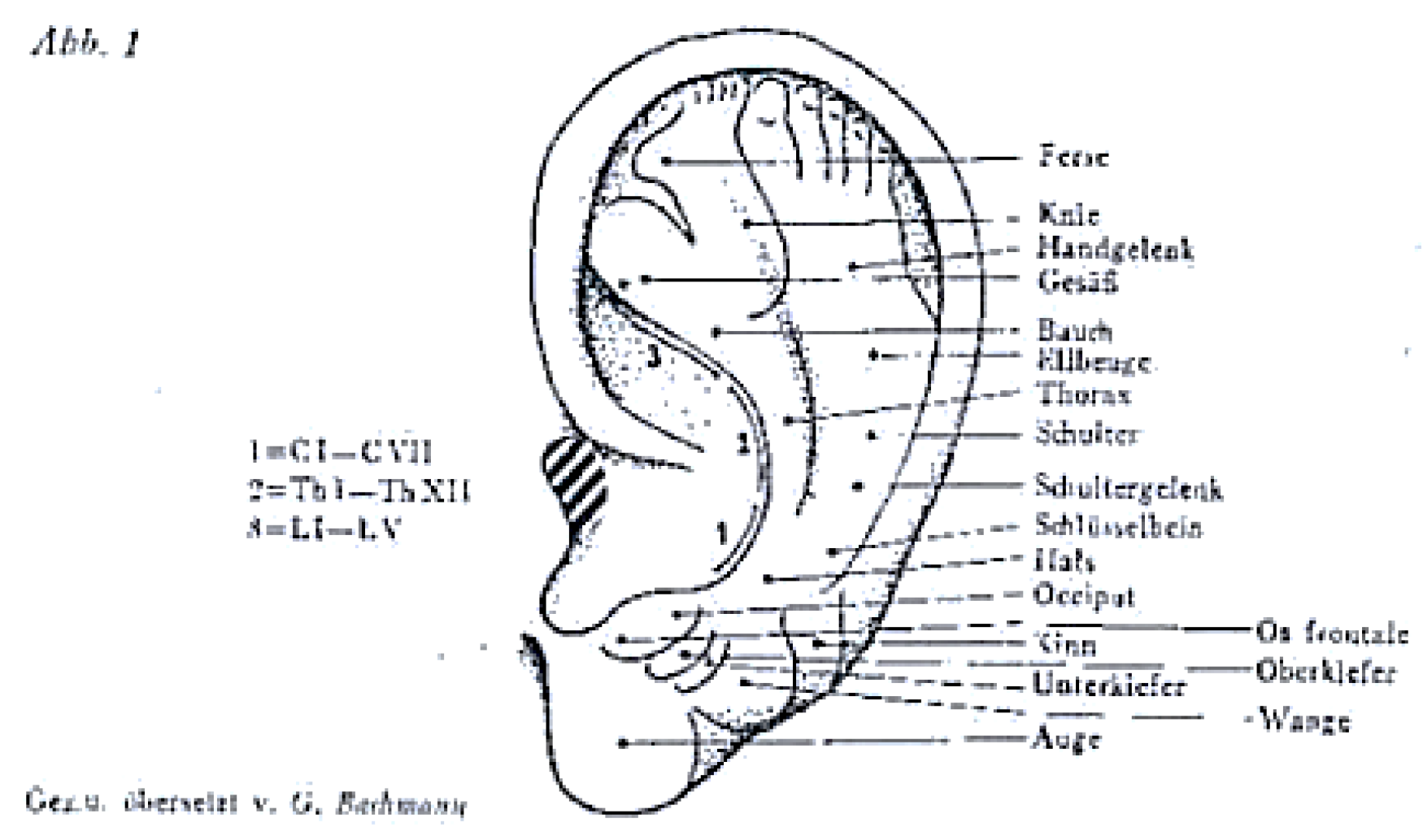