Background: Common sage (Salvia officinalis) is a popular culinary and medicinal herb. A literature survey has revealed that sage oils can vary widely in their chemical compositions. The purpose of this study was to examine sage essential oil from different sources/origins and to define the possible chemotypes of sage oil. Methods: Three different samples of sage leaf essential oil have been obtained and analyzed by GC-MS and GC-FID. A hierarchical cluster analysis was carried out on 185 sage oil compositions reported in the literature as well as the three samples in this study. Results: The major components of the three sage oils were the oxygenated monoterpenoids α-thujone (17.2–27.4%), 1,8-cineole (11.9–26.9%), and camphor (12.8–21.4%). The cluster analysis revealed five major chemotypes of sage oil, with the most common being a α-thujone > camphor > 1,8-cineole chemotype, of which the three samples in this study belong. The other chemotypes are an α-humulene-rich chemotype, a β-thujone-rich chemotype, a 1,8-cineole/camphor chemotype, and a sclareol/α-thujone chemotype. Conclusions: Most sage oils belonged to the “typical”, α-thujone > camphor > 1,8-cineole, chemotype, but the essential oil compositions do vary widely and may have a profound effect on flavor and fragrance profiles as well as biological activities. There are currently no studies correlating sage oil composition with fragrance descriptions or with biological activities.
Keywords: sage oil; chemical composition; cluster analysis sage oil; chemical composition; cluster analysis

Sage (also known as garden sage, common sage, or culinary sage; Salvia officinalis L., Lamiaceae) is a popular culinary and medicinal herb, native to southern Europe and the Mediterranean, but now cultivated worldwide. The plant has been used since ancient times for various human ailments. For example, in England, a decoction of sage leaves with wine was gargled to relieve toothache [1]; in Germany, sage was used orally for gastrointestinal problems and excessive perspiration, and was used topically for inflammation of the mucous membranes of the mouth and throat [2]; the Cherokee Native Americans have used an infusion of the plant to treat colds and coughs, and as an antidiarrheal [3]. Commercial sage oil is generally characterized by thujones, with α-thujone usually predominating (18–43%) over β-thujone (3–8.5%), camphor (4.5–24.5%), 1,8-cineole (5.5–13%), α-humulene (0–12%), α-pinene (1–6.5%), camphene (1.5–7%), and bornyl acetate (2.5% maximum) [2].
Caution should be exercised in using sage essential oil. The oil contains large concentrations of α-thujone, which was thought to have been the hallucinogenic constituent of absinthe and the cause of absinthism. This, however, has been shown to be false [4]. Nevertheless, high doses of α-thujone causes convulsions by way of blocking γ-aminobutyric acid (GABA)-gated chloride channels [5,6], and chronic exposure can lead to neurotoxicity [7,8] and carcinogenicity [9]. Use of the herb itself is safe, however; it has been estimated that between 2 and 20 cups of sage tea would be required to reach the acceptable daily intake of thujone [10]. Additionally, thujone has shown a low affinity for cannabinoid receptors, but failed to show cannabinoid receptor agonism [11]. α-Thujone has also been shown to reduce 5-HT3 (ligand-gated ion channel serotonin) receptor activity [12]. In this work, we have characterized two commercial sage essential oils as well as an essential oil obtained by hydrodistillation of sage leaves grown in Mexico. In addition, a cluster analysis has been carried out to place the different chemotypes of sage oil in perspective.

The leaf essential oil samples of Salvia officinalis were analyzed by GC-MS using an Agilent 6890 gas chromatograph coupled to an Agilent 5973 mass selective detector (MSD), operated in the electron impact mode with electron energy = 70 eV, a scan range of 40–400 amu, a scan rate of 3.99 scans/sec, and operated through an Agilent ChemStation data system. The GC column was an HP-5 ms fused silica capillary column with a (5% phenyl)-polydimethylsiloxane stationary phase, a film thickness of 0.25 μm, a length of 30 m, and an internal diameter of 0.25 mm. The carrier gas was helium with a column head pressure of 92.4 kPa and a flow rate of 1.5 mL/min. The inlet temperature was 250 °C and the interface temperature was 280 °C. The GC oven temperature was programmed, 60 °C initial temperature, which was held for 5 min, temperature increased at a rate of 3 °C/min up to 280 °C. Solutions of essential oils (1% in CH2Cl2) were prepared and 1-μL injections were carried out using a splitless mode. Identification of the oil components was based on their retention indices determined by reference to a homologous series of n-alkanes, and by comparison of their mass spectral fragmentation patterns with those reported in the literature [13], and stored in our in-house MS library.

The sage leaf essential oil compositions are summarized in Table 1. The sage oils were qualitatively similar and dominated by the monoterpenoids α-thujone (17–27%), 1,8-cineole (12–27%), and camphor (13–21%), with lesser amounts of β-thujone (3.8–6.0%), camphene (3.5–5.3%), and the sesquiterpene α-humulene (3.1–4.4%). This chemical profile is similar to many sage oil descriptions previously reported [15,17,18,19,20,22,24,25,26,27,28,29,30,31,32,33,37,39,40,41,42,44,45,47,49,51,52,53,55,57,58,60,61,63,64,65,67], yet notably different from many others [14,25,26,34,37,38,41,46,54,56]. This prompted us to undertake a hierarchical cluster analysis of S. officinalis leaf oil compositions in order to describe the various chemotypes of this herb.
Tucker and Maciarello described five groups based on four principal constituents: (1) camphor > α-thujone > 1,8-cineole > β-thujone; (2) camphor > α-thujone > β-thujone > 1,8-cineole; (3) β-thujone > camphor > 1,8-cineole > α-thujone; (4) 1,8-cineole > camphor > α-thujone > β-thujone; and (5) α-thujone > camphor > β-thujone > 1,8-cineole [61]. Unfortunately, while these four principal constituents describe many S. officinalis essential oils, there are other samples that are rich in α-humulene [41,56], viridiflorol [26,34], manool [34,66], or sclareol [54].
Jug-Dujaković and co-workers examined the essential oil compositions of 25 indigenous populations of S. officinalis growing in the Dalmatian region of Croatia [37]. These workers carried out a hierarchical cluster analysis based on eight principal components (α-thujone, camphor, β-thujone, 1,8-cineole, β-pinene, camphene, borneol, and bornyl acetate), and were able to delineate three chemotypes of Dalmatian sage from Dalmatia: (A) α-thujone > camphor > 1,8-cineole > β-thujone; (B) β-thujone > α-thujone > camphor ≈ 1,8-cineole; and (C) camphor > α-thujone > 1,8-cineole > camphene ≈ borneol.
Lakušić and co-workers analyzed S. officinalis essential oils in various stages of development [41]. These workers sampled two different individual plants from different geographical origin, but grown in a common garden under identical conditions. Young leaves were characterized with high concentrations of α-humulene, viridiflorol, and manool, but low concentrations of camphor or α-thujone. As leaves aged, the concentrations of α-humulene, viridiflorol, and manool dropped significantly with concomitant increases in camphor and α-thujone. A hierarchical cluster analysis showed that young leaves belonged to an α-humulene chemotype, while old leaves from the plant originating in Serbia belonged to a camphor chemotype, and old leaves from the plant originating in Croatia belonged to a thujone chemotype.
In this current work, we have carried out a hierarchical cluster analysis of 188 S. officinalis leaf essential oil compositions; the three chemical compositions presented above in conjunction with 185 analyses from the literature. A total of 26 components were used in the analysis. Based on the cluster analysis of the volatile compositions, there are five major chemotypes of Salvia officinalis: C1–C5 (see Figure 1).
The most populated chemotype, C1, is an α-thujone/camphor chemotype and represents “typical” sage oil. The C1 cluster can be further subdivided (Figure 2) into three distinct subgroups: C1a, camphor > α-thujone > β-pinene, which is equivalent to group 1 described by Tucker and Maciarello [61], type C described by Jug-Dujaković et al. [37], and type IIb described by Lakušić and co-workers [41]; C1b, α-thujone ≈ camphor > sclareol; and C1c, α-thujone > camphor > 1,8-cineole, which is equivalent to Tucker and Maciarello type 5 [61], Jug-Dujaković et al. type A [37], and Lakušić et al. type IIa [41]. Chemotype C1c averages 28.0% α-thujone, 18.6% camphor, 10.5% 1,8-cineole, and 6.4% β-thujone, and represents the “best overall” composition of sage oil [2,61]. It is noteworthy that type C1c is also represented by samples from the Dalmatian region of the Balkan Peninsula [26,37,41], as well as commercial samples from Europe [52] and Albania, Mexico, and California from this study.
The α-humulene-rich chemotype, C2, is equivalent to type I that was described by Lakušić and co-workers [41]. This chemotype can be subdivided (Figure 3) into three subgroups: C2a, α-humulene > α-thujone > camphor; C2b, 1,8-cineole ≈ α-thujone > α-humulene; and C2c, viridiflorol > manool ≈ α-thujone > α-humulene. Lakušić and co-workers had observed α-humulene concentrations to be relatively high in young leaves collected in April and May, with decreasing concentrations during late summer (August–October), and then increasing again in the autumn and winter [41]. Samples from other global locations, however, showed high α-humulene concentrations during the summer [26,48,56], and likely, then, represents a real chemotype.
The β-thujone-rich chemotype, C3, is equivalent to Tucker and Maciarello type 3 [61] and Jug-Dujaković et al. type B [37]. Chemotype C3 can be subdivided into two subroups (Figure 4): C3a, β-thujone > camphor ≈ α-thujone ≈ 1,8-cineole, and C3b, camphor > β-thujone > 1,8-cineole. Type C4, a 1,8-cineole/camphor chemotype, is equivalent to Tucker and Maciarello type 4 [61], and shows two subtypes: C4a, 1,8-cineole ≈ camphor, and C4b, 1,8-cineole >> camphor (Figure 5). Chemotype C5 (Figure 6) is a sclareol/α-thujone type.
Although C1 (thujone/camphor) is the major chemotype of S. officinalis, there are several other chemotypes and this should have a profound effect on the flavor and fragrance profile of the herb as well as any potential biological activities and medicinal uses. The overall fragrance description and the fragrance descriptions of the components of C1c type sage oils have been reported [30,67]. A perusal of the literature has not revealed any flavor or fragrance descriptions of the other sage oil chemotypes, however. Similarly, most bioactivity studies have been carried out on C1 chemotype sage oils. Savalev and co-workers have examined the butyryl- and acetyl-cholinesterase inhibitory activities of type C2a sage oils [56]; Lima and co-workers examined the cytotoxicity of a C2b type sage oil on rat hepatocytes [43]; and Abu-Darwish and co-workers carried out antifungal studies with chemotype C4b sage oils [14]. However, no C1c type sage oils were included in these studies for comparison. Russo and co-workers examined the cytotoxic activities on three different tumor cell lines of two different chemotypes of sage oil, C1b and C5 chemotypes, but there were no correlations between sage oil chemical compositions and cytotoxicities [54].

This study has revealed the presence of five major chemotypes of sage (Salvia officinalis) leaf essential oils, with several subtypes. Most sage oils belonged to the “typical”, α-thujone > camphor > 1,8-cineole, chemotype, but the essential oil compositions can vary widely and may have a profound effect on flavor and fragrance profiles as well as biological activities. It would be interesting to see if there exist differences in fragrance descriptions or in biological activities for the different chemotypes of sage essential oils.

No funding was received for the conduct of this project; the authors declare no conflicts of interest. 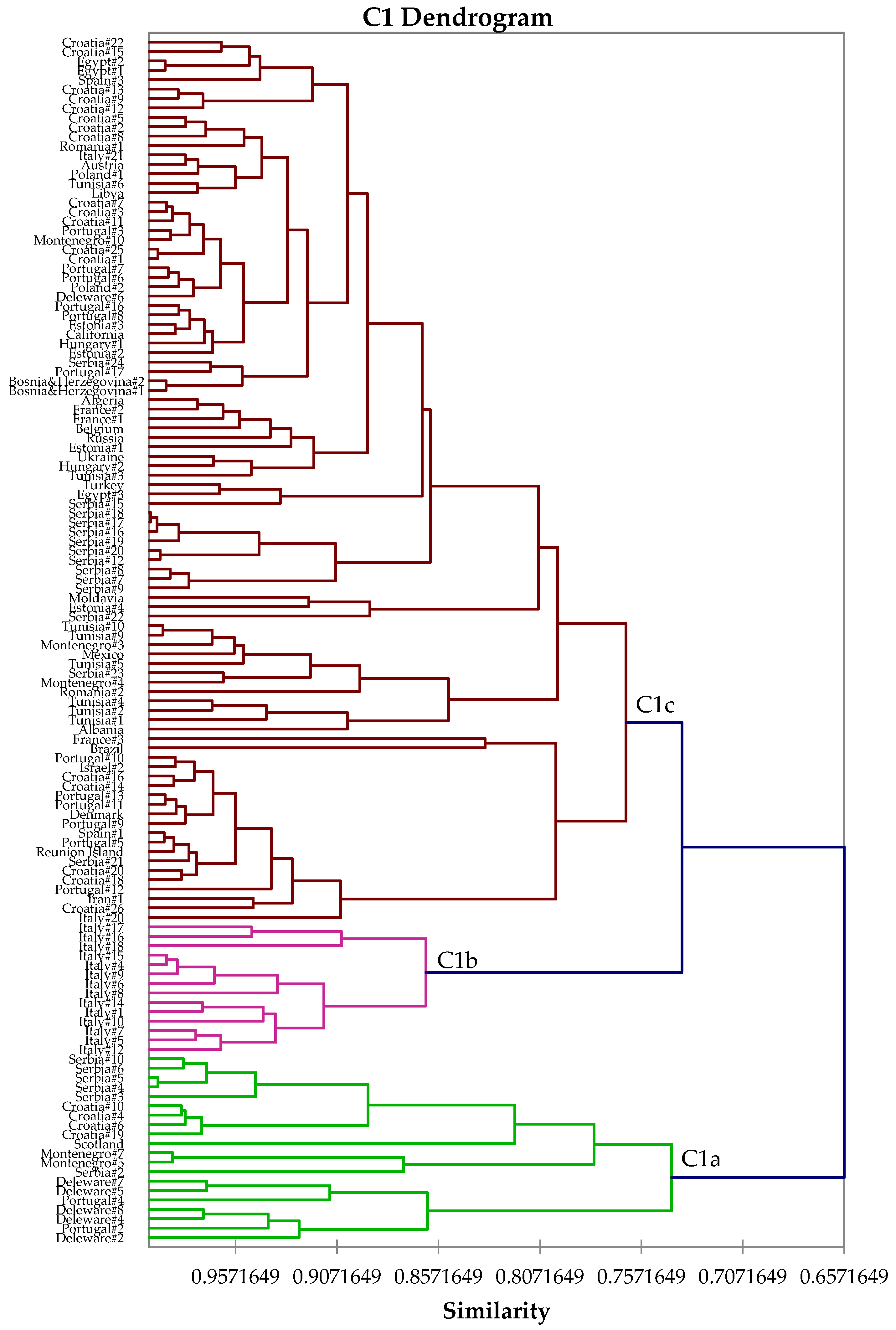