Nonspecific Feelings Expected and Experienced during or Immediately after Electroacupuncture: A Pilot Study in a Teaching Situation
Previous Article in Journal

Why We Need Minimum Basic Requirements in Science for Acupuncture Education

Objective: Post-stroke depression (PSD) is common and has a negative impact on recovery. Although many stroke patients in Taiwan have used acupuncture as a supplementary treatment for reducing stroke comorbidities, little research has been done on the use of acupuncture to prevent PSD. Accordingly, our goal is to investigate whether using acupuncture after a stroke can reduce the risk of PSD. Method: This population-based cohort study examined medical claims data from a random sample of 1 million insured people registered in Taiwan. Newly diagnosed stroke patients in the period 2000–2005 were recruited in our study. All patients were followed through to the end of 2007 to determine whether they had developed symptoms of depression. A Cox proportional hazard model was used to estimate the relative risk of depression in patients after being diagnosed as having had a stroke, with a focus on the differences in those with and without acupuncture treatment. Results: A total of 8487 newly-diagnosed stroke patients were included in our study; of these, 1036 patients received acupuncture more than five times following their stroke, 1053 patients received acupuncture 1–5 times following their stroke and 6398 did not receive acupuncture. After we controlled for potential confounders (e.g., age, sex, insurance premium, residential area, type of stroke, length of hospital stay, stroke severity index, rehabilitation and major illness–related depression), we found that acupuncture after stroke significantly reduced the risk of depression, with a hazard ratio (HR) of 0.475 (95% CI, 0.389–0.580) in frequent acupuncture users and 0.718 (95% CI, 0.612–0.842) in infrequent acupuncture users, indicating that acupuncture may lower the risk of PSD by an estimated 52.5% in frequent users and 28.2% in infrequent users. Conclusions: After we controlled for potential confounders, it appears that using acupuncture after a stroke lowers the risk of depression. Additional strictly-designed randomized controlled trials are needed to better understand the specific mechanisms relating acupuncture to health outcomes.
Keywords: post-stroke depression; acupuncture post-stroke depression; acupuncture

Strokes are the third leading cause of death and the most common cause of complex disability in Taiwan [1]. Many medical complications of stroke are common and often lead to poor clinical outcomes, such as depression, known as post-stroke depression (PSD). PSD has a high prevalence and a negative impact on stroke patients’ long-term survival and well-being [2]. Thus, it is important to reduce or prevent PSD in stroke survivors.
Many studies have evaluated various approaches to prevent PSD, including pharmacological therapy and psychotherapy. In some clinical trials, medicines such as Escitalopram and Duloxetine have shown some effectiveness in preventing PSD; however, most remedies had small treatment effect [3]. Other studies have also revealed that rehabilitation after a stroke may have positive effects in preventing PSD [4].
Traditional Chinese medicine (TCM) is classified as one form of complementary and alternative medicine (CAM) and is popular in Asian countries; for example, 52.7% of stroke patients receive both Chinese herbal remedies and acupuncture/traumatology treatment in Taiwan [5]. Some studies have reported that acupuncture may be effective in preventing PSD; however, such studies have so far been either too small or lacking big data analysis. If a case is to be made for the usefulness of acupuncture in relation to PSD, it is imperative to provide empirical evidence showing its positive effects on stroke patients’ psychological well-being.
Potential confounders related to PSD have been explored, including gender (female) [6], disabilities, comorbidities [7], stroke severity [8], pre-stroke depression [9], cognitive impairment after stroke, dysphagia [10], incontinence [10], anxiety, and social isolation at follow-up [10]. In order to evaluate the preventive effect of acupuncture after subjects have been diagnosed as having had a stroke, a more rigorous study must be performed. In response, the main purpose of this study was to investigate whether acupuncture treatment after stroke attack reduces the risk of PSD after empirically controlling for covariates during the observation period.

Our study used reimbursement claims data obtained from the National Health Insurance Research Dataset (NHIRD) in Taiwan. The NHIRD covers more than 99% of the population and has contracts with 97% of the hospitals and clinics in Taiwan [11]. The National Health Research Institute maintains and updates the NHIRD. The institute has publicly released a sub-dataset composed of claims data for 1,000,000 randomly selected insurance enrollees for research and administrative purposes. This random subgroup represents approximately 5% of the entire insured population in Taiwan. This sub-dataset, consisting of a longitudinal health insurance database for 2005 (LHID2005), was employed for this study after obtaining approval from the National Health Research Institute review committee. For data analysis, we retrieved information about patients’ characteristics and medical care records by linking ambulatory care visit claims, in-patient expenditures by admissions, and the registry for beneficiaries. Secondary data were collected and administered by the Taiwan National Institute of Family Planning (now the Bureau of Health Promotion, BHP), and approved by their IRB. All data analyzed in this study were anonymized.

Patients who were newly diagnosed with a stroke (ICD-9-CM codes: 430–434, 436–437) between 2000 and 2005 were included in this study. We excluded patients who had had a head injury before 2000 (N = 340); who had suffered from depression before their stroke (N = 1381); who were not insured or had died within 3 months of suffering the stroke (N = 256); had sought ambulatory care for depression within the first 3 months following their stroke (N = 58); or had not had an acupuncture interval for more than six months (N = 98). The study criteria, the exclusion criteria, and the follow-up procedure are presented in Figure 1.
In Taiwan, TCM doctors must finish a training course in Chinese medicine and acupuncture and pass the national examination before they are certified to practice and, thereafter, qualified for filing NHI claims for acupuncture reimbursement. We classified the stroke patients into two groups based upon their acupuncture use or non-use after their stroke: (1) acupuncture users: those who received six or more or 1–5 acupuncture treatments after being diagnosed with a stroke from 2000 to 2007 (respectively N = 1036, 12.21%; and, N = 1053, 12.41%); these were respectively called frequent and infrequent users; and (2) acupuncture non-users: those who were defined as reporting no acupuncture received after their stroke from 2000 to 2007 (N = 6398, 75.39%).
The Diagnostic and Statistical Manual (DSM) IV categorizes PSD as a “mood disorder due to a general medical condition (i.e., stroke)” with certain depressive features serving as specifiers, for example, major depressive-like episodes, manic features, or mixed features [12]. The patients were linked to the ambulatory care visit claims and inpatient expenditures by admissions claims during the years 2000–2007 to identify possible treatment for depression. The follow-up ended on the date of depression diagnosis (diagnosed according to ICD-9-CM code 296, 309, or 311, or A-code A212 or A219) in outpatient care or on the date of censoring, which was either the date of withdrawal (including death) from the NHI program or the date of the follow-up end (i.e., 31 December 2007).

A chi-square test was used to compare differences in age, sex, residential area, insurance premium, type of stroke, length of hospital stay, and the aforementioned comorbidities between groups. A Kaplan–Meier analysis was performed for censored graft survival. To assess the independent effects of acupuncture on the risk of depression, we conducted a Cox proportional hazard regression analysis with age, sex, insurance premium, urbanization level, SSI, rehabilitation after stroke in three months, and selected comorbidities adjusted simultaneously in the model. We also adjusted the urbanization level to account for the urban rural difference in accessibility to medical care in Taiwan. All statistical analyses were performed using SAS (version 9.4, SAS Institute, Inc., Cary, NC, USA), in which a p-value < 0.05 was considered statistically significant.

In conclusion, controlling for potential confounders, stroke patients who receive acupuncture may have a lower risk of PSD than those who do not. Moreover, acupuncture after a stroke may have a protective effect on depression, thus stemming further deterioration. Further strictly designed randomized controlled trials are needed to better understand the specific mechanisms of acupuncture and its impact on psychological health outcomes.

This work was supported by the Office of Research and Development at National Cheng Kung University (P.I.: Ching-Ju Chiu, Ph.D. D100-35B19).

Shuo-Ping Tseng, Yu-Ching Hsu reviewed the literature, analyzed the data, and wrote the draft of the manuscript. Ching-Ju Chiu guided the study design, had full access to all of the data in the study and takes responsibility for the integrity of the data and the accuracy of the discussion. Shang-Te Wu contributed to the discussion.

None of the authors of this report has any conflicts of interest. 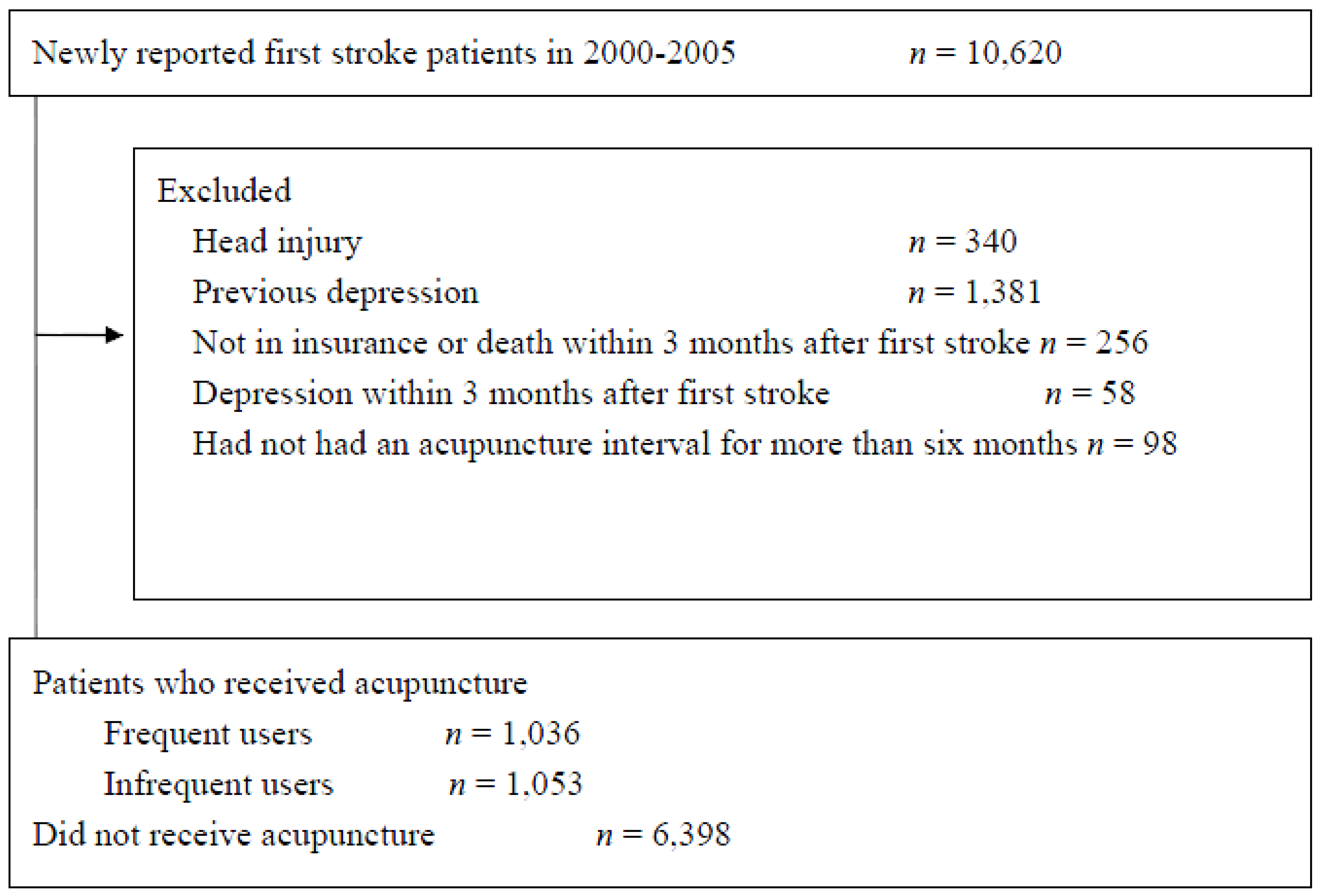 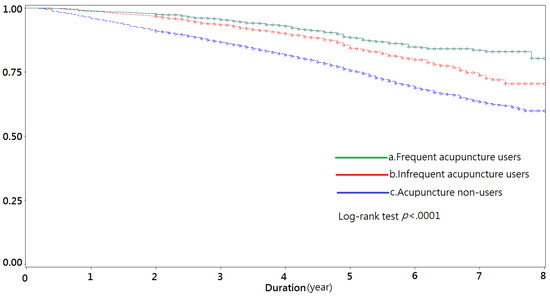