The autonomic nervous system regulates human responses to environmental change. When humans are subjected to threatening events, sympathetic neurons release catecholamines like epinephrine (E) and norepinephrine (NE) to engage the fight-or-flight response. Adrenergic receptors (AR) are involved in stress-induced physiological processes through binding with catecholamines to regulate vascular resistance and heart rate. These neurohormonal mechanisms are mediated from the sympathetic nervous system, such as baroreflex sensitivity for adrenergic signaling [1].
Catecholamines are not only important for circulation physiology but are also vital for several emergency situations, such as cardiopulmonary arrest and septic shock. The latest version of the advanced cardiac life support (ACLS) guidelines, focusing on cardiopulmonary resuscitation published by the American Heart Association in 2019, suggests up to 1 mg E to be administered intravenously (IV) every 3–5 min in the event of cardiac arrest [2]. E binds to β1 AR, stimulating myocardial contraction, enabling patients with cardiac arrest to maintain mean arterial pressure and regain pulse recovery [3]. NE mainly binds to α receptors to induce vasoconstriction and blood pressure elevation; however, reflex bradycardia occurs simultaneously and thus restricts the clinical use of NE in cardiac arrest [4]. On the other hand, NE is strongly recommended as the first-choice vasopressor in cases of sepsis and septic shock [5], with an average of 8–12 μg/min IV to be continuously infused.
Nevertheless, a dysregulated release of catecholamines may also lead to severe cardiac toxicities. Administration of high dose isoproterenol, which is a synthetic catecholamine and β-AR agonist, leads to severe myocardial injury in rats [6]. This adverse effect is induced by oxidative stress in the myocardium [7]. The most common disease associated with catecholamine dysregulation is pheochromocytoma which is a persistent catecholamine-secreting tumor originating from chromaffin cells. The pheochormocytoma has adrenergic, noradrenergic, or dopaminergic biochemical phenotypes. Noradrenergic phenotype is more likely to present with hypertension and tachycardia, thus leading to cardiac dysfunction, compared to others [8].
Moreover, destruction of nucleus tractus solitarii (NTS) in the brainstem, involved in the autonomic center in the central nervous system, may also contribute to catecholamine dysregulation. Previously, we found that there was an acute increase in catecholamines, including E and NE, in peripheral blood following the administration of 6-hydroxydopamine (6-OHDA) to induce brainstem lesions in rats, which then led to an acute elevation of blood pressure [9]. This caused cardiac dysfunction, myocardial damage, and pulmonary edema within 7 h. Moreover, during this process, α1 receptors played a more significant role than β1 receptors enabling prazosin, a selective α1 receptor antagonist, to facilitate preservation of cardiac output (CO) and reverse pulmonary hemorrhagic edema [10]. Diseases involving brainstem deterioration may present similar symptoms such as cardiopulmonary dysfunction. For instance, traumatic brain injuries may also induce systolic dysfunction [11]. Decompensation or death, due to respiratory distress, and as a consequence of pulmonary edema, was observed within 4 days due to impairment of NTS from brainstem encephalitis (i.e., severe enterovirus 71 infection) [12].
Although some studies have compared the use of standard and high doses of E in cardiac arrest patients, reporting no significant higher risk of complications [13,14]; there are limited studies reporting on the adverse effects induced by catecholamine overdose on the cardiopulmonary system. To understand whether very high dose catecholamine treatment is related to severe dysfunction and damage of cardiovascular and pulmonary systems, normal rats were administered E or NE or E+NE IV continuously to simulate and evaluate an experimental model, testing the effects of external excessive catecholamine administration, on cardiopulmonary pathological and functional changes. We hypothesized that catecholamine overdose would lead to severe cardiopulmonary impairment. The difference in sensitivity to catecholamine-induced injuries between the right and left ventricles (RV and LV) was also evaluated.

After shaving the anesthetized rats’ neck fur, a section of the right jugular vein was separated from connective tissues, and the catheter was slowly moved forward and rotated into the RV. Similarly, the LV catheter also entered the LV via the left internal carotid artery. During the experiment, the rats’ heart rates and ventricular pressures were continuously recorded using a PowerLab data acquisition system and LabChart software (ADInstruments Inc., Colorado Springs, CO, USA) [17,18].

2.6. Histology and Quantitative Analysis of Immunohistochemistry

After the rats were sacrificed, the lungs and hearts were removed immediately. They were rinsed with iced 0.9% saline, cleared of blood and connective tissues, gently blotted with filter paper, and then weighed. Lung and heart tissue were placed in 10% formalin for 5 days, then embedded in paraffin for immunostaining.
The sections were immunostained by applying the Novolink Polymer Detection Systems (Leica Biosystems Newcastle Ltd., Newcastle Upon Tyne, UK) and incubated with diluted rabbit primary antibody, and then with anti-rabbit Poly-HRP-IgG reagent (Novolink Polymer) to recognize tissue-bound rabbit primary antibodies [19]. Finally, the sections were counterstained with hematoxylin and a coverslip was put in place. Results were observed using a BX51P polarizing microscope (OLYMPUS Corp., Center Valley, PA, USA).
We used the following rabbit polyclonal primary antibodies: anti-connexin43 (Cx43)/GJA1 antibody (diluted 1:200 for heart and 1:400 for lungs, Abcam, #ab11370, Cambridge, UK), anti-receptor for advanced glycation end products (RAGE) antibody (diluted 1:200 for lungs, GeneTex Inc., #GTX23611, Irvine, CA, USA), and anti-TNNT2 (cardiac) antibody (diluted 1:100 for heart, Cloud-Clone Corp., #PAD232Ra01, Houston, TX, USA). To assess the extent of Cx43 lateralization and troponin T [10] in cardiac tissue, we randomly selected three fields (magnification: 10 × 40) and counted the ratio of the number of Cx43-positive and Troponin T-positive cells in all cardiac cells in the RV, septum, and LV lateral wall areas of each rat heart section. The ratio of the number of Cx43-positive cells [9,10,20] and RAGE in all pulmonary cells in lung tissues [21] were calculated in three randomly selected fields of view (magnification: 10 × 40) selected from each lung section.

As described in our previous studies [9,10], M-mode tracings and recordings were obtained from the parasternal short axis view for calculating interventricular septum thickness at end-diastole, LV internal dimension at end-diastole and end-systole, and posterior wall thickness at end-diastole, end-diastolic and end-systole volume, CO, ejection fraction (EF), fractional shortening, and LV mass. A pulsed-wave Doppler sample volume was positioned across the tricuspid and mitral valves, from the four-chamber view, to evaluate the diastolic function with early diastolic peak E wave and atrial filling peak A wave. Aortic flow was measured from the ascending aorta with the suprasternal view.

3.1. Overdose of NE and/or E Affected Heart Rate and Survival

To measure whether E or NE concentration was significantly elevated after infusion with 0.9% normal saline (sham), E, NE, and E+NE in respective groups for 6 h, the rats were sacrificed and the concentration of E and NE in plasma was measured (Figure 1a). The plasma E concentrations in the E and E+NE groups were significantly increased compared to those in the sham and NE groups (p < 0.05). The plasma NE concentration in the NE and E+NE groups was significantly raised compared to the other two groups (p < 0.05).
To examine whether overdose of E or NE would cause cardiomyopathy, the heart weight to body weight ratio was calculated, and showed a significant increase in the E, NE, and E+NE groups compared to that of the sham group after 6 h infusion (p < 0.05, Figure 1b). During the 6 h catecholamine injection, differences in heart rate between groups were compared at different time points (0, 1, 3, and 6 h time points, Figure 1c). The heart rate in the three treatment groups was significantly higher than that in the sham group after 1, 3, and 6 h of catecholamine injection (p < 0.05). In all the experimental groups, heart rate increased rapidly in the first hour of infusion, and reached a plateau at approximately the 3 h time point. At 6 h, only the NE group maintained a heart rate similar to the 3 h time point, while the E and E+NE groups showed a mild decrease in heart rate.
To understand whether the cardiomyopathy and change in heart rate may have influenced rat’s survival, hourly survival rates were also recorded during the infusion time (Figure 1d). After infusion of NE in the NE and E+NE group, lower survival rates were observed, with the E+NE group showing the lowest rat survival.

To determine whether overdose of E and NE would influence the rats’ left ventricular systolic and diastolic function, echocardiography was used to record physiological heart function. Using M-mode images (Figure 2a), we found that left ventricular internal dimension in systole and diastole markedly declined in the NE and E+NE group but not in the E group after 6 h infusion (Table S1).
According to echocardiography results, CO, stroke volume (SV), and EF could be calculated for systolic function (Figure 2b), while peak early diastolic mitral valve velocity (MV E Vel) and peak early diastolic/systolic mitral valve velocity could be presented as diastolic function (Figure 2c). We found that the NE group showed significantly reduced CO and SV compared to the sham group (p < 0.05). The E group showed only decreased SV compared to the sham group (p < 0.05) but the two groups were not different for CO. The combination of E and NE impaired systolic function, including SV and CO, more significantly than the E group (p < 0.05, Figure 2b). For diastolic function, a significant reduction in peak early diastolic/systolic mitral valve velocity and MV E Vel were found in the E, NE, and E+NE groups compared to the sham group at 6 h (p < 0.05). Lower MV E Vel was observed in the NE and E+NE groups than in the E group (Figure 2c). Additionally, we observed that interventricular septum thickness, left ventricular posterior wall thickness, and the total left ventricular mass, significantly increased in the NE and E+NE groups when compared to the sham group (Table S1).

3.3. Overdose of NE and/or E Led to Presence of Cardiac Damage Markers

Cardiac troponin release has been measured to diagnose different types of acute cardiac injuries while the lateralization of Cx43 can be observed in many pathological heart diseases [22,23,24]. Immunohistochemical staining was performed to detect troponin T and Cx43 in cardiac tissue after 6 h infusion of catecholamine (Figure 3a,b). Our results showed that the expression of troponin T and Cx43 was significantly increased in the E and NE groups and the E+NE group showed greater changes in the RV, septum, and LV lateral walls compared to the sham group. In these three parts, lateralization of Cx43 was also raised in the NE and E+NE groups and the damage appeared in whole ventricular cardiac muscles rather than specific regions (Figure 3a).

3.4. Overdose of NE rather than E Led to Pulmonary Edema and Damage

Because of the acute injury of cardiac muscle sustained from catecholamine overdose, we also assessed whether it would cause severe pulmonary edema and damage. After a 6 h catecholamine injection, the lung tissue was collected, and hematoxylin-and-eosin staining was performed to observe histological changes (Figure 4a). A thickened alveolar wall was observed in the E, NE, and E+NE groups compared to the sham group. However, interstitial edema was found only in the NE and E+NE groups. The NE and E+NE groups showed a significant increase in their lung weight to body weight ratio compared to the other two groups (Figure 4b). Given that previous studies reported that RAGE downregulation and Cx43 upregulation may play potential roles in acute lung injuries [25,26], we assessed changes in the expression of RAGE and Cx43 in the lung tissue after 6 h continuous catecholamine infusion, via immunohistochemical staining (Figure 4c). In the E, NE, and E+NE groups, the ratio of RAGE-positive cells in all pulmonary cells significantly decreased (p < 0.05) and the ratio of Cx43-positive cells in total pulmonary cells significantly increased (p < 0.05) compared to the sham group (Figure 4d).

3.5. RV Was More Sensitive and More Vulnerable to Toxicity of Catecholamine Overdose 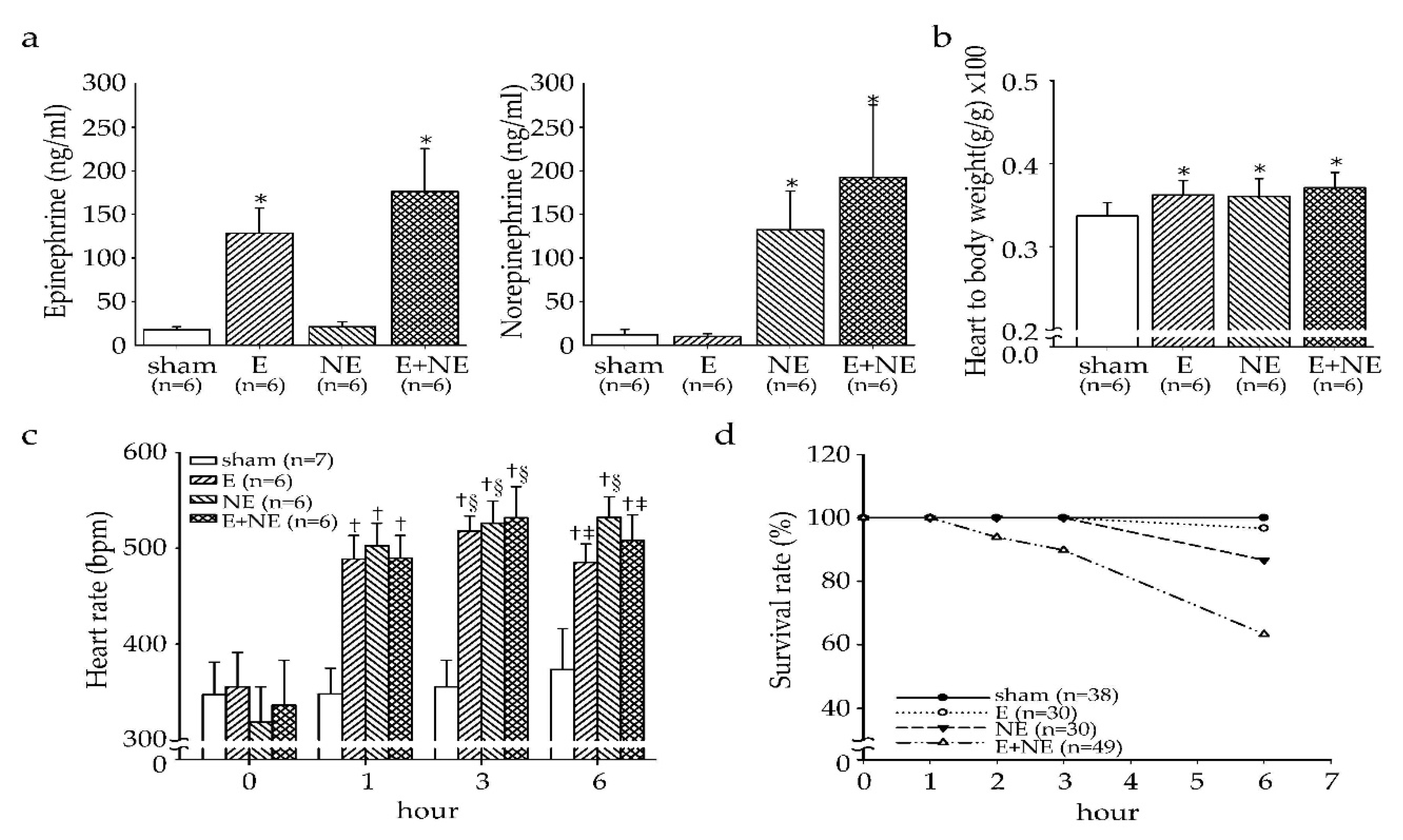 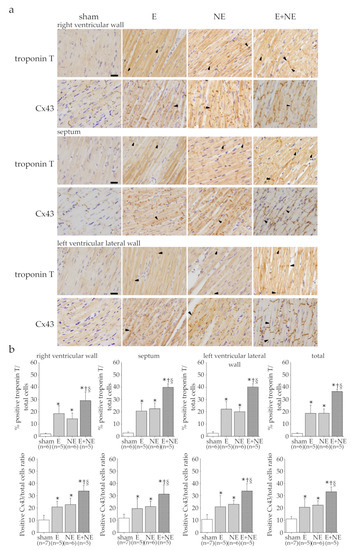 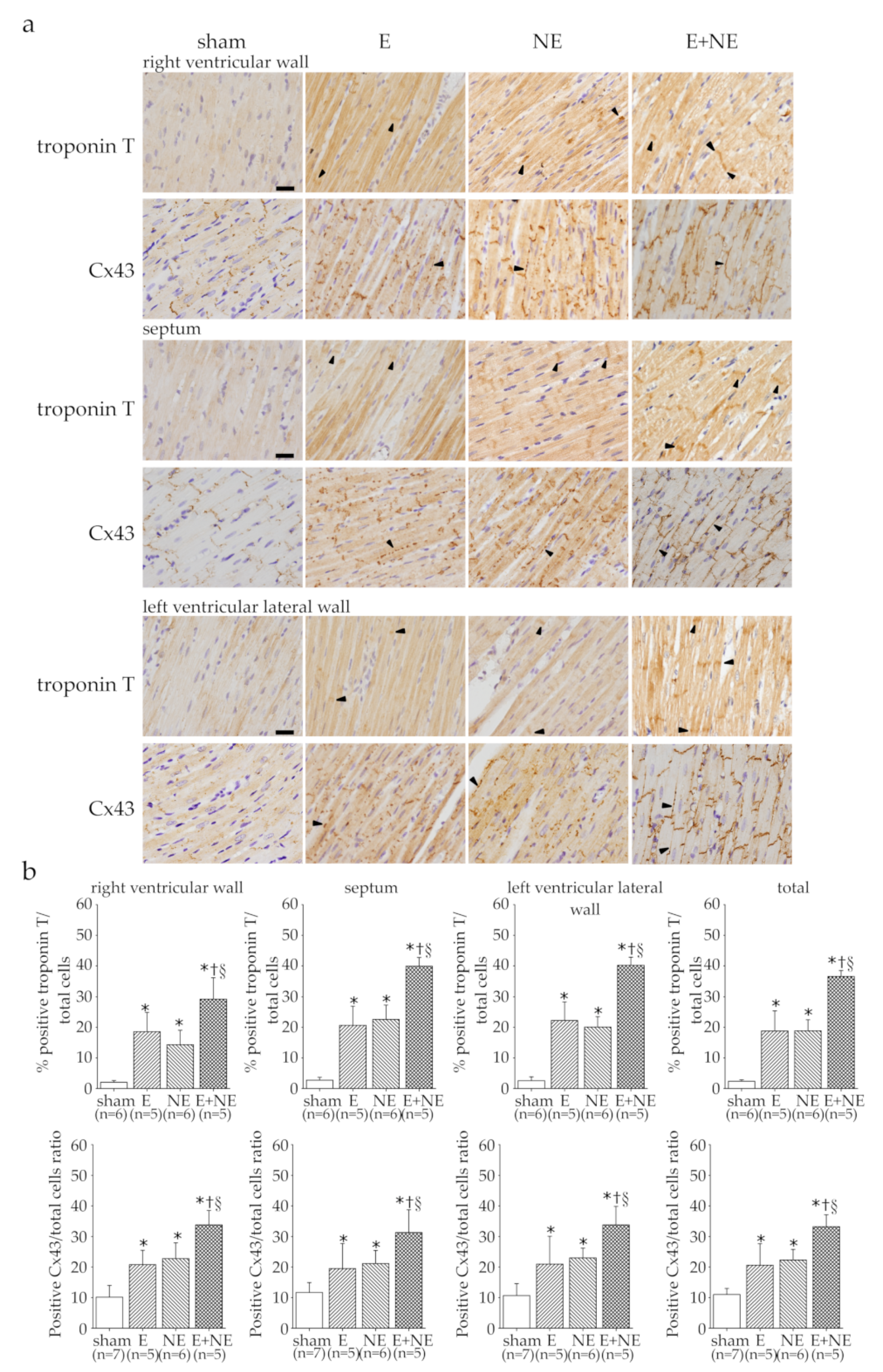 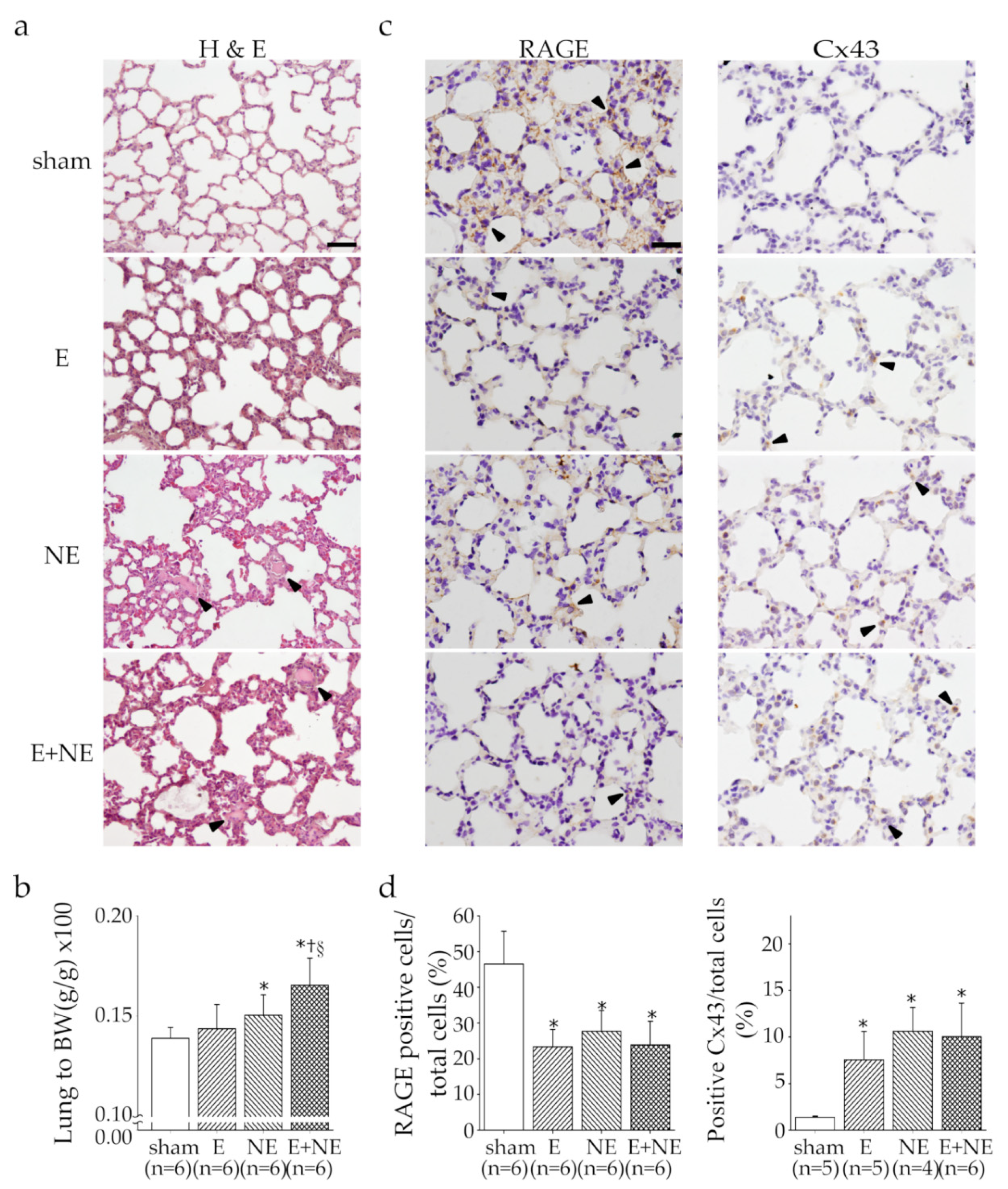 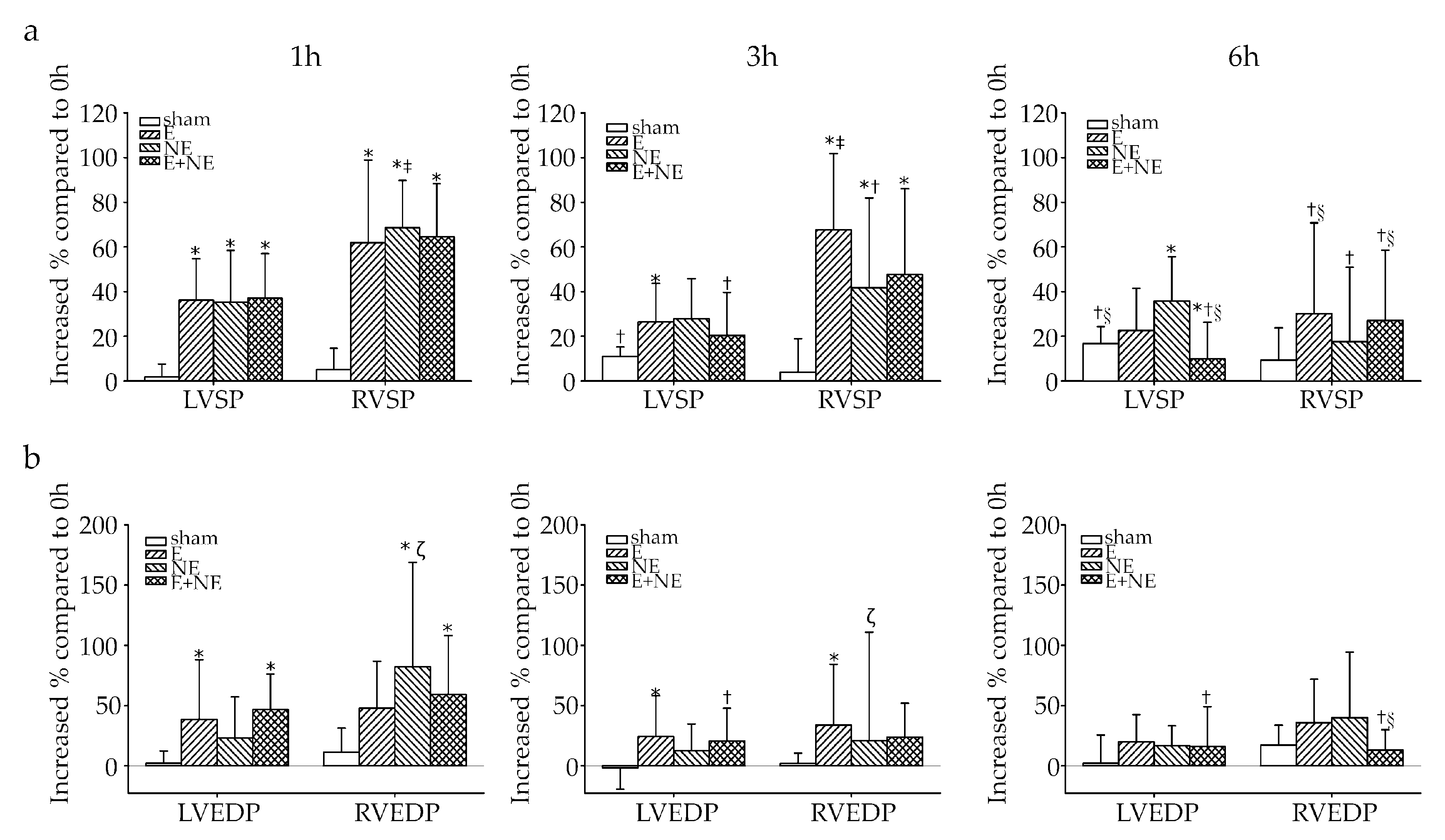