Acknowledgement to Reviewers of Toxics in 2019

Few studies have measured pyrethroid residue concentrations in food items consumed by adults in their daily environments. In a further analysis of study data, the objectives were to determine pyrethroid residue levels in single, solid food items consumed by adults and to estimate dietary pyrethroid exposures and intake doses per food item. A total of 50 adults collected 782 duplicate-diet solid food samples over a six-week monitoring period in North Carolina between 2009 and 2011. Of these samples, 188 contained a single, solid food item (i.e., lasagna). Levels of eight pyrethroids were quantified in the 188 food items using LC–MS/MS. At least one pyrethroid was detected in 39% of these food items. Cis-permethrin (17%), bifenthrin (15%), trans-permethrin (14%), and deltamethrin (14%) were detected the most often. Cyfluthrin, cyhalothrin, cypermethrin, and esfenvalerate were all detected in <6% of the samples. The highest residue level was found in a pizza sample containing both cis-permethrin (96.4 ng/g) and trans-permethrin (73.7 ng/g). For cis-permethrin, median residue levels (≥LOQ) were significantly higher (p = 0.001) in foods that contained a fruit/vegetable compared to foods that did not. For individual pyrethroids, the participants’ maximum dietary intake doses in the single food items ranged from 38.1 (deltamethrin) to 939 ng/kg/day (cis/trans-permethrin). View Full-Text
Keywords: insecticides; food; diet; humans; exposure; intake dose; risk assessment insecticides; food; diet; humans; exposure; intake dose; risk assessment
►▼ Show Figures 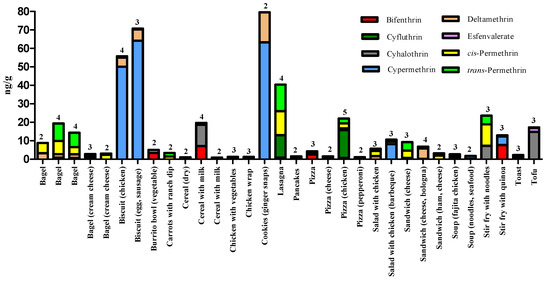