Collection of Anthropogenic Litter from the Shores of Lake Malawi: Characterization of Plastic Debris and the Implications of Public Involvement in the African Great Lakes

Anthropogenic debris is an environmental problem that affects beaches and coastlines worldwide. The abundance of beach debris is often documented with the use of public volunteers. To date, such community participations have been largely confined to the marine environment, but the presence and impact of anthropogenic debris on freshwater shorelines has been increasingly recognized. Our study presents the first such information from the African Great Lakes, specifically Lake Malawi. A total of 490,064 items of anthropogenic litter were collected by over 2000 volunteers in a clean-up campaign that took place annually between 2015 and 2018. Approximately 80% of the anthropogenic debris was comprised of plastic litter, with plastic carrier bags being the most common item. The dominance of plastic litter, and in particular the presence of plastic bags, which have subjected to bans in some African countries, is discussed. The broader implications of citizen science in the African Great Lakes area is also discussed. View Full-Text
Keywords: plastics; plastic debris; African great lakes; freshwater; beach clean-up; citizen science plastics; plastic debris; African great lakes; freshwater; beach clean-up; citizen science
►▼ Show Figures 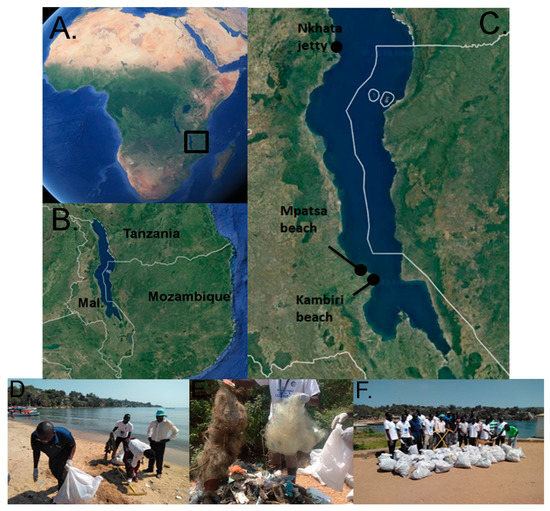 Mayoma, B.S.; Mjumira, I.S.; Efudala, A.; Syberg, K.; Khan, F.R. Collection of Anthropogenic Litter from the Shores of Lake Malawi: Characterization of Plastic Debris and the Implications of Public Involvement in the African Great Lakes. Toxics 2019, 7, 64.


Mayoma BS, Mjumira IS, Efudala A, Syberg K, Khan FR. Collection of Anthropogenic Litter from the Shores of Lake Malawi: Characterization of Plastic Debris and the Implications of Public Involvement in the African Great Lakes. Toxics. 2019; 7(4):64.