The purpose of this study was to investigate the toxicity and the distribution of mercury (Hg) in the main tissues of freshwater fish (Oreochromis niloticus) after being exposed to water containing Hg(II). A sample group of 10 fish, of mean weight 80–100 g wet weight, were exposed to different concentrations of Hg (0.0012; 0.0049; 0.0141; 0.0524; 0.1126; and 0.5110 mg-HgII/L) for 72 h under controlled conditions using the static method in ponds. A control medium was also prepared in two replications. Mortality of fish was closely monitored, and the test was repeated three times. For the toxicity test, observations were based on behavior, mortality, and anatomical pathology. The methodology was based on the OECD guidelines for testing of chemicals and lethal concentration (LC50) and particularly using the probit method. Thus, the mean value was obtained from two replications and then further calculated by a software (MiniTab® 16 version). Prior to analysis, samples were first lyophilized. The total concentration of Hg accumulation in the fish organs was analyzed using heat-vaporization atomic absorption spectrometry (HV-AAS) and a MA2000 automatic mercury analyzer. Results showed that toxicity (LC50) of freshwater fish was 0.1435 mg-Hg(II)/L. The internal organs showed some pathological changes including pale gills, anemic eyes, and a whitish body color after the exposure. Furthermore, histopathologically, exposure to mercury might also affect other organs, such as gills, liver, and hepatopancreas. Mercury was found in trace amounts, and its accumulation was found to be at least in the gills. Meanwhile, the highest accumulation was found in the muscle tissue with approximately 5.7183 µg/g dry weight. If they are put in order, the mercury accumulation in the tissue organs was varied from the highest to lowest one: Muscle > eye > bone > head > gill. Finally, it can be concluded that the Hg exposure could affect the histopathological condition of the tested fish. View Full-Text
Keywords: exposure; accumulation; histopathology; mercury; LC50 exposure; accumulation; histopathology; mercury; LC50
►▼ Show Figures 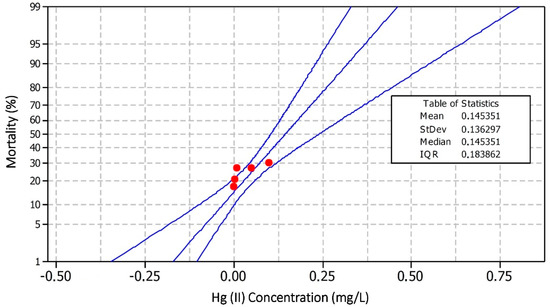