The worldwide production of synthetic chemicals, including endocrine disruptor chemicals (EDCs), such as Bisphenol A (BPA) has increased significantly in the last two decades. Human exposure to BPA, particularly through ingestion, is continuous and ubiquitous. Although, considered a weak environmental estrogen, BPA can induce divergent biological responses through several signaling pathways, including carcinogenesis in hormone-responsive organs. However, and despite the continuous increase of tumor cell-resistance to therapeutic drugs, such as doxorubicin (DOX), information regarding BPA drug interactions is still scarce, although its potential role in chemo-resistance has been suggested. This study aims to assess the potential interactions between environmentally relevant levels of BPA and DOX at a therapeutic dosage on Hep-2 and MRC-5 cell lines transciptome. Transcriptional effects in key-player genes for cancer biology, namely c-fos, p21, and bcl-xl, were evaluated through qRT-PCR. The cellular response was analyzed after exposure to BPA, DOX, or co-exposure to both chemicals. Transcriptional analysis showed that BPA exposure induces upregulation of bcl-xl and endorses an antagonistic non-monotonic response on DOX transcriptional effects. Moreover, the BPA interaction with DOX on c-fos and p21 expression emphasize its cellular specificity and divergent effects. Overall, Hep-2 was more susceptible to BPA effects in a dose-dependent manner while MRC-5 transcriptional levels endorsed a non-monotonic response. Our data indicate that BPA environmental exposure may influence chemotherapy outcomes, which emphasize the urgency for a better understanding of BPA interactions with chemotherapeutic agents, in the context of risk assessment. View Full-Text
Keywords: Bisphenol A; doxorubicin; Hep-2 cell line; MRC-5 cell line; drug interaction; gene transcription Bisphenol A; doxorubicin; Hep-2 cell line; MRC-5 cell line; drug interaction; gene transcription
►▼ Show Figures 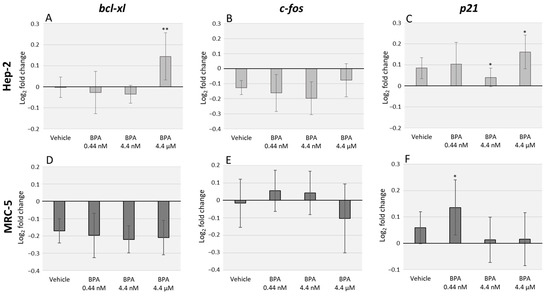