Bisphenol S (BPS) is a common replacement for bisphenol A (BPA) in plastics, which has resulted in widespread human exposure. Type 1 diabetes (T1D) is an autoimmune disease resulting from pancreatic β-cell destruction and has been increasing in incidence globally. Because of the similarities (e.g., endocrine disrupting) between BPS and BPA, and the fact that BPA was previously shown to accelerate T1D development in female non-obese diabetic (NOD) mice, it was hypothesized that BPS could contribute to the increasing T1D incidence by altering immunity with sex-biased responses. Adult female non-obese diabetic (NOD) mice were orally administered BPS at environmentally relevant doses (3, 30, 150 and 300 μg/kg), and males were given 0 or 300 μg/kg BPS. Females following 30 μg/kg BPS treatment on a soy-based diet had significantly delayed T1D development at the end of the study and decreased non-fasting blood glucose levels (BGLs) during the study. In contrast, BPS-exposed males on a soy-based diet showed an increased insulin resistance and varied BGLs. This might be a mixture effect with phytoestrogens, since males on a phytoestrogen-free diet showed improved glucose tolerance and decreased insulin resistance and CD25+ T cells. Additionally, while BPS altered BGLs in soy-based diet mice, minimal effects were observed concerning their immunotoxicity. Thus, BPS had sex- and diet-dependent effects on T1D and glucose homeostasis, which were likely caused by other mechanisms in addition to immunomodulation. View Full-Text
Keywords: Bisphenol S; type 1 diabetes; NOD mice; immunomodulation; glucose homeostasis; adult exposure; phytoestrogens Bisphenol S; type 1 diabetes; NOD mice; immunomodulation; glucose homeostasis; adult exposure; phytoestrogens
►▼ Show Figures 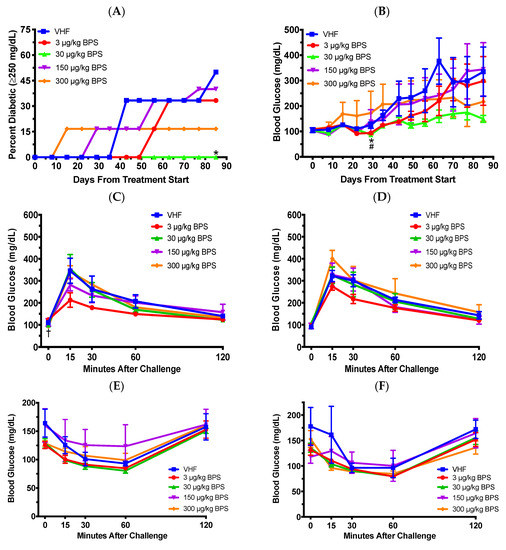