Correction: Takaoka, S., et al. Survey of the Extent of the Persisting Effects of Methylmercury Pollution on the Inhabitants around the Shiranui Sea, Japan. Toxics 2018, 6, 39
Next Article in Special Issue

Radiocarbon Tracers in Toxicology and Medicine: Recent Advances in Technology and Science
Previous Article in Journal

A Review of Biomonitoring of Phthalate Exposures

Phthalates (diesters of phthalic acid) are widely used as plasticizers and additives in many consumer products. Laboratory animal studies have reported the endocrine-disrupting and reproductive effects of phthalates, and human exposure to this class of chemicals is a concern. Several phthalates have been recognized as substances of high concern. Human exposure to phthalates occurs mainly via dietary sources, dermal absorption, and air inhalation. Phthalates are excreted as conjugated monoesters in urine, and some phthalates, such as di-2-ethylhexyl phthalate (DEHP), undergo secondary metabolism, including oxidative transformation, prior to urinary excretion. The occurrence of phthalates and their metabolites in urine, serum, breast milk, and semen has been widely reported. Urine has been the preferred matrix in human biomonitoring studies, and concentrations on the order of several tens to hundreds of nanograms per milliliter have been reported for several phthalate metabolites. Metabolites of diethyl phthalate (DEP), dibutyl- (DBP) and diisobutyl- (DiBP) phthalates, and DEHP were the most abundant compounds measured in urine. Temporal trends in phthalate exposures varied among countries. In the United States (US), DEHP exposure has declined since 2005, whereas DiNP exposure has increased. In China, DEHP exposure has increased since 2000. For many phthalates, exposures in children are higher than those in adults. Human epidemiological studies have shown a significant association between phthalate exposures and adverse reproductive outcomes in women and men, type II diabetes and insulin resistance, overweight/obesity, allergy, and asthma. This review compiles biomonitoring studies of phthalates and exposure doses to assess health risks from phthalate exposures in populations across the globe. View Full-Text
Keywords: phthalate; DEHP; biomonitoring; human exposure; toxicity; reproductive phthalate; DEHP; biomonitoring; human exposure; toxicity; reproductive
►▼ Show Figures 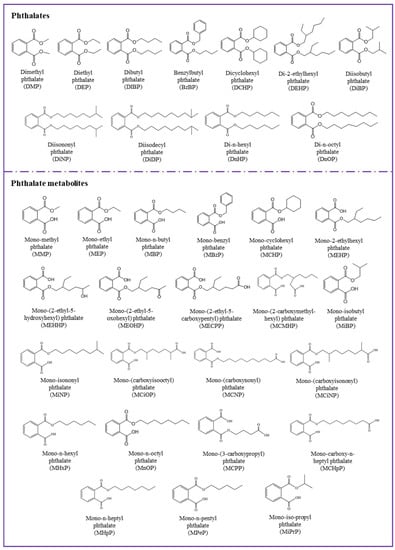