Fate of Chloromethanes in the Atmospheric Environment: Implications for Human Health, Ozone Formation and Depletion, and Global Warming Impacts
Previous Article in Journal

:
Estimation of carcinogenic potency based on analysis of 16 polycyclic aromatic hydrocarbons (PAHs) ranked by U.S. Environmental Protection Agency (EPA) is the most popular approach within scientific and environmental air quality management communities. The majority of PAH monitoring projects have been focused on particle-bound PAHs, ignoring the contribution of gas-phase PAHs to the toxicity of PAH mixtures in air samples. In this study, we analyzed the results of 13 projects in which 88 PAHs in both gas and particle phases were collected from different sources (biomass burning, mining operation, and vehicle emissions), as well as in urban air. The aim was to investigate whether 16 particle-bound U.S. EPA priority PAHs adequately represented health risks of inhalation exposure to atmospheric PAH mixtures. PAH concentrations were converted to benzo(a)pyrene-equivalent (BaPeq) toxicity using the toxic equivalency factor (TEF) approach. TEFs of PAH compounds for which such data is not available were estimated using TEFs of close isomers. Total BaPeq toxicities (∑88BaPeq) of gas- and particle-phase PAHs were compared with BaPeq toxicities calculated for the 16 particle-phase EPA PAH (∑16EPABaPeq). The results showed that 16 EPA particle-bound PAHs underrepresented the carcinogenic potency on average by 85.6% relative to the total (gas and particle) BaPeq toxicity of 88 PAHs. Gas-phase PAHs, like methylnaphthalenes, may contribute up to 30% of ∑88BaPeq. Accounting for other individual non-EPA PAHs (i.e., benzo(e)pyrene) and gas-phase PAHs (i.e., naphthalene, 1- and 2-methylnaphthalene) will make the risk assessment of PAH-containing air samples significantly more accurate.
Keywords:
polycyclic aromatic hydrocarbons; toxic equivalency factor; air samples; gas and particle phase PAHs

Gas- and particle-phase PAH concentrations were measured during several projects aimed at the characterization of: urban ambient air (A-1, A-2), biomass burning (B-1), meat cooking (M-1), engine exhaust (E1–E5), traffic emissions in a road tunnel (T-1, T-2), and mining operations (Mi-1, Mi-2) (Table 1). In total, 325 filter and XAD samples (650 individual samples) were collected, extracted, and analyzed. Detailed descriptions of sampling campaigns can be found in previously published papers and reports (Table 1). Briefly, particulate matter (PM) was collected using medium and high-volume samplers at different flow rates depending on the project (Table 1). TIGF filters (Fiber Film T60A20, PALL Life Sciences, Ann Arbor, MI, USA) were used to collect PM for PAH analysis. Gas-phase semi-volatile PAHs were collected with XAD-4 resin cartridges that were placed downstream of the filters.
After sampling, each filter and XAD cartridge was packed into pre-cleaned aluminum foil, sealed in secure static-sensitive double-track zipper bags (Uline, Pleasant Prairie, WI, USA), and transported in a cooler with blue ice to DRI, where it was stored at −20 °C until extraction and analysis. A detailed description of the extraction and GC-MS analysis are described elsewhere [13,79].

To estimate the carcinogenic potency of analyzed PAHs, TEF values proposed by Nisbet and LaGoy [51] were applied. TEFs are widely used to calculate toxicities of PAH mixtures based on the toxicity of a specific PAH compound relative to the toxicity of the reference compound—benzo(a)pyrene. The potential cancer risk associated with exposure to PAH mixtures is calculated by summing up the concentrations of individual PAH compounds, multiplied by their TEF values (Table S1). TEF values were not available for all 88 PAHs measured in this study. TEFs have been determined for only 17 PAHs [51], including the 16 EPA priority PAHs [acenaphthylene, acenaphthene, fluorine, phenanthrene, anthracene, fluoranthene, pyrene, benz(a)anthracene, chrysene, benzo(b)fluoranthene, benzo(k)fluoranthene, benzo(a)pyrene, dibenz(a,h)anthracene, benzo(ghi)perylene, indeno(1,2,3-cd)pyrene), and 2-methylnaphthalene (Table S1)]. TEFs for the remaining 71 PAHs were estimated based on the similarity of a compound to one of the 17 PAHs whose TEFs are known. Compounds were considered similar if they are close isomers, have the same number of aromatic rings, GC-MS response factors, and similar molecular structure. For example, for 1-methylnaphthalene, the TEF of 2-methylnaphthalene (0.001) [51] was used since these compounds are isomers and are structurally similar. The same TEF (0.001) was applied for dimethyl- and trimethylnaphthalenes, because GC-MS response factors of these PAHs are similar to methylnaphthalene and because chemical structures of these compounds differ only by the presence of one or two methyl (-CH3) groups. The TEF proposed for anthracene (0.01) was used to calculate the BaPeq concentrations for methylanthracenes and different benz(a)anthracenes like 7-methylbenz(a)anthracene and 7,12-dimethylbenz(a)anthracene. In the case of fluoranthenes [1 + 3-methylfluoranthene, 4-methylfluoranthene, benzo(ghi)fluoranthene, etc.], TEF of fluoranthene (0.001) was applied. TEFs of four isomers of dibenzopyrene [dibenzo(a,e)pyrene (TEF: 1), dibenzo(a,l)pyrene (TEF: 10), dibenzo(a,i)pyrene (TEF: 10), dibenzo(a,h)pyrene (TEF: 10)] were assigned using values provided by Office of Environmental Health Hazard Assessment (OEHHA) report [80]. It has to be emphasized that TEFs assigned based on analytical criteria described above may not adequately reflect the real toxicological properties of non-EPA PAHs. Since to our knowledge, there are no toxicological studies on these compounds, we used this approach to estimate the relative importance of the non-EPA PAHs and selected those that deserved a more thorough toxicological characterization. It should be also noted that 75% of the assigned TEFs (Table S2) had the lowest TEF value (0.001), which makes overestimation of their toxicity less likely. Table S2 summarizes TEFs that were assigned to the 88 PAHs measured in this study. BaPeq concentrations of PAH mixtures in different samples were then calculated using the following formula: where Ci—concentration of PAH compound i (in ng m3); TEFi—assigned toxic equivalency factor (Table S2).
Total BaPeq concentrations of 16 EPA priority PAHs (∑16BaPeq) were calculated using the same formula, but this was applied only to the 16 EPA PAHs [51].

In the present study, the data of 13 different projects (650 filters and XAD cartridges, total) on the analysis of 88 gas and particle-phase PAHs were used to calculate the total BaPeq toxicity by applying a widely used TEF approach. Obtained BaPeq values were compared with those calculated for 16 EPA priority particle-phase PAHs, and we found that 16 particle-bound EPA PAHs were responsible for only 14.4% on average for the range in all projects (0.2–41.9%) and the health risk of analyzed samples was likely to have been hugely underestimated. Although there was a significant linear relationship between PM∑16BaPeq and PM∑88BaPeq as well as between PM∑16BaPeq and (PM+Gas)∑88BaPeq for a majority of the analyzed projects, the potential carcinogenic toxicity based on BaPeq concentrations for only 16 EPA particle-phase PAHs must be interpreted carefully, especially considering possible synergistic effects of PAH mixtures. Our findings on the analysis of BaPeq values for 88 gas and particle phase individual PAH compounds showed that the contribution of non-EPA PAHs such as 1- and 2-methylnaphthlalenes, benzo(e)pyrene, dibenzo(a,i)pyrene, dibenzo(a,h)pyrene, is substantial to carcinogenic potency of analyzed air samples.
Our results stress the need for data on TEF values for additional PAHs, and the incorporation of these compounds into the health risk assessment. Measurements of gas-phase PAHs are also recommended, because of the strong contribution of the gas phase to the total BaPeq toxicity of atmospheric PAHs. 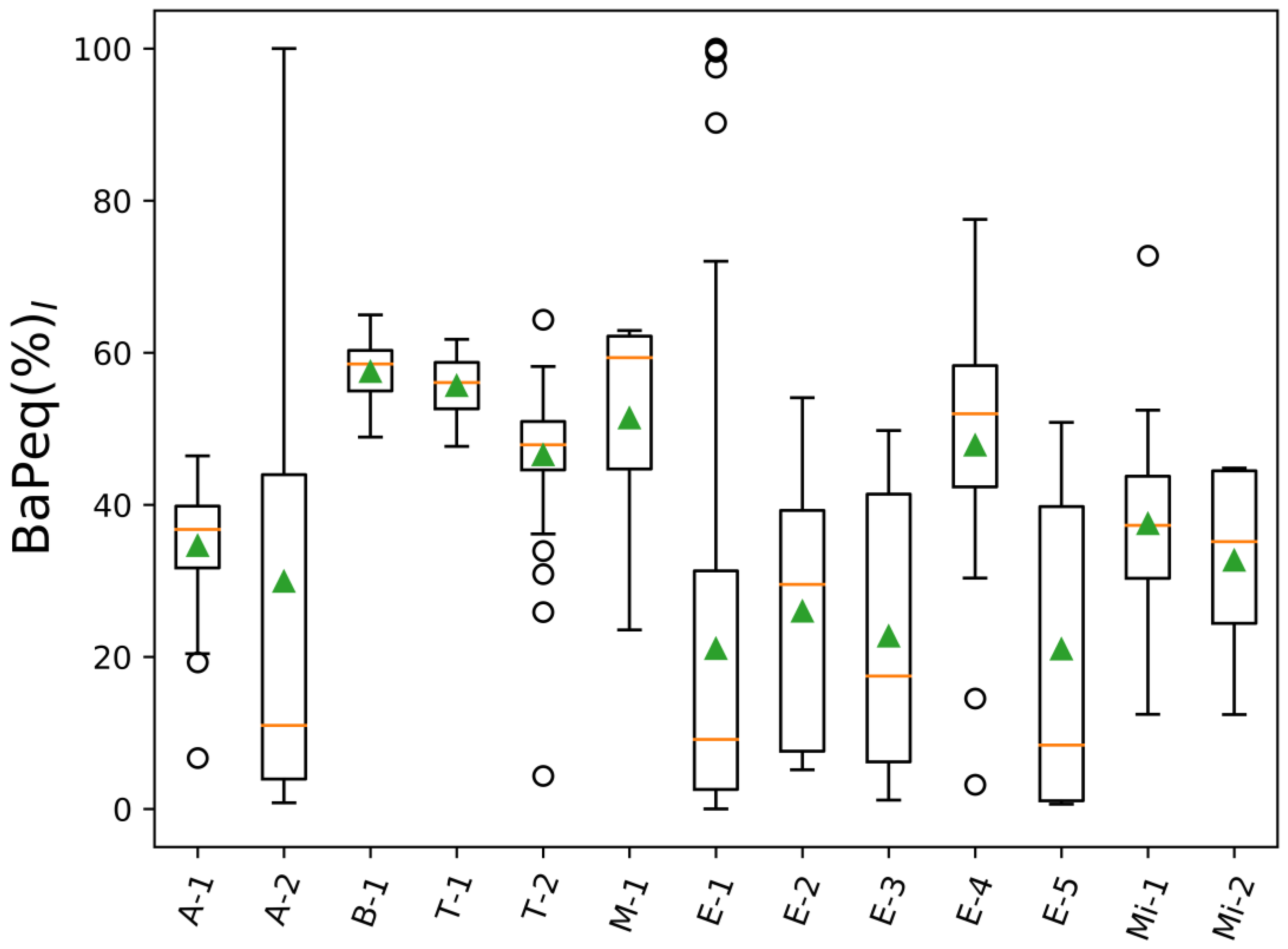 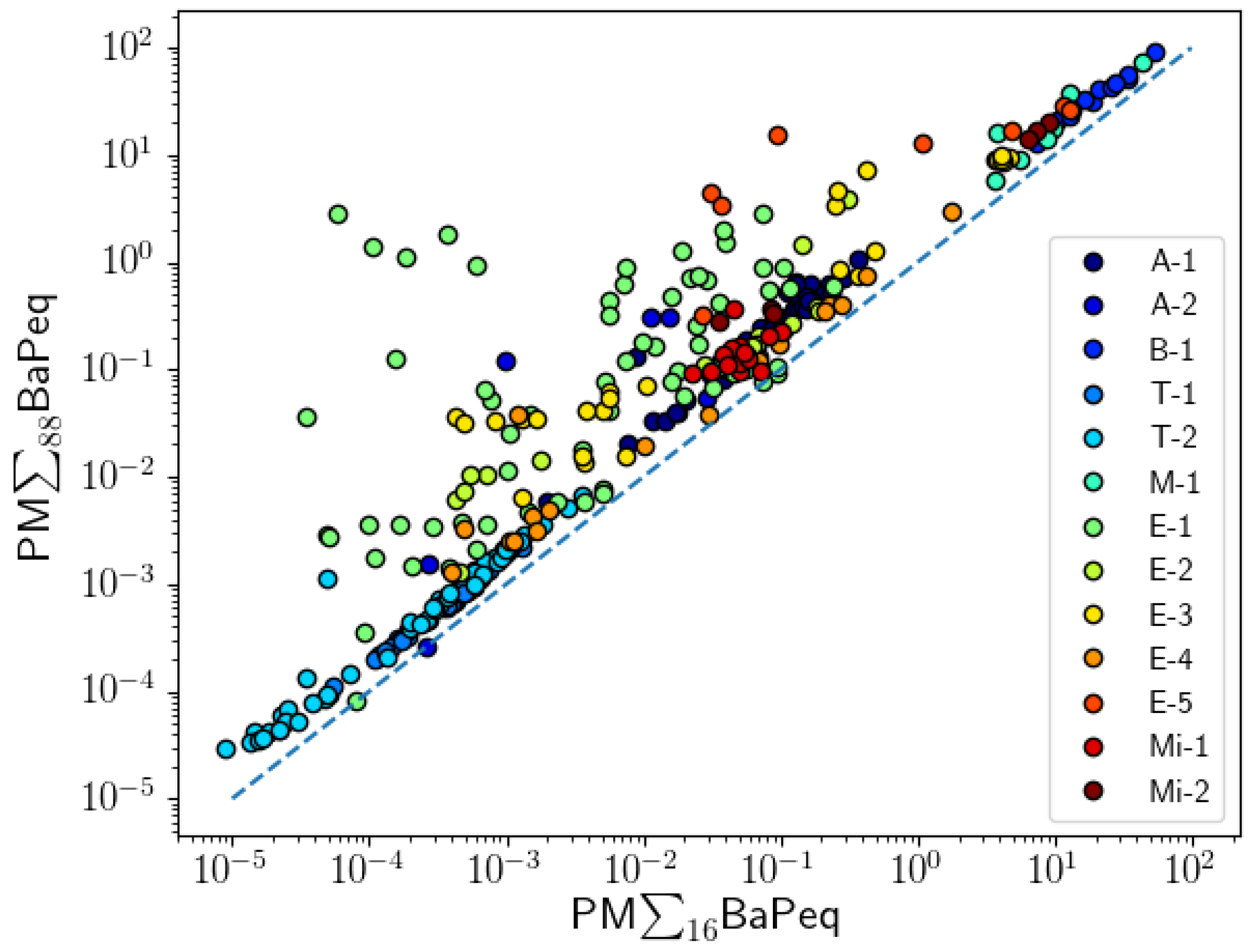 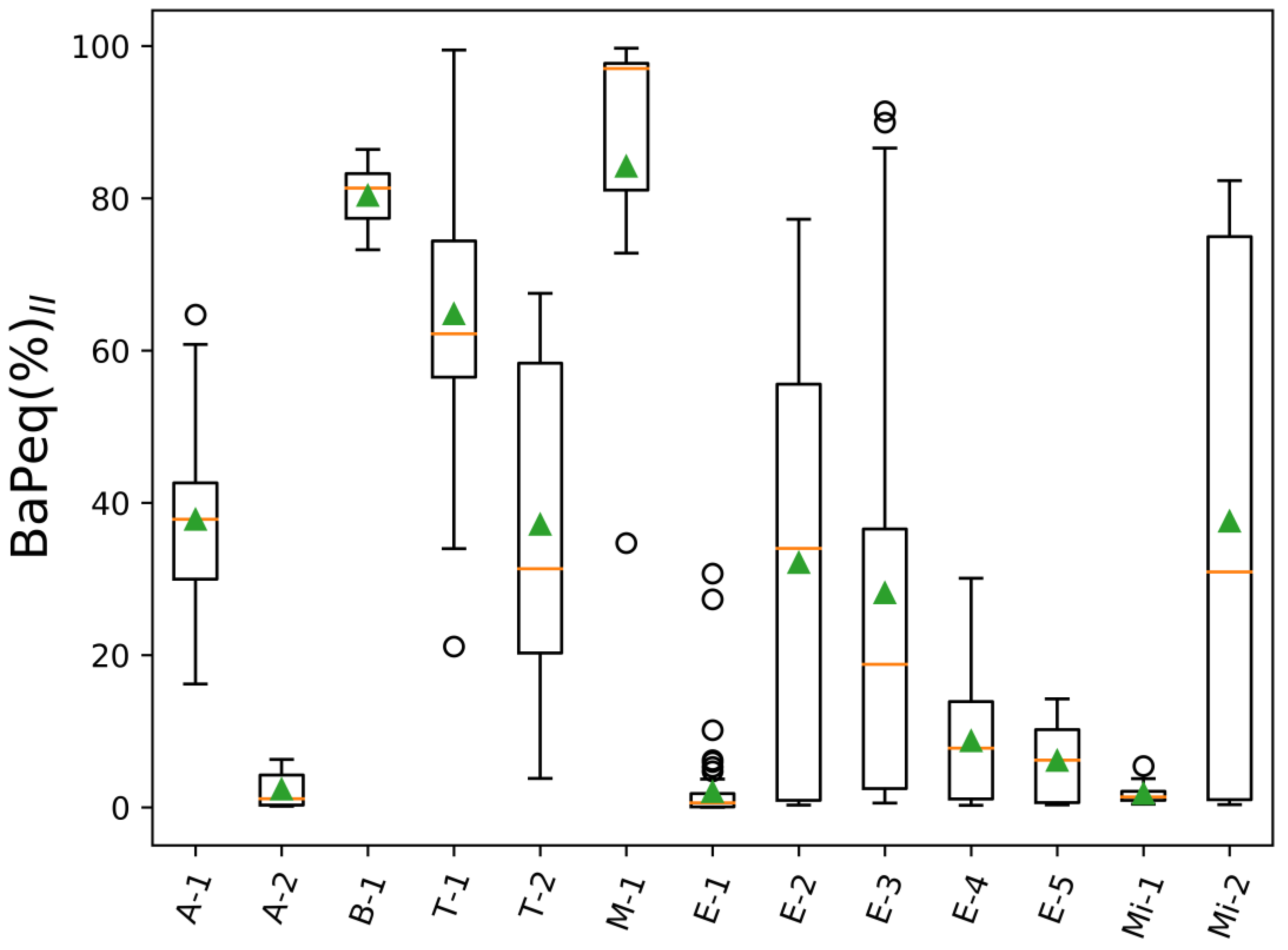