EDCs Mixtures: A Stealthy Hazard for Human Health?
Next Article in Special Issue

Impact of Spent Mushroom Substrates on the Fate of Pesticides in Soil, and Their Use for Preventing and/or Controlling Soil and Water Contamination: A Review

The quest for an effective alternative means for effluent treatment is a major concern of the modern-day scientist. Fungi have been attracting a growing interest for the biological treatment of industrial wastewater. In this study, Saccharomycescerevisiae and Torulasporadelbrueckii were isolated from spoiled watermelon and inoculated into different concentrations of effluent. The inoculants were incubated for 21-days to monitor the performance of the isolates by measurement of biochemical oxygen demand (BOD), chemical oxygen demand (COD), nitrates, conductivity, phosphates, sulphates and turbidity. The results showed that Saccharomycescerevisiae had the highest percentage decrease of 98.1%, 83.0%, 60.7%, 60.5%, and 54.2% for turbidity, sulphates, BOD, phosphates and COD, respectively, of the tannery effluent. Torulasporadelbrueckii showed the highest percentage decrease of 92.9%, 90.6%, and 61.9% for sulphates, COD, and phosphates, respectively, while the syndicate showed the highest percentage reduction of 87.4% and 70.2% for nitrate and total dissolve solid (TDS), respectively. The least percentage decrease was displayed by syndicate organisms at 51.2%, 48.1% and 40.3% for BOD, COD and conductivity, respectively. The study revealed that Saccharomycescerevisiae and Torulasporadelbrueckii could be used in the biological treatment of tannery-effluent. Hence, it was concluded that the use of these organisms could contribute to minimizing the adverse environmental risks and health-hazards associated with the disposal of untreated tannery-effluents. View Full-Text
Keywords: effluent; environmental risk; health-hazards; Saccharomyces cerevisiae; Torulaspora delbrueckii effluent; environmental risk; health-hazards; Saccharomyces cerevisiae; Torulaspora delbrueckii
►▼ Show Figures 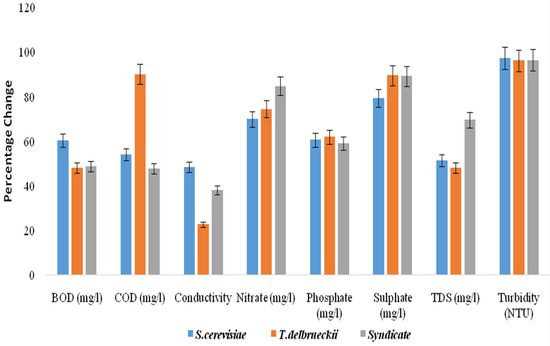