The Effects of E-Cigarette Aerosol on Oral Cavity Cells and Tissues: A Narrative Review

Isolation of DiNP-Degrading Microbes from the Mouse Colon and the Influence DiNP Exposure Has on the Microbiota, Intestinal Integrity, and Immune Status of the Colon

Di-isononyl phthalate (DiNP) is a plasticizer used to impart flexibility or stability in a variety of products including polyvinyl chloride, cable coatings, artificial leather, and footwear. Previous studies have examined the impact of DiNP on gut integrity and the colonic immune microenvironment, but this study further expands the research by examining whether DiNP exposure alters the colonic microbiota and various immune markers. Previous studies have also revealed that environmental microbes degrade various phthalates, but no studies have examined whether anaerobic gut bacteria can degrade DiNP. Thus, this study tested the hypothesis that DiNP exposure alters the gut microbiota and immune-related factors, and that anaerobic bacteria in the gut can utilize DiNP as the sole carbon source. To test this hypothesis, adult female mice were orally dosed with corn oil or various doses of DiNP for 10–14 consecutive days. After the treatment period, mice were euthanized during diestrus. Colonic contents were collected for full-length 16S rRNA gene sequencing to identify the bacteria in the colon contents. Sanger sequencing of the 16S rRNA gene was used to identify bacteria that were able to grow in Bacteroides minimal media with DiNP as the sole carbon source. Colon tissues were collected for immunohistochemistry of immune(-related) factors. An environmentally relevant dose of DiNP (200 µg/kg) significantly increased a Lachnoclostridium taxon and decreased Blautia compared to the control. Collectively, minimal changes in the colonic microbiota were observed as indicated by non-significant beta-diversities between DiNP treatments and control. Furthermore, three strains of anaerobic bacteria derived from the colon were identified to use DiNP as the sole carbon source. Interestingly, DiNP exposure did not alter protein levels of interleukin-6, tumor necrosis factor alpha, claudin-1, and mucin-1 compared to the control. Collectively, these findings show that DiNP exposure alters the gut microbiota and that the gut contains DiNP-degrading microbes. View Full-Text
Keywords: di-isononyl phthalate (DiNP); gut microbiota; immunology; tight junctions di-isononyl phthalate (DiNP); gut microbiota; immunology; tight junctions
►▼ Show Figures 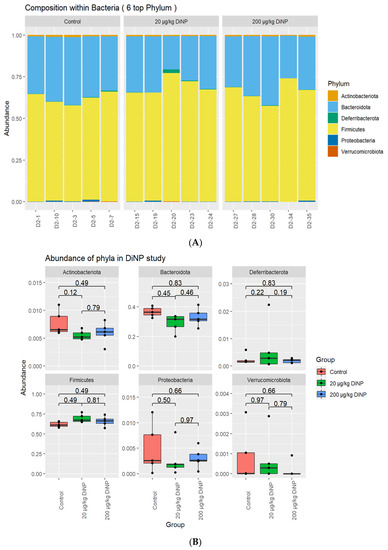