Determination of Xanthohumol in Hops, Food Supplements and Beers by HPLC
Previous Article in Journal

Acceptance of a New Food Enriched in β-Glucans among Adolescents: Effects of Food Technology Neophobia and Healthy Food Habits

Overview of Foodborne Disease Outbreaks in Brazil from 2000 to 2018

This study aimed to assess the foodborne diseases (FBD) outbreaks reported in Brazil between 2000 and 2018, based on data from the Brazilian Ministry of Health (official data) and from scientific literature. According to official data, 13,163 FBD outbreaks were reported in the country during this period, involving 247,570 cases and 195 deaths. The largest prevalence of FBD outbreaks was observed in the Southeast region of Brazil (45.6%). In most outbreaks it was not possible to determine the food implicated (45.9%) but among those identified, water was the most frequently associated (12.0%). The etiological agent was not identified in most outbreaks (38.0%), while Salmonella (14.4%) was the most frequently reported among those identified. Homes were the main site of FBD occurrence (12.5%). Regarding data obtained from the scientific literature, 57 articles dealing with FBD in the country throughout the same period were selected and analyzed. Based on these articles, mixed foods were the most prevalent in the outbreaks (31.6%), Salmonella spp. was the pathogen most frequently reported (22.8%) and homes were also the main site of FBD occurrence (45.6%). Despite under-notification, the records of FBD outbreaks that have occurred in Brazil in the past recent years show alarming data, requiring attention from health authorities. The notification of outbreaks is essential to facilitate public health actions. View Full-Text
Keywords: epidemiological survey; foodborne illnesses; food contamination; food safety; public health epidemiological survey; foodborne illnesses; food contamination; food safety; public health
►▼ Show Figures 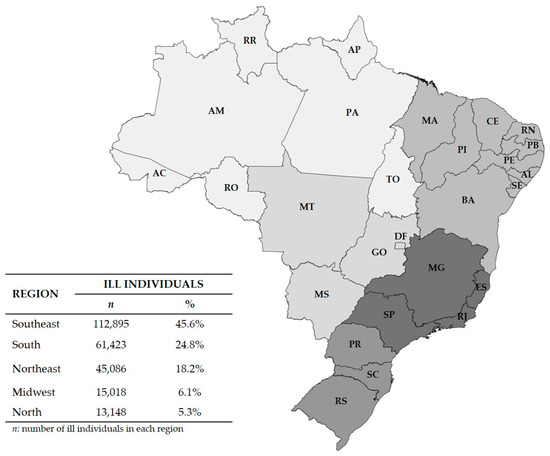