Phytochemical Properties and Nutrigenomic Implications of Yacon as a Potential Source of Prebiotic: Current Evidence and Future Directions

Terminalia ferdinandiana (Kakadu plum) is a native Australian fruit. Industrial processing of T. ferdinandiana fruits into puree generates seeds as a by-product, which are generally discarded. The aim of our present study was to process the seed to separate the kernel and determine its nutritional composition. The proximate, mineral and fatty acid compositions were analysed in this study. Kernels are composed of 35% fat, while proteins account for 32% dry weight (DW). The energy content and fiber were 2065 KJ/100 g and 21.2% DW, respectively. Furthermore, the study showed that kernels were a very rich source of minerals and trace elements, such as potassium (6693 mg/kg), calcium (5385 mg/kg), iron (61 mg/kg) and zinc (60 mg/kg) DW, and had low levels of heavy metals. The fatty acid composition of the kernels consisted of omega-6 fatty acid, linoleic acid (50.2%), monounsaturated oleic acid (29.3%) and two saturated fatty acids namely palmitic acid (12.0%) and stearic acid (7.2%). The results indicate that T. ferdinandiana kernels have the potential to be utilized as a novel protein source for dietary purposes and non-conventional supply of linoleic, palmitic and oleic acids.
Keywords: Terminalia ferdinandiana; Kakadu plum; nutrition; fatty acids; proximate; minerals; kernels Terminalia ferdinandiana; Kakadu plum; nutrition; fatty acids; proximate; minerals; kernels

Terminalia is the second-largest genus of the combretaceae family, with approximately 250 species growing in tropical and subtropical countries around the world [1]. More than 30 species of Terminalia occur in northern regions of Australia [2]. More than 50 species of Terminalia have found utility as ingredients in foods and beverages worldwide, as preservatives, raw material for wine and palm sugar, eaten raw and as food supplements [3]. The nutritional and therapeutic properties of Terminalia genus can be attributed to the presence of a wide range of phytochemicals, such as phenolic compounds, which encompasses phenolic acids, gallotannins, ellagitannins, proanthocyanidins and other flavonoids [3].
Terminalia ferdinandiana, popularly known as Kakadu plum, is native to Australia. Indigenous Australians (Aboriginal people) have been using this plant as a food and medicine for centuries, for example, refreshing drinks are made from fresh or dried fruits in Western Australia [2]. Fruits are traditionally used as an antiseptic, soothing balm, in colds and flu and in treating a headache [4]. A number of research outcomes have been reported on the antioxidant [5,6,7], antibacterial [8,9], anti-inflammatory [10], anti-apoptotic, cytoprotective and anticancer activities [11] of T. ferdinandiana fruits and leaves. Phytochemical analysis has revealed that T. ferdinandiana fruit is a rich source of Ellagic acid and its hydrolysable tannins, ellagitannins [12]. Recently, a food safe extraction method of T. ferdinandiana fruits for commercial use in the food industry has been suggested [4]. Additionally, a systematic evaluation of the changes in quality and bioactivity of the fruits of T. ferdinandiana during processing, packaging and storage has been performed, and key chemical markers have been identified to enable standardized products to be delivered to the consumer [9].
In the last two decades, seeds and kernels from the Terminalia genus have been researched and reported for their nutritional properties and health-promoting activities [13,14,15]. To understand the relationship between the internal quality and genotype of the plant, studies of nut and kernels characteristics and composition are very common. During the industrial processing of T. ferdinandiana fruits, the seeds are treated as waste products and have been discarded. Recent studies on many fruit seeds or kernels have shown that they have the potential to be utilized as ingredients for value addition, they are very nutritious and could be used as alternate sources of essential minerals, fatty acids, and proteins [16,17,18,19].
To date, no reports have been published on the utilization of the by-products of T. ferdinandiana and there is no investigation on the chemical and nutritional composition of T. ferdinandiana kernels. The aim of this study was to determine the potential use of the by-product of T. ferdinandiana in the industry by determining proximate, mineral and fatty acid compositions to ascertain its nutritional value and potential as a source of food supplement ingredients for the food industry.

Fully ripe and mature fruits of T. ferdinandiana were collected from over 600 trees, giving a total harvest of 5000 kg, from native bush land covering an area of 20,000 km2 in Northern Territory, Australia in 2015 and were authenticated by the experts in Queensland Herbarium, Brisbane Botanic Gardens Mt Coot-tha, Queensland, Australia, where botanical specimens were retained for future reference (AQ522453). Seeds were collected as the by-products after pureeing of the fruits, and were stored at −20 °C prior to analysis. T. ferdinandiana tissues are illustrated in Figure 1.

The frozen seeds were thawed, washed and cleaned manually several times to remove the pulp residues with double distilled water. The seeds were then dried in the oven for 48 h at 40 °C. After drying, the seeds were individually cracked using an Engineers’ vice size 125 (DAWN, Melbourne, Australia) to release the kernels from the seedcoats. The seedcoats and kernels were kept, processed and analyzed separately. The kernels were kept in air-tight containers and placed at −20 °C for further analysis. A flowchart depicting the processing of the seeds is illustrated in Figure 2. During the processing of fruits in the industry in a batch of 100 kg of fruits, 22 kg of seeds can be obtained as by-product. The average weight of a dry seed is 0.5 g and the moisture content is 2.8%. Average weight of a kernel is 0.04 g. The kernel is 8% of the weight of the seed. 1 kg of dry seeds can deliver 80 g of kernels.

Dried kernels (ca. 1 g) were finely chopped and extracted with chloroform and methanol (2:1) followed by agitation at room temperature for one hour. The mixture was then centrifuged for 5 min at 3500 rpm and the whole process was repeated twice. The lipid extracts were mixed with boron trifluoride (BF3)-methanol reagent (20%) and fatty acids were derivatized to fatty acid methyl esters [20]. The methyl esters of the fatty acids were dissolved in heptane and analyzed by GC-MS (Shimadzu QP2010, Shimadzu Corporation, Tokyo, Japan). The GC conditions were as follows: Restek stabilwax capillary column (30 m × 0.25 mm ID × 0.5 µm film thickness) (Restek Corporation, Bellefonte, PA, USA); oven temperature program: the column held initially at 100 °C after injection and the final temperature was increased to 250 °C, total program time was 39:00 min; injector temperature: 250 °C; carrier gas: Helium; linear gas velocity: 42.7 cm/s; column flow: 1.10 mL/min; split ratio: 50.00; injection volume: 1.0 µL. MS conditions were regulated as follows: ion source temperature: 200 °C; interface temperature: 250 °C; mass range: 35–500 atomic mass units. Identification of the compounds was carried out by comparison of their retention times and mass spectra with corresponding data from a standard food industry FAME Mix (Restek Corporation, Bellefonte, PA, USA). A total of 32 individual compounds were analyzed and only the detected ones were recorded along with their quantity compared with the standard.

Accurately weighed 0.3 g of dried T. ferdinandiana kernels were taken into teflon vessels of microwave digestion system (MarsXpress, CEM, Matthews, NC, USA) and high-purity nitric acid (70% w/w, 4 mL) was added [21]. The samples were left overnight at room temperature for slow digestion gasses to evolve. The vessels were sealed and microwave-digested at increased temperature with set digestion time [22]. The digested samples were diluted and made up to 40 mL with high-purity water (Milli-Q Element system, Millipore, Bedford, MA, USA). The levels of minerals and trace elements were analyzed by inductively coupled plasma optical emission spectrometry (ICP-OES, Vista AX, Varian Australia, Mulgrave, Victoria, Australia), to measure lower levels and for greater sensitivity the analysis was carried out using ICP-MS (7500a, Agilent, Tokyo, Japan). The ICP-MS was equipped with an auto-sampler, integrated sample introduction system and a helium octopole reaction cell to remove polyatomic interferences (40Ag 35Cl on 75As). The operating conditions were as follows: radio frequency (RF) power 1350W, argon carrier gas 0.8 L/min and helium reaction cell gas flow rate 4.5 mL/min. The standard reference materials were used for the quality control and assurance and treated similarly to the samples throughout the study. The data of quality control and assurance are presented in the Supplementary Material (Table S1).

The data were calculated using Microsoft Excel 2013 (Microsoft Corporation, Redmond, WA, USA). The results are expressed as the mean of triplicate experiments unless otherwise specified.

The macro and trace element composition of T. ferdinandiana kernels evaluated in this study is presented in Table 3, and the non-essential and heavy metal composition is presented in Table 4. Minerals are essential for proper functioning of the body, and a deviation from the appropriate amounts can cause numerous diseases, clinical syndromes, and illnesses associated with the deficient intake, as well as overuse over time or at a certain time period of life. Hence, reference values are established and reviewed periodically to stipulate the mineral levels that will meet the needs of healthy human individuals. The RDA of the evaluated minerals for a healthy male adult of 70 kg body weight are also presented in Table 3 and Table 4. The high macro-mineral contents were found to be phosphorus 872.8 mg/100 g DW, and calcium at 538.5 mg/100 g DW, while sodium was 120.3 mg/100 g DW and magnesium 421.1 mg/100 g DW (Table 3). These results indicated that the kernels could significantly contribute to the mineral intake in humans. Mineral composition analysis of kernels from Terminalia genus is scarce and one report on the mineral composition of T. catappa seeds included phosphorus (10), calcium (36.1), magnesium (26.4), iron (375), sodium (5) and potassium (350), in mg/100 g [14]. Kernels from bayberry (Myrica rubra) were reported as an abundant source of potassium, containing 780 mg/100 g [26]. The potassium content of white Chinese olive (Canarium album) is also high, at 587 mg/100 g [19]. In our study, T. ferdinandiana kernels contained 669.3 mg/100 g of potassium, which can be compared to the potassium content of bayberry, Chinese olive, and black Chinese olive. Moreover, the phosphorus levels of T. ferdinandiana kernels (872.8 mg/100 g DW) seemed to be much higher compared to the levels of bayberry (32.9 mg/100 g) [16]. Important trace elements found in T. ferdinandiana were zinc, manganese, copper and iron at levels of 6, 9.1, 2.5 and 6.1 mg/100 g, respectively, and are within the RDA and AI values. It can be suggested that T. ferdinandiana kernels can be a valuable dietary source of these trace elements. These trace elements are important constituents of various proteins and enzymes of our body which are involved in macronutrient metabolism [15]. The levels of molybdenum, arsenic, mercury, cadmium were found at less than 0.1 mg/kg in the kernels, while the lead level was found at 0.13 mg/kg (Table 4). Heavy metal exposure poses significant health risks, which can cause life-threatening diseases, and the toxic effects are influenced by chemical forms, absorption rate, and solubility in body fluids. The toxicity of arsenic depends on the chemical form. The inorganic form of arsenic is more toxic than organic arsenic [21]. Mercury can be readily absorbed and incorporated into tissue proteins and can cause detrimental effects on health. The bioaccessibility and bioavailability of the exposed heavy metals can again vary depending on the chemical forms, time and route of exposure, duration, and concentration of the exposed metals. However, the levels of heavy metals found in T. ferdinandiana kernels were within the regulatory limits, suggesting that they may not impose any health risk.

The authors declared no conflict of interests. 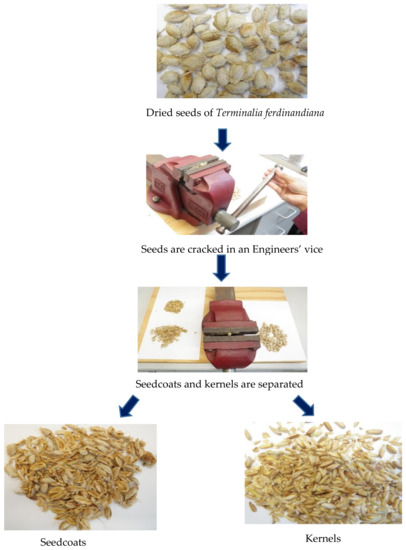