Baker’s yeast intolerance is rising among Western populations, where Saccharomyces cerevisiae is spread in fermented food and food components. Zymomonas mobilis is a bacterium commonly used in tropical areas to produce alcoholic beverages, and it has only rarely been considered for dough leavening probably because it only ferments glucose, fructose and sucrose, which are scarcely present in flour. However, through alcoholic fermentation, similarly to S. cerevisiae, it provides an equimolar mixture of ethanol and CO2 that can rise a dough. Here, we propose Z. mobilis as a new leavening agent, as an alternative to S. cerevisiae, overcoming its technological limit with different strategies: (1) adding glucose to the dough formulation; and (2) exploiting the maltose hydrolytic activity of Lactobacillus sanfranciscensis associated with Z. mobilis. CO2 production, dough volume increase, pH value, microbial counts, sugars consumption and ethanol production were monitored. Results suggest that glucose addition to the dough lets Z. mobilis efficiently leaven a dough, while glucose released by L. sanfranciscensis is not so well fermented by Z. mobilis, probably due to the strong acidification. Nevertheless, the use of Z. mobilis as a leavening agent could contribute to increasing the variety of baked goods alternative to those leavened by S. cerevisiae. View Full-Text
Keywords: Zymomonas mobilis; Lactobacillus sanfranciscensis; sourdough; dough leavening; bakery products; Saccharomyces cerevisiae; anti-S. cerevisiae antibodies Zymomonas mobilis; Lactobacillus sanfranciscensis; sourdough; dough leavening; bakery products; Saccharomyces cerevisiae; anti-S. cerevisiae antibodies
►▼ Show Figures 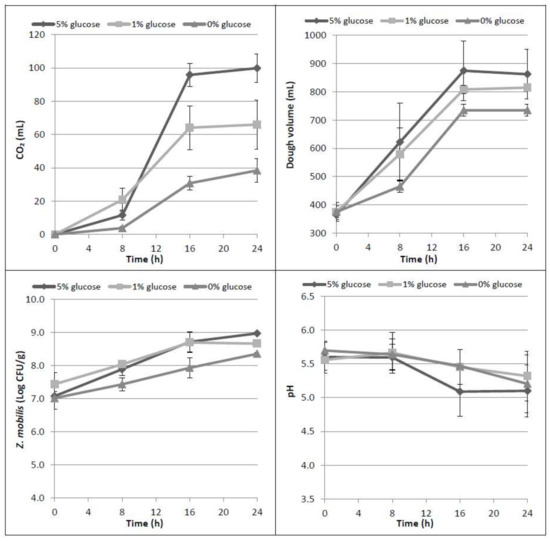