1-Phenylethyl acetate (FEMA: 2684, CAS 93-92-5) is a well-known flavor constituent admitted in many countries as a flavor ingredient. Its flavor has been described as sweet and fruity, tropical, mango, woody, musty, honey like with floral powdery nuances [1]. It is available in artificial and natural versions from various suppliers, and may also be known as styrallyl acetate or alpha methyl benzyl acetate.
According to the Volatile Compounds in Food database [2], its occurrence in food is reported in avocado [3], honey [4], melon [5] and strawberry guava [6]. Other publications state its occurrence in pineapple [7] and banana [8]. Nevertheless, none of the cited publications provides sufficient evidence for the occurrence of the title compound in food, especially when the criteria of the International Organisation of the Flavour Industry—Working Group of Methods and Analysis (IOFI WGMA) recommendation [9] are considered, which require use of an authentic standard and two independent methods of identification, e.g., mass spectrum and retention index. The occurrence of 1-phenylethyl acetate (1-PA) is mentioned in steam-distilled and expressed clove bud oil by Brian Lawrence [10] and in several Cinnamonum species [11], but no analytical details are given in those publications. This has led to remaining doubts about its occurrence in nature and some analytical service labs would regard 1-PA as not yet having been identified in nature. Consequently, flavors containing 1-PA would be regarded as not natural, regardless of whether 1-PA had been obtained from a natural source or not.
Since we had prior evidence in-house of the occurrence of 1-PA in a clove essential oil (un-published results), we re-investigated clove bud concerning the occurrence of the title compound following the recommendation in [9].

Analysis of the obtained hydrodistilled oil (Sample A) revealed Eugenol (86.3%), beta-Caryophyllene (6.3%) and Eugenyl acetate (4.1%) as the main constituents. For the identification of the 1-PA the relevant retention time window was screened for the occurrence of the most typical mass fragments m/z 104, 122 and 164. At a retention time of 31.26 min, the mass spectrum in Figure 1 (top) was obtained after background subtraction. It matched the mass spectrum of the reference (Figure 1, middle). The measured retention index was 1697 compared to 1694 of the authentic reference. Based on the FID signal integration, the area percent of 1-PA was estimated to be around 0.05%. This was a significantly higher value compared to a previous in-house analysis, where ground clove bud was extracted and 1-PA showed a concentration of 0.0027% (internal communication). Lawrence [10] reported the sum amount of 1-PA and two other co-eluting constituents in distilled clove, and in expressed oil from Madagascar at 0.1% and 0.21%, respectively, which closely matches our measured value of 0.05%.
The heating during distillation may introduce chemical changes to a product, and essential oils may contain compounds not present in the native plant. To exclude this possibility, we conducted a SPME extraction of clove bud samples A, B and C. In those three samples, we could also detect the mass spectrum of 1-PA at the correct retention index (mass spectrum of 1-PA from SPME of sample C see Figure 1, bottom). The highest intensity was found in sample C (origin Madagascar), but no quantification was conducted.
The formation pathway of 1-phenylethyl acetate is unclear; there could be an enzymatic or chemical process. The enzymatic processes of biosynthesis often lead to products with an enantiomeric excess of one stereo isomer. To elucidate this, we conducted a chiral analysis of the 1-phenylethyl acetate. Peak identification was based on mass spectrometry and comparison to a sample of 1-PA racemate. In the essential oil obtained from clove buds, we found a significant enantiomeric excess of 62% for the first eluting enantiomer. Lacking enantiomeric pure 1-PA as reference for either of the two 1-PA enantiomers, we could not assign the configuration (R or S) of the major isomer.

1-Phenyethyl acetate was unequivocally identified in clove bud essential oil and in ground clove buds. In lab-distilled essential oil obtained from clove buds, we found an enantiomeric excess of 62% of the first eluting enantiomer. On the basis of these observations, we conclude that 1-phenylethyl acetate occurs naturally in clove buds and is probably the product of enzymatic biosynthesis, and not an artifact of subsequent processing. 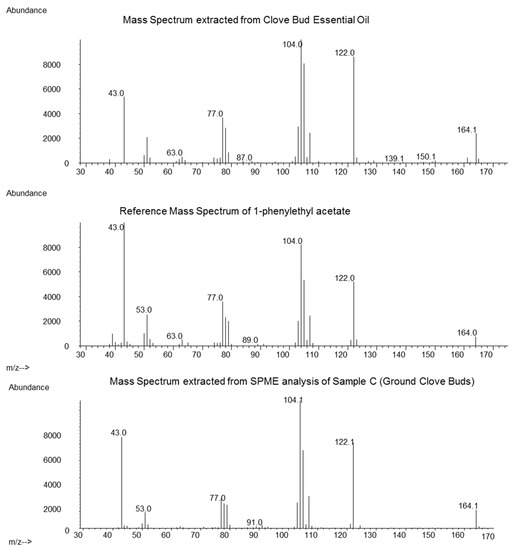 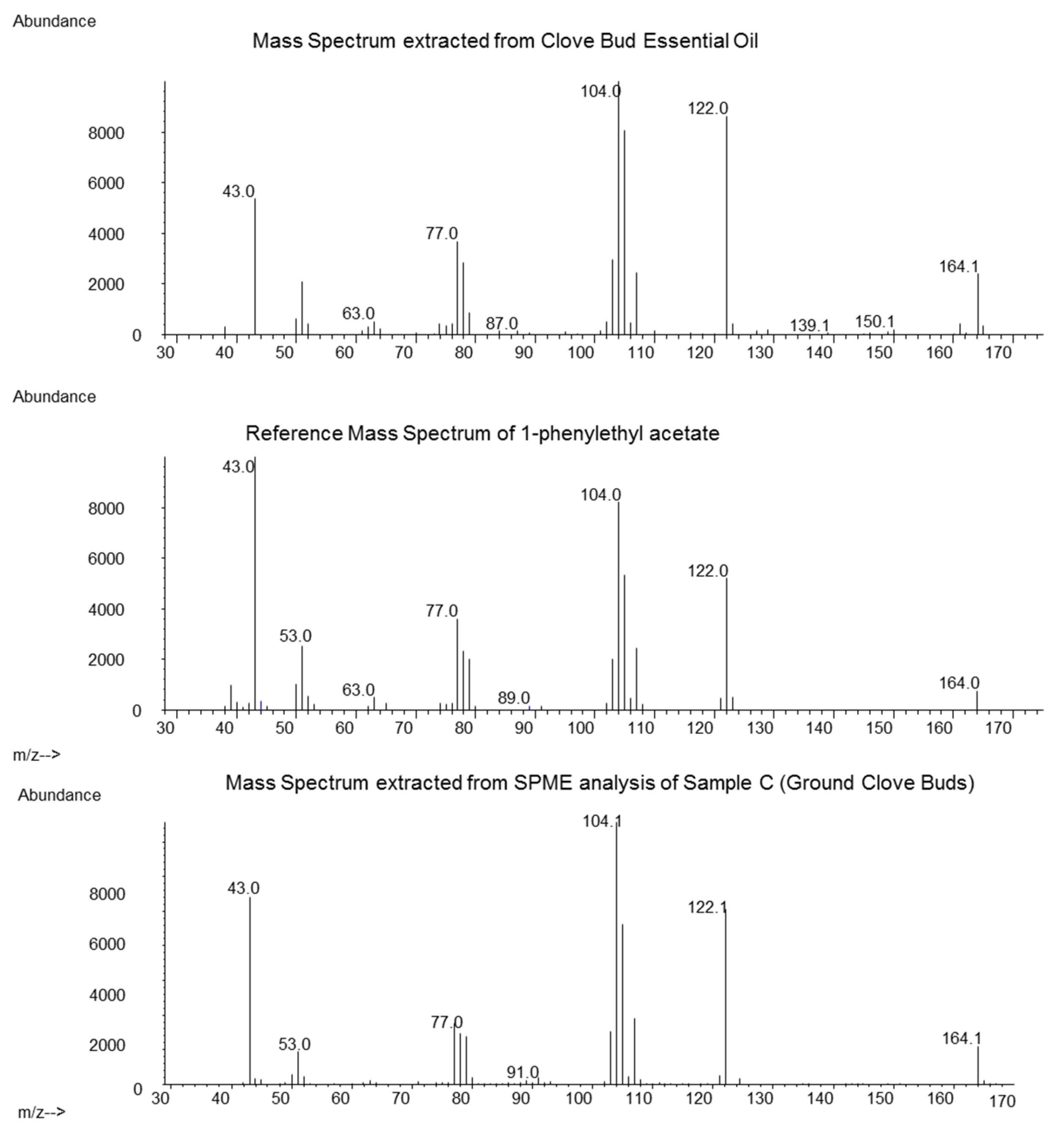