Removal of Ochratoxin A from Grape Juice by Clarification: A Response Surface Methodology Study

Ulcerative colitis (UC) is a chronic inflammatory bowel disease. The purpose of this study was to investigate the ameliorating effects of three yeast strains, Saccharomyces cerevisiae I4, Clavispora lusitaniae 30 and Pichia kudriavzevii 11, isolated from traditional fermented dairy food in Xinjiang, China, on the ulcerative colitis symptoms of Balb/c mice treated by dextran sulfate sodium (DSS). Among which, S. cerevisiae I4 had good tolerance to simulated gastrointestinal juice and strong adhesion to HT–29 cells monolayers. Furthermore, the three yeast strains were oral administered to Balb/c mice with DSS induced colitis. The weight loss, colon shortening and histological injury of colitis mice were ameliorated. Then, oral administration of S. cerevisiae I4 improved the immune state by reducing the contents of TNF–α, IL–6 and IL–1β and increasing immunoglobulin. The relative expression of intestinal barrier proteins Claudin–1, Occludin and Zonula Occludins–1 (ZO–1) of the mice enhanced, and the short chain fatty acids (SCFAs) content such as Propionic acid, Butyric acid, Isobutyric acid and Isovaleric acid in the feces of the mice increased to varying degrees, after S. cerevisiae I4 treatment compared with the model group of drinking 3% DSS water without yeast treatment. Moreover, S. cerevisiae I4 treatment lifted the proportion of beneficial bacteria such as Muribaculaceae, Lactobacillaceae and Rikenellaceae in the intestinal tract of the mice, the abundance of harmful bacteria such as Staphylococcus aureus and Turicibacter was decreased. These results suggested that S. cerevisiae I4 could alleviate DSS induced colitis in mice by enhancing intestinal barrier function and regulating intestinal flora balance. View Full-Text
Keywords: Saccharomyces cerevisiae I4; probiotic; intestinal flora; intestinal barrier; SCFAS Saccharomyces cerevisiae I4; probiotic; intestinal flora; intestinal barrier; SCFAS
►▼ Show Figures 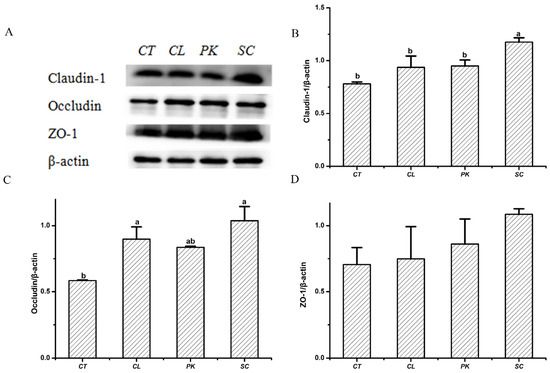