This study investigated the softening and erosive effects of various paediatric over-the-counter (OTC) oral liquids on deciduous teeth. Twenty sectioned and polished deciduous enamel blocks were ground on the buccal surface (2 × 2 mm2) and randomly divided into five groups, immersed into four commercially-available paediatric OTC oral liquids (two for paracetamol, both sugared; and two for chlorpheniramine, one sugared and one sugar-free), with deionized water as control. The pH of the oral liquids ranged from 2.50 to 5.77. Each block was immersed into the test or control groups for 15 s, rinsed with deionized water, and Vickers micro-hardness (n = 5) was measured. After twenty cycles of immersion and hardness measurements, Scanning Electron Microscope (SEM) and Energy Dispersive X-ray Spectrometry (EDS) were used to evaluate the surface morphology and chemistry of the tooth blocks, respectively. The pH values of the liquids were also recorded. Rapidly descending trends in the micro-hardness ratios of the four test groups were observed that were statistically different from the control group (p < 0.001). EDS showed an increase of Ca/C ratio after drug immersion, whereas SEM showed an enamel loss in all the test groups. Paediatric OTC oral liquids could significantly soften the enamel and render them more susceptible to caries, such that the formulation of the oral liquids is the major factor.
Keywords: OTC drugs; paediatrics; enamel; hardness; pH; oral liquids OTC drugs; paediatrics; enamel; hardness; pH; oral liquids

Table 1 shows the pH value of the test groups. The pH values ranged from 2.50 (group GC) to 7.17 (group GE) with similar endogenous pH among paracetamol groups and only one medication that was slightly higher than 5.5 (group GD). These measurements indicate that all the tested paediatric OTC medications exhibited an acidic pH.

The mean micro-hardness ratios (MHR) in each group, as a function of testing round k, are shown in Figure 1. In general, the MHR decreased with the number of drug immersion in all experimental groups despite variations in the magnitude. In the control group, only a small fluctuation (<6%) on MHR was observed after 20 rounds of immersion. However, there were drastic decreases of around 15% in the MHR in both the GC and GD groups, whilst the GB group only exhibited a 7% decrease in MHR. One-way ANCOVA revealed that test groups collectively have statistically significant differences from one another (Table 2), and the control group has a statistically significantly different regression slope from all others (p < 0.001), whilst GA, GC and GD has no statistical significant difference between each other (p > 0.05) (Table 3).

The median values for the three repeated EDS measurements in each sample before and after the experiment were calculated and analysed in the Kruskal–Wallis test (Table 4). Generally, the Ca/C ratio decreased after the drug immersion, while the Ca/P ratio and Mg, Na weight percentages mostly remained stable. However, no statistically significant differences have been found. Moreover, the data revealed that, before the immersion, all enamel surfaces appeared to be flat (Figure 2). After the twenty rounds of immersion, the surfaces of the GA group displayed a distinctive enamel loss with irregular craters. The surfaces of the GB group showed a corroded surface and the fracture lines were along the border of prism heads. In group GC, the surfaces presented a remarkable acid-etched prism-sheath structure of enamel, with the prisms surrounded by a wide sheath region. Group GD also exhibited disorganised enamel loss with increased porosity on the surface. No distinctive microstructure loss was observed in control group (group GE).

This study was approved by the Institutional Review Board of Hong Kong (IRB UW15-172). The procedure has been illustrated as a flowchart in Figure 3.

Twenty sectioned enamel blocks, with 2 × 2 mm2 buccal enamel surface, were obtained from ten sound extracted primary incisors. The incisors were stored in distilled water at 4 °C prior to use for no longer than one week. Each incisor was sliced longitudinally parallel to its long axis to get two enamel blocks by a cutting machine under running water. All enamel blocks were embedded in light-cured resin (Filtek Z250, 3M ESPE) onto an acrylic plate. The buccal surfaces were faced upwards to make sure most regions of the surface are parallel to the plate.
After embedding the enamel into the resin, the buccal surfaces of the enamel were polished using 1000- and 2000-grit SiC abrasive paper by a manually water-cooled low-speed polishing machine to obtain a flat surface without dentine exposure, and the specimen underwent ultrasonic washing in deionised water before and after polishing. Then, the twenty blocks were randomly divided into five groups (four experimental groups GA, GB, GC, GD, and one control group GE; see Table 1), i.e., four blocks in one group, to immerse into the oral liquids or deionised water.

As the most commonly used paediatric OTC drugs to relieve respiratory symptoms were usually for acute occasions [9], two commonly-used single component formulations, i.e., paracetamol and chlorpheniramine, were used (Table 1). Paracetamol (in US: acetaminophen) is a major ingredient in numerous cold and flu remedies and it is also classified as a mild analgesic to relieve headaches, fever and other minor aches and pains. Chlorpheniramine is an antihistamine used to relieve the symptoms of allergic conditions and the common cold, such as rhinorrhoea. Two different brands of paediatric OTC oral liquids containing one of each of the drugs were selected to make a comparison. In the chlorpheniramine group, the Jean-Marie brand contains sugar, while the Allerief belongs to a sugar-free type. All of the OTC drugs were purchased from local pharmacies and no further information from manufacturers was acquired.

The endogenous pH of the testing medications was determined at room temperature by using a digital pH meter (CyberScan pH500, Eutech Instruments, UK) in triplicate to get a mean value. The pH meter was calibrated before measurement according to the manufacturer’s instructions, using buffer standards of pH 4 and pH 7. Then, 10 mL of the testing medicine was placed in one beaker, the probe of the pH meter was immersed directly into the syrup and the value was recorded with the precision of 0.01.

To evaluate and compare the erosive potentials of four medications on a continuous scale, each specimen was subjected to twenty rounds of immersion in one of the drugs, followed by micro-hardness measurements. To set a baseline of the mean initial micro-hardness (MH0), each enamel block was immersed into deionised water (DI) for 15 s, and then five random spots were picked and tested using a micro-hardness tester (Leica DC 300, Leitz, Germany) with a Vickers tip and load of 200 g (1.962 N) lasting for 15 s. Then, in each round k, the enamel block was immersed into 10 mL of the corresponding test group for 15 s and followed by rinsing with DI water for 15 s. Again, the average micro-hardness values (MHk) of the enamel surfaces were measured immediately from five random spots using the same micro-hardness tester and parameters. The same immersion and measuring procedures were repeated for twenty rounds (i.e., k = 1–20). Fresh drug or DI water was used for each new round of immersion. As a whole, each sample experienced 21 (one initial + twenty after drug immersion) micro-hardness measurements. All the values were then plotted as the ratio (MHR) vs. round of immersion to give a trend (Figure 1) on how the surface hardness changes following a continuous drug attack, i.e.,:
MHR = MHk/MH0
where MHk is the mean micro-hardness at k = 0–20 rounds, and MH0 is the mean initial micro-hardness. The MHR and slope of regression lines of Figure 1 was statistically analysed by one-way ANCOVA at α = 0.05 (SPSS v.22, IBM, New York, NY, USA).

The surface topography of the enamel specimens at 1200× magnification was studied under a scanning electron microscope (Hitachi SU-1510 Variable Pressure SEM, Hitachi Ltd., Tokyo, Japan) at 15 kV in high-vacuum mode. The SEM micrographs of all enamel blocks were taken on two occasions: (1) before the immersion procedures, where the enamel blocks were mounted onto an aluminium stub separately to assess their surface topography without coating, and (2) after 20 rounds of immersion, where all the specimens were sputter-coated with carbon at 15 kV and the entire buccal surface was scanned. The SEM micrographs provided visual and illustrative comparisons of the surface morphologic changes of specimens before and after the drug/water challenge.

The same samples that had been observed in SEM were also used for the EDS analysis on the same occasions, except the EDS was done prior to the coating. The EDS system comprised of an X-ray detector system (Model 550i, IXRF-Systems, Austin, TX, USA) attached to the SEM operated at 15 kV with a spot size of 5 nm, specimen tilt of 35°, working distance of 15 mm and a counting time of 20 s. Three counts from each enamel sample were measured to give a mean weight percentage of calcium (Ca), phosphorus (P), sodium (Na), magnesium (Mg), carbon (C) and oxygen (O). The mean wt % ratios of Ca/P and Ca/C, and the wt % of Mg and Na before and after tests were statistically evaluated by Kruskal–Wallis test at α = 0.05 (SPSS v.22).

Within the limitations of this laboratory study, the four tested paediatric OTC oral liquids were found to significantly soften enamel of primary teeth and deem them susceptible to caries. There is a possible association between drug formulations and their erosive potentials.

The authors deny any conflicts of interest related to this study. This work was done in partial fulfilment of the requirements of the degree of MSc (DMS) for the first author at the Faculty of Dentistry, The University of Hong Kong. We thank Madeline J.Y. Yon for proofreading the article. 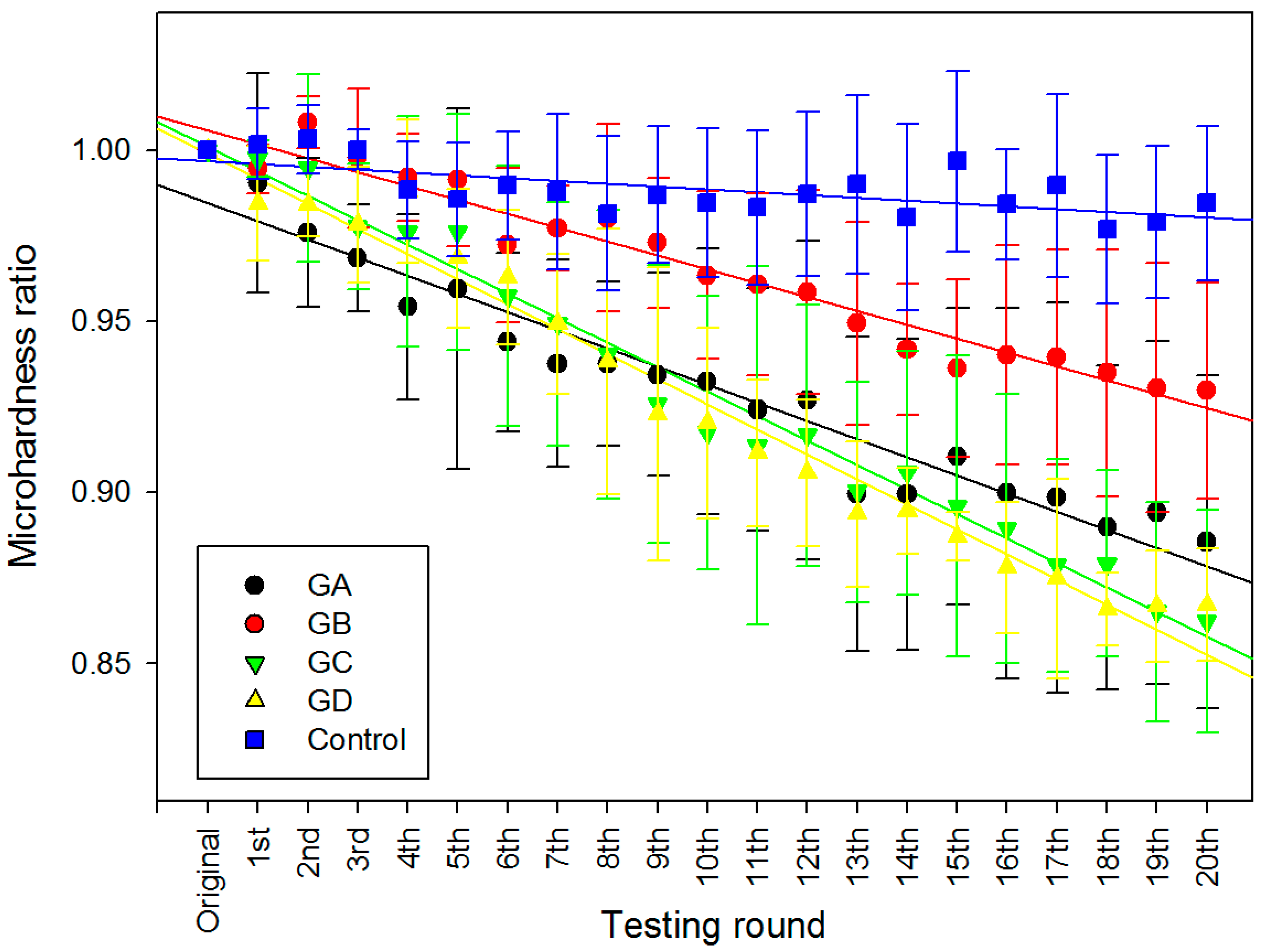 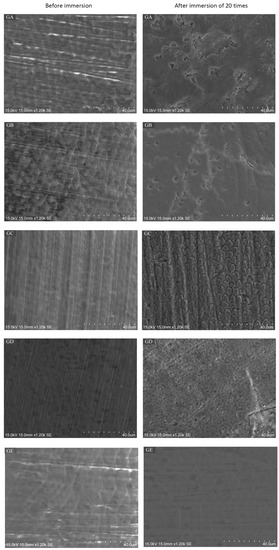 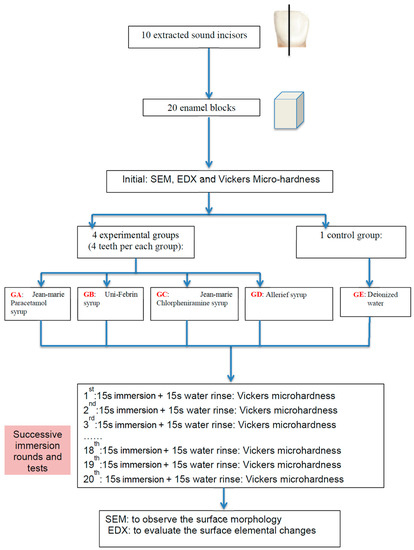