This study investigated the softening and erosive effects of various paediatric over-the-counter (OTC) oral liquids on deciduous teeth. Twenty sectioned and polished deciduous enamel blocks were ground on the buccal surface (2 × 2 mm2) and randomly divided into five groups, immersed into four commercially-available paediatric OTC oral liquids (two for paracetamol, both sugared; and two for chlorpheniramine, one sugared and one sugar-free), with deionized water as control. The pH of the oral liquids ranged from 2.50 to 5.77. Each block was immersed into the test or control groups for 15 s, rinsed with deionized water, and Vickers micro-hardness (n = 5) was measured. After twenty cycles of immersion and hardness measurements, Scanning Electron Microscope (SEM) and Energy Dispersive X-ray Spectrometry (EDS) were used to evaluate the surface morphology and chemistry of the tooth blocks, respectively. The pH values of the liquids were also recorded. Rapidly descending trends in the micro-hardness ratios of the four test groups were observed that were statistically different from the control group (p < 0.001). EDS showed an increase of Ca/C ratio after drug immersion, whereas SEM showed an enamel loss in all the test groups. Paediatric OTC oral liquids could significantly soften the enamel and render them more susceptible to caries, such that the formulation of the oral liquids is the major factor. View Full-Text
Keywords: OTC drugs; paediatrics; enamel; hardness; pH; oral liquids OTC drugs; paediatrics; enamel; hardness; pH; oral liquids
►▼ Show Figures 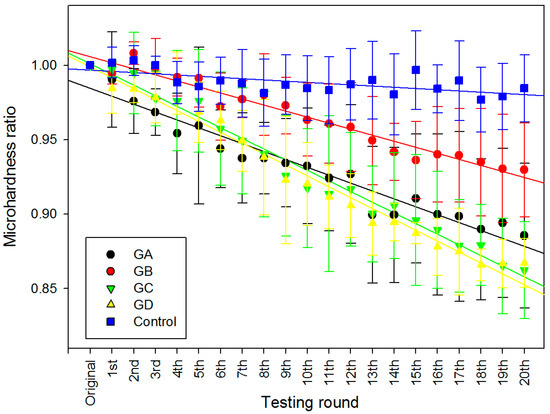