2.58 kW Narrow Linewidth Fiber Laser Based on a Compact Structure with a Chirped and Tilted Fiber Bragg Grating for Raman Suppression
Next Article in Special Issue

Here, the experimental and numerical results provide evidence of strong coupling between an Au layer and an azo-dye. Strong coupling between the Au and a dye is not easy to observe, so a deep analysis for understanding the physics of the system is carried on. After an accurate analysis of the reflectivity of the plain Au layer as well as after the chromophore adsorption, a hypothesis of strong coupling was advanced. The reflectivity dispersion of system polariton-exciton is characterized by an anti-crossing and two polaritons with a distance that raises with the concentration of the molecules until reaching a condition of saturation, as proof of a non-weak coupling. However, from one side the low-quality factor Q, from the other the optical characteristics of the dye, the strong coupling seems to contradict the achieved results. Then, a possible explanation of these results is that the collective vibrational level structure of the molecules plays a crucial role, and despite the poor conditions of coupling, the matching between the phonons and the excitons reaches an outstanding strength. The emission spectra permitted to characterize the vibrational status of the molecules coupled to the polaritons. Due to the dye adsorption, the surface plasmon frequency shifts, and the Stokes peak splits into two peaks, having a distance bigger than their line width. The strong effect of the collective mechanism of the molecules was described by a hybrid model. Finally, after proving and characterizing the strong coupling, the Raman scattering from such hybridized light-matter states was studied. The coherent nature of the vibro-polariton states increases the Raman scattering cross-section and indicates an enhancement mechanism due to the intrinsic properties of the molecules (e.g., polarizability). Since the light-matter interaction permits the property modulation of materials by confining to small volumes the light field for forming exciton-polariton states, these results provide insight into molecular science. View Full-Text
Keywords: SPP/exciton coupling; strong coupling; dispersion; collective Rabi splitting; Stokes emission SPP/exciton coupling; strong coupling; dispersion; collective Rabi splitting; Stokes emission
►▼ Show Figures 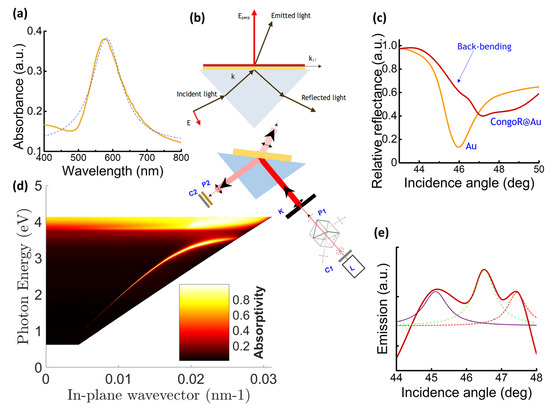