Microalgae are an ideal source for next-generation biofuels due to their high photosynthetic rate. However, a key process limitation in microalgal biofuel production is harvesting of biomass and extraction of lipids in a cost-effective manner. The harvesting of the algal biomass amounts to approximately 20 to 30% of the total cost of the cultivation; hence, developing an efficient and universal harvesting method will make the commercialization of microalgal bio-cultures sustainable. In this study, we developed, demonstrated, and evaluated a novel harvesting method based on Glass Reinforced Fiber Polymer (GFRP) panels, suitable for industrial-scale installations. The proposed method was based on previous observations of preferential micro-algae development on glass surfaces, as well as in the assumption that the microalgae cells would prefer to attach to and grow on substrates with a similar size as them. At first, we developed a laser micromachining protocol for removing the resin and revealing the glass fibers of the GFRP, available for algal adhesion, thus acting as a microalgae biomass harvesting center. Surface micromachining was realized using a ns pulsed ultraviolet laser emitting at 355 nm. This laser ensured high machining quality of the GFRP, because of its selective material ablation, precise energy deposition, and narrow heat affected zone. A specially built open pond system was used for the cultivation of the microalgae species Scenedesmus rubescens, which was suitable for biofuel production. The cultivation was used for the experimental evaluation of the proposed harvesting method. The cultivation duration was set to 16 days in order for the culture to operate at the exponential growth phase. The biomass maximum recovery due to microalgae attachment on the GFRP surface was 13.54 g/m2, a yield comparable to other studies in the literature. Furthermore, the GFRP surfaces could be upscaled to industrial dimensions and positioned in any geometry dictated by the photobioreactor design. In this study, the glass fiber reinforced polymer used was suitable for the adhesion of Scenedesmus rubescens due to its fiber thickness. Other microalgae species could be cultivated, adhere, and harvested using GFRP of different fiber sizes and/or with a modified laser treatment. These very encouraging results validated GFRPs’ harvesting capabilities as an attachment substrate for microalgae. Additional studies with more algae species will further strengthen the method. View Full-Text
Keywords: microalgae; harvesting; biofilm; GFRP; UV ns laser microalgae; harvesting; biofilm; GFRP; UV ns laser
►▼ Show Figures 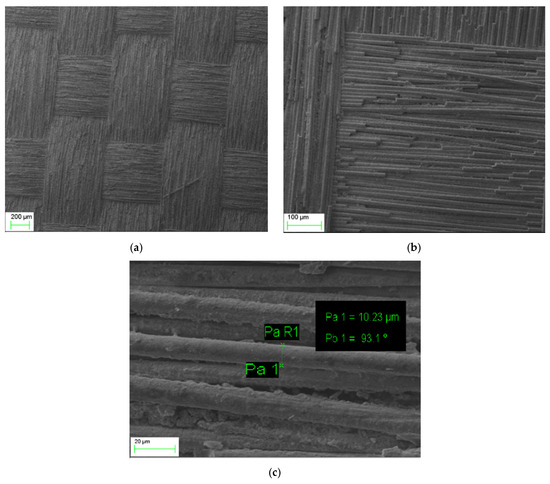