Optical Kerr effect (OKE) is a third-order nonlinear phenomenon which refers to a change in the refractive index induced by an applied electric field through a nonlinear polarization [1,2,3,4,5]. In optical fibers, it has already been applied to controlling the phase shift and the dispersion [6,7,8]. However, because the nonlinear refractive index coefficient of the silica material (2.6 × 10−20 m2/W) is small, OKE is usually neglected in traditional optical fibers [9]. Recently, tellurite glass has attracted great attention and optical fibers fabricated based on it have been used for nonlinear optics, optical fiber lasers and amplifiers, and optical communication [10,11,12,13,14]. This novel fiber material has many excellent features such as good thermal stability, chemical durability, and wide transmission range in the mid-infrared region [15,16,17,18]. Particularly, its refractive index coefficient (5.9 × 10−19 m2/W) is more than one order of magnitude larger than that of silica [19], which is highly advantageous for obtaining significant OKE.
All-solid photonic bandgap fibers (PBGFs), which are composed of high-index rods periodically embedded in a low index cladding, can give rise to a forbidden frequency band for light propagation [17,20,21,22], and have already been applied to tunable bandpass filters and nonlinear optical devices [23,24,25,26]. Managing to combine tellurite’s material advantage and PBGF’s structural features together, our group has successfully produced all-solid tellurite PBGFs and further explored in detail their fabrication procedure, transmission characteristics, and photonic bandgap (PBG) property [27,28]. In these novel fibers, OKE will become significant when pulses of high intensity transmit in the fiber core, which may possibly induce novel optical phenomena.
In this paper, we demonstrate the ultrafast all-optical signal modulation induced by OKE in an all-solid tellurite PBGF. The fiber was specifically designed, which had a double-cladding structure and possessed thermal compatibility among high-index rods, the background, and the cladding. The signal transmitting in the fiber core can be ultrafast all-optically modulated by the ultrafast single pulse under OKE, and an all-optical switch system can be developed.

OKE refers to the phenomenon that the refractive index (n) of the fiber core depends on the intensity of the control pulse transmitting in it, which can be given by n = n0 + n2Iin. n0 is the linear refractive index of the core material, n2 is the nonlinear refractive index, and Iin is the intensity of the control pulse. Figure 1a shows the circumstance of a control pulse with intensity Iin transmitting in the core of an all-solid PBGF, in which the refractive index of the background and the high-index rods is n0 and n1, respectively. Although the control pulse intensity is in Gauss distribution, to facilitate the calculation, we suppose the control pulse is in Square distribution, thus the refractive index of the fiber core is n0 + n2Iin.
For an all-solid PBGF fabricated using the traditional fiber material (silica), the nonlinear refractive index coefficient n2 is small. As a result, n2Iin is negligible in spite of the increase of the control pulse intensity. However, for an all-solid PBGF fabricated using tellurite glasses, n2 is much larger, thus with the increase of Iin, n0 + n2Iin will grow significantly, which will lead to changes in the transmission property. When Iin reaches a certain value, n0 + n2Iin may even exceed the effective refractive index of the cladding, and at this point the light guiding mechanism in the fiber will shift from PBG to the total internal reflection.
Figure 1b,c is a principle schematic diagram of the all-optical signal modulation induced by OKE based on the PBG map of an all-solid tellurite PBGF whose parameters were selected appropriately. In Figure 1b we can see several BPG regions appear from 1.0 μm to 2.0 μm. When the control pulse with intensity Iin transmits in the fiber core, the mode’s effective refractive index neff will increase due to OKE and the neff line will move upward. Consequently, the transmission bands will blue-shift, which is shown in detail in Figure 1c. The wavelength shift of the high frequency edge is tagged as ∆λ. If the fiber core transmits a signal whose wavelength locates in the transmission band before the blue-shift and falls outside after the blue-shift, this signal will be “switched on” or “switched off” by the control pulse. This is the all-optical signal modulation we attempt to demonstrate in this paper.
Generally speaking, with the same fiber parameters, the double-clad structure has stronger ability in light confinement than the single-clad structure. Therefore, the all-solid double-clad tellurite PBGF was designed and fabricated to carry out the relevant analysis and experiment. It was fabricated by the stack-and-draw technique based on 65TeO2-8Li2O-17WO3-3MoO3-7Nb2O5 (TLWMN, high-index rods), 70TeO2-15ZnO-5Na2O-10La2O3 (TZNL, background) and 17TeO2-16ZnO-15Li2O-10K2O-2Al2O3-40P2O5 (TZLKAP, cladding) glasses [27,28]. Table 1 shows the linear reflective indices (n0) and softening temperatures of the three glasses (T0), which were measured by the prisms method and a thermal expansion analyzer (TMA8310), respectively. The softening temperatures were similar but the linear reflective indices were different. The transmission spectrum was measured as shown in Figure 2. All three glasses exhibited excellent transmission property in the mid-infrared region.
The fabrication process is specified in Figure 3. One TLWMN and one TZNL rod with a diameter of 12 mm were prepared by the casting method. One TZNL and one TZLKAP tube with a diameter of 12 mm were prepared by the rotational casting method. Step 1, the TLWMN and TZNL rods were respectively elongated to get a TLWMN capillary with a diameter of ~7.2 mm and a TZNL capillary with a diameter of ~1.0 mm. Step 2, the TLWMN capillary was inserted into the TZNL tube and together elongated to produce a capillary with a diameter of ~1 mm. The cross section of the produced capillary was shown in the inset of Figure 3b. Step 3, the capillary obtained in Step 2 was cut into pieces of 20 cm, 36 of which were stacked into the TZLKAP tube with the arrangement of three rings around a central TZNL capillary to produce the preform. Finally, the preform was drawn into the all-solid double-clad tellurite PBGF with d = ~5.4 μm and Λ = ~9.0 μm. The insets of Figure 3c are photos of the preform (the upper one) and the successfully fabricated fiber (the lower one). During the fabrication process, a negative pressure of nitrogen gas was used to avoid the interstitial hole formation in the core-cladding interface. The PBG map of the all-solid double-clad tellurite PBGF with d = ~5.4 μm and Λ = ~9.0 μm was calculated by the commercial software based on the plane wave expansion method (PWM) which was formed by the mode coupling of the isolated high-index rod. The BPG map of the designed all-solid double-clad tellurite PBGF is shown in Figure 4.

In summary, to obtain significant OKE, an all-solid double-clad tellurite PBGF was designed and fabricated. A signal of 1.57 μm and a control beam of 200 kW were used to investigate the ultrafast all-optical signal modulation in a 10 cm all-solid double-clad tellurite PBGF. When the ultrafast single pulse passed through the fiber core, OKE induced an obvious shift in the transmission bands, removing the signal outside the PBG region. The modulation speed can reach 50 GHz, faster than some commercial LiNbO3 modulators, which can be applied to multi-monitors, local area network, detectors, multi-sources, etc. 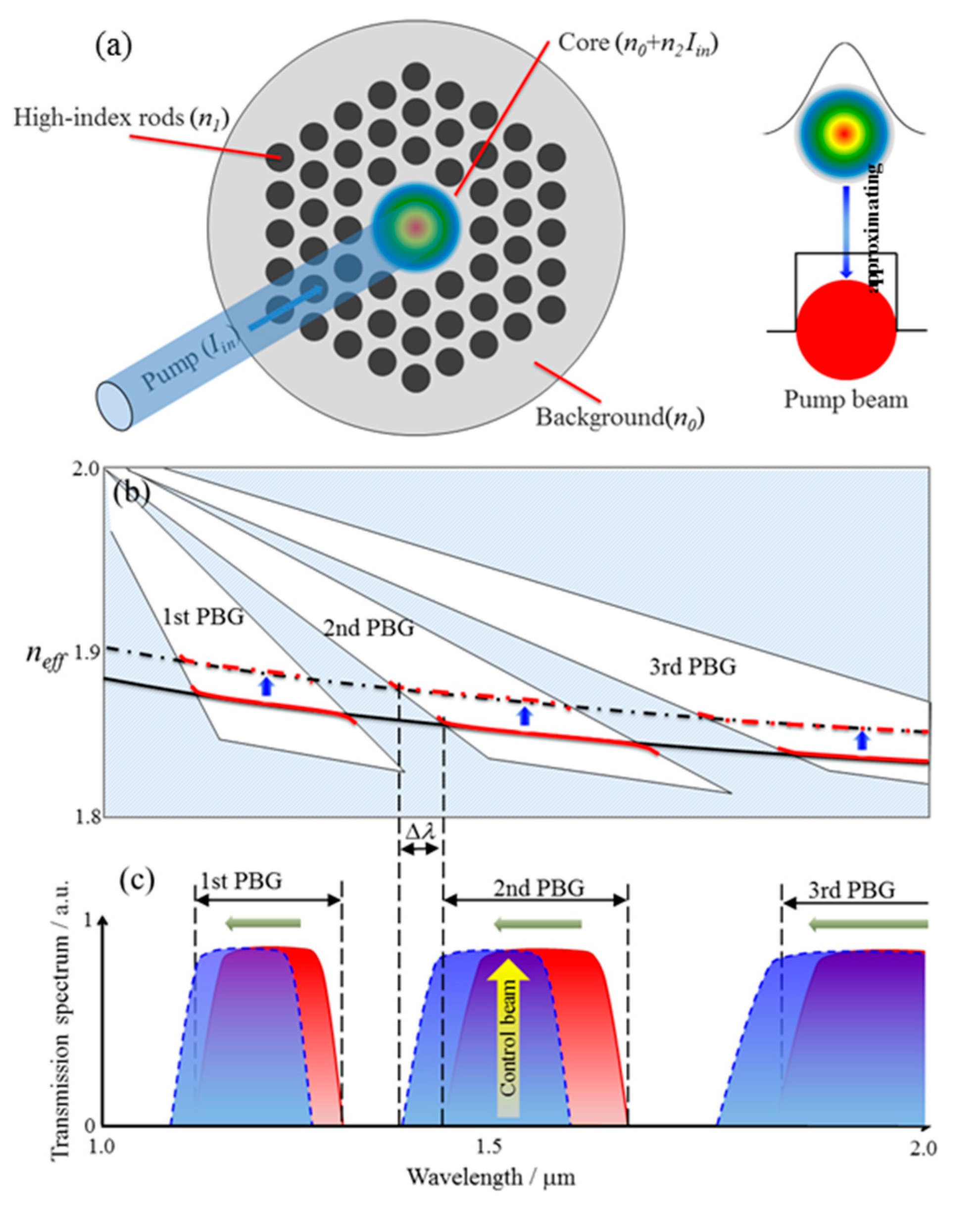 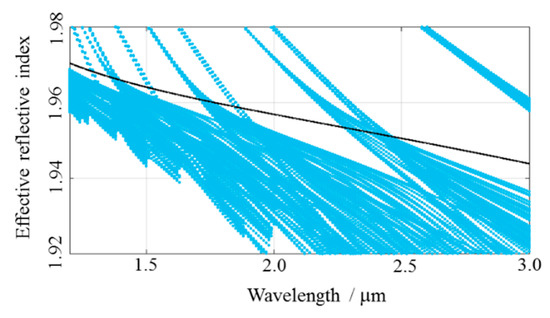 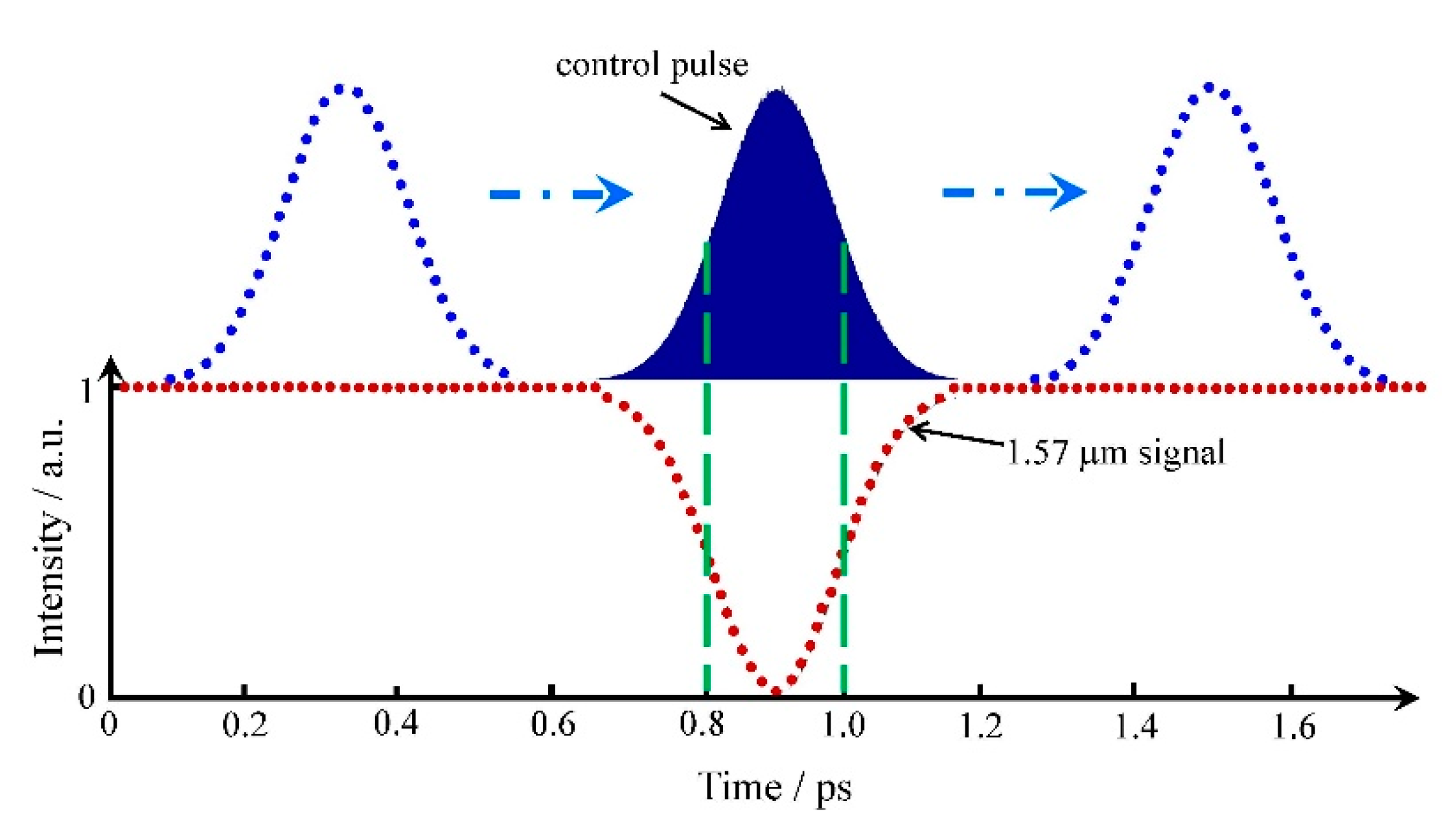