:
In this paper, diode pumped solid state (DPSS) lasers based on end-pumping series and crystals were studied. Dual-, tri-, and quad-wavelength emissions were achieved. In the dual-wavelength emission operation, an optical-to-optical efficiency (O-O) of 48.9% and the power instability was 0.4% were obtained. These are the most efficient and compact lasers operating in continuous wave mode reported to date with series crystals. Besides this, the effect of changing power ratio between the output laser powers on speckle reduction was investigated for the first time. In addition, tri and quad wavelength emissions were achieved with a reasonable efficiency simply by optimizing the cavity parameters.
Keywords:
diode pumped solid state; end-pumping series crystals; Dual-, tri-, and quad-wavelength emissions; Multi emission spectrum; laser speckle reductions; wavelength diversity

Recently, development of laser sources based on end-pumping of series laser crystals with multiple (dual/tri/quad) emission wavelengths has attracted attention due to their potential applications such as THz generation [1], precise spectroscopy [2], imaging [3], biomedical instrumentation [4], lidar [5], and nonlinear scientific research of optical mixers [6].
Many methods have been reported to achieve multi-wavelength emission such as: inserting optical selective elements (OSE) inside a cavity like etalon [7] or birefringent filter [8], by two inequivalent emitting centers coexisting inside the laser crystal [9], by angle tuning for a laser crystal [10], pumping two distinct crystals separately [11], and pumping two different crystals simultaneously [12]. For single gain medium based multi wavelength emissions their lasing wavelengths generally share the same upper energy level which makes their mode competition serious [13], thus, the approach of end pumping series crystals [12] is considered to be a solution. It uses two separate gain mediums and each crystal has its unique wavelength. They do not share the same upper energy levels which means no mode competition exists, thus, the stability is improved. For example, instability as low as 0.25% (the instability for each wavelength component is 1.93% and 1.23%) has been reported for a free-running dual-wavelength end-pumping series crystal laser [3]. Besides this, the technique can also be used to equate the output intensities for the dual wavelength emission without any custom designed mirrors or inserting any OSEs. The dual-wavelength emissions from two series crystals has been demonstrated using a variety of pairs of laser crystals including / [14], / [15], / [15], /, and / [3]. To date, most of the reported end-pumping series crystal lasers are operated in pulsed mode, and the highest reported O-O efficiency was 33% [15].
In the meantime, end-pumping series crystal lasers have a lower laser speckle effect than general single wavelength diode pumped solid state (DPSS) lasers, since the laser speckle can be reduced when multiple wavelengths are blended together [16]. Laser speckle has a significant impact on several applications mentioned above. However, characteristics of laser speckle of end-pumping series crystal lasers have not been studied. Moreover, laser performance of end-pumping series crystal lasers in the continuous wave (CW) mode, which are important in many practical applications, have not been investigated systematically.
In this paper, compact DPSS lasers based on the end-pumping series / crystals are investigated in detail. The characteristics of dual-, tri-, and quad-wavelengths emission are studied and discussed. Laser speckle properties of the developed lasers are studied in terms of the power ratio between the emission peaks and the number of emission wavelengths. CW mode compact lasers based on the end-pumping series / crystals with high O-O efficiency, high stability, and low speckle contrast ratio have been achieved.

The configuration of the end-pumping series-crystals cavity is shown in Figure 1a. A plane-plane cavity structure was used in the laser system. A fiber pigtailed laser diode (LD) was used as the pumping light source. The LD had a central-wavelength of 808 nm, and a maximum output power of 7 W. The core diameter was 200 µm with a 0.22 numerical-aperture (NA). The pumping light from the fiber was elliptically polarized, with a power ratio of approximately 2:1 between its maximum power along the vertical (π-polarization) and horizontal (σ-polarization) directions. A graded-index (GRIN) Lens and a plano-convex lens were used to focus the output beam from the LD. The GRIN lens had a 1.8 mm diameter, 0.23 Pitch, 0° Face Angle, and was anti-reflection (AR) coated at 810 nm, while the plano-convex lens had a diameter of 4 mm and a focal length of 2.5 mm. This beam focusing system was used to focus the laser beam into the gain medium with a minimum beam waist (ω0) of 120 µm.
Two crystals, the first laser crystal () and second laser crystal (), were used as the gain mediums. was 1-at% doped a-cut and was 0.5-at% doped a-cut . The crystals had cross sections of 3 mm × 3 mm and thicknesses of 2 mm and 4 mm, respectively. The input facet of was coated with a high-reflection (HR) coating at 1064 nm and high transmission coating at 808 nm to be used as the input mirror (), the output facet of was AR coated at 1064 nm. Both facets of were AR coated at 1064 nm and 808 nm.
The temperatures of and were controlled by two thermoelectric coolers independently. The output-mirror () had a reflectivity of 85% at 1064 nm. A filter was used to block the remaining 808 nm pumping light after , and a polarizing beam splitter (PBS) was employed to separate the π-polarized and σ-polarized components of the output laser beam. The laser output power was measured by a power meter, and output power stability was characterized as well. The output spectrum was captured by an optical spectrum analyzer (OSA) with a resolution of 0.1 nm.
The relative position of the two crystals are shown in Figure 2b. In the experiments, the π-polarization component of the elliptically polarized pumping light was aligned parallel with the c-axis of . The distance between the crystals in the σ-π configuration was 0.1 mm. The position of the minimum pump beam waist (zo) was varied along the optical axis (in z direction) through the cavity, allowing for the control of the gain and pumping absorption efficiency of each crystal [17]. zo = 0 was defined as the input facet (or ) of . The pump absorption efficiency of each crystal was also controlled by altering the pumping wavelength () which was achieved by changing the temperature of the LD.

Figure 3 shows the setup used for measuring the speckle contrast ratio (SCR). The SCR of the proposed laser systems was measured by projecting the output beam via a projection lens onto a white print paper, then using a CCD camera (C2400 from Hamamatsu/ spectral response: 400–1800 nm) to capture the speckle-pattern. The focal length of camera lens is 50 mm with f/16. Both the distances from projection lens to screen and screen to camera were set to be 50 cm.

In this paper, the end pumping lasers for series crystals have been studied and optimized in the CW mode. Dual output wavelengths were achieved with O-O efficiency of 48.9% in σ-π configuration. This is the highest efficiency reported in literature for this type of laser.
The output power instability was measured for dual wavelengths emission, 0.4% for both 1062.4 nm and 1063.7 nm blended together, 1.1% for 1062.4 nm and 1.9% for 1063.7 nm, the power fluctuation was in between the results in [1,3]. On the other hand, it was expected that the power instability and the spatial beam quality will be deteriorated in case of tri- and quad- emission modes due to the mode hopping and mode competition between the output line emissions.
The generation of tri- and quad-output wavelengths has been performed without adding any optical elements. The maximum power and O-O efficiency was 1W/23.8% and 1.55W/35.4% for tri- and quad-output wavelength emission, respectively.
SCR has been studied for this type of laser as well. It has been shown that the SCR depends on the power ratio of the two wavelengths, and a minimum SCR can be achieved when powers at each emission wavelength are equal, which agrees with the theoretical simulations.
It is worth noting that the present work (in dual emission mode) provides a dynamic way to change SCR of a laser, simply by changing the position of the beam waist of the pumping beam. It is considered that lasers based on the end pumping for series crystals could be very useful to the applications that need low laser speckle, high efficiency, and high power. As a future work, the quality of the output beam should be further investigated and improved.

The authors would like to thank the NSERC Discovery grant for the support of the project. 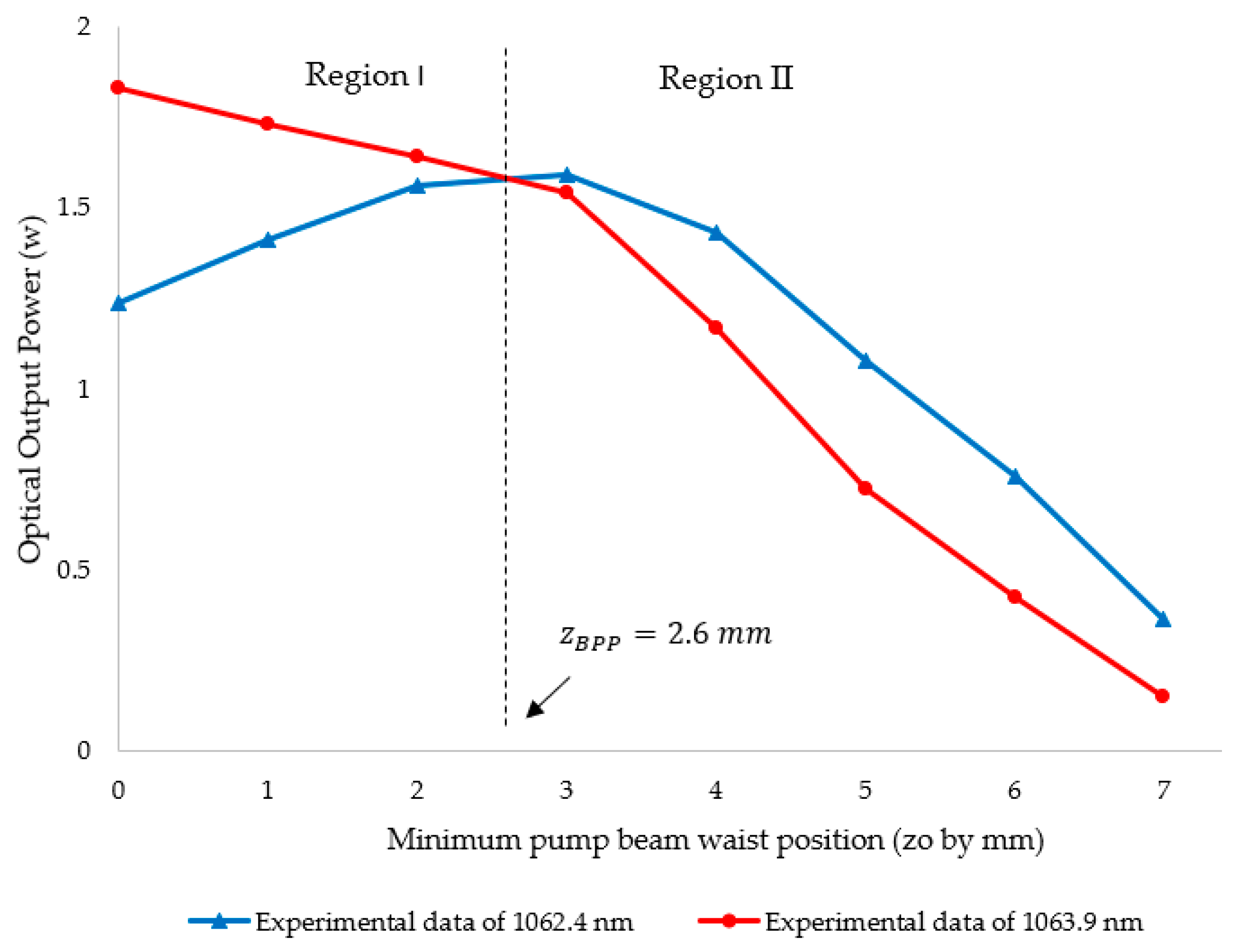 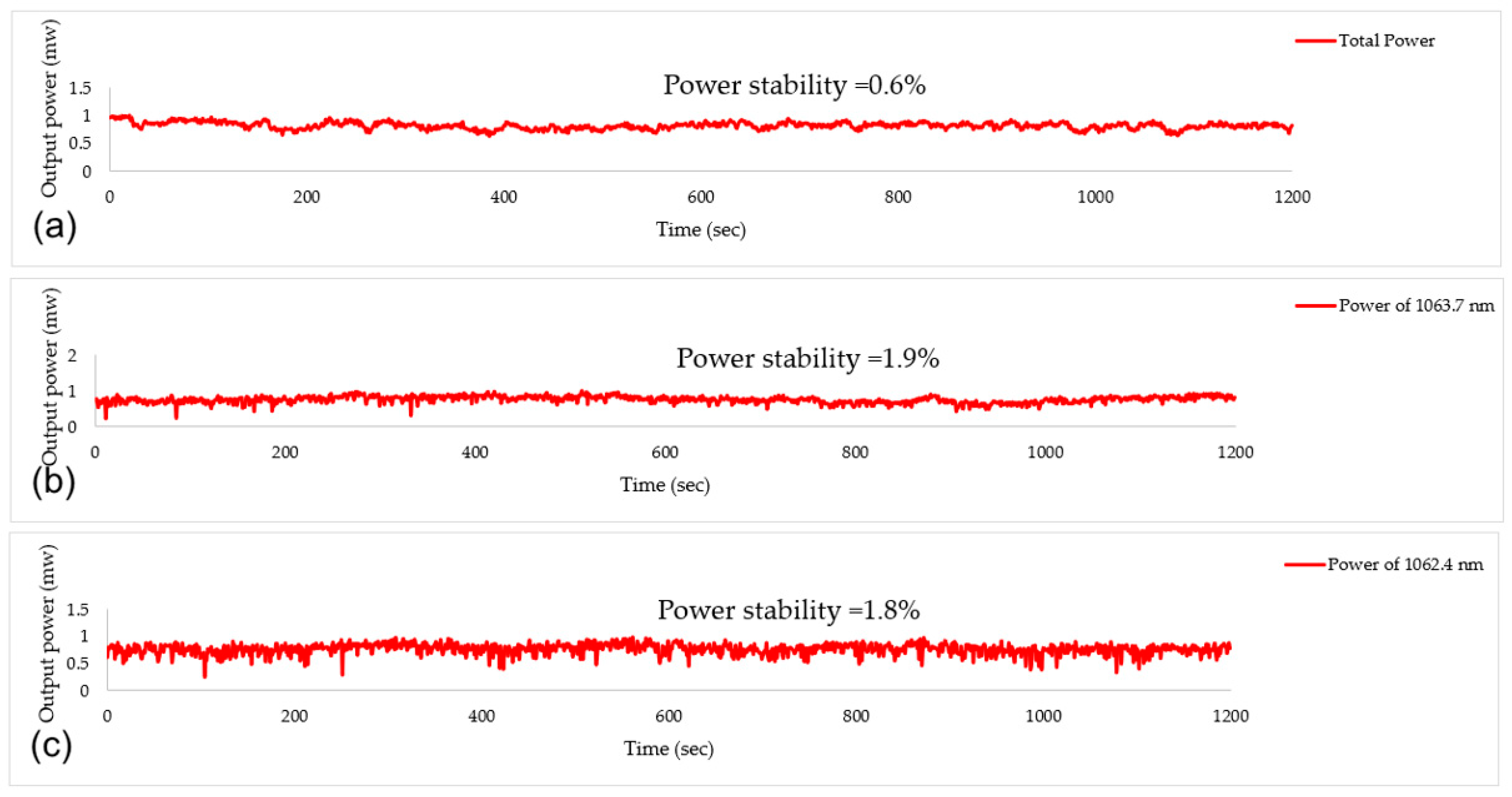 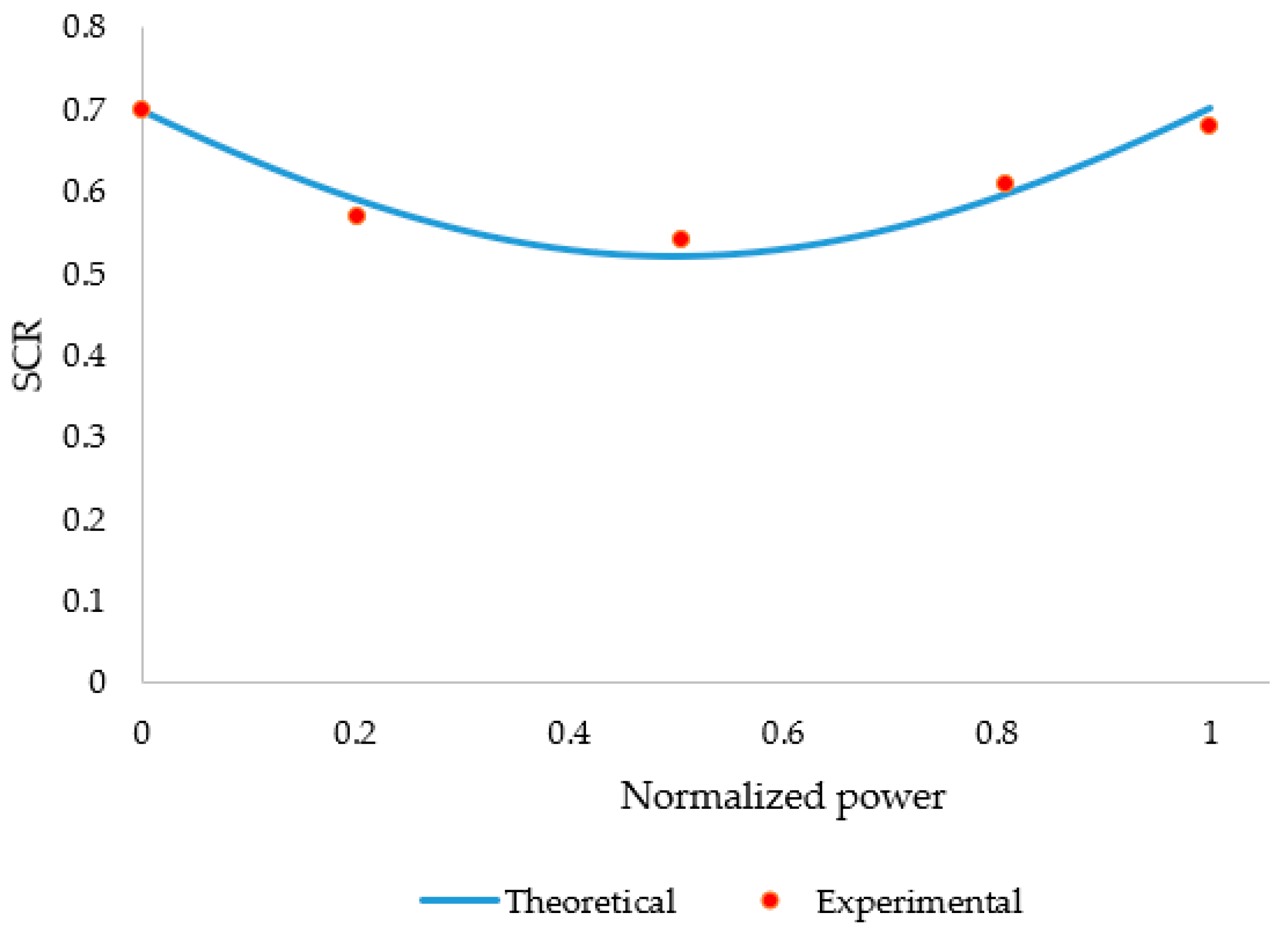