We design an asymmetric nonlinear optical nanoantenna composed of a dielectric nanodisc and an adjacent nanobar. The proposed composite structure made of AlGaAs exhibits resonant response at both the fundamental and doubled frequencies. Being driven by the strong magnetic dipole resonance at the pump wavelength and a high-quality mode at the harmonic wavelength, the efficient second-harmonic radiation is generated predominantly along the vertical directions under the normally incident plane-wave excitation.
Keywords: scattering; second-harmonic generation; Mie resonance; nanoantenna; multipolar interference scattering; second-harmonic generation; Mie resonance; nanoantenna; multipolar interference

Nonlinear nanophotonics is a rapidly developing research field with various applications including nonlinear light sources [1], ultrafast chip-based optoelectronic devices [2], nonlinear microscopy and spectroscopy techniques [3] and bioimaging and sensing [4]. Exploiting nonlinear optical effects in nanostructures plays an important role in the implementation of miniature nonlinear photonic components for further integration of multiple optical functionalities into a single compact optical chip. To this purpose, nonlinear nanoplasmonics has been widely studied both theoretically and experimentally during the last decade [5,6,7,8,9,10]. However, its performance is restricted by the high ohmic losses, small mode volumes and low laser damage threshold. High-index all-dielectric nanostructures provide a powerful platform for controlling light at the nanoscale [11,12]. They offer unique opportunities to boost the nonlinear effects due to the strong near-field enhancement associated with the excitation of Mie-type resonances [13,14]. In recent years, various fabrication techniques, including lithography, chemical methods, dewetting, etc., have been developed for the realization of all-dielectric nanostructures, greatly paving the way for low-cost manufacturing of all-dielectric nanostructures [15,16,17]. Via engineering and control over the optically-induced electric and magnetic resonances in all-dielectric nanostructures, both high nonlinear conversion efficiency and directivity of the harmonic radiation pattern can be achieved. Nanostructures made of high-index semiconductors with a strong nonlinear response, such as Si, Ge, which possess a large third-order susceptibility, have been investigated widely for third-harmonic generation, showing huge nonlinear enhancement when exciting the nanostructure in the vicinity of Mie resonances, particularly magnetic dipole (MD) resonance [18], Fano resonance or collective modes [19,20,21] and anapole states [22,23,24,25]. In contrast to the third-order nonlinearity, Si and Ge do not possess bulk second-order nonlinearity due to their centrosymmetric crystalline structure [26]. However, III-V semiconductors, such as GaAs or AlGaAs, show a strong second-order nonlinear response due to their large bulk second-order optical susceptibility , representing a great deal of interest because of their strong nonlinear effects and optoelectronic properties [27]. By engineering the AlGaAs alloy composition, two-photon absorption can be avoided at the telecommunication wavelengths, enabling high transparency in a broad spectral window from visible to far infrared. Both theoretical and experimental studies have been performed to enhance the second-harmonic generation (SHG) process in GaAs or AlGaAs Mie resonators [28,29,30,31,32,33,34]. The SHG from AlGaAs nanoantennas has been predicted to reach conversion efficiency of , and later, efficiency of was measured experimentally by exploiting the magnetic dipole (MD) resonance [28,31]. However, when employing AlGaAs structures, despite the high conversion efficiency, there were no emitted second-harmonic (SH) signal observed in both the forward and backward normal directions. The absence of the emission at normal directions is due to the specific nonlinear susceptibility tensor of [100]-grown zinc-blend AlGaAs crystalline structures, which only contain off-diagonal elements with . It limits the collected nonlinear signal and restricts many photonic applications, e.g., highly-efficient nonlinear light sources and nonlinear spectroscopy.
In this work, we present a theoretical study on the resonant multipolar effects in AlGaAs nanoantennas in both linear and nonlinear responses. Then, we propose and design an asymmetric AlGaAs nanoantenna composed of a nanodisc and an adjacent nanobar. Under normally incident pump, our nanoantenna supports resonant responses at both the fundamental and harmonic wavelengths, enabling a high second-harmonic conversion efficiency of the order of at the pump intensity of and also normal SH emission due to the the specifically distributed induced nonlinear currents and resonant modes supported by both nanodisc and nanobar. Such highly-efficient longitudinal SH emission has not been realized in [100]-grown AlGaAs nanoantennas to date. Our results may offer new opportunities for the design of new types of novel nonlinear photonic metadevices.

In our theoretical model, we fixed the thickness of our nanostructures to be = 400 nm. The pump is y-polarized with a wavelength of 1550 nm. The widely-used [100]-grown AlGaAs material is considered as the platform for our nanostructures. The second-order nonlinear susceptibility tensor of [100]-grown AlGaAs, possessing a zinc blend crystalline structure, is anisotropic and has only off-diagonal elements with . Thus, in the principal-axis system of the crystal, the i-th component of the nonlinear polarization at the SH frequency is given by:
We use the FEM solver in COMSOL Multiphysics (Version 5.3) in the frequency domain to model both the linear and nonlinear responses of such nanoantennas. First, we simulate the linear scattering at the fundamental frequency. The bulk nonlinear polarization induced inside the particle is then employed as a source for the electromagnetic simulation to obtain the generated SH field. The value of in the simulation is 100 pm/V [28]. The material dispersion of AlGaAs is deduced from [35,36].

2.2. Linear and Nonlinear Responses from a Single AlGaAs Nanodisc

As discussed above, by exciting -oriented MD resonance at the fundamental wavelength, it is possible to induce a parallel-oriented nonlinear polarization from AlGaAs nanoantenna and furthermore obtain the resonant response of SH emission driven by Mode B at the harmonic wavelength. Unfortunately, for a nanodisc under normal pump incidence, the excitation of -oriented MD resonance is not possible due to the symmetry protection. However, by breaking the symmetry of our nanoantenna, it is possible to control the orientation of excited MD resonance. Here, we further introduce an adjacent elongated nanobar to support a broad ED resonance to control the MD excitation of the nanodisc [40]. The schematic of the designed nanoantenna is shown in Figure 6a. It is worth noting that the material and size of the nanobar are also flexible and not restricted to AlGaAs in this approach. Here, for practical purposes, the thickness and material are set to be the same as the nanodisc. As an example, the gap between the disk and the nanobar is set to be g = 100 nm, and the size of the nanobar is set to be length L = 200 nm and width w = 900 nm, to support a strong coupling between the resonances supported by the nanobar and nanodisc. Under normal pump incidence, the MD supported by the nanodisc can be engineered through the interaction with the ED resonance supported by the nanobar. As a result, the MD resonances is re-oriented along to the in-plane direction, similar to the case of oblique pump excitation on a single nanodisc (see Figure 3a). Thus, in the vicinity of Mode B supported by the nanodisc, this MD resonance will further excite strong multipolar resonances during the nonlinear process, leading to highly-efficient normal nonlinear emission.
Figure 6b shows the near-field distributions at the fundamental wavelength; the -oriented circular field distribution reveals the excitation of MD resonance along to the in-plane direction. We further use the internal field inside the nanoantenna to perform the multipolar decomposition for the nanodisc and nanobar separately, as shown in Figure 6c,d. For the disk radius 215 nm, an ED resonance is excited within the nanobar, while an MD resonance is excited within the nanodisc with the suppression of ED resonance, exhibiting also anapole state excitation for the disk radius 215 nm. This will further benefit our target to achieve highly-efficient normal emission driven by Mode B supported by the nanodisc: for a nonlinear process, MD resonance has been well known for its ability to boost the nonlinear process due to the near-field enhancement inside the nanostructure, while for ED resonance, most of the electric energy is located near the edges of the nanostructure, and its ability to enhance the nonlinear process is restricted.
We first investigate the SH emission enhancement through such doubly-resonant nanoantennas. Figure 7a gives the calculated SH emission power as a function of the disk radius. By optically pumping near MD resonance, we are able to obtain strong SH enhancement at the harmonic wavelength in the vicinity of Mode A position 215 nm. Meanwhile, an emission peak also occurs around a disk radius of 202.5 nm. This peak is driven by another mode supported by the nanoantenna at this position, resulting from the alignment of the induced nonlinear current and the mode. However, the far-field pattern from this strong SH emission is nearly null in the forward and backward directions, as shown in the inset of Figure 7a, different from the SH emission pattern driven by Mode B (shown in the following Figure 8).
Figure 7b shows the near-field distributions corresponding to the SH emission peak at disk radius = 215 nm. It resembles the field of Mode B in Figure 2e–g, revealing the resonant response driven by Mode B at the harmonic wavelength. By further tuning the crystalline angle , we are able to slightly tune the nonlinearly generated multipoles. Figure 8a shows the nonlinear multipolar excitation as a function of the rotating angle . Generally, with increasing from –, the excitation of electric dipole resonance increases with other types of multipoles remaining almost unchanged during the nonlinear process. These multipolar excitations further enable longitudinal SH emissions for different and a stronger side-lobe suppression in the far-field radiation patterns for larger (Figure 8b).

In summary, we have demonstrated numerically SHG enhancement based on doubly-resonant AlGaAs nanoantennas. By exploiting the modes supported at the harmonic wavelength, it is possible to shape the SH emission pattern and achieve high directivity. Specifically, we have focused on the SHG process driven by the MD resonance at the fundamental wavelength and a high-quality mode at the harmonic wavelength, which leads to normal emission due to the multipolar interference effect. It is shown that by introducing a nanobar adjacent to the nanodisc, it is possible to achieve highly-efficient longitudinal SH emission under normal pump incidence. Our results demonstrate a method to enhance the nonlinear emission and shape the nonlinear radiation pattern through the control of the induced nonlinear currents, which can be useful for applications such as efficient nonlinear light sources and nonlinear spectroscopy. 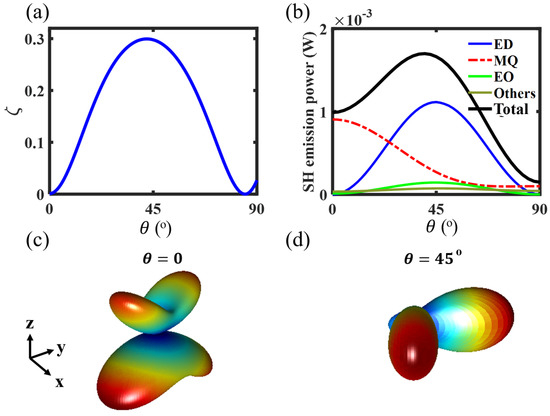 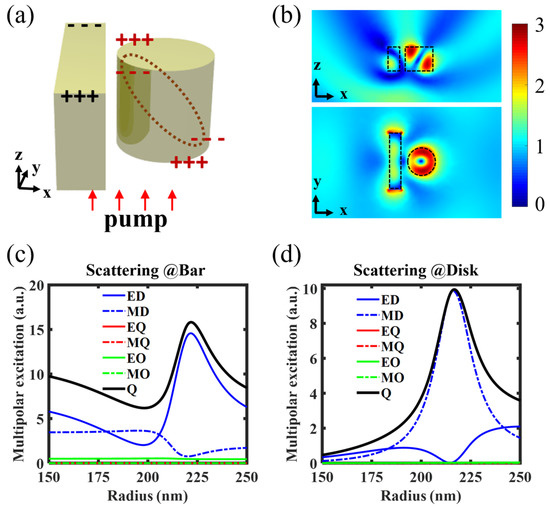