Size Separation Techniques for the Characterisation of Cross-Linked Casein: A Review of Methods and Their Applications
Previous Article in Journal

Compact analytical instruments suitable for point-of-care testing (POCT) have been actively developed worldwide, as exemplified by small devices for immediate bedside examination that rely on the (quantitative) polymerase chain reaction ((q)PCR) [1,2,3,4]. These techniques can enhance the quantification of specific DNA sequences, with the corresponding analytical results being applicable to disease diagnosis (e.g., influenza) [5,6,7,8], environmental monitoring, and microbiological food analysis [9,10,11]. In the case of qPCR, the target gene fragment is monitored by fluorescence spectroscopy, allowing the quantitative analysis of amplified small DNAs. However, this method cannot discriminate between specific and non-specific PCR products, implying that the obtained results can include a contribution from the latter. Slab gel electrophoresis (SGE), frequently used to identify and quantify PCR products, also cannot clearly discriminate between specific and non-specific PCR products owing to the wide peak bandwidth observed in the gel. Compared to SGE, capillary gel electrophoresis (CGE) requires smaller sample volumes and is capable of faster analysis and higher resolution [12,13,14,15,16,17]. The capillaries used for CGE, which have internal diameters of 25–100 μm, allow the use of a higher voltage relative to that for SGE owing to better Joule heat dissipation. As CGE can clearly identify non-specific PCR products owing to the small bandwidth of the observed peaks, we adopted it as a method for PCR product analysis and are currently developing the corresponding compact equipment for POCT. In CGE, the separation time decreases with increasing applied voltage, owing to increasing DNA flow speed in the capillary [18]. Additionally, an electroosmotic flow (EOF) exists inside the capillary, opposing DNA flow and blocking DNA insertion. Mathematical analysis suggests that a constant EOF magnitude contributes to the robustness and durability of the CGE process, implying that EOF control is strongly required for the efficient separation of small DNAs [19].
In previous studies, EOF control was achieved by changing the wall surface charge density (σ*) and solution viscosity (η). Generally, the EOF can be reduced by coating the capillary surface with polymers such as polyacrylamide [20,21], polyvinylpyrrolidinone (PVP) [22], and polyethylene glycol (PEG) [23,24,25,26,27]. On the other hand, EOF control has previously been achieved by decreasing the double layer thickness, owing to an increase in the electrolyte concentration or reducing the permittivity of the buffer solution [28,29]. However, these approaches are limited by increased Joule heating in the capillary at increased electrolyte concentrations. Alternatively, EOF control can be achieved through buffer viscosity changes by utilizing hydrophilic polymers [30,31,32].
Herein, effective EOF modulation for small DNA separation was achieved by controlling the surface charge on the capillary wall using a coating of an uncharged polymer (polyacrylamide (poly(AM)) modified with a negatively charged component (acrylic acid (AA)), which improved the CGE separation ability. As the primary objective of this research was to develop a compact analytical instrument for POCT, a short capillary (total length: 15 cm, effective length: 7.5 cm) was used to enable the application of this method in small devices. CGE measurements performed using the copolymer-coated capillary revealed the effect of AA content on the separation of small DNAs, allowing the optimal copolymer composition to be determined.

After washing the capillary with 1 N NaOH (15 min), water (15 min), and methanol (15 min), it was flushed with 20 mL of an aqueous solution containing 3-methacryloxypropyltrimethoxysilane (Shin-Etsu Chemical, Tokyo, Japan; 80 μL), methanol (1 mL), and one drop of acetic acid for 2 h at room temperature, which resulted in covalent bonding of the silane to the capillary glass wall. The capillary was washed with methanol and water, and monomer solutions were flowed for 2 h at room temperature. The monomer solutions were prepared by dissolving acrylamide (AM) and acrylic acid (AA) monomers, ammonium persulfate (APS; 20 mg), and N,N,N′,N′-tetramethylethylenediamine (TEMED; 20 μL) in 20 mL of water, followed by deoxygenation for 30 min with nitrogen gas. The total monomer weight equaled 0.7 g, with the used AA/AM compositions shown in Table 1. After exposure to the monomer solutions, the fused silica capillaries were rinsed with water.

The EOF measurements were conducted via fluorescence detection in 0.5 wt % HEC in 0.5× TBE buffer. Neutral coumarin 334 in 0.5× TBE buffer solution was selected as a fluorescence marker. In this measurement, the neutral marker was injected into the capillary by applying a voltage of 1.5 kV for 1 s from the cathode, with subsequent application of an electric field of 100 V/cm.

We demonstrated that the EOF can be effectively used to control DNA flow in a CGE capillary during separation. Optimization of the AA content of the poly(AM-co-AA) capillary coating revealed that DNA samples could not be injected at AA contents above 3.75 mol %, owing to the strong EOF opposing DNA flow. Conversely, AA contents below 3.5 mol % allowed the 100 bp DNA ladder to be clearly separated. The EOF values measured using a solution of neutral coumarin 334 were significantly lower at AA contents below 3.5 mol %, compared to those at AA contents above 3.75 mol %. The optimum performance was observed for an AA content of 2.75 mol %, which corresponded to the maximum theoretical plate value for the separation of DNAs with sizes ≥600 bp in the 100 bp DNA ladder. These results demonstrated that even a slight variation in the AA content can significantly affect DNA flow, particularly for ≥600 bp DNAs in the 100 bp DNA ladder. The observed trend indicated that the EOF can be controlled by varying the amount of negatively charged AA in the poly(AM-co-AA) coating, which will allow further development of short capillaries for POCT applications. 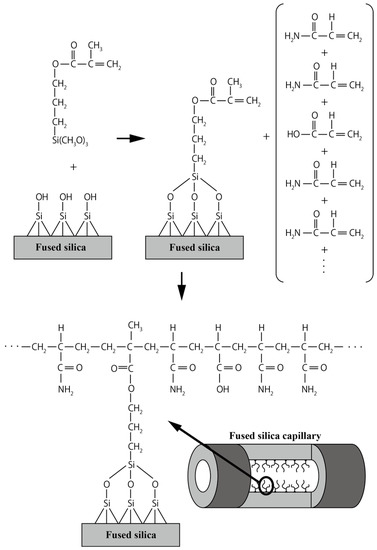 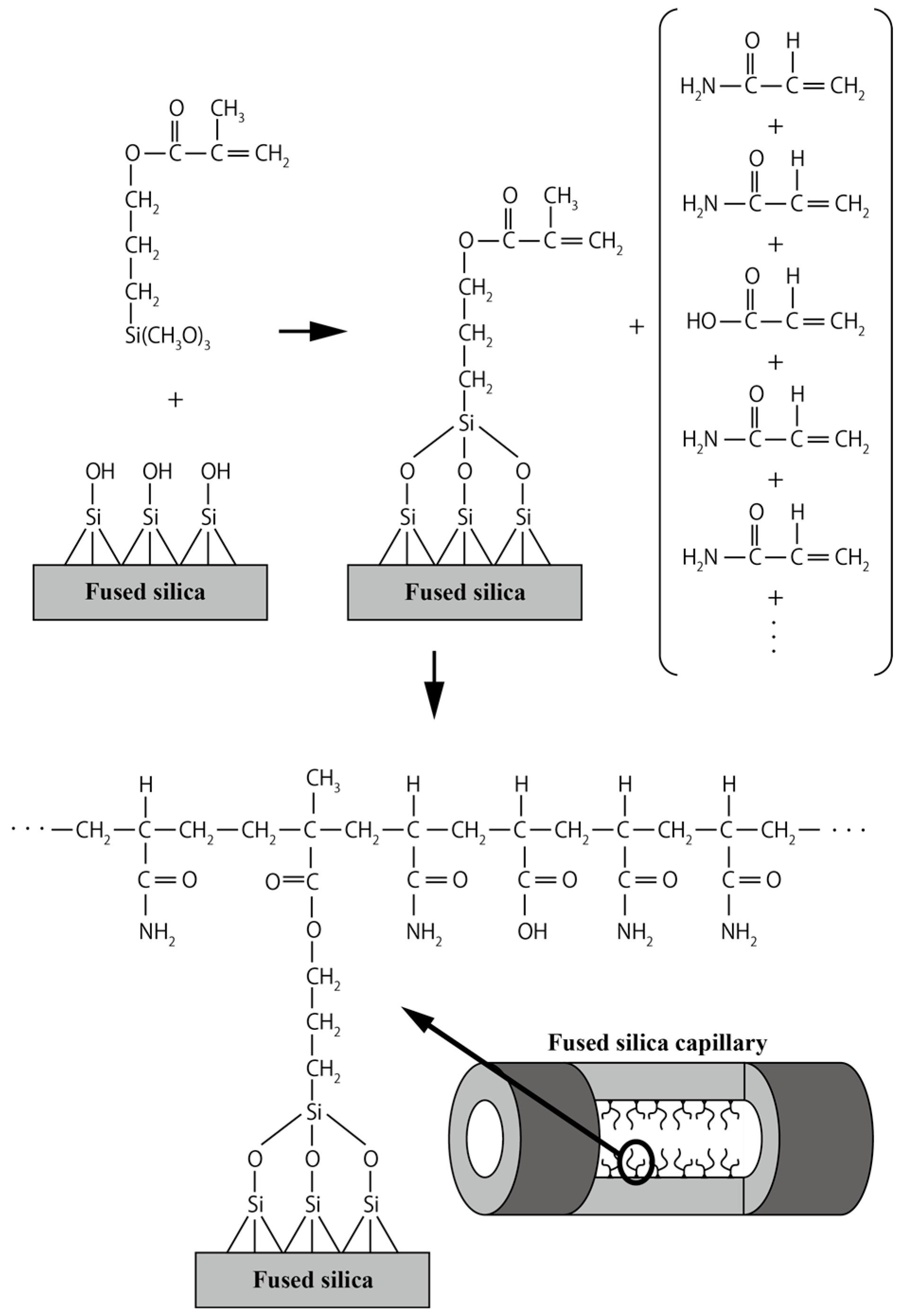 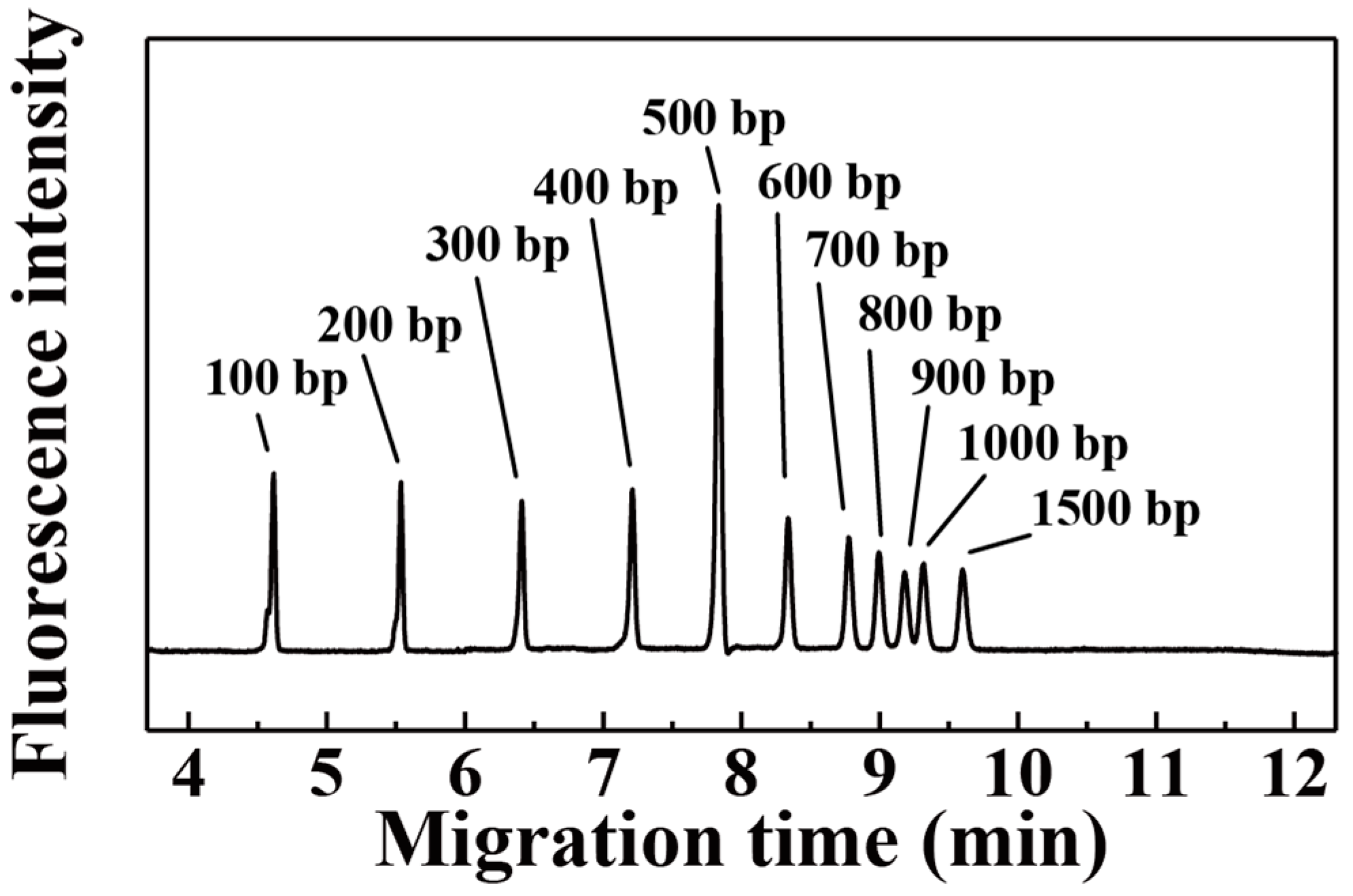 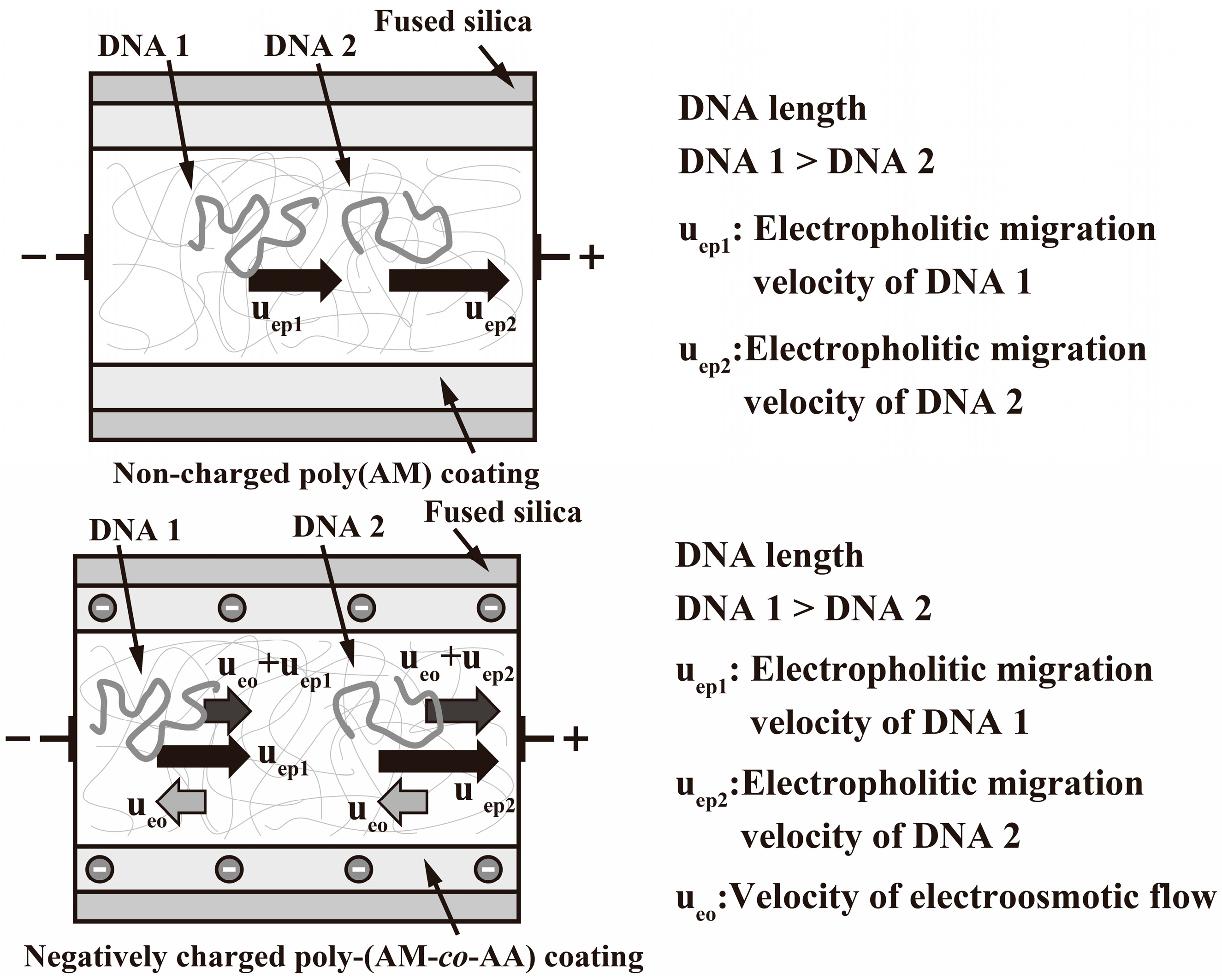 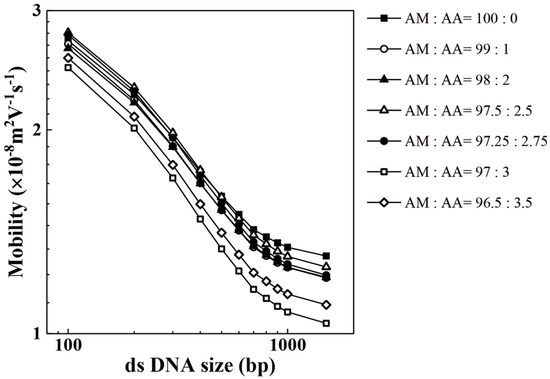 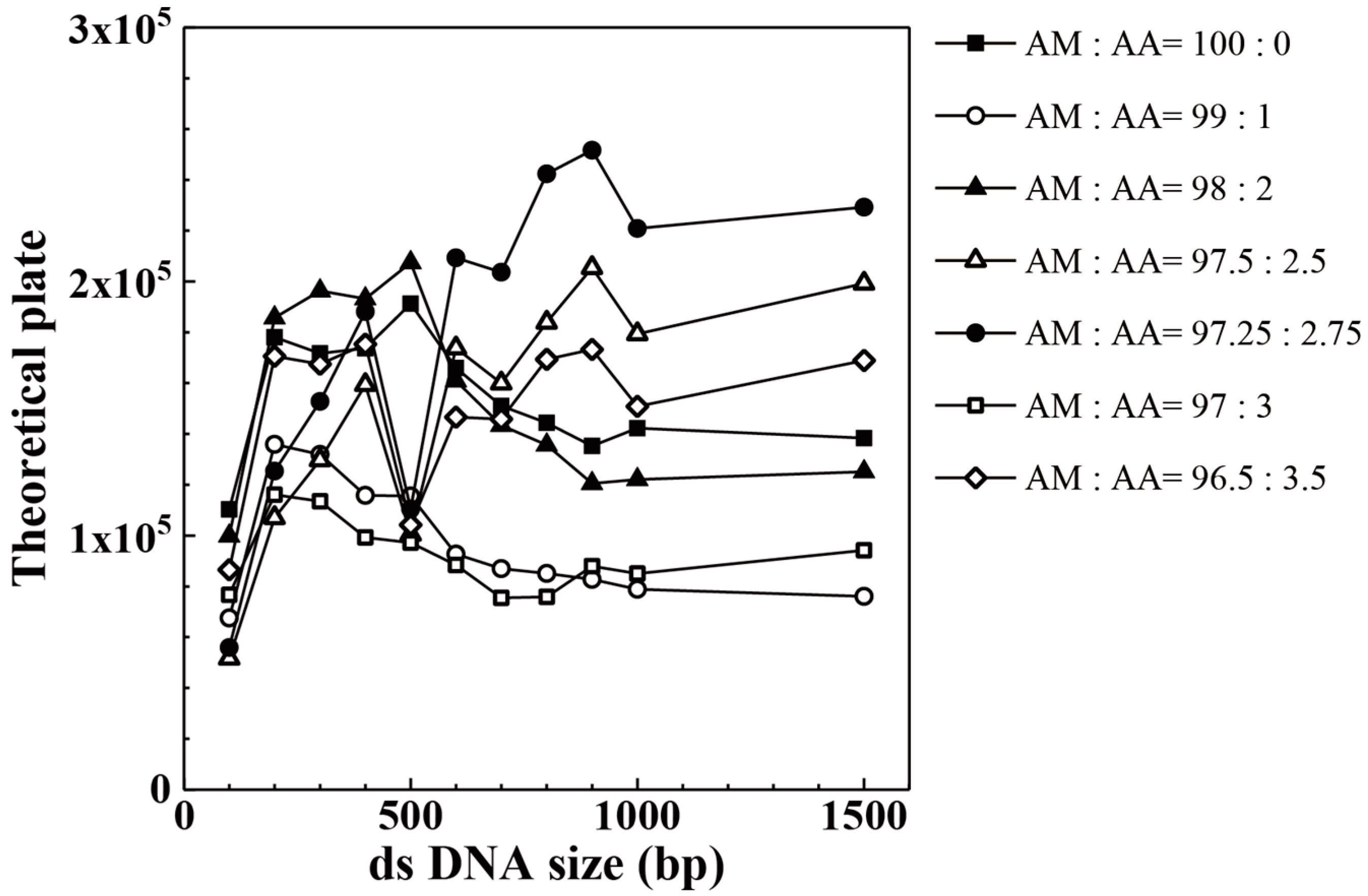