The importance of health is beyond doubt in today’s society, and health and wellness models are considered an important goal to be achieved and maintained throughout life [1]. The different actions in this sense are implemented transversally throughout the entire life cycle of the person because their beneficial effects are indisputable. The available scientific evidence shows the importance of health, well-being, leisure, and free time for the positive development of the person throughout his or her development [2,3,4,5,6]. However, it is necessary to continue the research on the impact of different lifestyles and their repercussion on happiness and the use of free and leisure time of the child population. In doing so, the ultimate aim is to prevent situations that negatively affect the normal development of the child and promote those leisure time activities that lead to a solid consolidation of attitudes and habits that materialize in a state of personal satisfaction.
Regarding this and central to our research is the concept of subjective well-being, which refers to a person’s subjective evaluation of the quality of his or her life [7]. Its study comprises the scientific analysis of how people evaluate their life in a specific or generic way [8], and it is especially interesting from the point of view of a positive vision towards human development. We can define leisure as the set of free and gratifying experiences that take place in free time, where emotions, motivations, values, benefits, or perceptions acquire great protagonism [9,10]. In this sense, leisure is fundamental for the development of the person. Lifestyle in leisure time refers to the way of life of an individual or population group, which is influenced by personal characteristics and individual behavior patterns, as well as by general living conditions and sociocultural aspects [11], and does not refer exclusively to physical health, but also considers mental health, giving a relevant role to social and emotional intelligence [12].
What actions performed in children’s free time and leisure time lead them to perceive greater personal satisfaction? It seems that interpersonal situations that lead to sharing or spending time with others favor the feeling of happiness. Time spent with others, the acts of generosity and the dynamics of helping and sharing during physical activity with others contribute to greater happiness than those behaviors aimed at obtaining material goals [13,14]. Many hours spent in front of a screen have a negative influence on sports activities and physical exercise [15]. Other contributions showed that the simple fact of having free time is a source of personal satisfaction [16]. More specifically, it seems that activities related to physical activity and sport are considered pleasurable for children [1].
Concerning the most cited areas for subjective well-being, reported by 11 and 12-year-old children, results have underlined such aspects as family, leisure, friendship, school, and receiving gifts [16]. Regarding leisure time, it has been shown that physical activity is an element that enhances psychological well-being, producing an increase in self-esteem, a more positive self-concept, and improving cognitive functioning, as well as some important benefits in social relationships [17]. According to the WHO definition, physical activity can be defined as “any bodily movement produced by skeletal muscles that requires energy expenditure and can be performed at a variety of intensities, as part of work, domestic chores, transportation or during leisure time, or when participating in exercise or sports activities” [18] (p. 15). Strong evidence indicates that physical activity in children and adolescents confers the following health related issues: improved cardiorespiratory and muscular fitness, reduced adiposity, better cardiometabolic and bone health, better cognitive functioning (i.e., better academic performance and improved executive function), and reduced depressive symptoms [18]. The WHO recommends at least 60 min a day of physical activity to develop these positive outcomes, as well as advising a limit to the amount of sedentary time, especially recreational screen time [18], taking into account that sedentary lifestyles gradually increase with age while physical activity decreases, which is detrimental to people’s health [19]. The international Health Behavior in School-aged Children (HBSC) study conducted in 42 countries in Europe and North America showed that approximately 63% of adolescents exceeded screen time recommendations [20], meaning that daily tasks involving the company of others are being reduced [21,22]. In this sense, adolescents recognize that they spend less time doing leisure activities such as playing sports [23].
Further research is needed to examine the differential effects of active vs. sedentary leisure time activities on adolescent subjective well-being in a cross-national manner. The analysis of these effects in different countries in the European Union could provide some ideas to motivate policy design for strengthening adolescent well-being.
The aim of the present study is to analyze the life satisfaction of 12-year-old adolescents in relation to their leisure time; specifically, whether they give more priority to sport and physical activity or to being in front of a computer/screen. The data used in this publication come from the third wave of the Children’s Worlds project, an international survey of children’s lives and well-being. We expected that the practice of sport or exercise in leisure time would be more strongly associated with higher life satisfaction than the frequency of playing electronic games.
This research aims to provide cross-national evidence in some countries from the European Union with representative samples of girls and boys just before the transition to Secondary education. This period is especially important in the development of healthy lifestyles in subsequent years. As well, this research is important because it aims to contribute to the development of policies that promote active leisure activities that favor subjective well-being and quality of life in school-age children based on evidence [24].

The data used in this publication come from the third wave of the Children’s Worlds project, an international survey of children’s lives and well-being (www.isciweb.org, accessed on 1 August 2022). The views expressed here are those of the author(s), not necessarily those of ISCWeB. Children’s Worlds is world-wide research into subjective wellbeing in childhood and its determinants. This project’s purpose is increasing awareness about the need to improve psychological wellbeing in children, in order to influence government policies and services around the world. This survey collected information regarding subjective well-being, daily activities, and developmental contexts in children aged 8, 10 or 12 years old. Specifically, the present work analyzed data from 12-year-old children from the nine participating countries from the European Union, with our variables of interest. We chose the European Union sample in order to examine children whose developmental contexts and culture are more similar, as well as aiming to provide some insights from policy design in these regions. This age is included in early adolescence, which is a crucial stage in the development of lifestyles and psychological well-being, while facing puberal changes and encountering changes in social relationships, and just before the transition to Secondary education. A cross-sectional and descriptive study was conducted in these nine European countries. Data collection was carried out throughout 2017 by administering an online self-report measure to a representative sample of children in the selected schools. All the enrolled students were invited to participate in the study. Ethical approval was obtained in each country, as well as informed consent from parents and adolescents. Participants’ anonymity and confidentiality were respected.
The sample was composed of 10,626 children (50.9% boys) from nine European Union countries: Belgium (Flemish) (10.1%); Croatia (10.9%); Estonia (10.2%); Hungary (9.4%); Italy (Liguria) (11.1%); Malta (7.1%); Poland (10.9%); Romania (10.8%); and Spain (Catalonia) (19.6%). Concerning cohabitation, 98.3% lived with their families, and 92.2% of the sample reported that they always slept in the same house.

3.2. Effects on Life Satisfaction by Playing Sports and Electronic Games

3.3. Relative Frequency of Playing Sports vs. Electronic Games and Differences in Life Satisfaction

Thus, this study presents conclusions that highlight the practice of physical activity as a value of high social and individual impact in the search for people’s own satisfaction with life. Its results are intended to be a contribution to the development of childhood policies, providing reliable information that guides educational and social practices in their ability to consolidate programs that encourage sport and recreation, as well as promote moderate sedentary behavior and, thus, increase the possibility of developing subjective well-being and quality of life in school-age children. The present research showed that in both boys and girls of nine countries from the European Union, physical activity showed a positive effect on life satisfaction, while no remarkable effect was observed by sedentary behavior such as playing electronic games.

This research received no external funding. The original project that provided the data was supported by the Jacobs Foundation.

The study was conducted according to the guidelines of the Declaration of Helsinki. Approval was obtained from the relevant ethics committee in each country prior to the survey being conducted. More details on the data collection procedure in each country can be consulted at www.isciweb.org and https://www.allianceforchildhood.eu/files/Improving_the_quality_of_Childhood_Vol_7/QOC%20V7%20CH12%20DEF%20WEB.pdf (accessed on 1 August 2022). A set of broad ethical guidelines for the project were drawn up, including the importance of (a) children having an active and informed choice in whether to participate in the survey or not; (b) appropriate measures to safeguard children’s privacy, confidentiality, and anonymity; and (c) a commitment to feeding back the findings to participating schools.

Data are accessible on the website www.isciweb.org (accessed on 5 March 2022).

The data used in this publication come from the third wave of the Children’s Worlds project, an international survey of children’s lives and well-being (www.isciweb.org, accessed on 1 August 2022). The views expressed here are those of the authors. They are not necessarily those of ISCWeB. 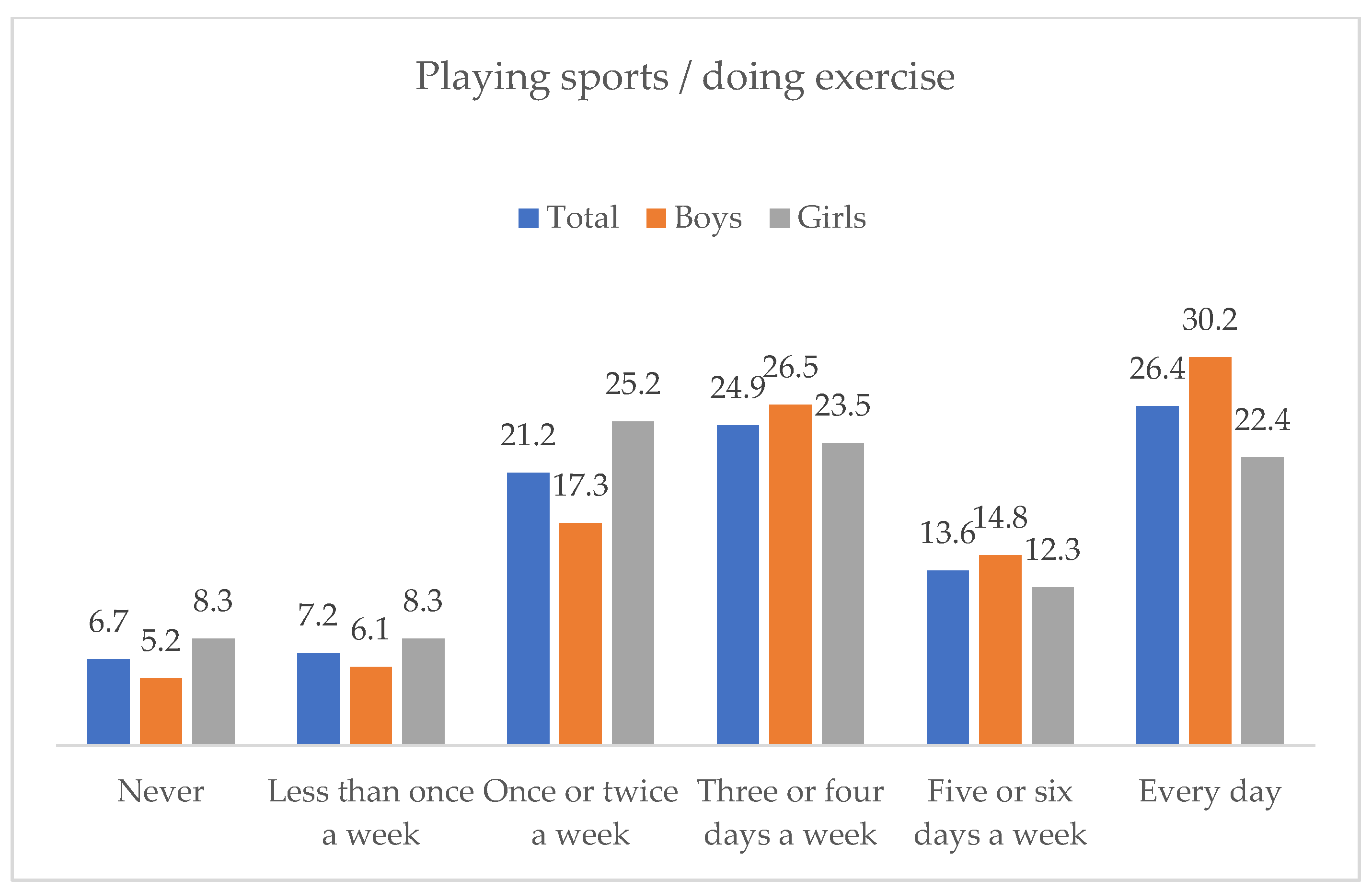