The Topic of the Ideal Dairy Farm Can Inspire How to Assess Knowledge about Dairy Production Processes: A Case Study with Students and Their Contributions

Simulation Tests of a Cow Milking Machine—Analysis of Design Parameters

Simulation tests and a sensitivity analysis of a cow milking cluster were conducted with the use of a simplified model of vacuum drops in the form of a fourth-degree polynomial.

Vacuum drops in a milking machine are defined by Bernoulli’s equation which is a physical model of the flow of a mixture of milk and air in the long milk tube. In this equation, the reduced velocity of mixture uM is the sum of the reduced velocities of milk and air.
The paper includes the following assumptions [62]:
In addition, considering the calculation’s assumption that p = (po + Δpkol)/2, and taking the assumed relationships between the reduced velocity of the (milk/air) mixture and volumetric air coefficient αpdpm into account, Majkowska [63] determined a simplified Bernoulli’s equation in the following form:
Velocity v∞ is calculated using the following formula: where: where:
Qm, Qp—flow of milk [kg·min–1] and air [m3·h–1];
D—diameter of the long milk tube [m];
H—head [m];
ldpm—length of the milk tube [m];
po—operating pressure [kPa];
pN—atmospheric pressure in normal conditions, 100 [kPa];
pkol—pressure in the claw’s milk chamber, [kPa];
αpdpm—volumetric air coefficient in the long milk tube [-];
ζ—local loss coefficient, [-];
λ—linear loss coefficient, dependent on the relative roughness of the tube and the Re number;
ρm, ρp—density of milk and air [kg·m−3];
R—air gas constant 287 [J kg K−1];
T—temperature, [K];
Re—Reynolds number, [-];
qm—flux in milk mass (milk-like liquid) flowing in the long milk tube, [kg min−1];
σ—surface tension of the liquid, [N m−1];
v∞—velocity of rising a single bubble in a still liquid, [m s−1];
Adpm—cross-sectional area of long milk tube, [m2].
The following additional simplifications were assumed:
The discussed relationships made it possible to assume the bubble velocity in the vacuum drop model to be constant for a given milk tube diameter. After substitutions Δpkol = x and v∞ = c, and taking into account that pN = 100 kPa = 105 Pa, expression (2) takes the following form:
Transforming this, we get:
Multiplying by the factor and denoting v∞ = c, polynomial is obtained:
After transformations and carrying the terms to one side, Equation (8) takes the following form:
Giving Bernoulli’s equation as a polynomial enables the use of more effective methods of calculating x from Equation (9), simplifying the analysis of vacuum drops in the long milk tube.
The searched vacuum drops are real roots of the following function:
Absolute term ww of polynomial (10) has the form:
Given that all its factors are positive, it can be concluded that, irrespective of the design parameters of a milking cluster, the vacuum drop will not be equal to zero (the number zero cannot be a zero of a polynomial).

2.2. Verification of a Model with a Simplified Structure of Vacuum Drops in the Claw

The vacuum drops calculated by the model (1) and the simplified model (10) were compared. The comparison of the models concerned different milking speeds and different air streams admitted in milking machines with a high-lying milk tube and canning machines for the diameters of a long milk tube in the range from 0.01 to 0.02 m. Relative errors of the simplified model (10) and model (1), regardless of the type of milking machine, milking speed and admitted air stream, do not exceed 3%. The small discrepancy in the models allows for Bernoulli Equation (1) to be replaced with its approximation, with a fourth degree polynomial (10).
Figure 1 and Figure 2 show the relative errors of the drops, calculated on the basis of model (10), in relation to the drops calculated using model (1). The results confirm that the models are compatible.
The model of vacuum drops (10) was also verified with the experimental data presented in the work [23]. The comparison of the simplified model with laboratory data also shows the high compatibility of the simplified model (10). The mean absolute error of this comparison is 0.03 kPa. The obtained results authorize the adoption of a simplified form of the vacuum drops model in the long milk tube for further consideration.

2.3. Sensitivity of a Model with a Simplified Structure of Vacuum Drops in the Claw

A model sensitivity test includes the examination of the value of changes in the model status variable when model parameters are changed at preset input variables. In the vacuum drop model, the division of input values into input variables and parameters arises from the underlying assumptions. When the parameters are changed from As to As +ΔAs, the status of the model will change from x to (x + Δx + o(║As║) ). The drop model equation meets the assumptions of the implicit function theorem. A set of values of polynomial W(x) was analysed for coefficients that were the functions of preset parameters As and input variables Us present in a milking cluster (vectors As and Us). Elements of vector Us belong to set Ωs:
For input variables Us belonging to domain Ωs (12), the polynomial includes real roots. At each point, the polynomial is a function of class C1. Given the simple form of function (10), the following derivatives were calculated analytically:
It was numerically tested that, in domain Ω and for the drops observed in reality, that is, for x∈(0, 5000) [Pa], the derivatives of polynomial (10) after x do not equal zero. At the determined point in domain P = [x0, As0, Us0], the derivative of the function defining an explicit form of variable x relative to the parameters composing vector As is expressed by the following formula:
The differential Δx of the vacuum drops is expressed as a scalar product:
The vacuum drop model and the related sensitivity model are shown in the block diagram in Figure 3.
Equation (16) makes it possible to examine the sensitivity of the drop model in a simplified structure, relative to any disturbances introduced to the parameters (and input variables). It is a convenient tool for simulating variations in drops resulting from changes in the input of the drop model. Equation (15) allows for the values of partial derivatives (11) to be traced. By analysing the sensitivity of the model to changes in the value of the vector of variables and input parameters, the strength and direction of the impact of changes in input values on changes in the status of the model can be examined. In some cases, sensitivity analysis may indicate the existence of an extremum of the analysed function.

Sensitivity analysis of the vacuum drop model was performed with the use of formula 16. The values of differential Δx(As0, Us0, Qm) referred to the values of drops x(As0, Us0, Qm), and are expressed as a percentage. The sign of the differential indicates the direction of changes, while its absolute value shows the strength of the impact of the change in parameter Asi on changes in value x at point (As0, Us0, Qm). Quotient is often used as a measure of model sensitivity. In this paper, ten percent changes in the parameters were analysed. The analysis of the results presented later in the paper will concern the expression The sensitivity of model (9) was tested for points from the allowable set Ωs (12).
The diagrams in Figure 4 and Figure 5 show relative values of the differentials expressed as a percentage. They correspond to the values calculated for a series of points P0i, given in the legend below. A point in the legend is clearly identified with a colour and an index. The value of the differential (Figure 4) is calculated at the point with index “i”.
The value of the differential (Figure 5) is calculated at the point with index “i”.
Legend for Figure 4 and Figure 5.
P0i = (Qpi, Di, Hi, ldpmi, poi, ζ, λ where qm = 10 kg min−1, ldpm = Hi + 0.3 m
Milk mass flux qm is a value set for the actual milking phase. In practice, this value is not constant. Similar calculations were performed for different milk mass fluxes. Change qm does not alter the opinions on the model’s sensitivity to changes in the parameters. The observations point to the following relationships between the design parameters of the milking machine and the milking process:

The preparation of a vacuum drop model in the claw, in the form of a model with a simplified structure, by expressing Bernoulli’s equation as a fourth-degree polynomial, allowed the sensitivity model to be analytically developed. Examinations of the sensitivity of a simplified-structure drop model to any disturbances introduced to the parameters resulted in the formulation of a number of recommendations for the design parameters of the milking machine. Based on these examinations, certain general relationships can be presented:
The methodology applied in this paper makes it possible to carry out a broader analysis of the impact of design parameters of milking machines on the milking procedure, leading to improvements in the design of these machines.

APC was partially funded by the Institute of Mechanical Engineering, Warsaw University of Life Sciences. 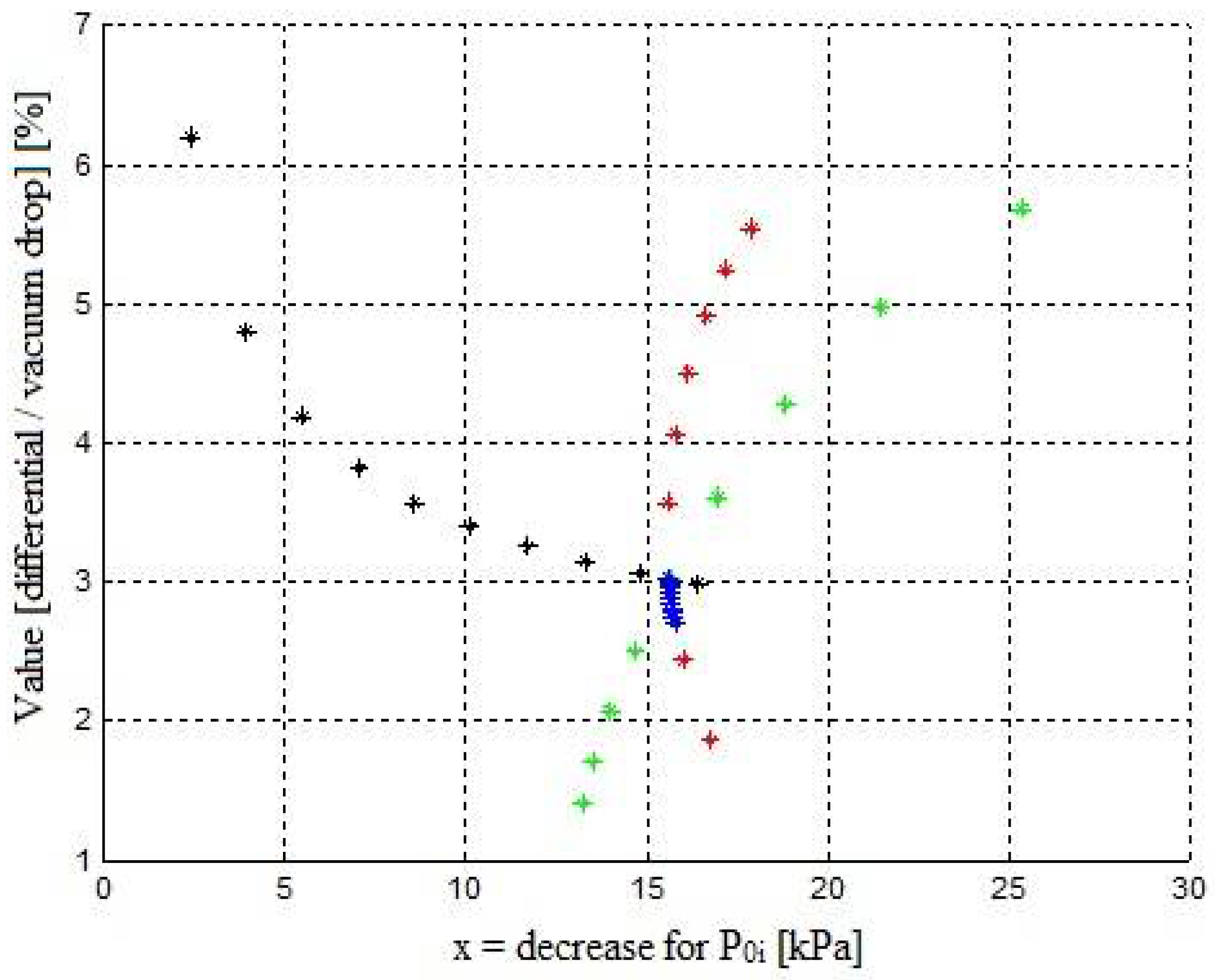