Vitamin K is a group of lipophilic molecules, of which vitamin K1 (phylloquinone) constitutes the major part of our diet [1]. The chemical structure of vitamin K consists of a 2-methyl-1,4-naphthoquinone structure with a side-chain in the third position [2]. According to the structure of the side-chain at the third position of the naphthoquinone ring, vitamin K can be divided into different subtypes, such as K1, K2, K3 and K4. Vitamin K1 has a singular form but menaquinones (vitamin K2) include fourteen isoforms (MK-1 to MK-14) with a variable side-chain of n isoprene units (Figure 1), generating a series of isoforms referred to MK-n [3,4].
Vitamin K3 (menadione) is a used synthetic member of the naphthoquinone family and becomes biologically active by its conversion in the human body to MK-4, but may be toxic [3,5,6] and is also considered as an anticancer agent [7]. All forms of vitamin K have one well-known function: it plays an essential role in the activation of specific proteins involved in blood clotting cascade or bone metabolism, such as osteocalcin and prothrombin, as a cofactor for the post-translational enzyme γ-glutamyl carboxylase [8,9] Moreover, vitamin K2 (menaquinone) is considered as an agent in the prevention of osteoporosis [3,10].
Another molecule belonging to the fat-soluble vitamins group, also playing an important role in calcium metabolism is vitamin D [11]. It is mainly composed of two chemical forms including vitamin D2 (ergocalciferol) and vitamin D3 (cholecalciferol) [12]. It has been defined that vitamin D2 has a more minor role than vitamin D3 [13]. Vitamin D and its metabolites regulate calcium and phosphate homeostasis [14,15]. Besides, vitamin D3 by its active form—calcitriol (1,25-dihydroxyvitamin D3)—displays different actions, controlling blood pressure, insulin secretion, regulation of immune system, and controlling cell differentiation [15,16]. The human organism is capable of synthesizing the active form of vitamin D from 7-dehydrocholesterol (7DHC) upon UV irradiation [17].
Rich sources of vitamin K1 are green leafy vegetables, vegetable oils like soybean and olive [18]. Menaquinones (MKs) are primarily synthesized by bacteria and are found in much lower amounts in the food supply in dairy, meat, and fermented food products also converted from dietary phylloquinone [18,19,20]. Vitamin D and its analogues are found in animal food products, such as meat, offal, eggs, fish, milk and dairy products [21]; similarly, vitamin D2 is found in fortified milk and other dairy products but also in yeast and mushrooms [22]. However, sun exposure is a major contributor to vitamin D in humans [23].
It is estimated that, on an annual basis, 40% of the European population is either vitamin D insufficient or deficient [24]. Based on a scientific opinion of the European Food Safety Authority (EFSA) panel, on the dietary reference values for vitamin K, it was concluded that the available evidence on occurrence, absorption, function, and content in the body or organs of menaquinones is insufficient [25]. In contrast, the menaquinones are present in the food supply, although there are limited food composition data available [18]. The optimal concentrations of both vitamin K and D are beneficial for bone and cardiovascular health, as supported by some human and other studies. Although, based on the current studies, there is not enough evidence to recommend combined vitamins K and D supplementation in the prevention of certain diseases [11,26]. Nevertheless, the use of dietary supplements is increasing in many European countries. The fat-soluble vitamins were one of the most frequently consumed ingredients, which accumulate in the body, raising the risks of overdosing and potential negative effects of these supplements [27]. Moreover, in many countries, no dietary supplement databases were available, and labelled values have limitations [27,28].
In the available literature, there are various methods for the analysis of vitamin K, D and its analogues, such as immunoassay [29], spectrophotometry [30], fluorimetry [31], electrochemistry [32], capillary electrophoresis [33], and chromatography. Chromatographic methods are suitable and widely used for the determination of fat-soluble vitamins [29]. Thin-layer chromatography (TLC) has been applied for the determination of vitamin K1 [34], K2 MK-4, K2 MK-7, and K1 [35] and vitamin D3 [36]. In the majority of the studies on vitamins K and D, high-performance liquid chromatography (HPLC) using different types of detection methods has been applied, including electrochemical [37], spectrophotometric, fluorimetric [38,39] or mass spectrometry/tandem mass spectrometry (LC-MS) [40,41,42]. Among the chromatographic methods, gas chromatography (GC) is lesser used in vitamin K and D analysis [43,44]. However, TLC is an important investigative technique for the analysis of lipophilic vitamins and together with densitometry gives sensitive and precise quantification of vitamins K and D compounds on TLC plates [45].
The objective of this work was to develop a simple, fast and sensitive TLC-densitometric procedure for the simultaneous quantitative analysis of vitamins K and D3 in pharmaceutical products and dietary supplements.

Ethanol, methanol, isopropanol, and acetonitrile were purchased either from Merck (Darmstadt, Germany) or POCH (Gliwice, Poland), and all were of analytical grade.

TLC separation was performed on 12.0 × 10 cm aluminum foil-backed TLC silica gel 60 RP-18 F₂₅₄s plates (Merck, Darmstadt, Germany; #1.05559.0001), without pretreatment. Standards (5–8 μL) and sample solutions (5–16 μL) were applied onto the plates as 5-mm bands by Linomat V (CAMAG, Muttenz, Switzerland) semiautomatic sample applicator (150 nL/s dosage speed) equipped with a 100 µL syringe (Hamilton, Bonaduz, Switzerland). The distances on plates were all 10 mm: between tracks; from the edges and from the bottom edge. The plates were developed using mobile phases composed of methanol-ethanol-isopropanol (15:1:4, v/v/v) in a glass chromatographic chamber (17.5 × 16 × 6.2 cm Sigma-Aldrich, Laramie, WY, USA #Z204161). The chamber was previously saturated with mobile phase vapours for only 2 min at room temperature. The development distance was 115 mm. The plates were dried at 25 °C for 15 min. Next, the plates were viewed under a UV cabinet 3 (CAMAG Muttenz, Switzerland) and scanned in absorption–reflection mode at 254 nm with a TLC Scanner 3 (CAMAG Muttenz, Switzerland). The densitometric scanning conditions were as follows: slit dimensions 4.00 × 0.45 mm, scanning speed 20 mm/s and date resolution 100 µm/step. A winCats 1.4.8 version software was used for imaging and saving the chromatograms. The peak areas and absorption spectra of the examined compounds were recorded for quantitative and qualitative analysis.

The newly developed method was validated by checking the specificity, linearity, limit of detection (LOD), limit of quantification (LOQ), precision, accuracy and robustness according to the procedure specified in the International Conference on Harmonization (ICH) guidelines [46].

The specificity of the method was assessed by comparing densitograms obtained for standard solutions and for sample solutions, a densitogram of blank solution and a blank densitogram. In the obtained densitograms, the retardation factor (Rf) values of analyzed compounds, the capacity factor (k), separation factor (α), resolution factor (Rs), and peak areas were taken into account. The capacity factor was calculated according to the equation k = (1 − Rf)/Rf. The separation factor was calculated with the equation α = k1/k2 with k1 ≥ k2; its value should be higher than 1.0. The resolution factor was calculated according to the formula Rs = 2d/(w1 + w2), where d is the distance between two adjacent peaks centers, while w1 and w2 are peak widths at base. The Rs determines the resolution obtained in the developed chromatographic conditions for two neighboring peaks and its value should be not less than 1.

The linearity of the method was assigned by analysis of eight (vitamins K1, K3, K2 MK-4, D3) or six (vitamin K2 MK-7 and MK-9) standard solutions at different concentrations. The concentration range of the standard solutions is given in Section 2.2. The solutions were applied to the plates in an amount of 6 µL as bands, then the plates were developed under the conditions given in Section 2.4 and evaluated densitometrically. The test was performed twice for each substance. The calibration curves were constructed based on the relationship between the registered peak areas and the amount of vitamin in micrograms per band. The linear model was fitted to the calibration data. The slope of regression line, y-intercept, standard deviation of slope and intercept, correlation coefficient (R), determination coefficient (R2), and the standard error of the estimate of the calibration plot were calculated using the program Statistica 13.3 (TIBCO Software, USA). The Shapiro–Wilk test was used, in order to determine whether the residuals have normal distribution.

2.5.3. The Limit of Detection (LOD) and Limit of Quantification (LOQ)

The analysis of six replicates of standard solutions of tested vitamins were used to determine the repeatability of the method. The study was done for 100% concentration level (0.40 µg per band of MK-7, MK-4 and D3; 0.46 µg per band of MK-9; 0.35 µg per band of K1; 0.35 µg per band of K3). The intermediate precision (reproducibility) was obtained for the same concentration of freshly prepared solutions by different analysts who performed the analysis over a period of one week. Peak areas were compared, and data were statistically analyzed. The results were expressed as the percentage of relative standard deviation (%RSD).

Accuracy was assessed by determination of the recovery (%) of the drugs or dietary supplements. Accurately weighed amounts of the vitamin standards (at level 80%, 100% and 120% of the declared content) were added to solutions of tested pharmaceutical products or supplements, and percentage recovery was calculated based on the determined amounts of added standards under the conditions of the developed method in relation to the quantity weighed. As ICH recommends, three determinations were performed for each level.

The robustness of the TLC-densitometric procedure was evaluated by making small, but deliberate, changes to the method parameters. The conditions changed were: the chamber type (17.5 × 16 × 6.2 cm, 17.5 × 16 × 8.2 cm), saturation time of the chamber (±2 min) and the distance of development (±0.5 cm). The influence of small changes of isopropanol in the composition of the mobile phase (±0.2 mL) for chromatographic separation was also studied.

The solutions of tested preparations and dietary supplements were prepared as specified in Section 2.3. The determination of vitamins in tested pharmaceutical products and dietary supplements was carried out according to the procedure outlined in Section 2.4. Five measurements were performed for each determination and the mean value was taken for further calculations.

The newly developed simple, reversed-phase TLC-densitometric method for the simultaneous determination of six vitamins (K1, K2 MK-4, MK-7, MK-9, K3 and D3) was presented. The obtained validation results of the method, both in terms of the quality of chromatographic separation and statistical evaluation, are satisfactory and meet ICH guidelines for methods for quantitative analysis. Therefore, it can be concluded that the developed analytical procedure may be an alternative to other separation techniques, i.e., HPLC or LC-MS, which are more time consuming, labor intensive, and expensive. 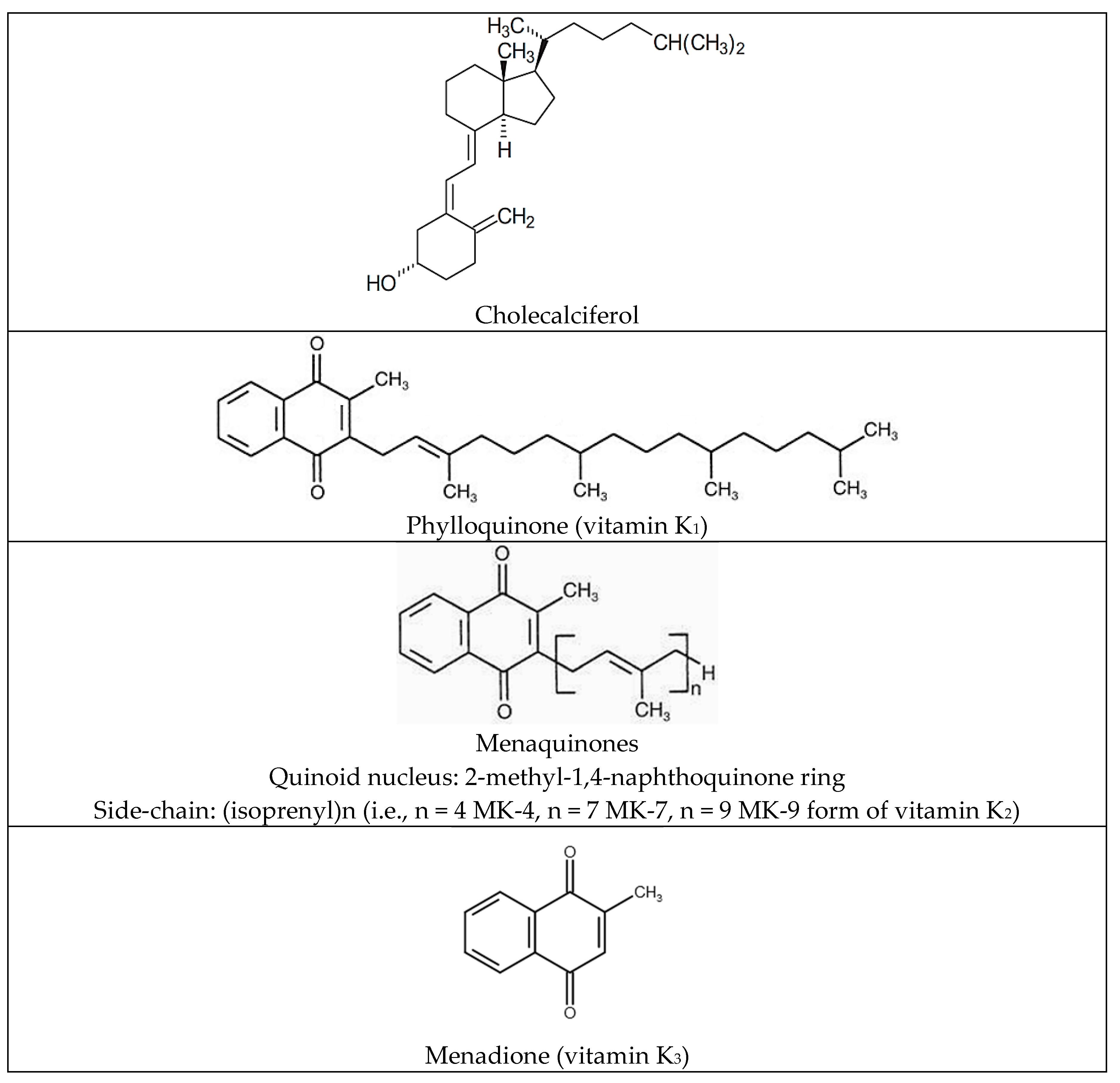 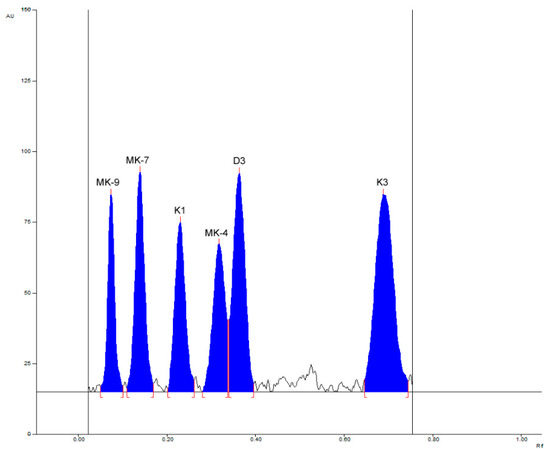 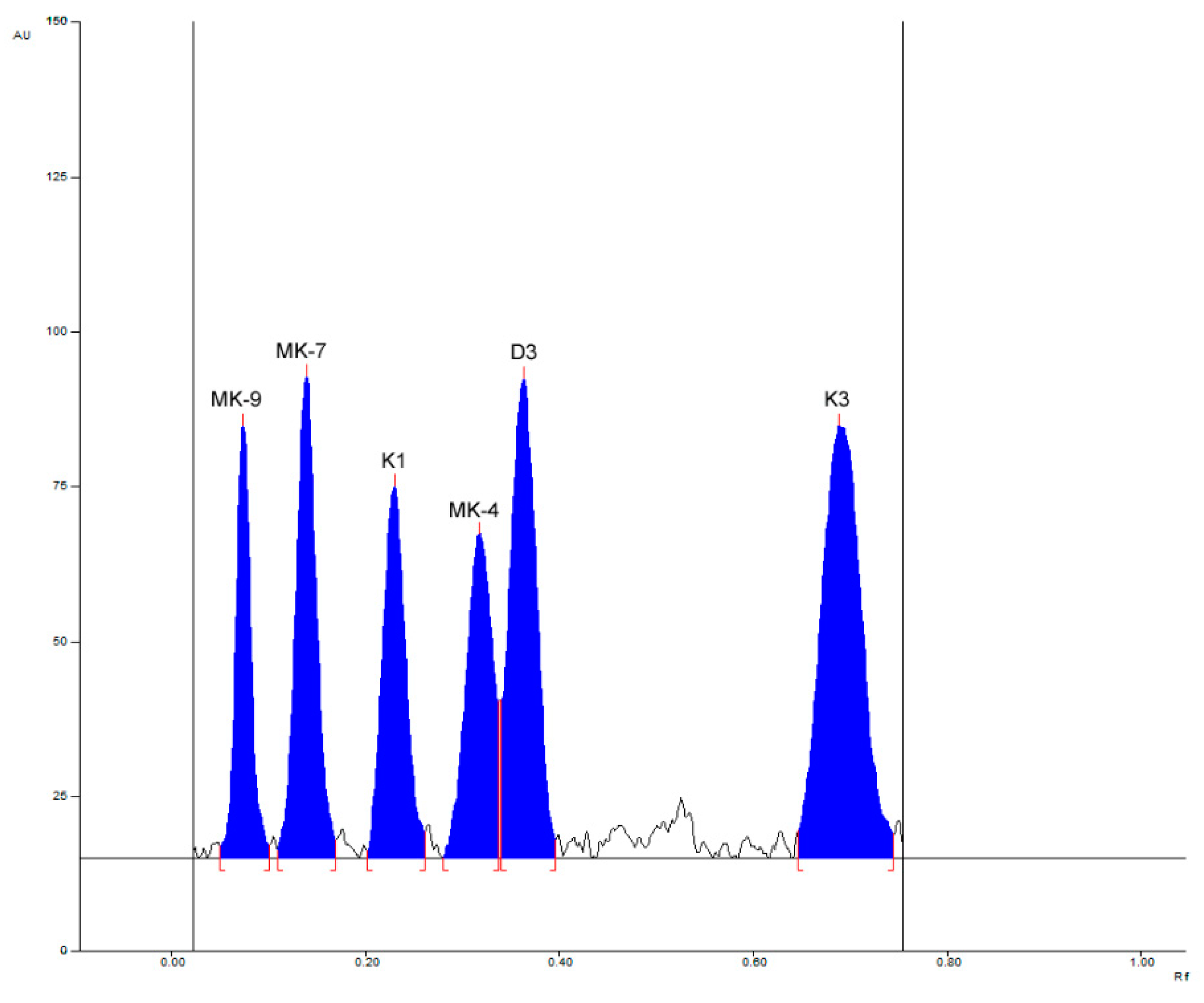 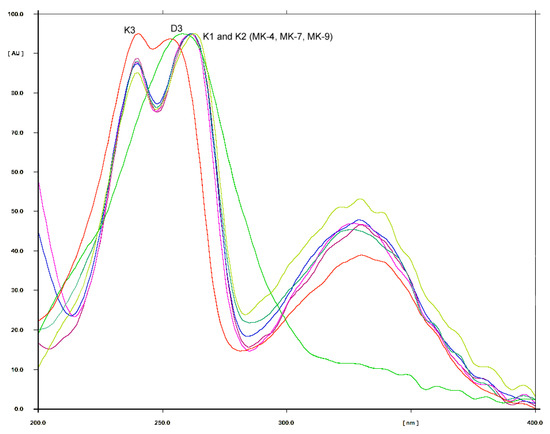