Cellulose nanocrystals (CNCs) are attractive for use in polymer composites, biomedical applications, and barrier packaging. In all of these applications they are mixed with other components and compatibility is a major design consideration, as CNCs naturally have a high density of surface hydroxyl groups and primarily disperse well in polar media. Numerous surface modification approaches have been used to address these issues, but challenges remain due to the variability in the commercially available CNC materials. CNCs can be produced from biomass using several extraction methods, most notably acid hydrolysis and biomass extraction, also known as the American Value Added Pulping process. The production method of the CNC material has an impact on both physical and surface properties of CNCs, including size, shape, crystal structure, and zeta potential. In addition, post-treatments can be used to purify the CNC material and further alter these properties. This work studies the properties of CNCs from three different commercial suppliers and after conducting three different post-treatments: dialysis, Soxhlet extraction, and acetone washing to understand the effect of the commercial source and purification on CNC surface properties and modification via 2,2,6,6-tetramethylpiperidine-1-oxyl radical (TEMPO) mediated oxidation. We show that there is significant variation in CNC physical and surface properties between different commercial suppliers before and after purification. Importantly, we show that for CNCs produced through acid hydrolysis, acetone washing or Soxhlet extraction in ethanol decreases the achievable degree of TEMPO modification, but makes it more consistent between the different commercial suppliers. This has important implications for improving reproducibility in CNC research as well as aiding the expanding fields of applications. View Full-Text
Keywords: cellulose; nanocellulose; surface modification; purification; TEMPO oxidation cellulose; nanocellulose; surface modification; purification; TEMPO oxidation
►▼ Show Figures 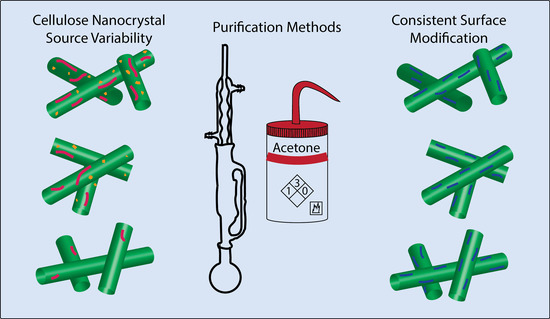