Goldberg’s 100 Unipolar Markers remains one of the most popular ways to measure personality traits, in particular, the Big Five. An important reduction was later preformed by Saucier, using a sub-set of 40 markers. Both assessments are performed by presenting a set of markers, or adjectives, to the subject, requesting him to quantify each marker using a 9-point rating scale. Consequently, the goal of this study is to conduct experiments and propose a shorter alternative where the subject is only required to identify which adjectives describe him the most. Hence, a web platform was developed for data collection, requesting subjects to rate each adjective and select those describing him the most. Based on a Gradient Boosting approach, two distinct Machine Learning architectures were conceived, tuned and evaluated. The first makes use of regressors to provide an exact score of the Big Five while the second uses classifiers to provide a binned output. As input, both receive the one-hot encoded selection of adjectives. Both architectures performed well. The first is able to quantify the Big Five with an approximate error of 5 units of measure, while the second shows a micro-averaged f1-score of 83%. Since all adjectives are used to compute all traits, models are able to harness inter-trait relationships, being possible to further reduce the set of adjectives by removing those that have smaller importance. View Full-Text
Keywords: Machine Learning; personality assessment; gradient boosting; Affective Computing Machine Learning; personality assessment; gradient boosting; Affective Computing
►▼ Show Figures 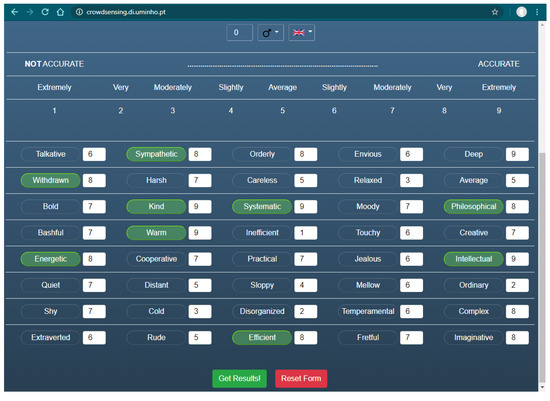