In large scale ships, the most used controllers for the steam/water loop are still the proportional-integral-derivative (PID) controllers. However, the tuning rules for the PID parameters are based on empirical knowledge and the performance for the loops is not satisfying. In order to improve the control performance of the steam/water loop, the application of a recently developed PID autotuning method is studied. Firstly, a ‘forbidden region’ on the Nyquist plane can be obtained based on user-defined performance requirements such as robustness or gain margin and phase margin. Secondly, the dynamic of the system can be obtained with a sine test around the operation point. Finally, the PID controller’s parameters can be obtained by locating the frequency response of the controlled system at the edge of the ‘forbidden region’. To verify the effectiveness of the new PID autotuning method, comparisons are presented with other PID autotuning methods, as well as the model predictive control. The results show the superiority of the new PID autotuning method. View Full-Text
Keywords: steam/water loop; steam power plant; proportional-integral-derivative controller; multi-input and multi-output system steam/water loop; steam power plant; proportional-integral-derivative controller; multi-input and multi-output system
►▼ Show Figures 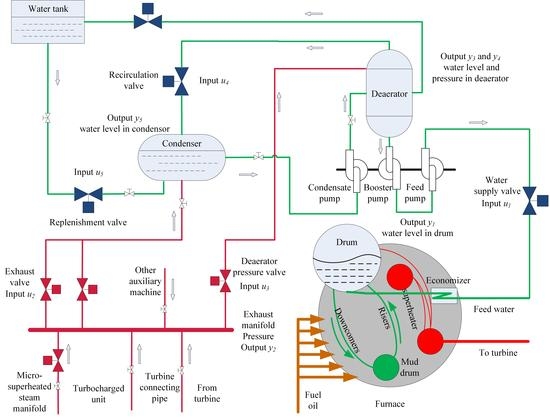