Use of Gasoline, LPG and LPG-HHO Blend in SI Engine: A Comparative Performance for Emission Control and Sustainable Environment

:
Global warming is one of most severe environmental concerns that our planet is facing today. One of its causes is the previous generation of refrigerants that, upon release, remain in the atmosphere for longer periods and contribute towards global warming. This issue could potentially be solved by replacing the previous generation’s high global warming potential (GWP) refrigerants with environmentally friendly refrigerants. This scenario requires an analysis of new refrigerants for a comparison of the thermodynamic properties of the previously used refrigerants. In the present research, a numerical study was conducted to analyze the thermodynamic performance of specifically low GWP hydrofluoroolefens (HFO) refrigerants for an actual vapor compression refrigeration cycle (VCRC) with a constant degree of 3 K superheat. The output parameters included the refrigeration effect, compressor work input, the coefficient of performance (COP), and the volumetric refrigeration capacity (VRC), all of which were calculated by varying the condenser pressure from 6 to 12 bars and vapor pressure from 0.7 to 1.9 bars. Results showed that R1234ze(Z) clearly possessed the desired thermodynamic performance. The drop in refrigeration effect for R1234ze(Z) was merely 14.6% less than that of R134a at a 12 bar condenser pressure; this was minimum drop among candidate refrigerants. The drop in the COP was the minimum for R1234ze(Z)—5.1% less than that of R134a at a 9 bar condenser pressure and 4.7% less than that of R134a at a 1.9 bar evaporator pressure, whereas the COP values of the other refrigerants dropped more drastically at higher condenser pressures. R1234ze(Z) possessed favorable thermodynamic characteristics, with a GWP of 7, and it can serve as an alternative refrigerant for refrigeration systems for a sustainable environment.
Keywords:
alternative refrigerants; global warming potential; vapor compression refrigeration cycle; modeling and simulation of energy systems; HFOs; R134a; R1234ze(Z)

In a VCRC-based system, a refrigerant is initially at evaporator pressure and is fed to compressor, which compresses it to condenser pressure, which is considerably higher than that of evaporator pressure. At this state, a refrigerant has a quite high temperature. This high temperature refrigerant is sent to a condenser to remove the heat of compression; as a result, the state of the refrigerant changes to a high pressure liquid. A filter drier is used to remove the moistness in the refrigerant, and it is allowed to expand. Due to a sudden reduction in pressure, the refrigerant changes into a vapor/liquid mixture. This low pressure vaporized refrigerant is passed into the evaporator and generates a refrigeration effect [47].
The HFO refrigerants that were selected were analyzed by using the software package Engineering Equation Solver EES V.9-644. The input parameters for analysis were condenser pressure, which was varied to 6, 9, and 12 bars, and evaporator pressure was varied to 0.7, 1.3, and 1.9 bars. Compressor size was taken to be 171.26 cm3.
Steady state conditions were assumed, and changes in potential energy, kinetic energy, and pressure drops across all the components of the refrigeration system were so small that their effects were neglected. A compressor with an isentropic efficiency of 0.75 was considered for study [48], and the angular speed of the compressor was taken to be 3000 rpm. A constant degree of superheat and a sub-cooling of 3 K were assumed. The process of expansion in the throttling valve was considered to be isenthalpic [49].
A vapor compression refrigeration cycle with 3 K degrees of superheat/sub-cool is shown in Figure 1, and this cycle was used for this study. The thermodynamic states of the refrigerant are highlighted by state points (1, 2, 3, …, 7).
For this numerical study, four parameters were selected to evaluate the thermodynamic performance of the HFO refrigerants. Mathematical expressions are given for the output parameters. where N is the compressor speed (rpm), Dcomp is the compressor displacement (m3/rev), ρ1 is the density of the refrigerant at the compressor inlet (kg/m3), and ηv is the compressor’s volumetric efficiency.
To determine the variation of the output parameters, Equations (1)–(4) were used. Similarly, to determine the output parameters’ variation compared to those of R134a, e.g., the refrigeration effect, compressor work input, and the COP, Equations (6)–(9) were used for Figure 5b to Figure 12b.

The thermodynamic characteristics of the refrigeration effect and compressor work input of present work were compared using the EES model with the published literature for the validation of the EES model. A study was conducted to analyze the performance of R1234yf as a potential replacement of the R134a refrigerant in which the condensing temperature and superheating degree were varied with and without use of an internal heat exchanger [50].
Two parameters of the present work, i.e., the refrigeration effect and the compressor power input, were compared to previous published work. Figure 2 shows a comparison of the R134a refrigeration effect and the compressor work input of the present study with that of the published literature at an evaporator temperature of 273.1 K, showing that the results of R134a were closer to that of previous work by J. Navarro-Esbri [50]. In the case of R134a, the refrigeration effect minimum error was 2.4% at a 333.1 K condenser temperature, and the maximum error was found to be 14.1% at a 313.1 K condenser temperature, which can be attributed to the thermophysical properties of the refrigerant and the assumptions that were considered for this numerical study.
Similarly, in the case of the compressor, the work input minimum error was 0.6%, as obtained at a 323.1 K condenser temperature, and the maximum error was 15.4% at a 333.1 K condenser temperature; again, these can be attributed to a continuous change in density during compression. From Figure 1, it is clear that errors in the refrigeration effect and compressor power input for R134a were found to be within limits and showed good agreement with already published work. Therefore, this EES model is validated and can be used for further analyses of different refrigerants that are used in this study.

2.5. Comparison of VCRC for HFO refrigerants

3.2. Refrigeration Effect as a Function of Evaporator Pressure

3.5. Effect of Condenser Pressure on Coefficient of Performance (COP)

3.6. Effect of Evaporator Pressure on Coefficient of Performance (COP)

M.F. and A.H. conducted the numerical modelling and analyses, and they drafted the manuscript. M.N. did the correspondence. S.N. and M.U. added the literature section. S.R.N. and M.I. did the proofreading of the article. R.N. and A.R. did the analysis of refrigerants in comparison to the bench marked refrigerants. A.T., A.P., and J.M.A. did the final editing and proof read and helped in preparation of the revised manuscript. All authors have read and agreed to the published version of the manuscript.

There are no conflicts of interest among any author for this manuscript. 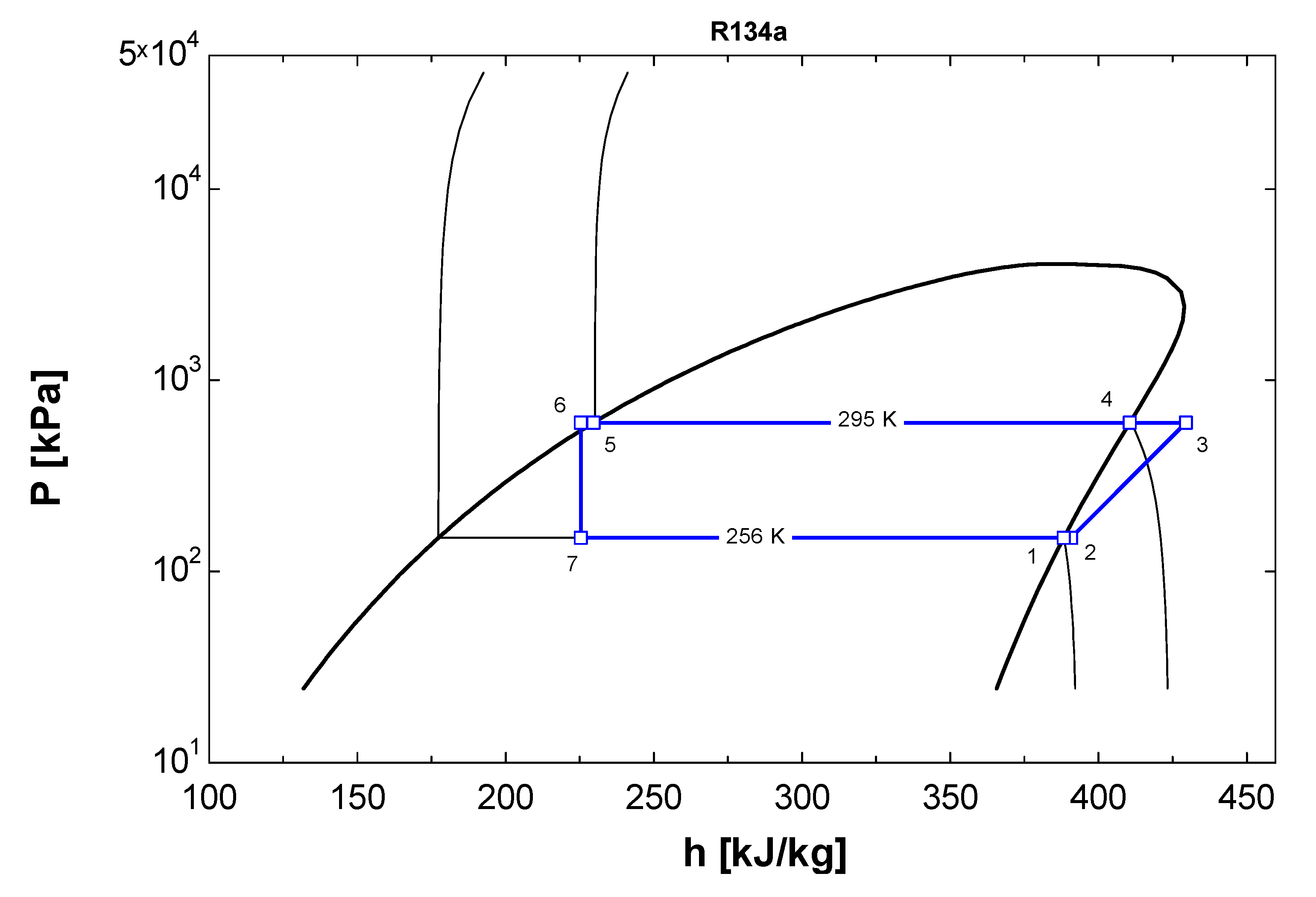 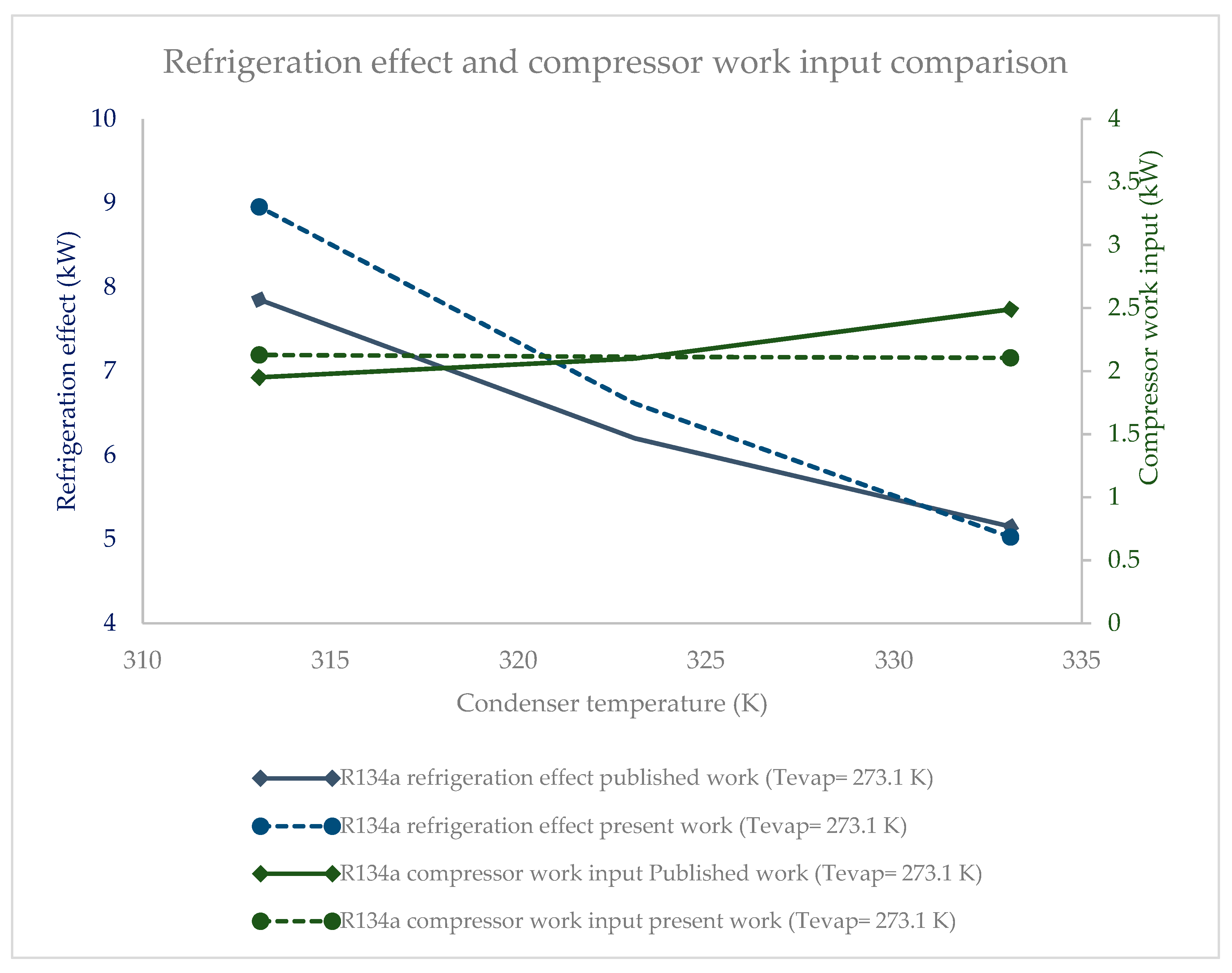 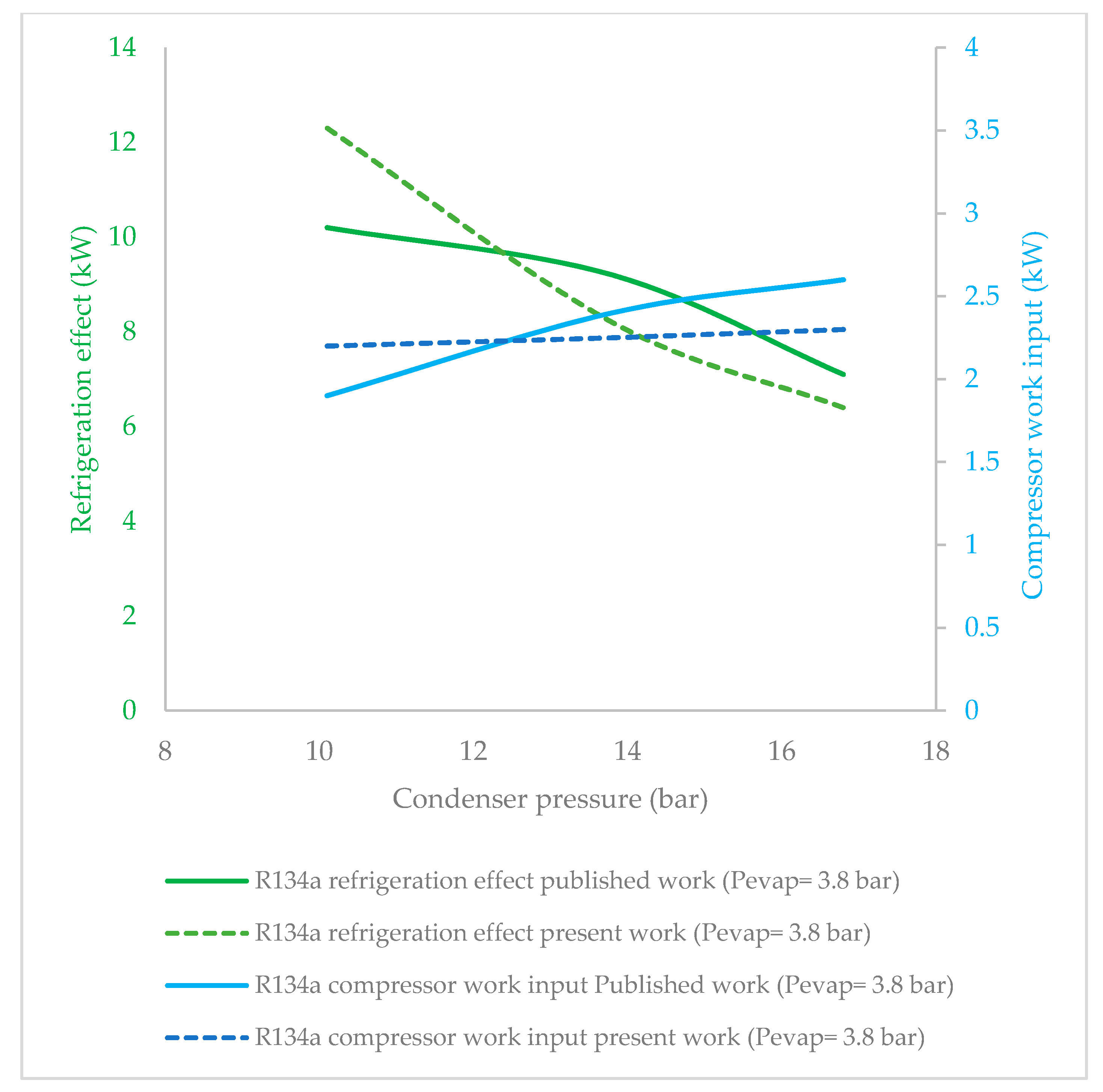 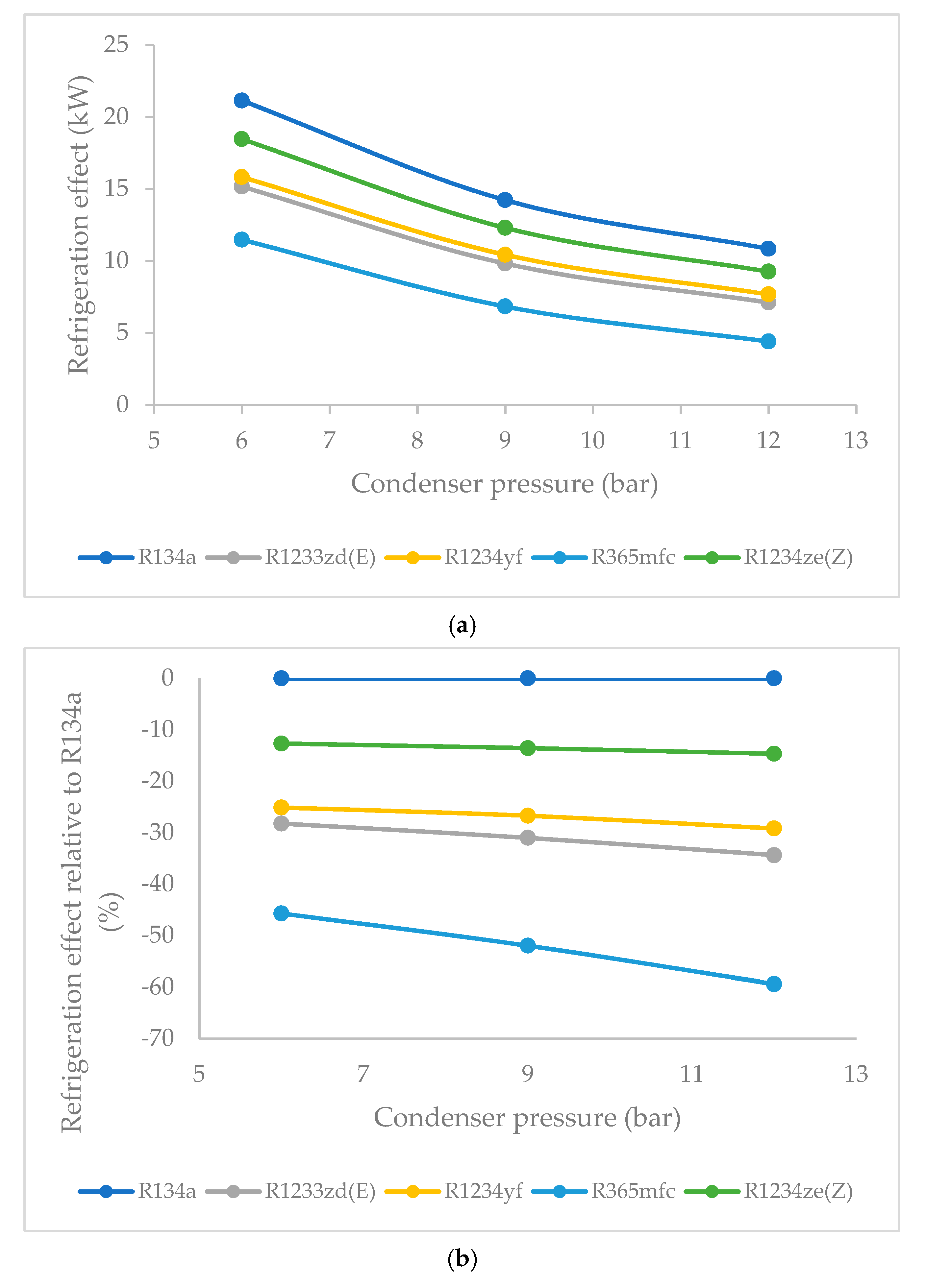 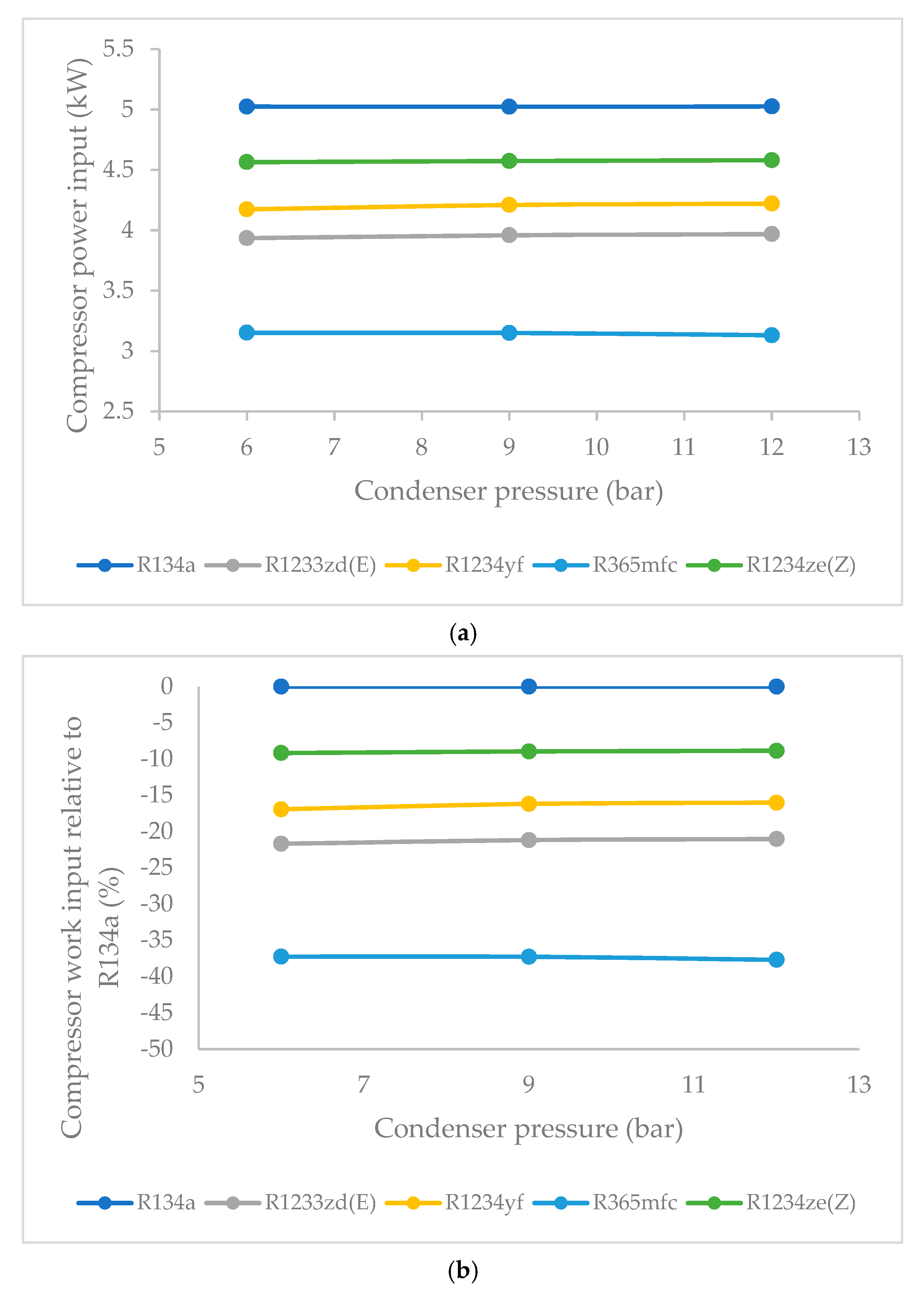 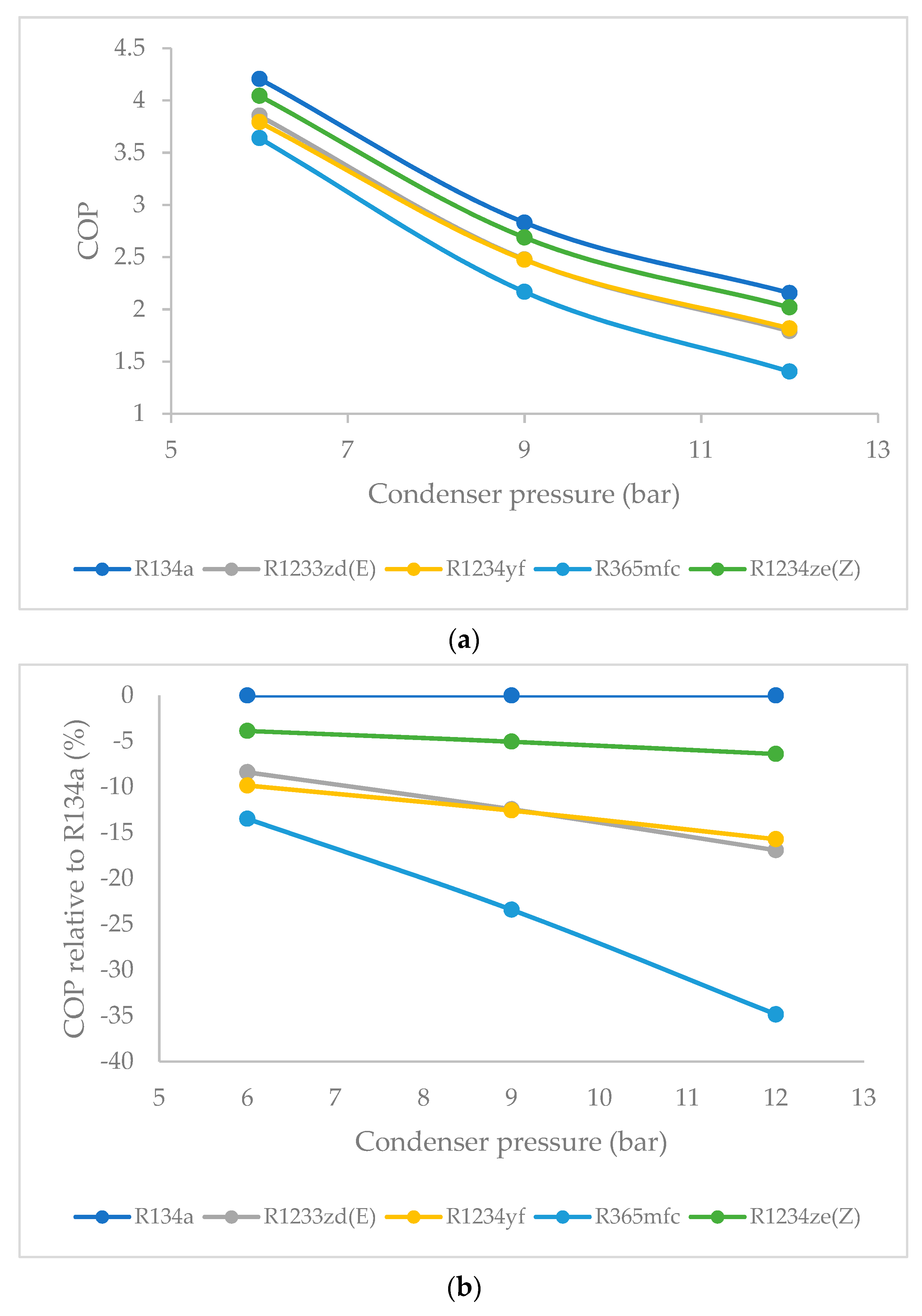 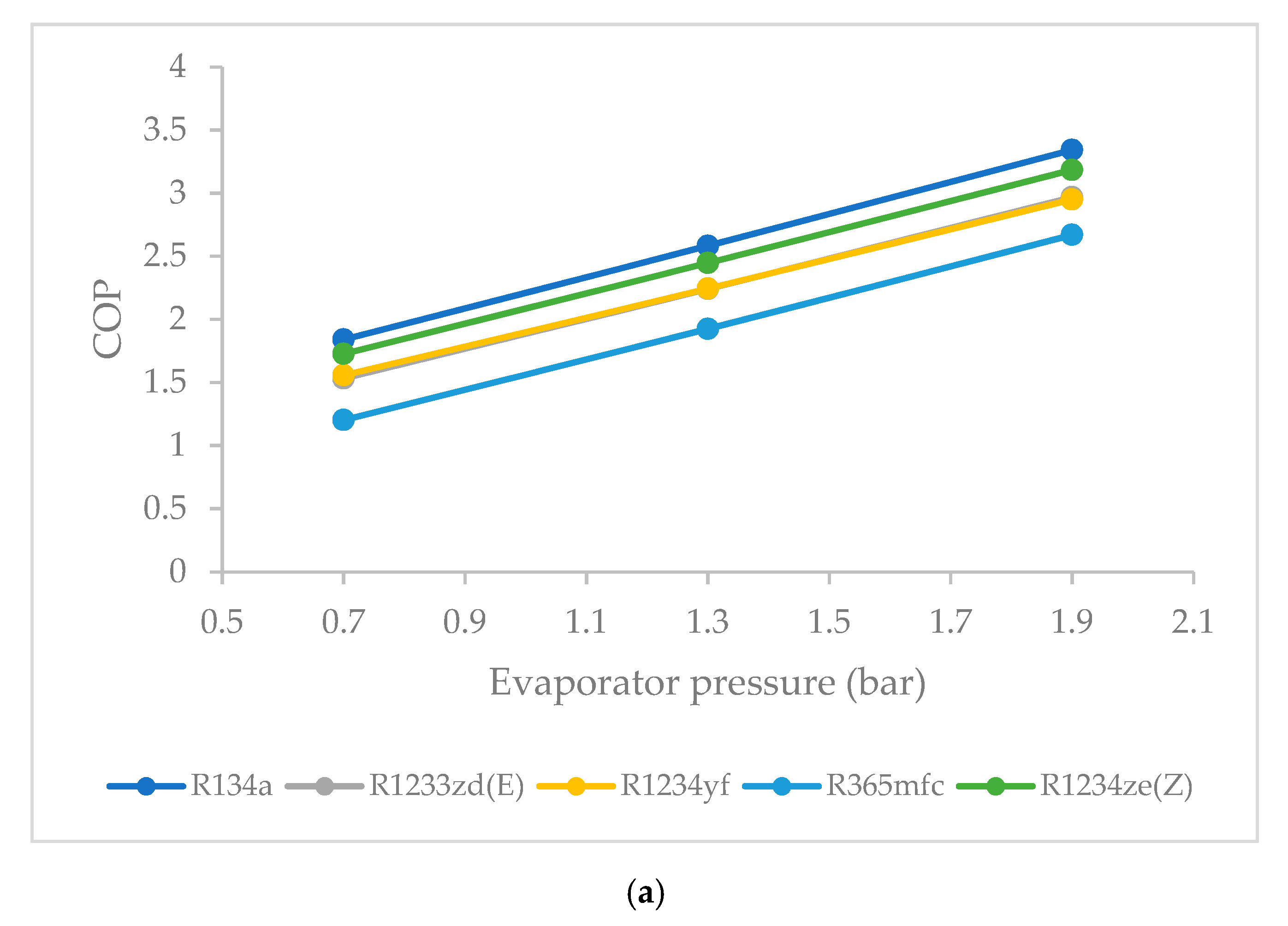