The kinetic model based on the Monte Carlo algorithm is developed according to the probabilities of reactions. Due to the stochastic nature of Monte Carlo simulation, there may always be differences in the results obtained from each run. Hence, defining a proper simulation volume is vital not only because of its impact on the reliability and accuracy of the simulation results, but also due to its influence on the simulation performance and runtime. A larger simulation volume usually renders more accurate results, but it may lead to longer runtimes. The optimum sample size is specific to each polymerization system since it is greatly influenced by the reaction parameters and initial conditions [23,24]. The Monte Carlo computer code utilized in the current work employs Gillespie’s algorithm as its foundation [46]. The concentrations of the species can be related to the number of monomers in the simulation volume according to Equation (1): where is the number of species and represents the concentration of species ; and stand for Avogadro’s number and reaction volume, respectively. In addition, the experimental rate constants () must be converted to Monte Carlo rate constants () according to Equations (2)–(5):
Unimolecular reaction:
Bimolecular reaction between different species:
Bimolecular reaction between identical species:
Termolecular reaction between identical species:
For example, the equation for rate of polymerization, , is: where stands for the Monte Carlo propagation rate constant and and represent the number of (polymerizing) free radicals and monomer molecules, respectively. The probability of each reaction, , is defined by Equation (7): where is the rate of reaction , is the total reaction rate of the system, and denotes the number of reaction channels. Equation 8 is used to determine the reaction channel which should happen at a given time: where is the number of the selected reaction channel and denotes a random number in the (0,1] interval. An additional random number () should also be generated to determine the time interval () between two consecutive and sequential reactions (see Equation (9)):
The improved Mersenne Twister algorithm is embedded in the simulation code to generate random numbers [47]. The simulation code is written in Lazarus 2.0.10 and compiled into 64-bit executable code using FPC 3.2.0. The average runtime of the program is approximately 300 min at a simulation volume of 2.076 × 10–13 lit on a desktop computer equipped with Intel Core i7-3770K (3.50 GHz) and 32 GB of memory (2133 MHz) running Windows 7 Ultimate 64-bit operating system.

Results of the simulation of methyl methacrylate (MMA) free radical polymerization in solution (Case 3 of Table 1 and Table 2) are presented in Table 5 and Figure 5. The simulation captures the fact that the MWDs for MMA polymerization are broader compared with styrene (contrast the values of dispersity in Table 4 and Table 5, respectively).
According to the simulation results, increasing the number of shots (NOS) from 1 to 8 (first column of plots in Figure 5, from top to bottom) causes a 75% increase in weight-average molecular weight and a 65% increase in dispersity. The wider distributions (exhibiting a shoulder at high molecular weights) previously observed with the AOS-3 and TOS-3 policies (in Figure 4) are also present in MMA polymerization. Here, by changing the initiator feeding policy from NOS-1 to AOS-1, both weight-average molecular weight and dispersity are increased by a factor of 2. Additionally, the AOS-2 and AOS-4 policies provide a narrower MWD due to the higher fraction of initiator at lower conversions and the lower fraction of initiator at higher conversions. Within these policies, the molecular weight distribution is closer to the reference graph (NOS-1), and the time to achieve complete conversion is reduced. In NOS-4, AOS-1, and TOS-3 feeding policies, due to the higher fraction of initiator concentration at high conversions, a larger amount of initiator remains unreacted in comparison with the other policies. Therefore, the number of decomposed initiator molecules (produced chains) falls, thereby raising molecular weight and widening molecular weight distribution compared with the other policies. Overall, the later the initiator is introduced to the reaction system, the more heterogeneous the microstructure of the produced chains becomes. In fact, a lower fraction of initiator at the beginning of the polymerization generates fewer, but longer chains, thereby broadening chain length distribution, as one can observe from Table 5 and Figure 5.
Finally, in order to ‘benchmark’ the simulation algorithm and coding developed herein, simulation data for MMA polymerization at four different temperatures were compared with ASPEN modeling data reported elsewhere [48], noting that the ASPEN modeling was already confirmed using experimental data [37]. As can be seen in Figure 6, the conversion-time results for NOS-1 are in complete agreement with the ASPEN data at all temperatures. Furthermore, as expected, raising the temperature increases the rate of monomer consumption.

A.S., M.N. and Y.M. conceived the original idea (with discussions with G.T.R. and A.P.), designed and executed the computer programming, performed the simulations, analyzed the data, and wrote the original draft of the paper; G.R.T., A.P. and E.V.-L. read and corrected different versions of the manuscript, and provided extra references and discussion points.All authors have read and agreed to the published version of the manuscript. 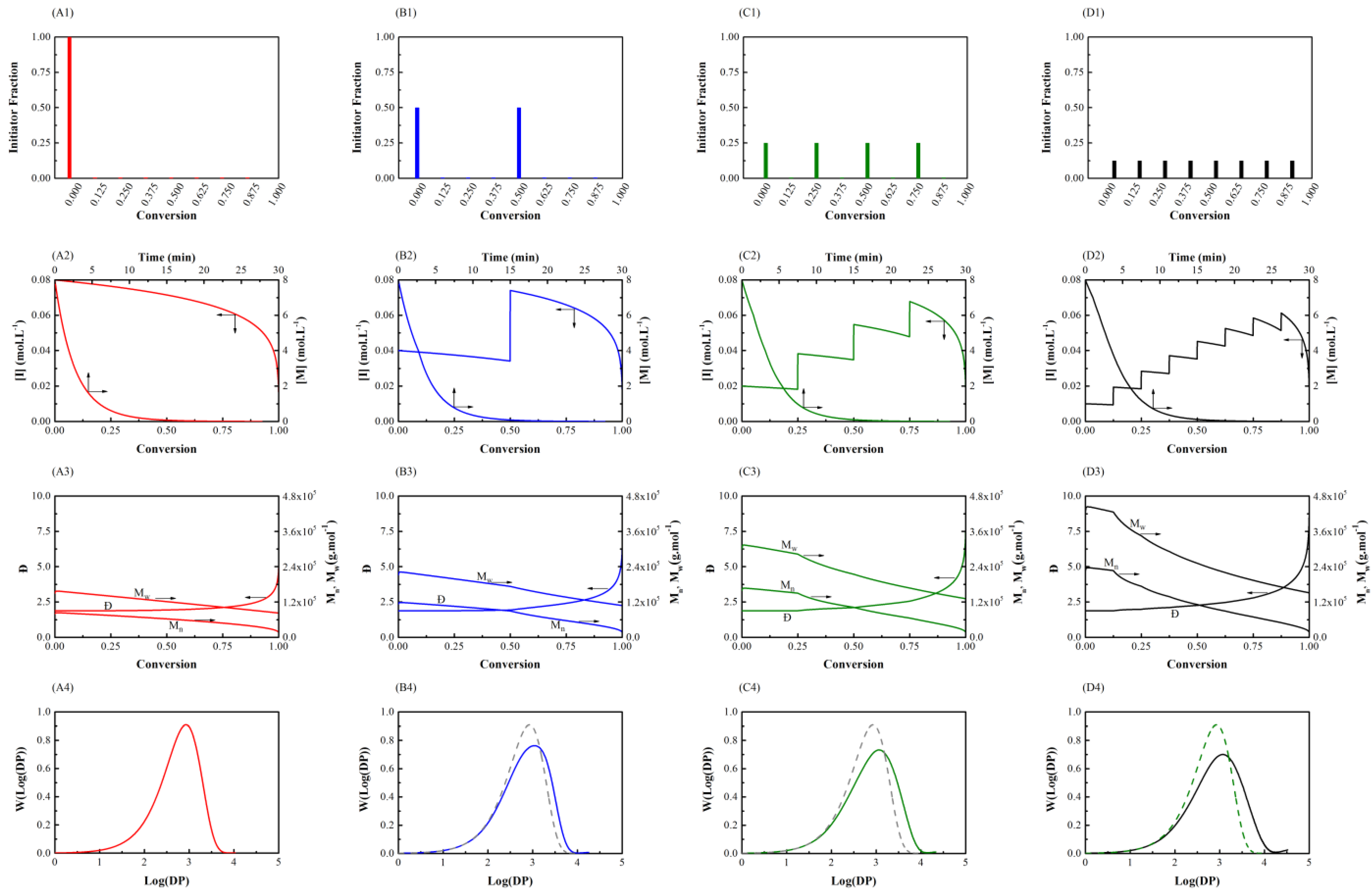 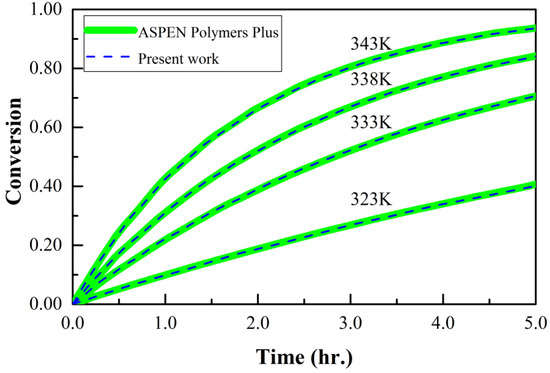