Influence of Carbon Nanosheets on the Behavior of 1,2-Dipalmitoyl-sn-glycerol-3-phosphocholine Langmuir Monolayers
Previous Article in Journal

Oil sample. A crude oil was diluted by diesel to obtain a viscosity of 70 mPa·s at 65 ℃.
Brine. The composition of both formation brine and injection brine used in our experiments is listed in Table 1.
Polymer. An associative polymer (AP-P4) was purchased from Guangya Company, Sichuan, China. The polymer solution with a concentration of 1750 mg/L has an apparent viscosity of 18 mPa·s after being pre-sheared by a Waring Blender (3500 rpm for 20 s). For more information, refer to Li et al. [22] and Guo et al. [23].
Core samples. Three types of sandstone core samples were made in our lab using quartz sand with different particle sizes. More detailed descriptions are as follows:

(1)
Homogeneous cores. The dimensions are 25 mm in diameter and 500 mm in length. Gas permeability is 2500 mD. Water permeability is 810 mD.
(2)
Three-layered heterogeneous cores. The dimensions are 45 mm in width, 45 mm in height, and 300 mm in length. The permeabilities of three layers from top to bottom are 5000/2000/500 mD, respectively.
(3)
Electrode-bearing core. This type of core is used to measure the remaining oil distribution. A schematic and a picture of the core sample setup are shown in Figure 1. Copper electrodes were installed along the core samples, at an interval of 3.3 cm.

Micromodels. Three layered heterogenous micromodels (as shown in Figure 2, left and middle) were prepared by etching on ultra-white polished glass sheets (30 × 30 × 2.1 mm, made in China) [24]. The average pore diameters of the high, medium, and low permeability zones are approximately 104, 64, and 21 μm, respectively. The micromodel holder is shown in Figure 2, right.

All experiments were conducted at 65 °C unless otherwise specified.

The experimental procedures to conduct the macroscopic oil displacement test are as follows:

(1)
Measure the gas permeability.
(2)
Vacuum saturate the core sample with brine in Table 1 and calculate the porosity according to the weight difference.
(3)
Measure the water permeability by injecting brine at different flow rates.
(4)
Inject oil at successive flow rates of 0.1, 0.2, 0.5, and 1.0 mL/min, to displace water until no more water is produced. Age the core at 65 °C for 72 h.
(5)
Polymer solution (0.3 PV) is injected at 1.0 mL/min, at different water saturations.
(6)
A post-waterflooding is carried out at a flow rate of 1.0 mL/min till the instantaneous water cut reaches 95%. Throughout the displacement test, a 10 mL glass tube is used to collect the effluent every 5 min.

(1)
Setup the microfluidic system and check its leakage. Then fill the micromodel with brine.
(2)
Inject oil at a rate of 0.001 mL/min.
(3)
Then inject brine at 0.001 mL/min and the whole process is recorded by using a computer and a camera.
(4)
Inject polymer solution at 0.001 mL/min for 0.3 PV.
(5)
A post-waterflooding is conducted at 0.001 mL/min until water cut reaches 95%.
(6)
Data processing: the oil saturation change in each pore of the micromodel is calculated according to the pixel value which is processed by Photoshop and Image J.

In order to further investigate the rational under which polymer injection timing affects the oil recovery, a series of microfluidic experiments were performed.

3.2.1. Comparison of Waterflooding with Polymer Flooding at Secondary Mode before Water Breakthrough

Firstly, two microfluidic experiments were conducted at secondary modes: one was waterflooding, the other was polymer flooding. Both experiments ceased at water breakthrough and the snapshots at the final moment are shown in Figure 6. One can see that for both cases, water and polymer flew through the high permeability zone mostly. Only a small amount of fluids entered the medium and low permeability zones close to the entrance. The oil recovery for waterflooding and polymer flooding before water breakthrough were 9.3% and 14.2%, respectively. This relatively small difference in oil recovery indicates that there is no need to inject polymer too early before water breakthrough, since water also works as an effective displacing agent before breakthrough.

The results of macro and micro laboratory experiments demonstrated that injecting a specific amount of water was conducive to subsequent polymer flooding. It could save the cost of polymer and help maintain the polymer solution’s effective concentration. Thereby, the optimum injection timing was close to the water breakthrough.
The waterflood front, calculated by the Buckley–Leverett method, has been used to characterize waterflooding [25,26]. The position of waterflood front is described by Equation (1). Additionally, the water saturation at the front is calculated by Equation (2) as follows: where is the waterflood front position (cm); is the initial position (cm); is the water cut at waterflood (%); is the water saturation at waterflooding front (%); is the irreducible water saturation (%); Q(t) is the flow rate (cm3/min) at time t.
For our homogeneous core sample, the oil-water relative permeability curve and the derived fraction flow results are displayed in Figure 9. Other parameters used in our calculation include the porosity of 30%, water injection rate of 1.0 mL/min, the cross-section area of 20.25 cm2. The other calculated parameter values are tabulated in Table 4. One can see that at time 14–15 min, water is going to break through soon. Correspondingly, the injected water is between 0.1901 and 0.2037 PV, which is close to our experimental result—0.203 PV. This verifies that the Buckley–Leverett method is valid to determine the water breakthrough time or polymer injection timing. 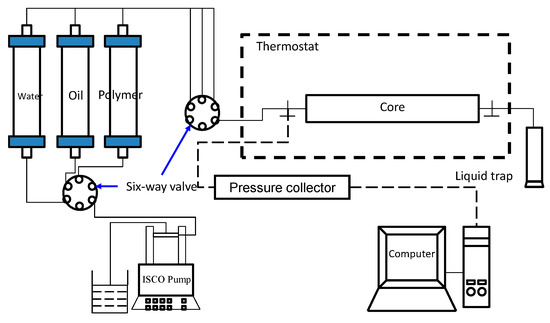 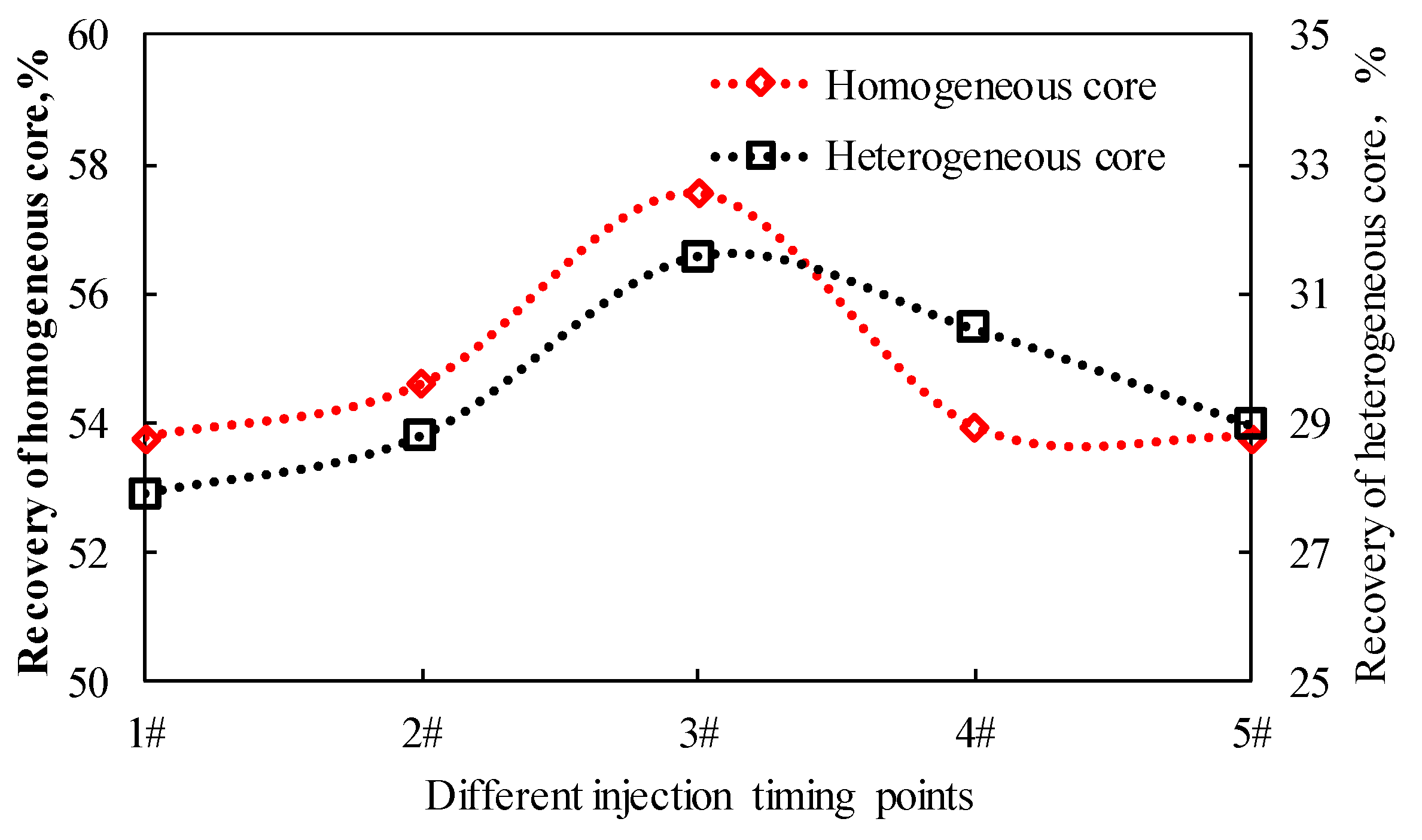 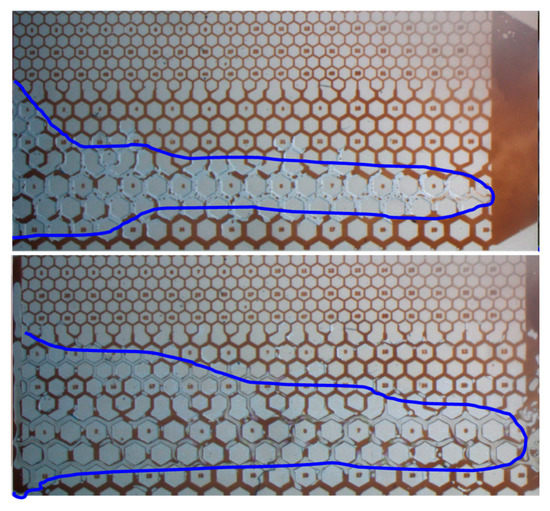 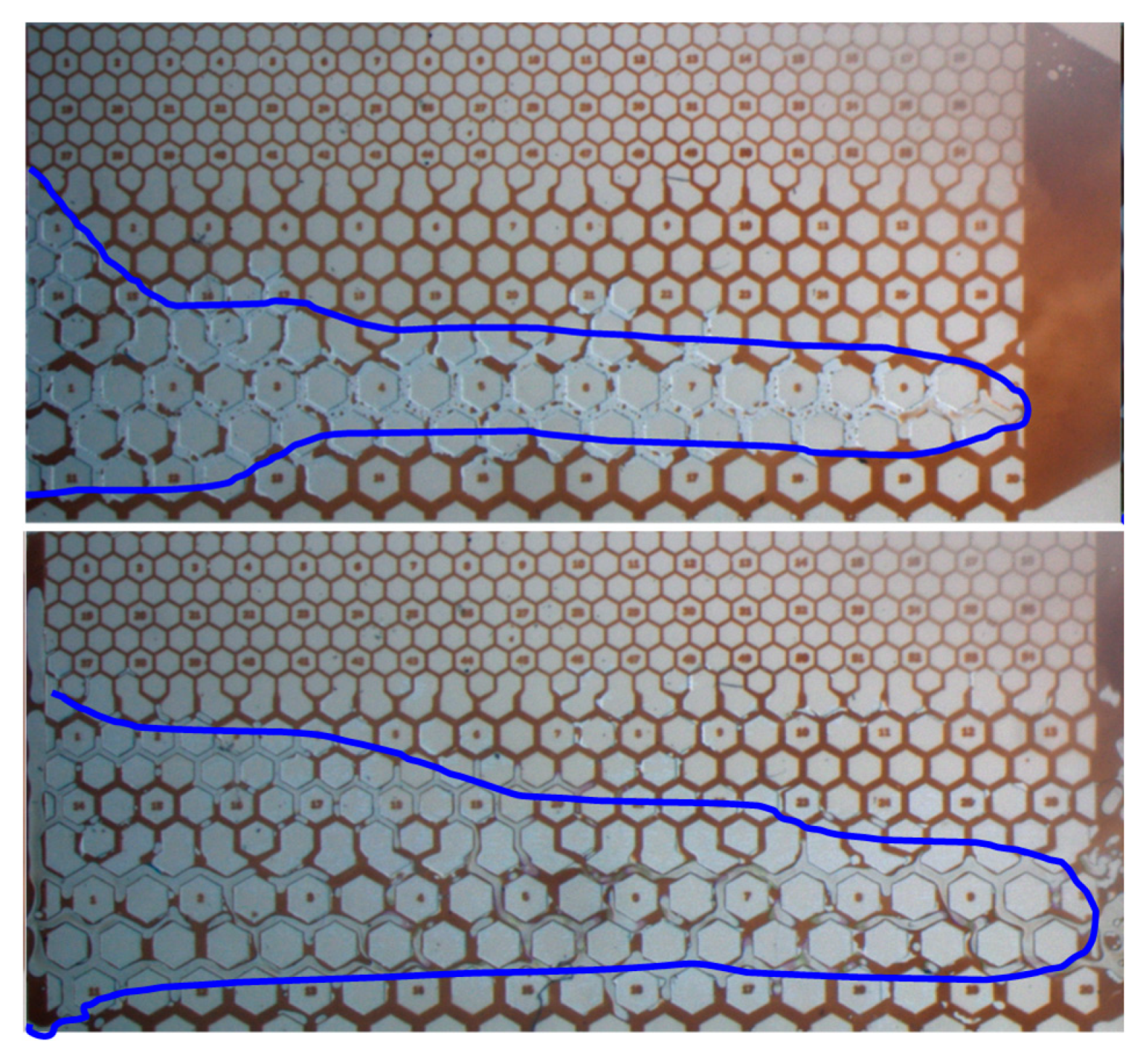 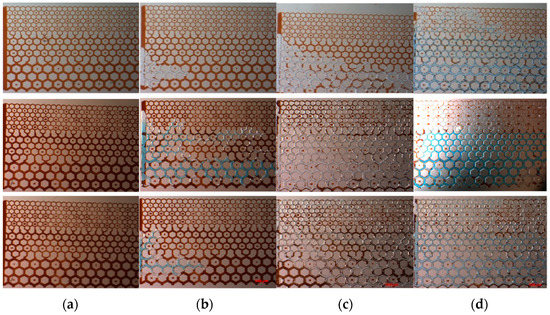 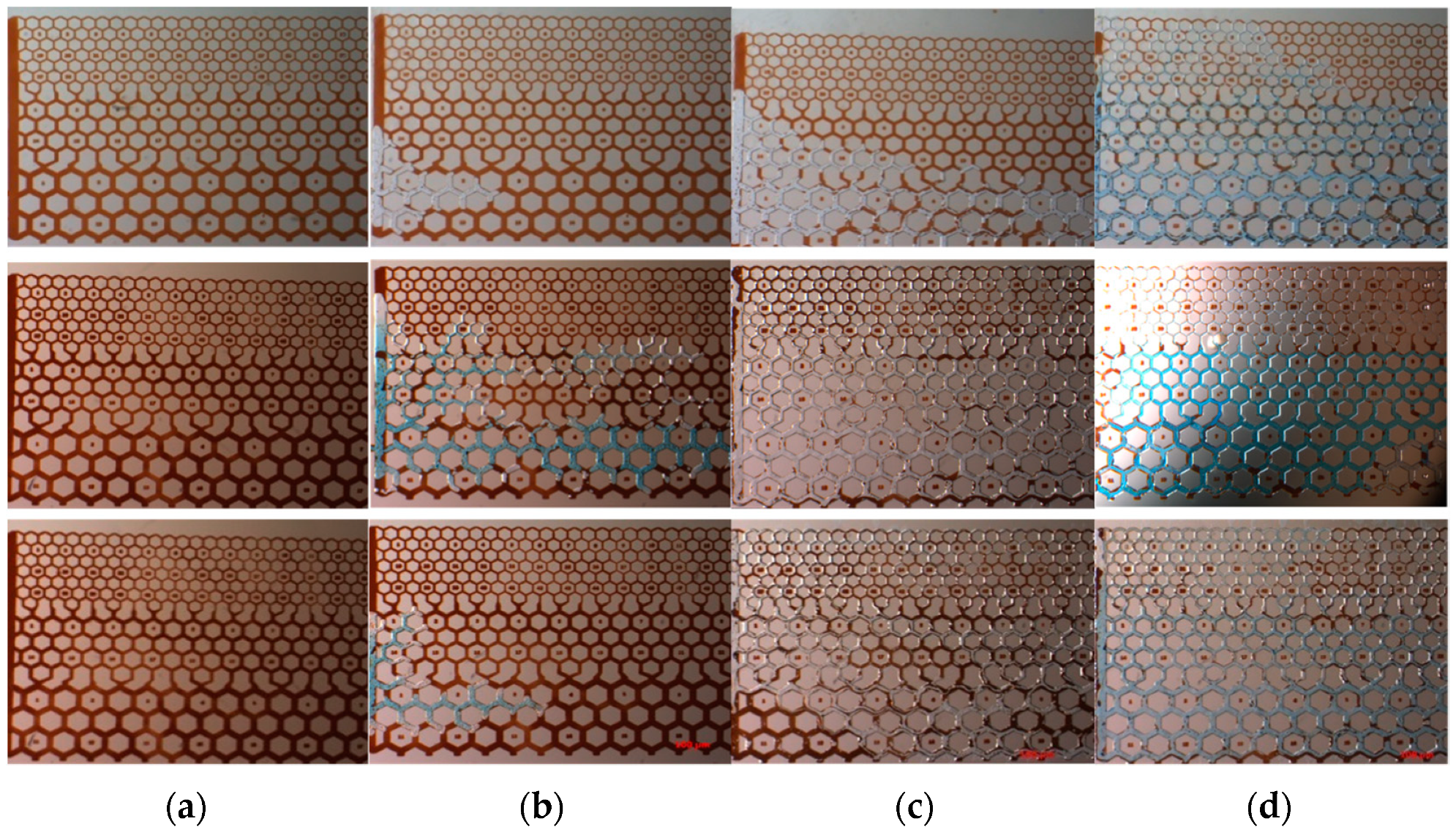 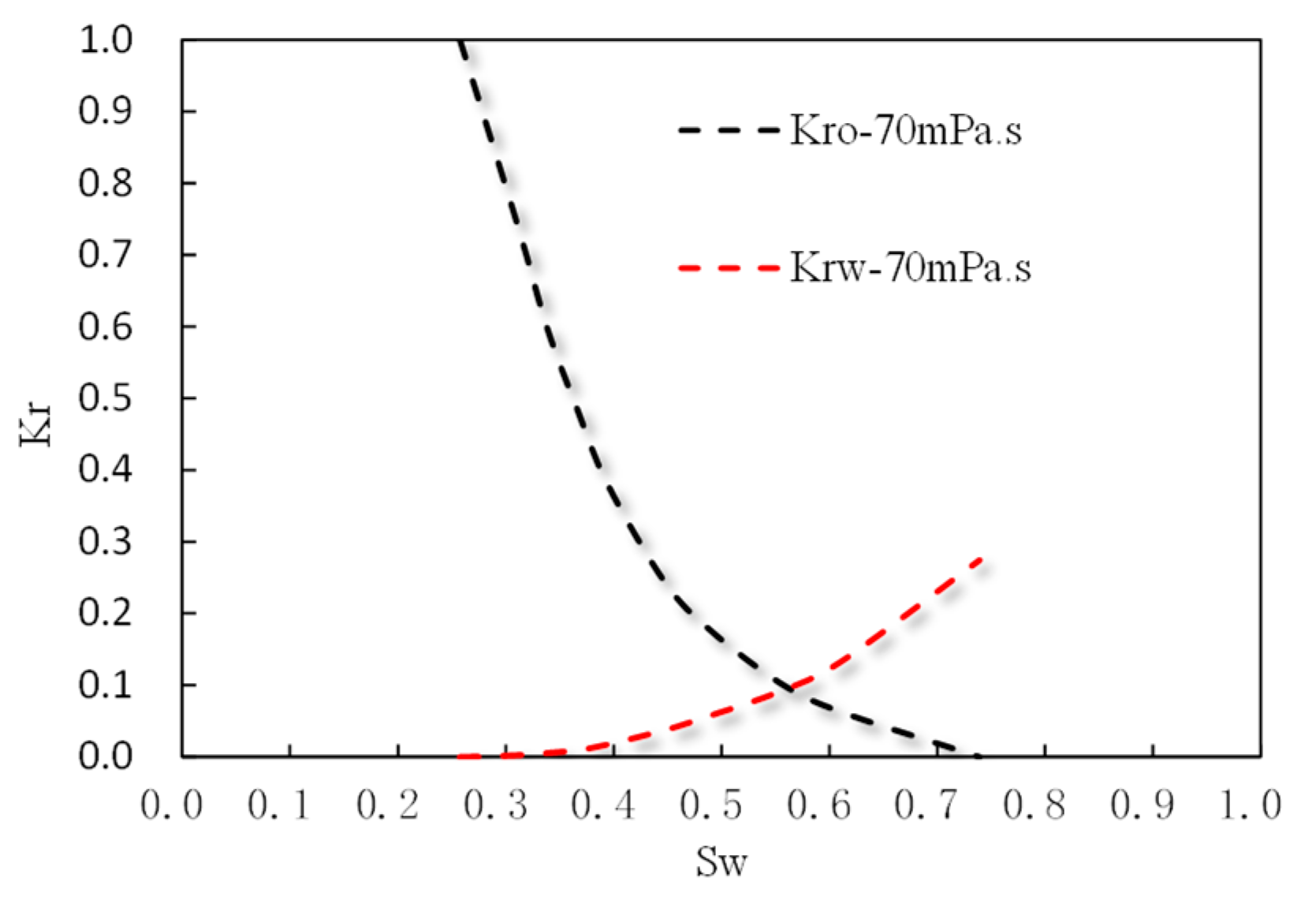 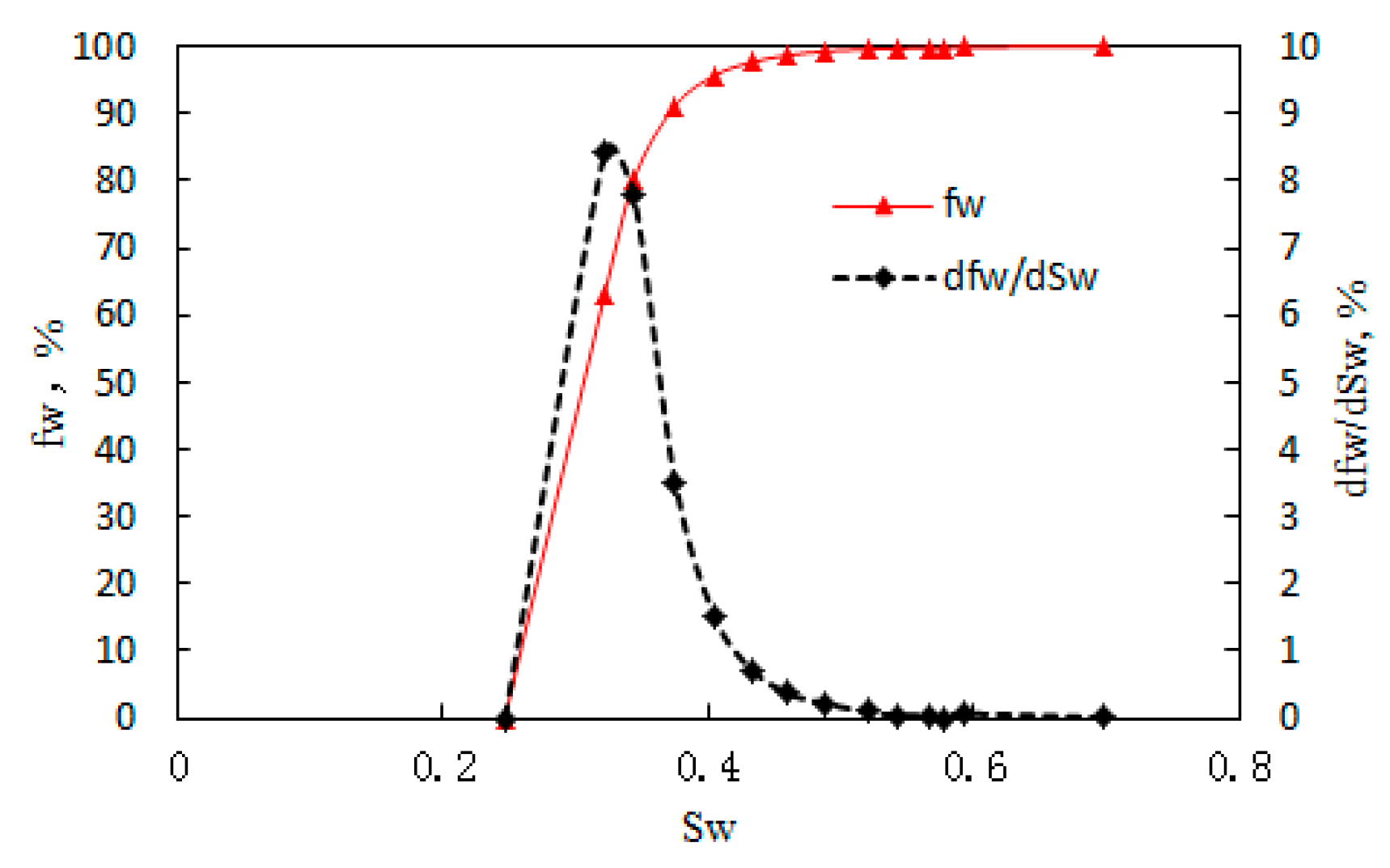 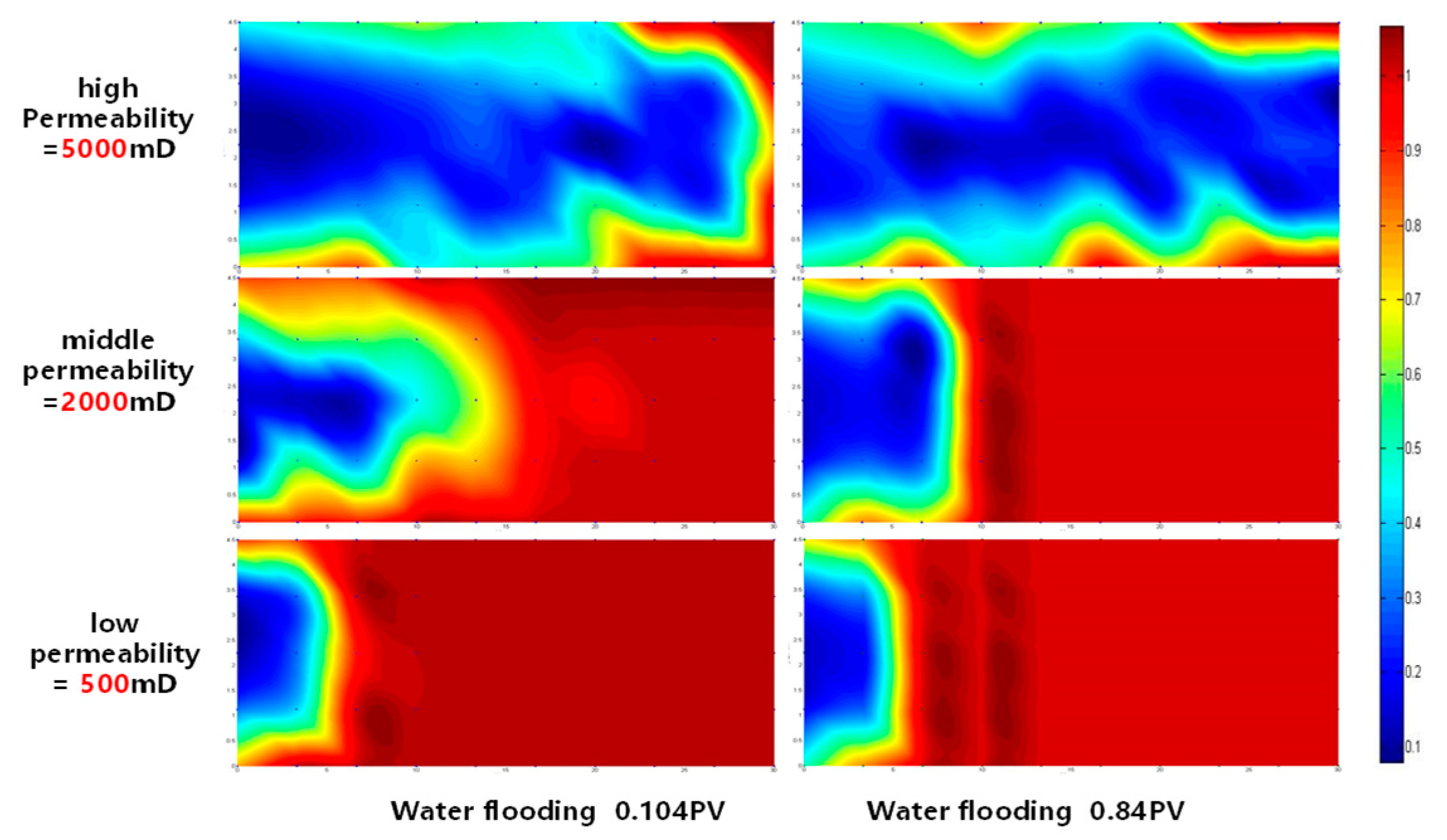 Table 4. Related calculation of the homogeneous core.
Table 4. Related calculation of the homogeneous core.
© 2020 by the authors. Licensee MDPI, Basel, Switzerland. This article is an open access article distributed under the terms and conditions of the Creative Commons Attribution (CC BY) license (http://creativecommons.org/licenses/by/4.0/).
We use cookies on our website to ensure you get the best experience. Read more about our cookies here.
Accept
We have just recently launched a new version of our website. Help us to further improve by taking part in this short 5 minute survey here. here.
Never show this again