Chromium (as Cr(VI)) and fluoride (F−) are frequently found in effluents from different industrial activities. In cases where these effluents reach soil, it can play an important role in retaining those pollutants. Similarly, different byproducts could act as bio-adsorbents to directly treat polluted waters or to enhance the purging potential of soil. In this work, we used batch-type experiments to study competitive Cr(VI) and F− adsorption in two different soils and several kinds of byproducts. Both soils, as well as mussel shell, oak ash, and hemp waste showed higher adsorption for F−, while pyritic material, pine bark, and sawdust had a higher affinity for Cr(VI). Considering the binary competitive system, a clear competition between both elements in anionic form is shown, with decreases in adsorption of up to 90% for Cr(VI), and of up to 30% for F−. Adsorption results showed better fitting to Freundlich’s than to Langmuir’s model. None of the individual soils or byproducts were able to adsorbing high percentages of both pollutants simultaneously, but it could be highly improved by adding pine bark to increase Cr(VI) adsorption in soils, thus drastically reducing the risks of pollution and deleterious effects on the environment and on public health. View Full-Text
Keywords: adsorption; chromium; competition; fluoride; soil and water pollution adsorption; chromium; competition; fluoride; soil and water pollution
►▼ Show Figures 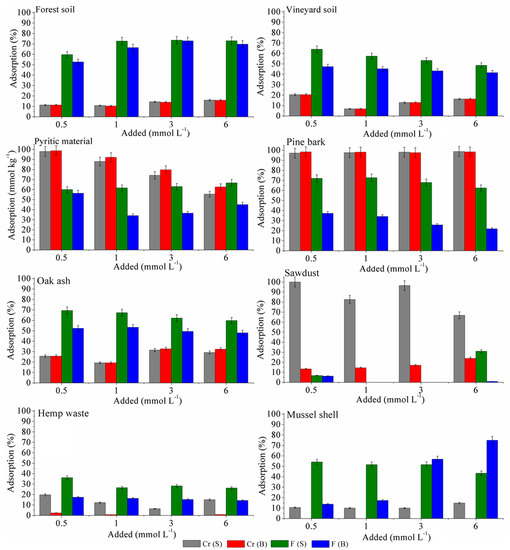