The BabySaver: Design of a New Device for Neonatal Resuscitation at Birth with Intact Placental Circulation

Cardiopulmonary exercise testing (CPET) provides a thorough assessment of pulmonary, cardiovascular, and muscular systems, helping to distinguish the system most responsible for exercise intolerance. In respiratory disorders, CPET can help recognize the pathophysiology that can lead to exercise intolerance, assess therapeutic interventions, and provide key data on prognosis [1].
In cystic fibrosis (CF), the prognostic value of CPET was firstly described in 1992 by the landmark paper of Nixon et al. [2], where VO2peak was found to be a significant predictor of mortality in CF. Since then, various studies have confirmed the prognostic role of VO2peak, respiratory equivalent for oxygen at peak exercise (VE/VO2), and other parameters [3,4,5,6] in CF. In accordance with others with these findings, CPET is advised to be part of the annual routine CF evaluation [7].
Hence, overall survival in CF has increased dramatically since 1992 [8], and interest has shifted toward recognizing potential predictors of pulmonary exacerbations in order to prevent worsening in patients’ clinical condition [9].
A pulmonary exacerbation (PEx) in CF is preceded by various physiological alterations that, in many cases, are clinically obvious even more than one month before the worsening of symptoms [10]. As clinical symptoms can become apparent so early, it is reasonable that pathophysiological remodeling along with a higher possibility for a mild gas exchange impairment [11] could be present even earlier. On that basis, possible alterations in CPET indexes such as VO2peak, VE/VO2, VE/VCO2, and others that serve as markers of elevated effort to absorb oxygen could hint at underlying mechanisms responsible for an upcoming PEx.
Therefore, our study’s primary aim was to examine the relationship between CPET-derived parameters and the future occurrence of pulmonary exacerbations in CF.

This was a mixed retrospective and prospective study. A total of 78 patients (aged >9 years old) followed by our CF Unit performed full cardiopulmonary tests one to three times per year, during a 10-year period (2009–2019). Patients that were started on CFTR modulator were not included in the analysis, as this could have biased our results. A pulmonary CF exacerbation was defined as the need for additional treatment when the following occurred: (i) alteration in color or quantity of sputum, (ii) increase in cough, (iii) anorexia or malaise, (iv) decrease in pulmonary function by more than >10% (v) shortness of breath, or (vi) alteration in radiographic findings [12]. In total, 265 cardiopulmonary exercise tests were performed in a 10-year period. Of these, 248 fulfilled the criteria of a maximal test. The study was approved by the respective ethics committee, and written informed consent was obtained from all patients (IRB File No.:3/2-5-2018).

We performed a survival analysis through Cox Regression. Pulmonary exacerbation was considered an event, and survival time was measured from the first visit of the patient. All CPET indices were used as the relevant percentages of the predicted values.
Various combinations of CPET and other variables such as sputum culture, age, and spirometry measurements were tested via multivariate cox models.
All analyses were performed with statistical packages SPSS (IBM SPSS v22) and R (https://www.r-project.org/, date accessed on 12 June 2021) v3.5.2.
CPET variables’ relationship with exacerbations was visualized with Cox proportional hazard plot for the three groups of patients with VO2peak≤ 60% predicted; 60% < VO2peak% predicted ≤ 80%; and VO2peak% predicted >80%.

Data from a 10-year follow up with CPET and spirometry of CF patients were used to perform our analyses. Baseline characteristics of patients included are shown on Table 1. Pulmonary exacerbations were recorded according to the above definition [12], and Cox proportional hazard models were applied.

The main finding of this study is that Cardio-Pulmonary Exercise Testing can predict pulmonary exacerbations in patients with CF. To our knowledge, this is the first time this has been reported in the literature.
In recent years, CPET has gained increased interest among researchers in the field of respiratory disorders, especially cystic fibrosis. Since Nixon et al. first reported that CPET could predict mortality, many researchers have focused on confirming this finding [2]. Hebestreit et al. conducted multicenter research to examine whether CPET could predict mortality or lung transplant in a 10-year period [16]. The researchers found not only VO2peak but also ventilatory inefficiency indexes VE/VO2 and VE/VCO2 to be strong predictors of upcoming mortality. Another study employing univariate models recognized VE/VO2peak [3] as an indicator of mortality in adults.
Extending this concept, one could deduct that as these indices can predict mortality they could probably be also used as indicators for the events that lead to death in these patients’ pulmonary exacerbations. VE/VO2peak and VE/VCO2peak have been found to reflect structural lung damages, as noted on high-resolution computed tomography (HRCT) [17], and to be indicators of ventilatory inefficiency [18]. Chronic lung inflammation and remodeling are part of the mechanisms that lead to increased mortality in CF [19]. As airway inflammation and remodeling have progressed, ventilation inhomogeneity and ventilation inefficiency have become established [20]. This parallel progression can imply that both inflammation and ventilatory inefficiency might be related. Hebestreit el al. recognized VE/VO2 and VE/VCO2—the main ventilatory efficiency indexes—as prognostic factors for mortality [16].
In our study, and after multivariate analysis and adjustment, we recognized VE/VO2 along with PetCO2 and VO2peak as predictors of pulmonary exacerbation (PEx) in patients with CF. Moorcroft et al. recognized VE/VO2peak as a strong predictor of mortality in adult patients with CF [3], and it was also found to be a strong mortality predictor in children [5]. This prognostic importance of the ventilation efficiency index is strengthened in our study as it is found to be indicative not only of death but of the preceding pulmonary exacerbations that increase the disease burden in CF and eventually lead to death. Along with VE/VO2, end-tidal CO2 exhalation and VO2peak were found to be significant predictors of pulmonary exacerbations in CF, highlighting the role of CPET in monitoring disease severity and assessing upcoming disease exacerbations.
When looking at patients regarding their aerobic capacity, patients with VO2peak < 60% predicted showed about 80% more risk in developing a PEx during the following months in comparison to patients with VO2peak > 60% predicted. This is noted for the first time in literature and is of great clinical importance. Aerobic capacity is measured by a maximal cardiopulmonary exercise test with VO2peak—the amount of oxygen a person’s lungs absorbs during maximal exercise. Low aerobic capacity can be due to severe disease or deconditioning [21]. In CF, VO2peak < 60% predicted has been associated with poor survival [2,6]. The results of our study suggest that not only is low aerobic capacity is associated with worse prognosis but it can lead to more frequent exacerbations as well. In other words, the less fit a patient seems to be, the more prone to exacerbations he is. Hence, regular estimation of a patient’s exercise capacity helps identify those in danger of exacerbations. Even though the European Cystic Fibrosis Society recommends CPET as the gold standard method of assessing aerobic capacity, neither do all CF centers have CPET equipment nor can all patients undergo an exercise test periodically [22]. In this context, the findings of this study should not be considered as a mandate on performing CPETs but more as an encouragement to identify patients early on suspected of presenting low aerobic capacity. Even if CPET equipment is not available, other methods too [23,24,25,26] can allow for a rough assessment of a subject’s fitness levels. By recognizing patients with poor fitness, exercise interventions could be initiated. Preliminary data have shown that exercise training in CF patients can improve exercise capacity [16,27], whereas implementation of physical conditioning programs [16,28,29] along with escalation of medical treatment [30] can lead to avoidance of exacerbations. However, even though data on how physical training interventions can improve exercise capacity in CF have been published, there is a lack of evidence-based trials that substantiate these early findings [31], and future research should probably focus more to the merits of exercise in reducing exacerbation risk.
We observed that patients with 60 < VO2peak < 80% predicted at some points presented less possibility than those with VO2peak > 80% predicted, a finding that comes as a surprise and to our knowledge could not be attributed to anything. However, it must be noted that there is no statistically significant difference between the two as is to the first category of VO2peak < 60%.

Data from this 10-year single-center study show that VE/VO2, PetCO2, and VO2peak are significant predictors of pulmonary exacerbations in CF. Patients with low aerobic capacity present 4.5-times higher risk of developing a pulmonary exacerbation. CPET not only can provide data on mortality but also on upcoming exacerbations. The finding that lower exercise capacity is associated with an increased likelihood of exacerbation can prove of great help in everyday CF clinical care. In this context, motivating CF patients to maintain high fitness levels can lead to fewer pulmonary exacerbations and better quality of life.

The study was conducted according to the guidelines of the Declaration of Helsinki, and approved by the Institutional Review Board of Aristotle University of Thessaloniki Medical School IRB File No.: 3/2-5-2018.

We thank the patients with CF, and their families, for consenting to their data being included in the study. 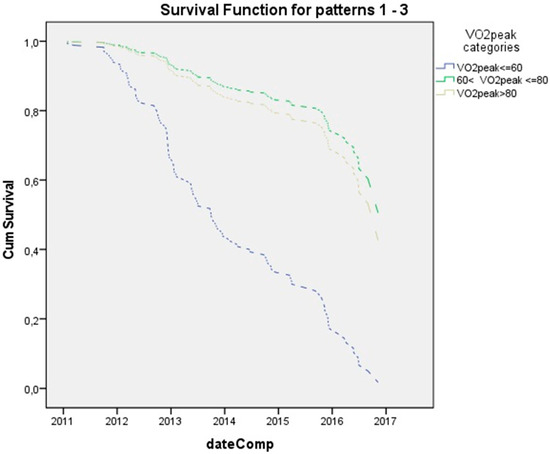 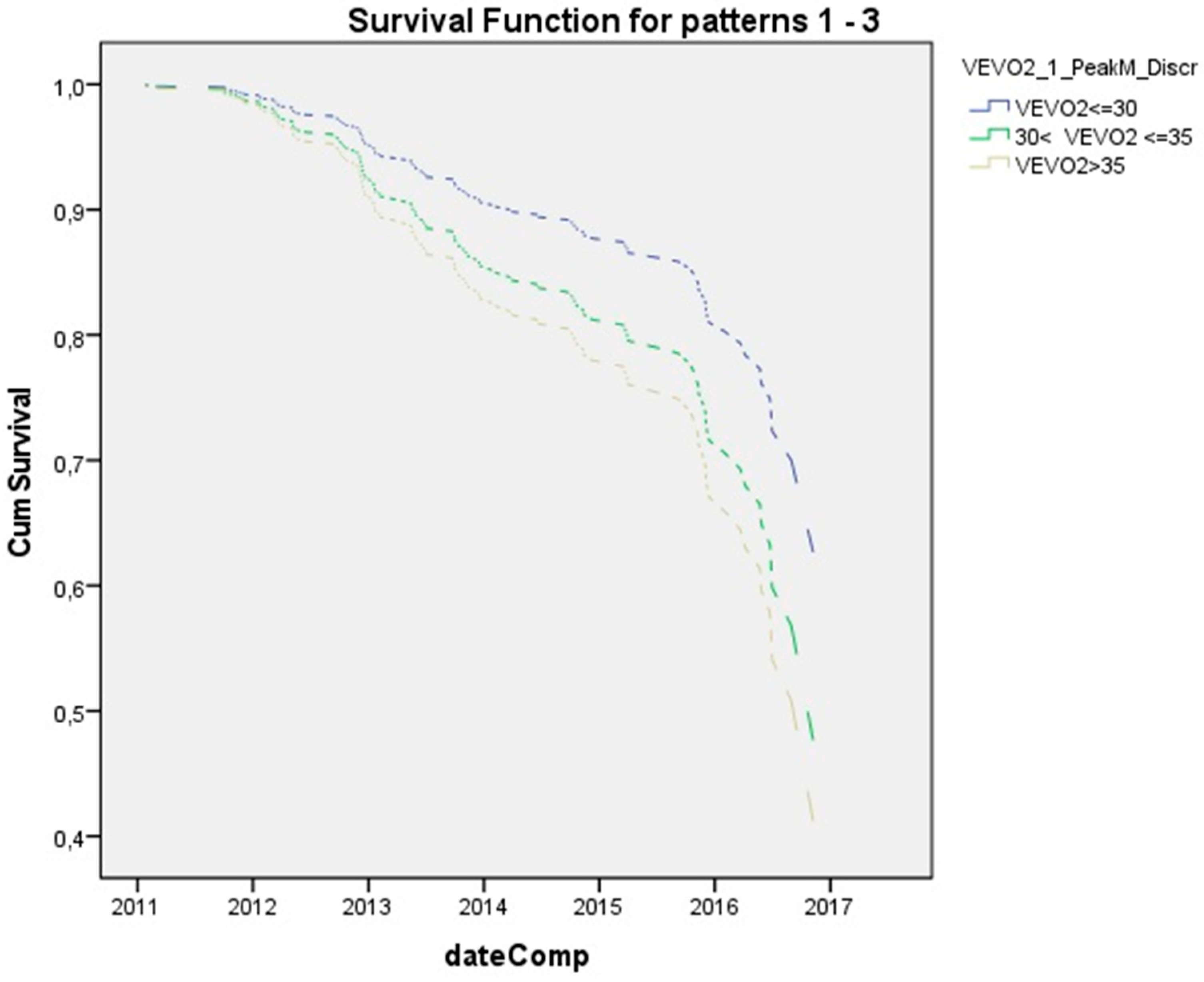 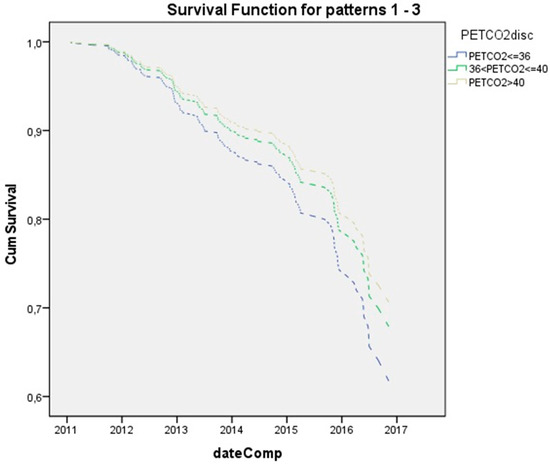