Pragmatic Markers in the Management of Asthma: A Real-World-Based Approach
Previous Article in Journal

Readiness to Change among Adolescents with Chronic Pain and Their Parents: Is the German Version of the Pain Stages of Change Questionnaire a Useful Tool?

Asthma and allergic rhinitis (AR) are frequently associated. The objective of the treatment of asthma and AR should be the control of symptoms and disease progression. Therefore, the combined measurement of disease control is desirable. In this regard, a questionnaire able to together assess asthma and AR control has been validated: the CARAT (Control of Allergic Rhinitis and Asthma Test). A further pediatric version (CARATkids) has been generated. The current real-world study used different disease control measures in children and adolescents with asthma and rhinitis. A total of 138 children and adolescents were recruited at three allergy centers. CARAT, CARATkids, ACT (Asthma Control Test), cACT (children ACT), GINA (Global Initiative for Asthma) disease control classification, VAS (Visual Analog Scale) for asthma and nasal symptoms, and lung function were used in all subjects. There was a predominance of males (67.4%) and asthma was well-controlled (according to GINA classification) in about half the subjects. In children, the median CARAT and cACT values were 5 and 22 respectively. In adolescents, the median CARAT and ACT values were 23 for both tests. There were significant differences between CARAT and ACT (p = 0.035) as well as between CARATkids and cACT (p = 0.0001). However, the tests’ outcomes were different as assessed in different domains. CARAT and CARATkids are disease-control measurements that give additional information to other tests, therefore, these different questionnaires to measure disease control complement each other. View Full-Text
Keywords: asthma; allergic rhinitis; control; children; adolescents asthma; allergic rhinitis; control; children; adolescents
►▼ Show Figures 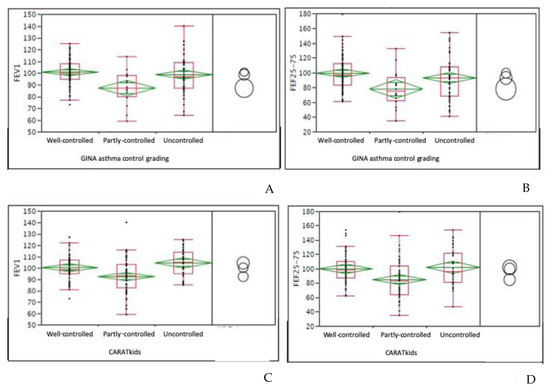