Data used in this study came from one of the data collection sites of a larger research project, the Canadian Assessment of Physical Literacy (CAPL). Following pilot-testing of the data collection protocol, the national CAPL research project was led by the Healthy Active Living and Obesity (HALO) Research Group at the Children’s Hospital of Eastern Ontario (CHEO) with several data collection sites across Canada. More details can be found from the CAPL website (www.capl-eclp.ca). Research ethics approval was obtained from the CHEO (protocol number: 13/202X) as well as St. Francis Xavier University (protocol number: 21990) and the school board from where the students were invited to participate.

Children in grades 3, 4, 5, and 6, and between the ages of 8 and 12 years were recruited from local elementary and junior schools. Following a letter of invitation given to potential participants in the school setting, parents/guardians provided written consent and the children themselves provided verbal assent at the time of data collection. If the child did not provide assent, this outweighed the decision of the child’s parent/guardian. As part of the informed consent, parents/guardians completed a ‘health check’ questionnaire to identify any medical conditions that might hinder their child’s participation in the physical tasks of the study (i.e., the Canadian Agility and Movement Skill Assessment (CAMSA) and other physical tasks not included in this study).

Data collection for this study followed a cross-sectional research design. Data were most often collected from participants during one school visit. For this study, data were collected using the Canadian Agility and Movement Skill Assessment (CAMSA) and a self-report questionnaire. This study required the assistance of several data collectors due to the large number of children participating at one time. All data collectors attended training sessions which included opportunities for practical experience with data collection techniques to enhance consistency among assessments. Where possible, the same person collected a particular component of the CAPL data collection.

To measure motor competence, each child completed CAMSA. Prior to the child beginning the CAMSA, the test administrator demonstrated how to complete the CAMSA twice to familiarize the child with it. During the first demonstration, the test administrator moved through the assessment slowly and completed every physical task perfectly while verbally describing the skill and emphasizing cue words. According to the CAPL protocol, the second demonstration involved the administrator completing the CAMSA as quickly as possible, while maintaining correct skill performance and accuracy to emphasize the importance of completing the course as fast as possible. Following this verbal and visual demonstration, each child completed the CAMSA. Following their practice, two trials were timed and scored by the test administrators. For a complete description of the CAMSA, please see the Canadian Assessment of Physical Literacy manual which can be accessed at www.capl-ecsfp.ca/capl-manual/.
Two data collectors obtained the CAMSA data. In addition to being the timer, data collector number one provided standard verbal cues for each skill for each child according to CAPL protocols to ensure the score and time reflected motor skill ability rather than memory. Data collector number two scored the child’s motor skill performance. Each child’s CAMSA performance was scored out of 14, with one point awarded for each skill performance criterion. These criteria were scored as 1 = done correctly or 0 = done incorrectly, with no part marks given. Time was converted into a score out of 14 and coupled with the skill score to provide a CAMSA score out of 28.

Part of the CAPL assessment involved the administration of a questionnaire to measure knowledge, understanding, motivation, and confidence towards physical activity [15]. Within this questionnaire designed specifically for the CAPL project, children were asked to compare themselves to others their age in regard to their motor skill performance. Specifically, the children were asked, “Compared to other kids your age, how good are you at sports or skills?” Response choices were on a Likert scale from 1–10, with 1 being “others are a lot better”, 10 being “I’m a lot better” and 5 or 6 indicating a “similar level of performance”.

To determine the relationship between actual motor competence and perceived motor competence, simple descriptive analyses were conducted. Average questionnaire scores were determined for participants in each grade (i.e., 3, 4, 5, and 6). Then, each participant’s self-reported or perceived motor competence score (i.e., 1–10 in response to “Compared to other kids your age, how good are you at sports or skills?”) was compared to his/her actual motor competence performance (i.e., CAMSA score) and the average CAMSA score calculated for all participants in their grade. Each participant was then given a rating of “underestimated”, “accurately estimated”, or “overestimated” depending upon the discrepancy, or lack thereof, of these measures.
When obtaining individual questionnaire scores, ratings of below average, average and above average were given to each participant. If participants responded with an answer between 1–3, it was interpreted that these children believed they possessed lower levels of skill compared to their peers and were given a rating of “below average”. A response of 4–7 was given the rating “average” and a response of 8–10 corresponded to “above average”. The same rating scale was used for participants’ levels of actual motor competence. If a participant’s CAMSA score fell within one standard deviation above or below their respective grade average, they were assigned the rating of “average”, if their score was below one standard deviation they were rated as “below average” and subsequently “above average” if their score was above one standard deviation.

Although there were 1162 participants from this data collection site for the CAPL project, for inclusion in this data analysis, participants required objective and subjective measures of their motor competence. In other words, they needed to have completed two trials of the CAMSA and answered the following from the questionnaire: “Compared to other kids your age, how good are you at sports or skills?” With this criterion, data were available for 1031 or 88.7% of participants with their grade distribution shown in Table 1.

For analysis in this study, individual CAMSA scores were determined from participants’ second trial composite scores (time to complete the CAMSA plus skills score). As per the CAPL manual, participants’ individual CAMSA scores were not averaged as there is potential for a learning effect when completed fewer than three times. The participants’ CAMSA composite scores were then averaged with respect to grade to determine the average score for participants according to grade.
Using the categorizations previously described in the statistical analysis section, the number of participants in each category according to grade for actual ability is presented in Table 2.
Using the categorizations previously described in the statistical analysis section, the categorization of the participants according to grade for perceived motor skills ability is presented in Table 3.
Based on the categorization of perceived and actual motor skill abilities, participants were then assigned a word combination which indicated if they over perceived, under perceived or accurately perceived their motor competence as shown in Table 4.
Following the assignment of actual perceptions, the percent of individuals in each grade who were categorized as ‘accurate’, ‘underestimate’ or ‘overestimate’ was determined. The number and percentage of students in each category according to grade are presented in Table 5.
A one-way analysis of variance (ANOVA) was then performed to determine if there was a significant difference between accurate, under and over perception groups in CAMSA performance. Since a significant difference (p = 0.000) was found, a Tukey post-hoc test was performed to determine where the difference existed. This post-hoc analysis indicated significant differences between participants that underestimated and accurately estimated (p = 0.15) their abilities as well as between those who overestimated and accurately estimated their abilities (p = 0.000). More specifically, participants that accurately estimated their abilities had, on average significantly lower CAMSA scores (20.1 ± 4.03) than children that overestimated (22.3 ± 3.47) their abilities and significantly higher scores than children who underestimated their abilities (17.1 ± 4.27). (See Figure 1).

The results of this study indicate that the majority of children are unable to accurately perceive their motor abilities even though their ability to accurately perceive their motor skill abilities increases with age. Participation in physical activity may be heightened if accuracy of motor ability perceptions is increased and negative perceptions are decreased given the potential connection between self-confidence in motor abilities and physical activity. As a society, we must ensure children possess the competence, confidence and knowledge about movement skills to obtain sufficient physical activity throughout life.

This research was funded by RBC Learn to Play Project through the Healthy Active Living to prevent Obesity group at the Children’s Hospital in Eastern Ontario. 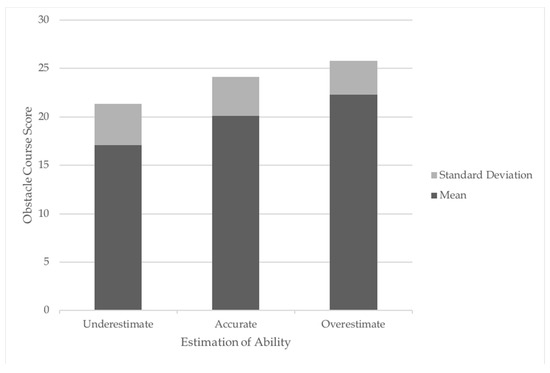 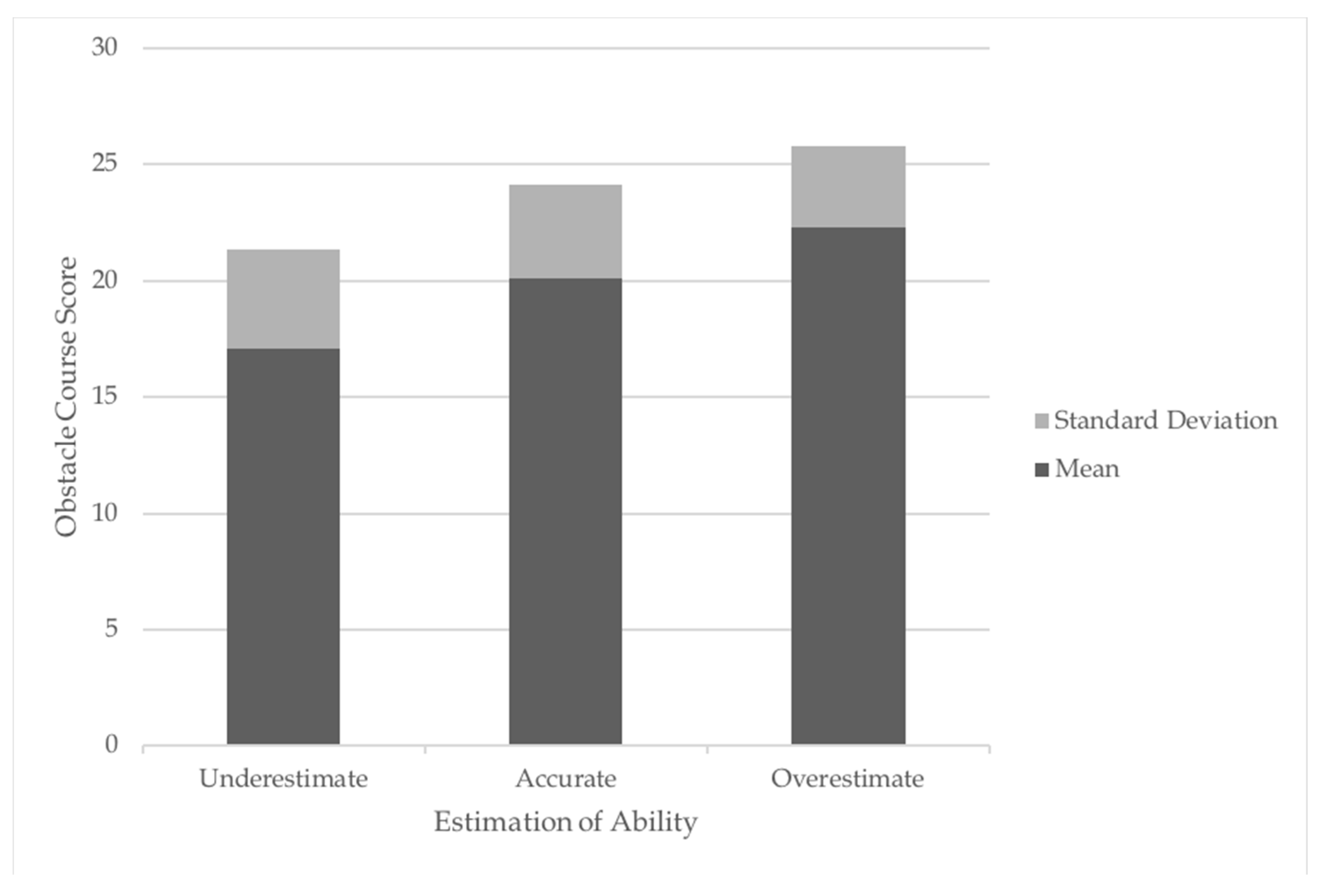