Key Challenges in the Search for Innovative Drug Treatments for Special Populations. Converging Needs in Neonatology, Pediatrics, and Medical Genetics

In 2011–2012 approximately 26% of Australian children aged between 5–17 years were reported to be overweight or obese. Furthermore, the increase in prevalence of overweight and obesity among US children parallels reported increases in energy intake and portion sizes of common foods, leading to the recognition that availability of larger portion sizes contributes to the rise in overweight and obesity prevalence. Thus, the aim of this time-series analysis was to investigate whether selected food portion sizes in Australian children aged 2–16 years changed between 2007 and 2011–2012. Portion size data from 24-h recalls collected in Australian nutrition surveys were compared between 2007 and 2011–2012. Portion sizes changed significantly in 23% of items with increases in 15% and decreases in 8%. Changes in portion sizes varied by age, sex, and food group. Changes occurred for many meat-based items, energy-dense, nutrient-poor food items, breads, cereals, and some fruits and vegetables. Vegetable and fruit portion sizes were below the respective serving sizes of 75 g and 150 g in the Australian Guide to Healthy Eating, while portion sizes of some energy-dense, nutrient-poor foods have increased. These findings suggest approaches to increasing consumption of nutrient-dense core foods and reducing energy-dense, nutrient-poor food items in children are warranted. View Full-Text
Keywords: 24-h recall; dietary intake; paediatric; portion size; time-series 24-h recall; dietary intake; paediatric; portion size; time-series
►▼ Show Figures 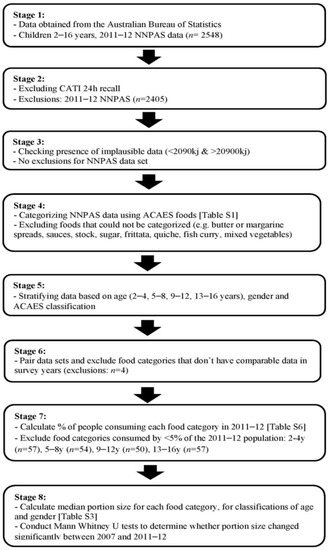